ELDRED – Lost in the headlines about who might be the leading contenders in the upcoming sectionals is a powerful story of unheralded progress. When former Eldred Coach and three-time Sullivan … 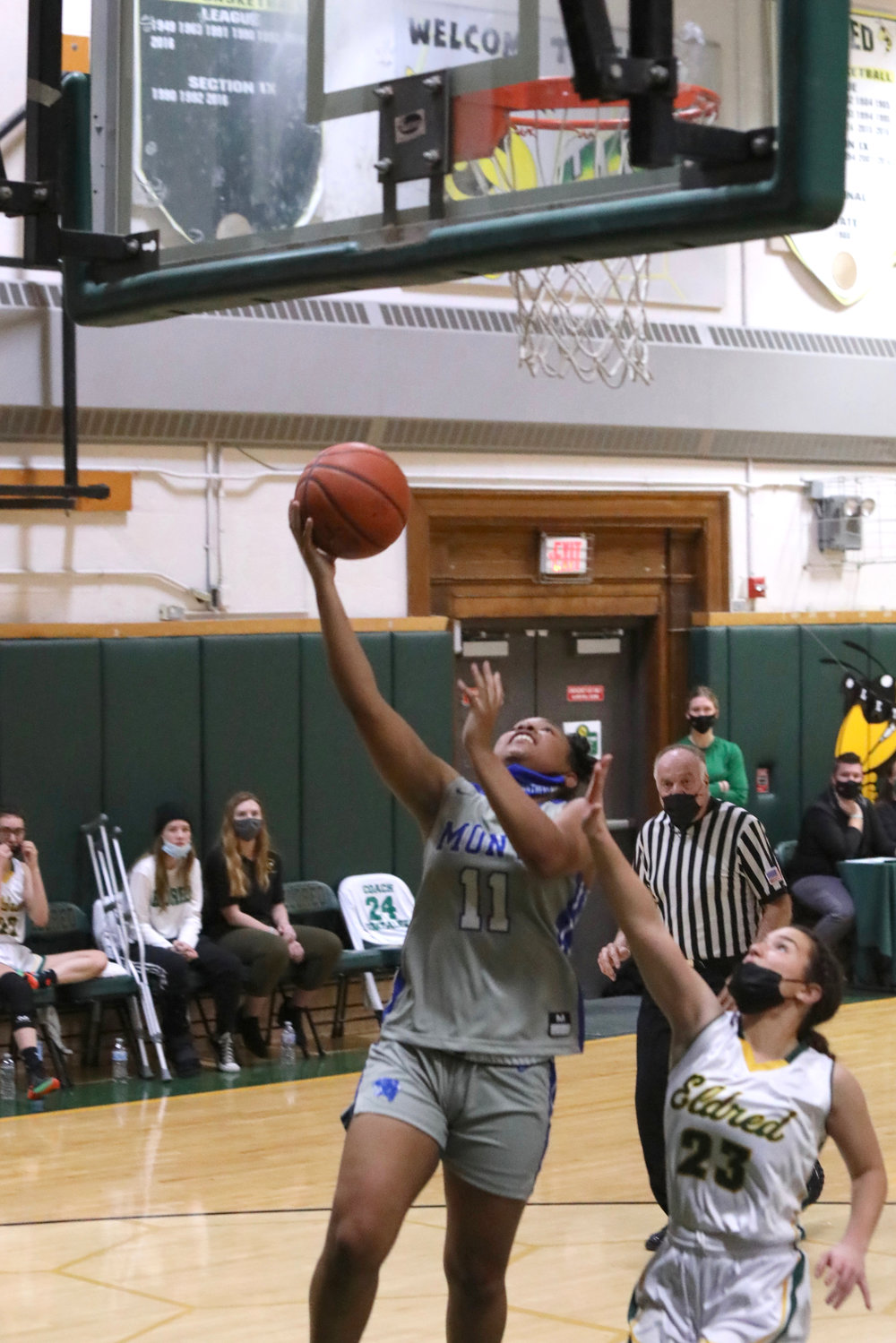 Monticello standout Aaliyah Mota completes a steal and elevates for two of her 18 points as Eldred’s Dana Donnelly closes too late to prevent the layup.
Richard A. Ross | Democrat 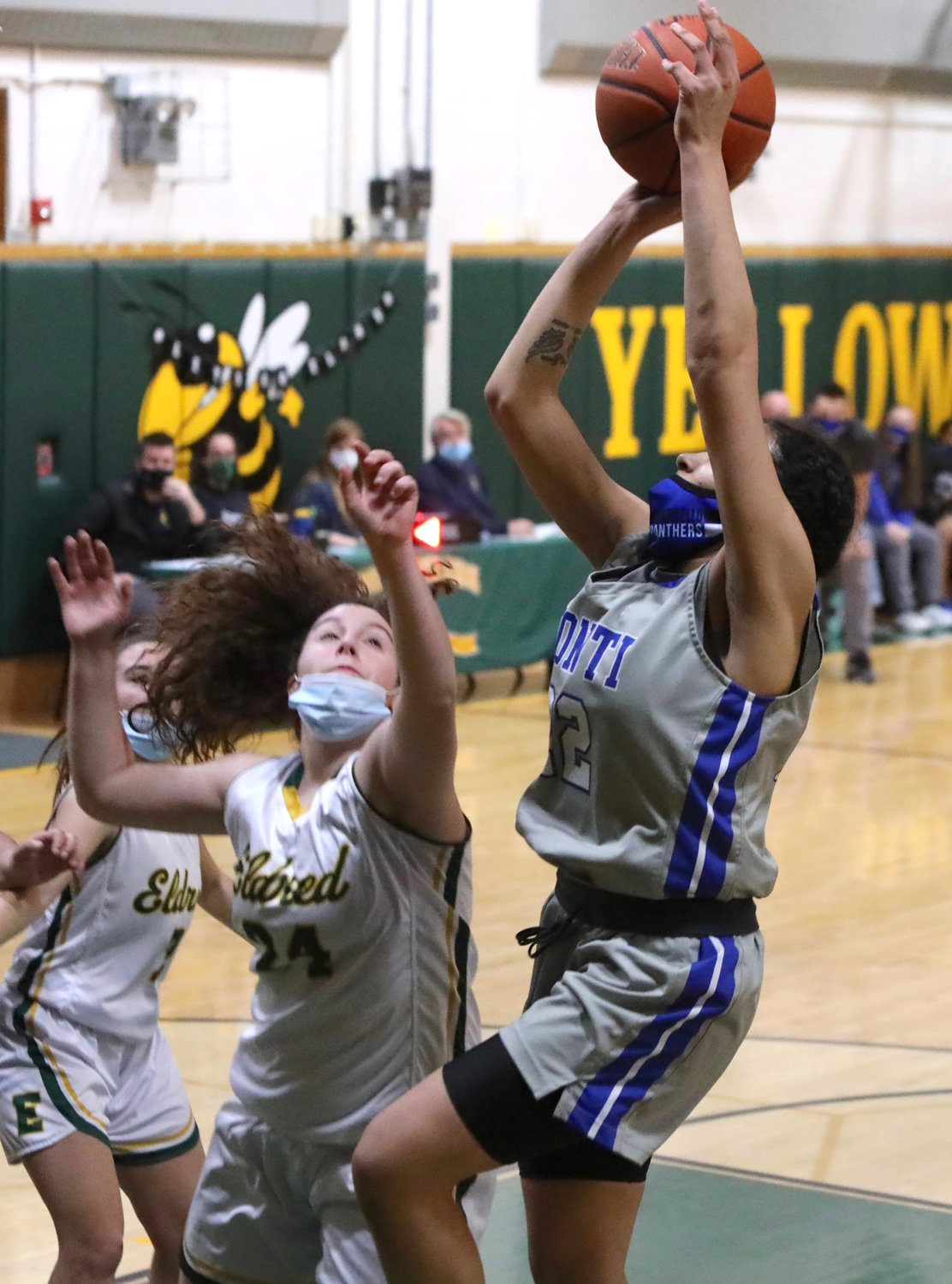 Monticello’s Shayla Smalls rises to the rim for two of her game-high 21 points as Eldred’s Lily Gonzalez defends.
Richard A. Ross | Democrat 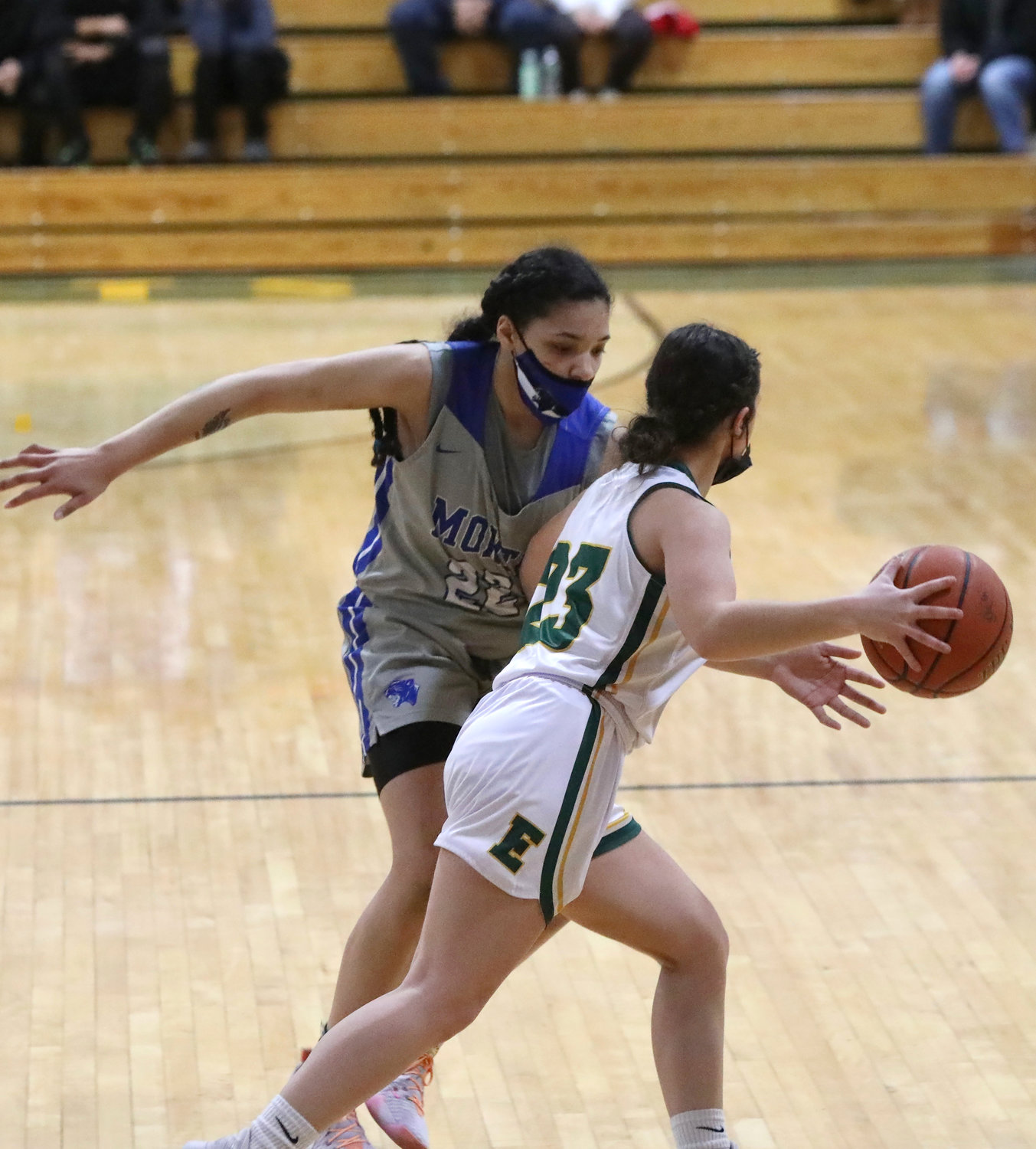 Eldred’s Dana Donnelly looks to dribble by Monticello’s Shayla Smalls. Monticello’s defense proved to be too much for Eldred which found its players often bottled up with not many good looks at the basket. Donnelly will have her moments to celebrate in her upcoming tour of duty on the mound in softball.
Richard A. Ross | Democrat
Previous Next
Posted Friday, February 25, 2022 6:20 am
Richard A. Ross

ELDRED – Lost in the headlines about who might be the leading contenders in the upcoming sectionals is a powerful story of unheralded progress. When former Eldred Coach and three-time Sullivan County Democrat Coach of the Year took over the girls basketball program in Monticello, it was literally a starting from scratch venture. For years the program had been marshaled barely any wins and showed no visible signs of getting any better.

Enter Jasper, not only a wizard of hoops x’s and o’s, but a great teacher and motivator. Given what he walked into, Jasper figured it would be at least five years before he could build a team to make sectionals in the challenging realm of Class A hoops. With the Lady Panthers’ dominating 55-27 win over Eldred in both teams’ last game of the regular season, the Montis improved to 10-10 overall and punched their ticket to the dance. Like Cinderella, they will finally get to go to the ball. But unlike the storied heroine, there will probably be no glass slipper. That said, reaching the sectionals in four years instead of Jasper’s predicted five is awesome in and of itself, especially given the fact that last year when the team hardly played, counts as one of those four years.

This was the second time Jasper’s team triumphed over his former protégé Jordan Lepes, who took over the Lady Yellowjackets after the tragic untimely death of Coach Christopher Gonzalez. Jasper’s former stars seem to be still shining, now in the coaching realm. Alaina Gaughan is the modified girls basketball coach at Port Jervis. Sheila Burns is Jasper’s assistant and JV Coach. Sammy Clemons is coaching modified basketball at Eldred. If we could only borrow Kelsey Collins from her nursing aspirations, it would be a complete graduation to coaching fame for the former Lady Yellowjackets superstars.

Clearly, the Jasper tree is growing in the coaching sphere, as well as in his family with a little girl on the way. The baby makes three kids, and a family of five Jaspers.

Monticello, with its height and quickness, bolted out to a 14-6 lead by the end of the first quarter, but Eldred battled back in the second stanza, outscoring the Montis’ 12-8 to close the gap to 22-18 at the half. But with the fine play of Shayla Smalls (21 points in the game) and standout Aaliyah Mota (18 points), the Lady Panthers capitalized on great defense and fine shooting to put up 18 and 15 in the second half periods to Eldred’s two and seven, thus marshaling the win amid smiles and hugs. Free throw shooting was far from exemplary from either team with Eldred shooting a dismal 4-for-13 (30%) and Monticello canning only 10-of-25 (40%).

With Livingston Manor’s win over Chapel Field, a Class D final matchup between the Lady Yellowjackets and the Lady Wildcats is on the docket. Monticello will probably travel to Cornwall. Softball is coming and for Eldred that means the highlight of the year with its sterling battery of Dana Donnelly and Lily Gonzalez and fine play all around the horn and in the outfield.

It should be an exciting spring. But for the next week basketball is still center stage. For both Eldred and Monticello, it has been a season of progress.