A Highland History Hike at The Minisink Battleground

One of the deadliest battles of the Revolutionary War was fought on a desolate hilltop just north of present day Barryville on July 22, 1779.

In terms of the percentage of men killed in relation …

A Highland History Hike at The Minisink Battleground 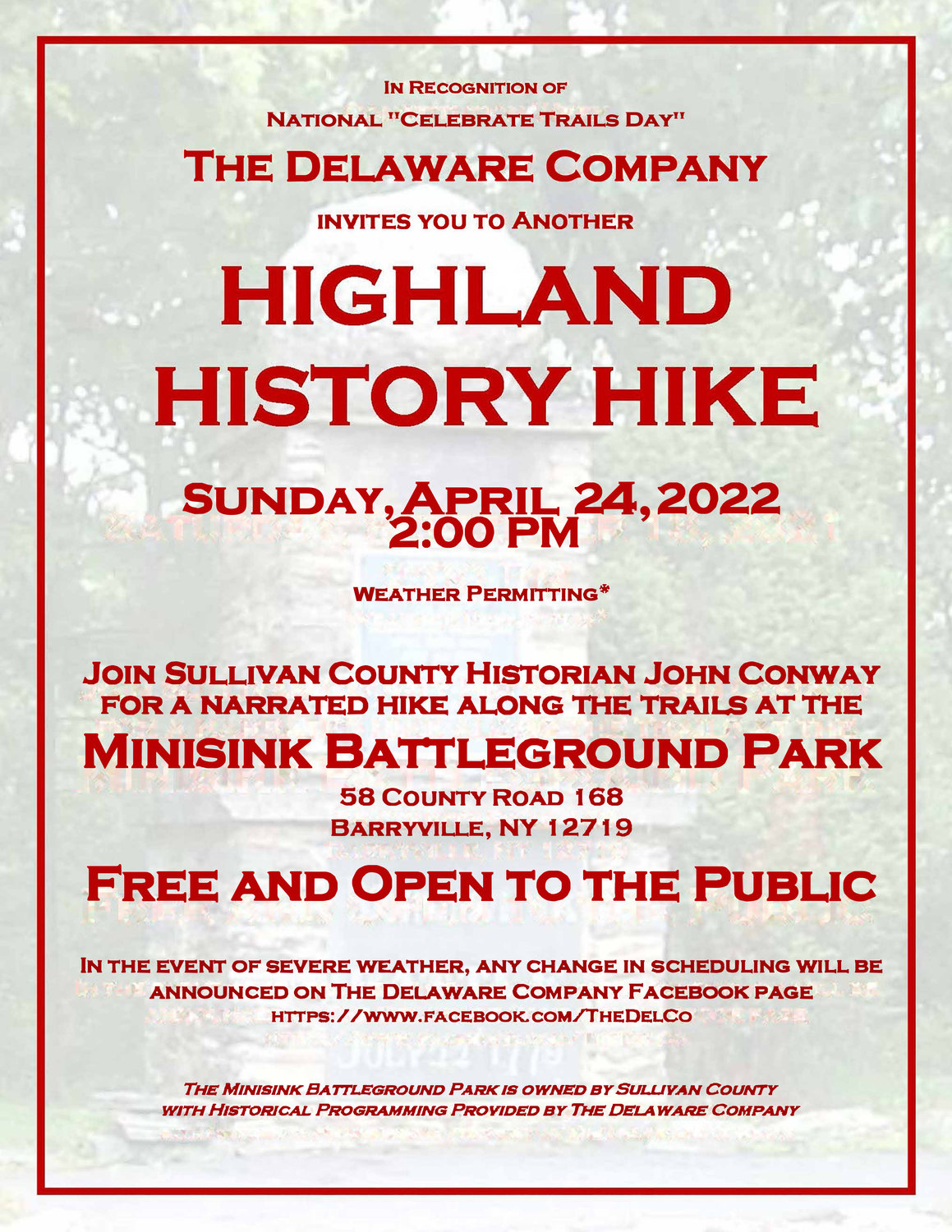 One of the deadliest battles of the Revolutionary War was fought on a desolate hilltop just north of present day Barryville on July 22, 1779.

In terms of the percentage of men killed in relation to the number who took part, few battles in America’s War of Independence were as bloody as the Battle of Minisink.

The battle pitted the enigmatic Mohawk Joseph Brant and his band of Iroquois and Tories against contingents of the colonial militia under the command of Lt. Colonel Benjamin Tusten of Goshen and Colonel John Hathorn of Warwick.

Two days before, Brant and his men had raided and plundered the settlement at Pienpack, burning the homes, killing the men and dispersing the women and children. They gathered up what livestock and provisions they could, taking their bounty and returning northward, along the Delaware, on their way back to the headwaters of the Susquehanna.

Word of the raiding party soon reached Goshen, where the call went out for the militia to gather under Tusten’s leadership. After hotly deliberating the merits of engaging Brant and his men in combat, Tusten, a brilliant young medical doctor, and his militia – merchants, farmers and clerks, and what historian James Eldridge Quinlan later described as "some of the principal gentlemen of the county" – set out the next day in pursuit of their quarry.

Tusten’s command was soon bolstered by a contingent of militia from Warwick under the command of Hathorn, and they finally confronted Brant on the banks of the Delaware, where an epic battle ensued resulting in a resounding defeat of the colonials, 46 of whom were killed that day.

Both sides expended their ammunition quickly, and the fight devolved into hand-to-hand combat in the brutal heat, with the Natives and Tories getting much the better of it. Dr. Tusten set up a crude field hospital in the relative shade of a large bluestone outcropping, and attempted to treat those who were wounded. Ignoring a retreating Hathorn’s command that it was “every man for himself,” Tusten remained true to his oath, refusing to leave, staying behind with the 17 wounded men. All were killed.

The bodies of the brave patriots who gave their lives that day were left on the battleground for 43 years before what remained could be gathered and buried in Goshen in a solemn ceremony in 1822. That postscript alone makes the Minisink Battleground, now owned and operated as a park by Sullivan County, hallowed ground. Still, there is one place within the park that is generally considered more hallowed than the rest.

It is the place where Tusten and the wounded men fell under the tomahawks of Brant’s men, and is known today as Hospital Rock.

The story of Hospital Rock is just one of many to be discussed when this columnist, your Sullivan County Historian, leads and narrates the Highland History Hike along the trails at the Minisink Battleground on Sunday, April 24. The hike is sponsored by the Barryville based non-profit history education group, The Delaware Company, which beginning this year is providing programming at the Park periodically throughout the season. The hike is being staged as a one-day-late commemoration of national “Celebrate Trails Day,” as designated by the Rails to Trails Conservancy. It begins at 2 p.m., and it is free and open to the public.

Participants will learn not just about the Battle of Minisink, but also about the Cushetunk settlement, established by a group of Connecticut families in the 1750s and stretching for 30 miles along the Delaware River. The residents of Cushetunk were deeply divided during the Revolutionary War years, and the stories of the enmity that developed and the atrocities committed by both sides as a result of those feelings are astonishing. There will also be stories about the Munsee, the branch of the Lenape tribe who inhabited the region prior to the arrival of the Europeans, and of the timber rafting industry that made some of those European settlers wealthy men.

For more information about The Delaware Company and for updates on programming at the Battleground, visit the group’s website, thedelawarecompany.org.

John Conway is the Sullivan County Historian. Email him at jconway52@hotmail.com. He will be leading and narrating the Highland History Hike on Sunday, April 24 at 2 p.m. at the Minisink Battleground Park, 58 County Road 168 in Barryville.