Alan Samuel Berg, of Summitville, New York passed away on February 7, 2021 at the VA Hospital in Montrose, NY after suffering a stroke on October 21, 2020. He was 73 years old. 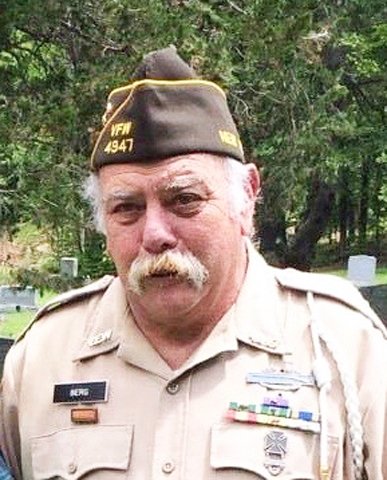 Alan Samuel Berg, of Summitville, New York passed away on February 7, 2021 at the VA Hospital in Montrose, NY after suffering a stroke on October 21, 2020. He was 73 years old.

He was born on July 20, 1947 at Veterans Memorial Hospital in Ellenville, NY to his parents Nathan and Helen Sokolow Berg. He grew up in Summitville and attended the one room schoolhouse in Summitville until 6th grade, when he then went to Ellenville School. He graduated from the Ellenville High School in the class of 1965.

Alan served in the US Army First Air Cavalry from January 1967 through January 1969. After his tour of duty in Vietnam, he spent his last year of service doing Military Escorts. He did a total of 26 funerals, escorting departed soldiers to their final resting place. He always said that it was the best and worst job he ever had. He saw active duty in Vietnam and was awarded two Purple Hearts in October 2004, in addition to the Air Medal for flying over 200 air transports to unsecured landing areas. The ceremony was held at the Sullivan County Courthouse, and Congressman Maurice Hinchey awarded the medals after a 25-year delay. He stated after the award ceremony, “Never forget, there's still people unaccounted for. I was lucky, I came home. Others didn't. So, until they're all accounted for, let us never forget.”

Alan worked for the United States Postal Service from 1968 through 2004. He started his career as a Letter Carrier in the Ellenville Post Office and eventually became a Supervisor, then Officer-in-Charge for various offices: Arlington Branch of the Poughkeepsie Post Office, Bloomingburg, Jeffersonville, Walden, and New Windsor; before becoming Postmaster of the Kauneonga Lake, NY Post Office in 1993 where he retired after 37 years. He was active in NAPUS (National Association of Postmasters of the United States), holding many offices over the years.

Alan was a member of the Ellenville Elks Lodge #1971 and was always involved in their functions. You would find him in the kitchen cooking for a Friday night dinner or for the events held at the Lodge. He received the Ellenville Elk of the Year two times for his dedication: 2012-2013 and 2016-2017. Alan became involved in the VFW and was a member of the Andrew Brucher Post 5499 in White Lake while he was still working, and then became member of the Edward Maier Memorial Post 4947 in Wurtsboro. He again was a fixture in the kitchen cooking for the community breakfasts, chicken BBQ, and the monthly meetings. He was always present at the coin drops and selling tickets for the Veterans Day raffle. As an extension of the VFW post, Alan became involved at the County level with the Sullivan County Veterans Coalition. He took part in the Sullivan County Honor Guard to honor all fallen heroes in Military Honor Funerals and became the bugler. Alan was also a lifetime member of the Summitville Fire Company.

He always loved the outdoors being a member of the Outcast Bassmasters, having caught the lunker bass in many tournaments. He was also involved in hunting clubs such as the Atta Boys and being a lifetime member of the Ulster Heights Rod and Gun Club. In his younger days, Alan was an avid softball player and later went on to coach a women's team for the first year of the Ellenville Women's Softball League.

Alan is survived by his wife of 48 years, Danielle Lipton Berg, at home. He is also survived by his son, Nathan and companion Jamie Bandelt of Mount Gilead, NC; daughter Andrea, and her son Adam, both of Summitville; his cherished grandchildren, Hannah and Jacob; sisters-in-law Arlene Getz and Monique Lipton Hogan; many nieces and nephews; his extended family of The Murray, Rose and Wells families; and a huge circle of friends. He was predeceased by his parents Nathan and Helen Sokolow Berg; his brothers Lawrence Getz and Arnold Getz; sister-in-law Esta Getz; nephew Andrew Getz; nieces Ileen Getz Grinnell and Debra Getz; and cousin Sharon Feinman.

Visitation will be held on Thursday, Feb 11, 2021 from 4-7pm at the VanInwegen-Kenny Funeral Home, 111 Sullivan Street in Wurtsboro. Services will be held on Friday, Feb 12, 2021 at 11am at the funeral home, followed by a graveside ceremony and burial at the Bloomingburg Rural Cemetery. Due to our current health crisis, social distancing guidelines must be met - a limited number of people at one time will be allowed in the funeral home, and facemasks are required. Because of these current restrictions, the family will host a memorial gathering in the spring, where everyone will be welcomed to share stories, memories, and good food.

Arrangements under the direction of the VanInwegen-Kenny, Inc. Funeral Home of Wurtsboro. For additional information or to send an online condolence, please visit www.kennyfuneralhome.com.