August 6 - Faithful readers of the Kenoza Lake news know that almost every summer, the Otto household winds up with some type of animal or bird, making frequent appearances at our Pucky Huddle Road … 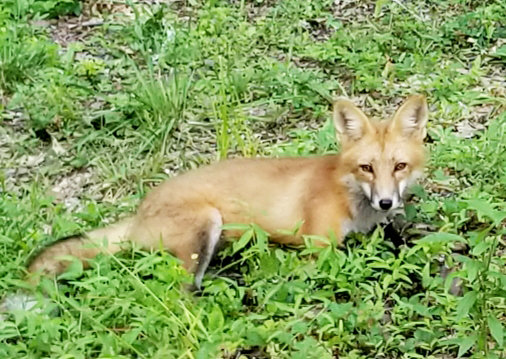 This year, we had red foxes at the Otto household. Here is one of the pups that we have named Blondie. Blondie has gotten friendly and even posed for a picture.
Contributed Photo
Posted Friday, August 6, 2021 7:00 am
Susan Brown Otto

August 6 - Faithful readers of the Kenoza Lake news know that almost every summer, the Otto household winds up with some type of animal or bird, making frequent appearances at our Pucky Huddle Road residence, that I write about.

I am a serious recycling person, and we have a healthy compost pile for our table scraps (that I use to create healthy dirt for my flower beds and pots.) Eventually, a critter discovers the compost pile and soon, we get a repeat wildlife visitor to the compost pile (unless the crows discover the scraps first).

A few years ago, we, of course, had Rudy, the orphaned, rescued baby raccoon, who grew up and returned for at least three years. (Not sure if he is still around or not. Rudy tended to make more of an appearance in the fall, as he was putting on the pounds for winter months.)

We have this scampy small skunk who likes the cat food. Kind of friendly, rarely sprays and is fun to watch as he bounces up the hill. We have two mother turkeys with nine poults. They have been around most of the summer, as they have discovered some of the bird seed that gets knocked out of the bird feeder by the blue jays.

For a few summers, we had a gray fox named Fred. He made frequent summer evening appearances and then come September, he would vanish. Last year and this year, no gray foxes, however, we had red foxes.

Back in May, right around the time the fawns were born, three baby red foxes were living right across from the Otto household driveway, in the culvert pipe of our neighbor Phyllis Walters. The parents seemed to go out hunting and would shuttle food to the pups. The pups hung out right on the road! One time I found a fawn leg by the den entrance, right at the time that fawns were being born. Mother nature can be so cruel.

So over time, the red fox parents seemed to have disappeared as did one of the pups and instead, there were two pups left. One red fox with a large white tip on her tail, whom we named Blondie, (as her coat was kind of blonde) and her brother, who we call Donny.

We are not sure of their sexes, just what their behavior is seems that Blondie is the female and Donny the male. They come and go. Sometimes we don’t see them for a couple of days or so. Over time, Blondie has gotten friendly and will even pose for a picture.

My husband Ray and I have three wren houses on our front porch. This year we had a pair set up house in the wren house that the late Cliff Horton made. Most years the wrens have two batches of babies but this year, only one batch. The Canada Geese are done molting and are on the move.

The red-winged blackbirds and barn swallows are still around. As it is August, I am on the lookout for the Great Egret who normally pays us a brief visit, either at the Albert Thony farm or on Kenoza Lake, at the former Mouthrop residence.

Earlier this week, I set the alarm clock for 4:45 am and watched live on my computer, Simone Biles compete in the one Olympic event that she ended up competing in. I was very happy that she did that and that she won a medal. In my humble opinion, she made a very brave decision to withdraw from the other Olympic events. I thought that if she didn’t compete in at least one event, that this decision could haunt her for the rest of her life. I was never a gymnast.

I don’t know what the “twisties” are but it sounds reasonable that someone could get them and that one could die or be injured from them.

While watching Simone Biles, I was reminded of one of the best songs ever written and that song about the Olympics was Whitney Houston’s ONE MOMENT IN TIME, that was the official song of the 1988 summer Seoul, South Korea Olympics.

If that song doesn’t inspire you, I don’t know what song does. Check out the official VEVO video on You Tube with Whitney Houston singing. Turn up the volume as loud as you can and watch it until the end. I am sure you will have a tear or two in your eyes.