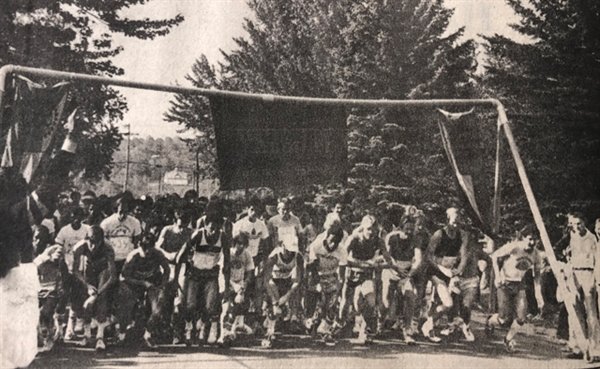 The gun is up and the runners are ready for the third Annual Monticello Rotary Run-a-Thon held Sunday for the benefit of the Sullivan County Special Olympics. After a tough 6.2 mile run through the streets of Monticello, Jeff Bake of Montgomery and Missy Iatauro of Grahamsville were the top men and women's finishers.
Democrat File Photo by Frank Brownell
Posted Monday, September 14, 2020 12:00 am
By Jan Cheripko

MONTICELLO - On a warm Indian summer day close to 200 runners lined up on Fraser Road in Monticello for the third annual Run-a-Thon sponsored by the Monticello Rotarians for the benefit of the Sullivan County Special Olympics.

A steep hill greeted the runners right at the start of the 6.2 mile course which wound its way around the Concord golf course and then back down Hammond Street toward the finish. And when the runners took the turn from Pleasant Street toward the finish line it was Montgomery's Jeff Baker leading the pack and crossing the tape in 34:29. Grahamsville's Missy Iatauro, Tri-Valley's girls cross country coach was the first woman to finish.

According to Bob Paglia, who along with Harris Alport chaired the event, the Rotarians expect to far exceed the $4,500 raised last year for the Sullivan County Special Olympics.

“We won't have the money, (which was raised by registration fees and sponsorships for the race) counted for at least a week. But I think we might be around $6,000 or $7,000 this year. Maybe even more,” said Paglia.

Gerard LaGrande won the 14 and under boys competition. Kevin Rumsey took the 15-20 age group run. Callicoon's Alex Pradere, who is Delaware Valley's top runner, finished second in his age group behind Rumsey and third overall in the race.

Frank Giannino, who is a cross country columnist for the Times-Herald Record and who twice set the cross-the-United States running record, said he was very impressed with Pradere.

Giannino, who is coming off knee tendinitis and finished fifth in the race said, “We were running evenly and I told him that he was very relaxed and to take off. He's a very good young runner who should do well in Section 9 competition.”

In the female competition Geraldine Masterson of Liberty took the under 14 race, Elizabeth Klein won the 15-20 division. Iatauro won the 21 to 35 race and Renata VanBurren was first in the 36-49 run.