LIVINGSTON MANOR –– The Bears traveled to the home of the Wildcats on Tuesday night to tip off the season with some non-league action. Tri-Valley had their foot on the gas early and never … 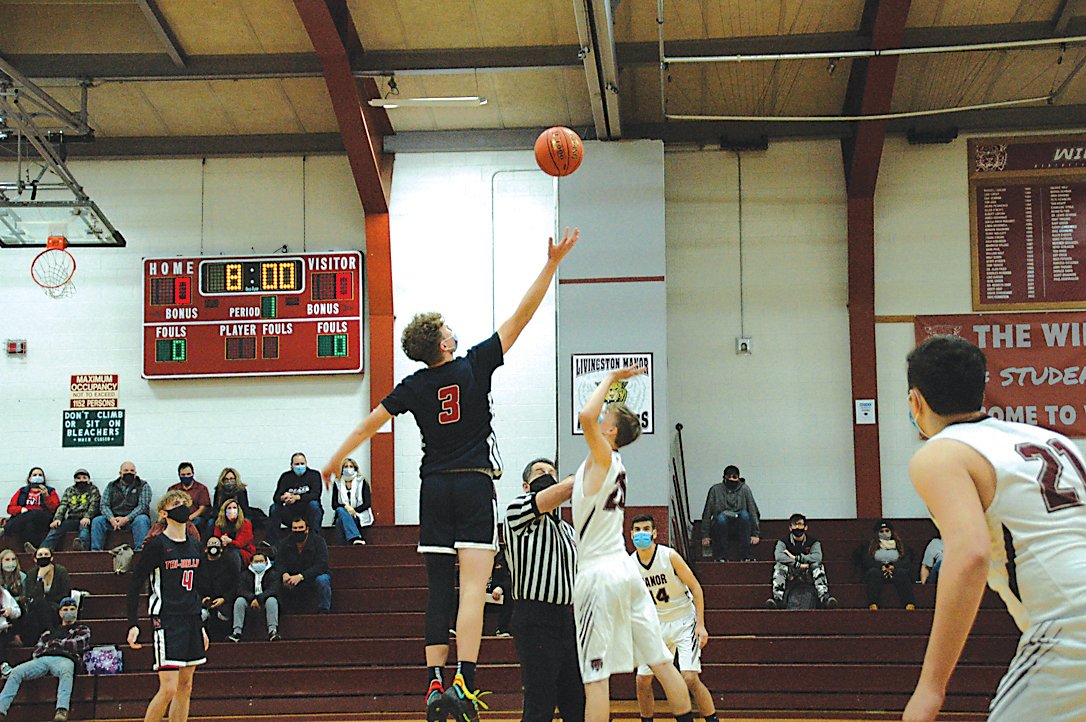 Andrew Cox reaches all the way up to win the opening tip. Cox had 17 points in the first half of Tuesday’s game and helped to secure the 28-point win over Livingston Manor.
Anthony Morgano | Democrat
Posted Friday, December 10, 2021 6:20 am
Anthony Morgano

LIVINGSTON MANOR –– The Bears traveled to the home of the Wildcats on Tuesday night to tip off the season with some non-league action. Tri-Valley had their foot on the gas early and never took it off, defeating Livingston manor 59-31.

Andrew Cox led all scorers with 17 points, all of which were scored in the first 13 minutes of the game before he was sidelined for the remainder of the game with an injury. Cox netted five 3-pointers before coming out of the game, largely contributing to the Bears’ 14-point halftime lead.

Picking up where they left off at the end of the first half, Tri-Valley put up 21 points in the third, outscoring Livingston Manor by 16 in the quarter and increasing their lead to 30 to start the fourth quarter.

The two teams combined for just 14 points in the final quarter, and Tri-Valley opened their season with a huge non-league win on the road.

Kevin Delaney, Tri-Valley’s coach said, “It was nice to get back in the flow of things and play in front of fans again after last year’s shortened season.”

“We played fast and we played well, which is one of our goals for the season. We were able to cycle through guys without much of a drop off. We are hoping to continue to play like this all season long.”

The 1-0 Bears have Chapel Field on the schedule next, Monday night in Grahamsville.