LAKE HUNTINGTON - When all was said and done, Chris Campanelli’s choice to attend NCJCAA Division One Lackawanna College was an easy one. “It’s a better program than all the other … 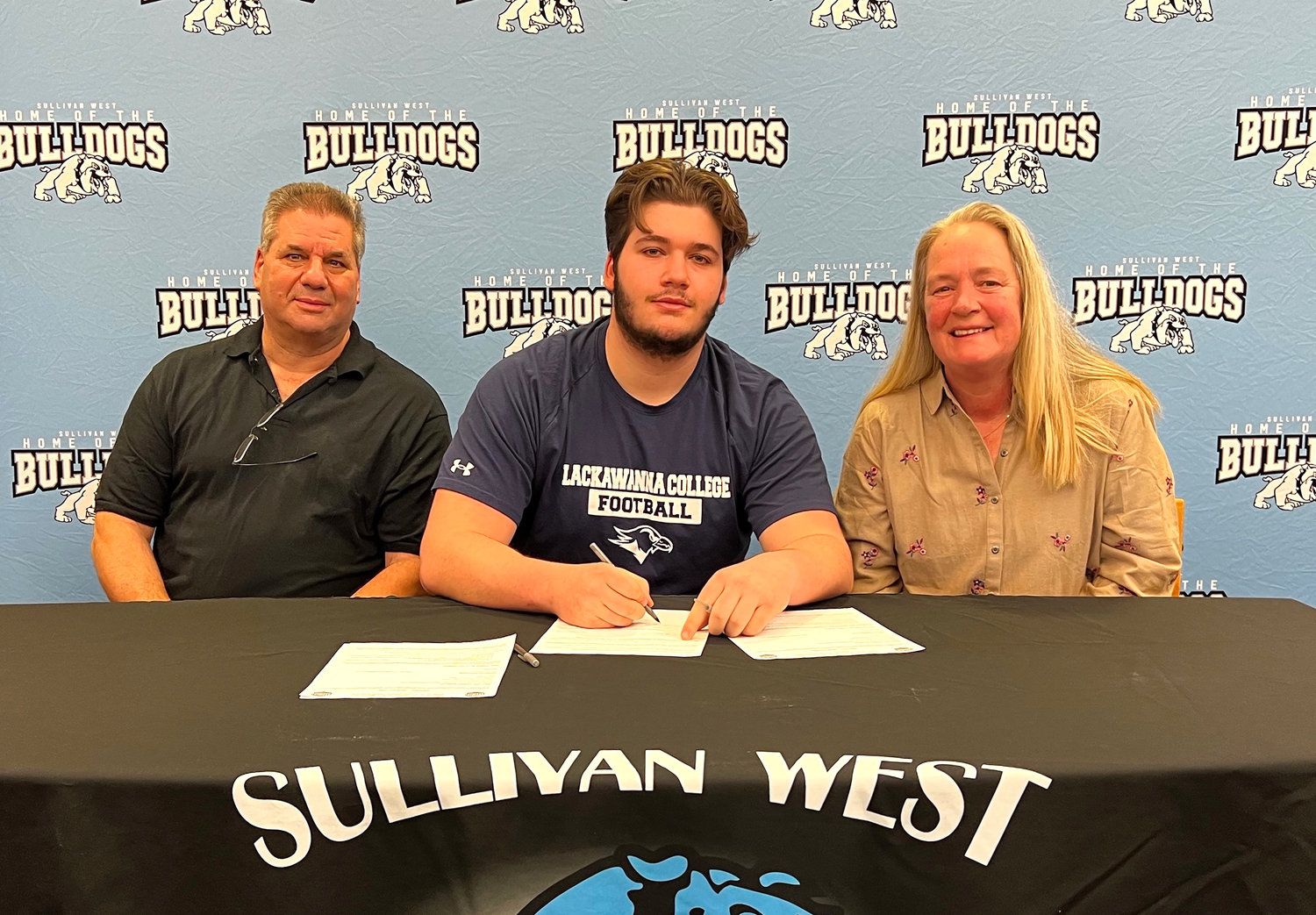 Sullivan West’s Chris Campanelli signs a NJCAA Letter of Intent to attend Division I Lackawanna College to play football. He is flanked by his father Tony and his mother Deborah who look on with pride.
Richard A. Ross | Democrat 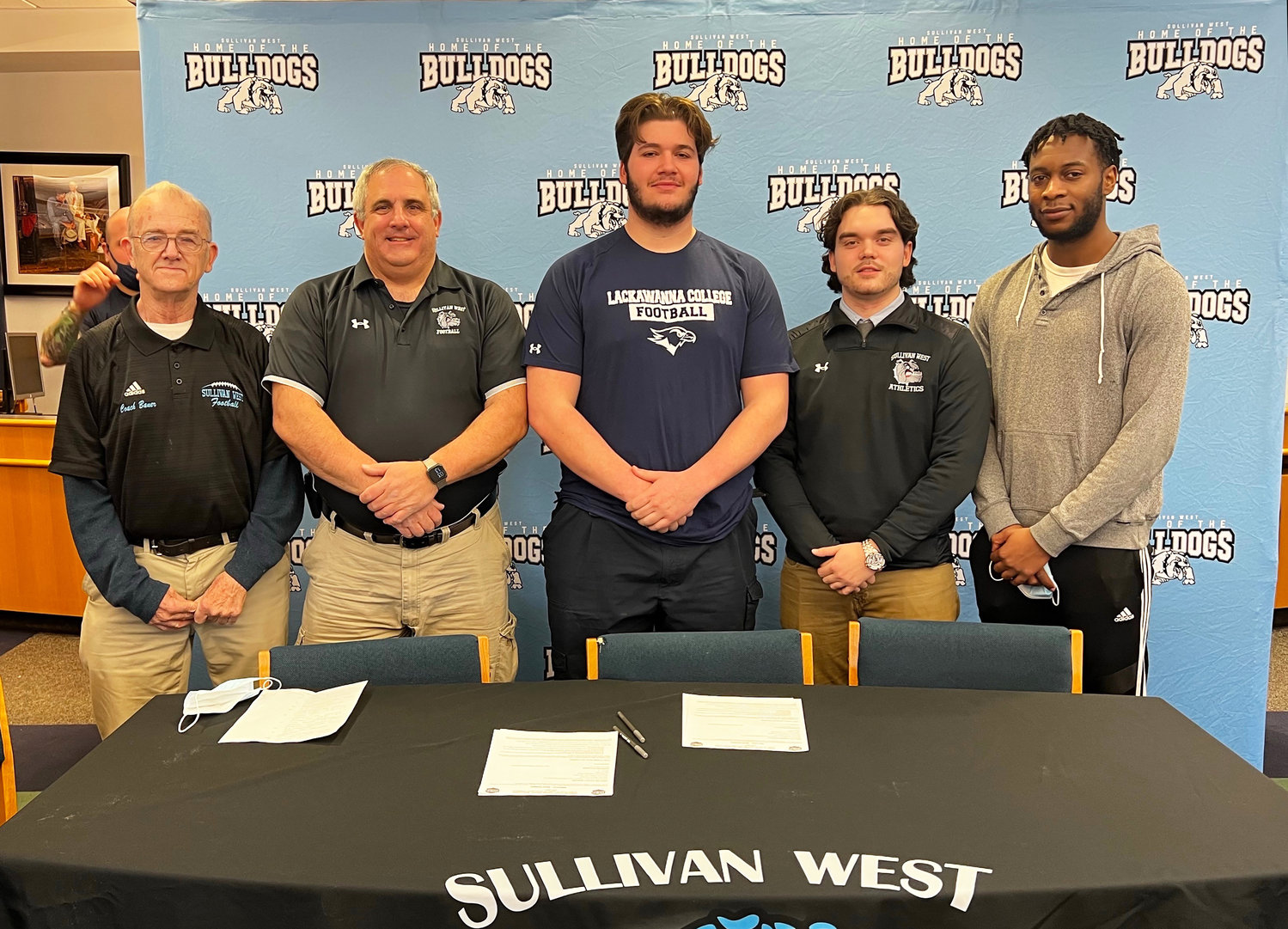 LAKE HUNTINGTON - When all was said and done, Chris Campanelli’s choice to attend NCJCAA Division One Lackawanna College was an easy one. “It’s a better program than all the other choices. It’s a steppingstone college that my family and I are more comfortable with my attending. They have a great criminal justice course of study and a proven football program,” Campanelli noted. The Falcons envision him playing on the offensive line but will test him further to see if a defensive line slot would be more suitable. Lackawanna is noted for sending players to Division I schools.

SW Athletic Director David Eggleton got the signing ceremony started by summarizing Campanelli’s storied contributions to the track, basketball and, most importantly, football programs during his high school tenure. He is a six-year veteran in track in the weight throw, discus and shot put and occasional relays. He has been on varsity basketball for four years playing forward and center and has leant his time to the Town of Callicoon Youth Basketball Program.

His football resume is legendary. It includes a six-year tour of duty with four on varsity, team captain, helping the team to a Section IX Eight Man Football Division Championship and the #1 seed in the title game in which he was named Defensive MVP. He was named to the NYS first team All-State Eight Man team and first team Section IX eight-man team. He was the Sullivan County Democrat Co-Player of the Year along with teammate and co-captain Gavin Hauschild. He was Varsity 845 second team all-section defensive lineman, Section IX eight-man football Lineman of the Year and a participant in the Exceptional Senior Bowl which he impacted greatly.

Chris was also an individual Scholar Athlete for the Fall 2021 season, and will receive the same honor this winter. He has been enrolled in the Sullivan County BOCES Career and Technical Program for Public Safety, and has served as a superb role model for the younger Bulldogs. Head football Coach Ron Bauer spoke glowingly about Chris recapping his accomplishments, including his off-season work with seven-on-seven play and hours of work with Cortland’s coaching staff. Bauer referred to Lackawanna as a really good school and praised Head Coach Mark Duda. Bauer encouraged Chris to work hard and follow the program. Bauer’s advice, “stay positive and enthusiastic.” Assistant Coach Justin Diehl noted that in his time of coaching he has never seen a more dominant player. He expressed the coaching staff’s pride. He quipped that whenever the team was in a jam it was comforting to know that the 6’5 320-pound lineman would lead the blocking charge in SW’s powerful running offense.

On a zoom presentation, Lackawanna Assistant Football Coach Josh Pardini said the Falcons were looking forward to the chance to help Chris get stronger and to further his knowledge of how to play the game. “We’re curious to see how focusing on just football will hopefully help him climb that ladder to success.”

Lackwanna has sent 12 players to D-1 schools including Penn State, Delaware State, Missouri State, University of New Mexico and more. Three Falcon alums are currently in the NFL. Though the actual signing was weeks ago on National Signing Day, Chris put his pen to a copy of the document while his dad, Tony, and mom, Deborah, looked on with pride. He was joined for photos with his family including his brothers Gabe and Nick and then others with the coaching staff and friends. We at the Sullivan County Democrat extend our congratulations to the “Big Fella” and wish him unbridled success going forward.