Easter weekend dawned to sunny skies on Friday morning; beginning with the cheerful sounds of the songbirds at about 5:30 am. More colorful flowers were pushing their way out of the soil; the spring … 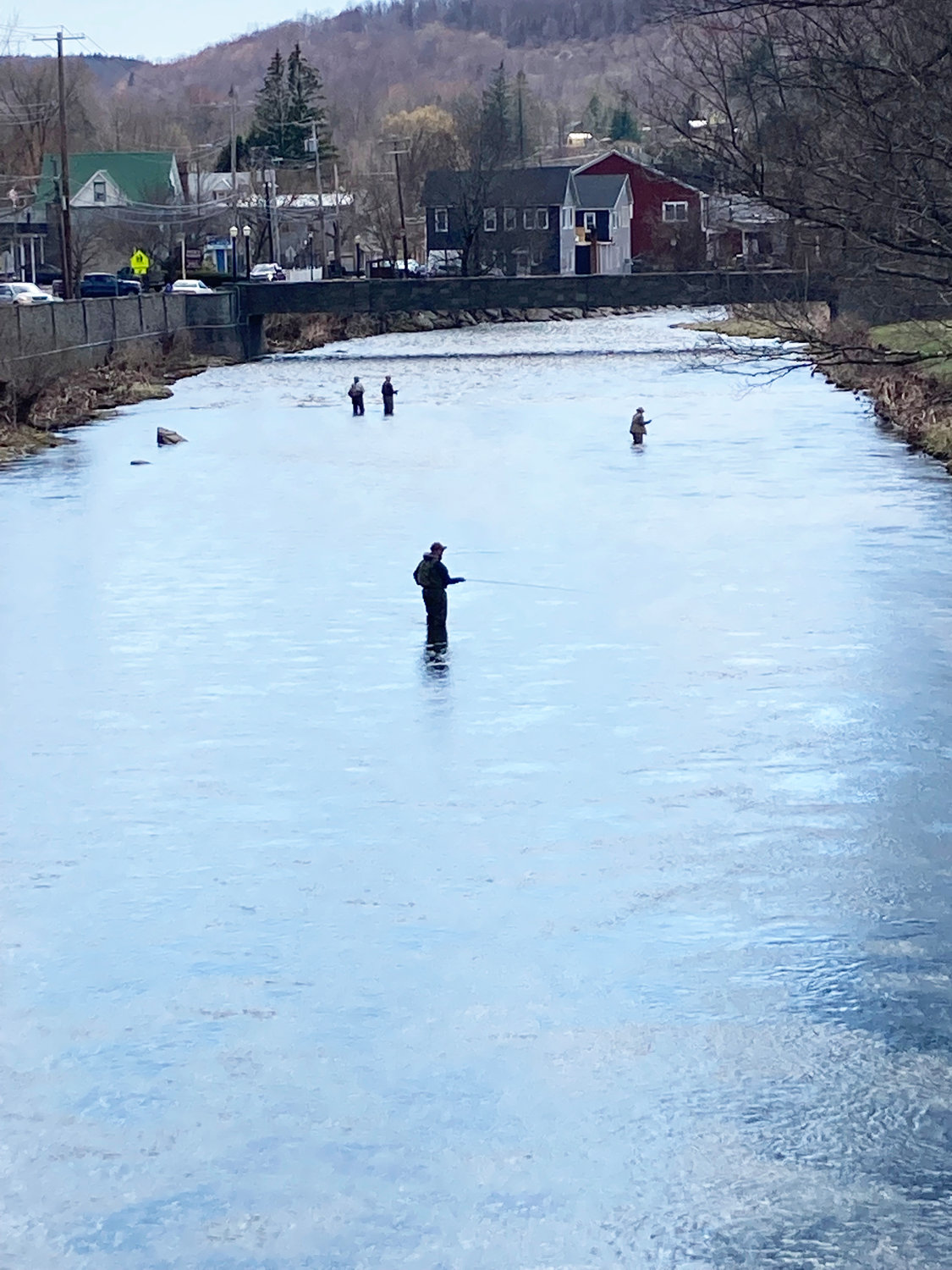 Easter weekend dawned to sunny skies on Friday morning; beginning with the cheerful sounds of the songbirds at about 5:30 am. More colorful flowers were pushing their way out of the soil; the spring peepers serenaded with a reverberating chorus that continued ringing through the evening hours. A trout was seen rising on an early morning walk along the river, and all was well. About an hour or so later after a trip into town passing by a number of anglers out on the Willowemoc, I suited up, eager to return to the river and catch that fish, only to find the wind had picked up significantly.

As I stepped out into the river it appeared as though there were some tiny brown and tan flies on the water – but a closer observation revealed that the objects were fuzzy seeds – and the wind was so strong as to discourage any rises. The air temperature was 54 degrees F and the water just 45 degrees; too cold for any hope of dry fly activity but I tried my luck anyway, fishing upstream for a while, then downstream with a large wet fly, then back upstream with a small Elk Hair Caddis that looked similar to the fuzzy seeds on the water.

After getting a chill from the winds I decided to call it a day but was happy for the chance to cast again and enjoy the time on the river - and was glad I did, as by Sunday one would think we switched from an April to a December holiday, due to the snow showers that were heavy at times.

For early-season fly-fishers, the best flies to try would be nymphs and wet flies – even some small streamers - but save the larger streamers for late-season/fall fishing, when minnows and young-of-the-year “fingerlings” are found in the stream. Dry flies won’t be very productive until the water temperature reaches that “magic” number of 50 degrees Fahrenheit, which triggers flies to hatch and trout to become more active and rise in pursuit.

One of the earliest flies to hatch during this time of year is the Black Caddis. Caddis flies are a favorite food of trout, and one of the major types of aquatic insects we use in fly-fishing, along with Stoneflies and the much-beloved Mayflies. Caddis fly larvae are very sensitive to water pollution; and as such their numbers can be indicative of good water quality in the streams and rivers they inhabit. Caddis belong to the scientific order Trichoptera and when riding on the water, have a puptent-like silhouette. Their bodies are segmented and tail-less, with antennae that give them the appearance of small moths.

The Larval stage of the Caddis fly are aquatic – they are slender and have a segmented abdomen that is covered with a portable protective case they make by holding available material together with a silk-like substance secreted from the glands close to their mouths. These cases can be made up of tiny gravel or sand (“stone caddis”) or tiny pieces of sticks, leaves or vegetation (“stick caddis”) available in the bed of the river or stream they inhabit. Caddis larvae have three pairs of legs at the front of the body, with small hook-like appendages near the tail used to anchor themselves inside the case, and a head with chewing mouthparts.

They spend this first and longest stage of their life cycle underwater, inhabiting most healthy rivers and streams, before hatching from their cases into the familiar moth-like adult stage. When they are ready to transform into the adult form (flying insect) they crawl out onto the rocks, leaving their cases stuck on the rocks as they emerge and fly away. As caddis fly hatches can be extremely prolific, non-fishers will be relieved to know that the adult form of these flies does not have mouth parts and as such, they cannot “bite” or feed and are quite harmless!

During this early season, a weighted dark nymph may be effective; one of our favorites has the colorful name of “Zug Bug” which we use with split shot and fish along the bottom of the stream. The fly is tied as follows: