Blossom Rozman of Ellenville, NY, passed away peacefully on Friday, January 21, 2022. She was 100 years old.Blossom was born in New York City to Saul and Ida Abramson, who were instrumental in … 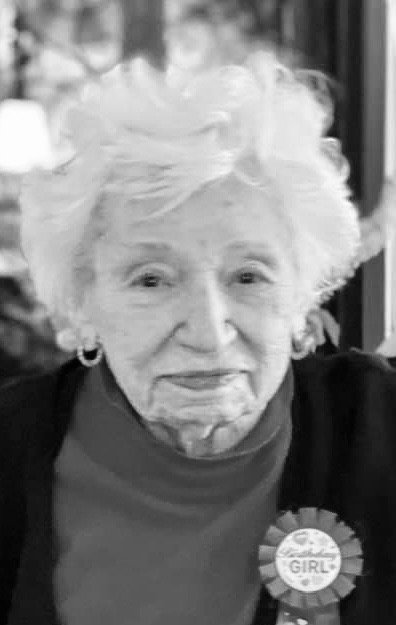 Blossom Rozman of Ellenville, NY, passed away peacefully on Friday, January 21, 2022. She was 100 years old.
Blossom was born in New York City to Saul and Ida Abramson, who were instrumental in founding the Young Israel Movement. She graduated from New Utrecht High School and received degrees from Hunter College and Merchants and Bankers School of Business.
She married Joseph Rozman, US Army Signal Corps, at the beginning of World War II and resided in Fort Monmouth, NJ, until he was shipped overseas into the Pacific Theater of Operations. During the war she was employed by the US Army in Special Services. Upon Joseph’s honorable discharge, they moved to South Fallsburg with their two young children when his father purchased the Riverdale Hotel. Joseph, an electronics engineer, got a job with Channel Master Corporation which brought them to Walden, NY, and then to Ellenville, when the company moved there in 1956. They made their home there since.
For 39 years, Blossom worked for First Monticello Securities Corporation and Ellenville Travel Service. She served on the board of Ellenville Regional Hospital Auxiliary, was President of The Women’s Branch of the Orthodox Union for Ulster, Sullivan and Orange Counties, was President and member of the Executive Board of Sisterhood of Congregation Ezrath Israel, and was Executive Board Member of the Anti-Defamation League of B’nai Brith Northeast Region. She was Event Chair and a Lifetime Member of the Ellenville Hadassah, as well as Sisterhood Congregation Ezrath Israel. She was past President of Ellenville Men’s and Women’s Unit of the B’nai Brith, and a charter member of the Statue of Liberty-Ellis Island Foundation.
Blossom was Theater Party Chairperson of the Ellenville Regional Hospital Auxiliary. Beginning in the late 1950’s, Blossom organized theater trips to Broadway shows in New York City as fundraisers for many organizations, but mostly to benefit The Ellenville Regional Hospital Auxiliary. Oftentimes these groups consisted of more than 100 people per event, filling multiple buses from Ellenville and Kerhonkson to Broadway. She was co-chair of the Ellenville Regional Hospital Auxiliary’s annual luncheon at The Eagles’ Nest in Bloomingburg for many years. Blossom also was a board member of The Jewish Star newspaper. She was known and appreciated as “The Storyteller” at the Ellenville and Kerhonkson/Accord Jewish Seniors’ meetings.
Blossom was responsible for implementing the Holocaust Studies program at Ellenville Central Schools, which was the first full-year program in the United States and subsequently served as the model for curricula in other schools. Additionally, Blossom implemented the “World of Difference” program at Ellenville Schools, developed by the Anti-Defamation League, which provides training in anti-prejudice and diversity recognition. Her awards and honors include: Ulster County Senior of the Year 2008; The ADL Torch of Liberty; Ellenville Regional Hospital Auxiliary Member of the Year; United Jewish Appeal Federation Honor for her commitment to the State of Israel; Retired Senior Volunteers Giraffe Award from the Auxiliary of the Ellenville Regional Hospital at the Retired Senior Volunteers’ Program luncheon; B’nai Brith Citation for implementation of the Holocaust Studies Program, and The Woman of Valor Award from Congregation Ezrath Israel. In 2012, Blossom was named Citizen of the Year by the Ellenville Noonday Club, and was feted at their dinner in 2013. In 2018, she was honored at the Ellenville Regional Hospital Annual Gala Banquet.
She was predeceased by her husband of 72 years Joseph, brother Dr. David Abramson and his wife Ruth, sister Deborah Heller and her husband Miles, brother-in-law Leo Rozman and daughter-in-law Susan Rozman.
She is survived by her sister-in-law Marilyn Rozman, son Ronald Rozman and his partner Deborah; daughter Vicki Caston and her husband Albert; granddaughter Carla Rozman; grandson Michael Rozman and his wife Lindsay; grandson Scott Wasserman; grandson Bobby Wasserman and his wife Leah, and great-grandchildren Sammy, Ellie, Zachary, and Sophia, as well as nieces, nephews and other extended family members.
The family would like to thank the following for their care and concern: The nurses at MidHudson Regional Hospital, the staff at Wingate Ulster, the staff of Hudson Valley Hospice, Sister Maria Lopez, and Rabbi Yael Romer from Temple Emanuel, Kingston, NY.
Due to the pandemic, graveside and shiva services will be private.
Memorial contributions may be made to the Ellenville Regional Hospital, 10 Healthy Way, Ellenville, NY 12428.
Arrangements are honorably entrusted to the Joseph N. Garlick Funeral Home - (845) 794-7474 or www.josephngarlickfuneralhome.com.