ROSCOE – The 8-man football playoffs kicked off this weekend, with the 3-seed Blue Devils hosting the 6-seed Bombers from Pine Plains. After being down 14-0 early, Roscoe was able to muster up … 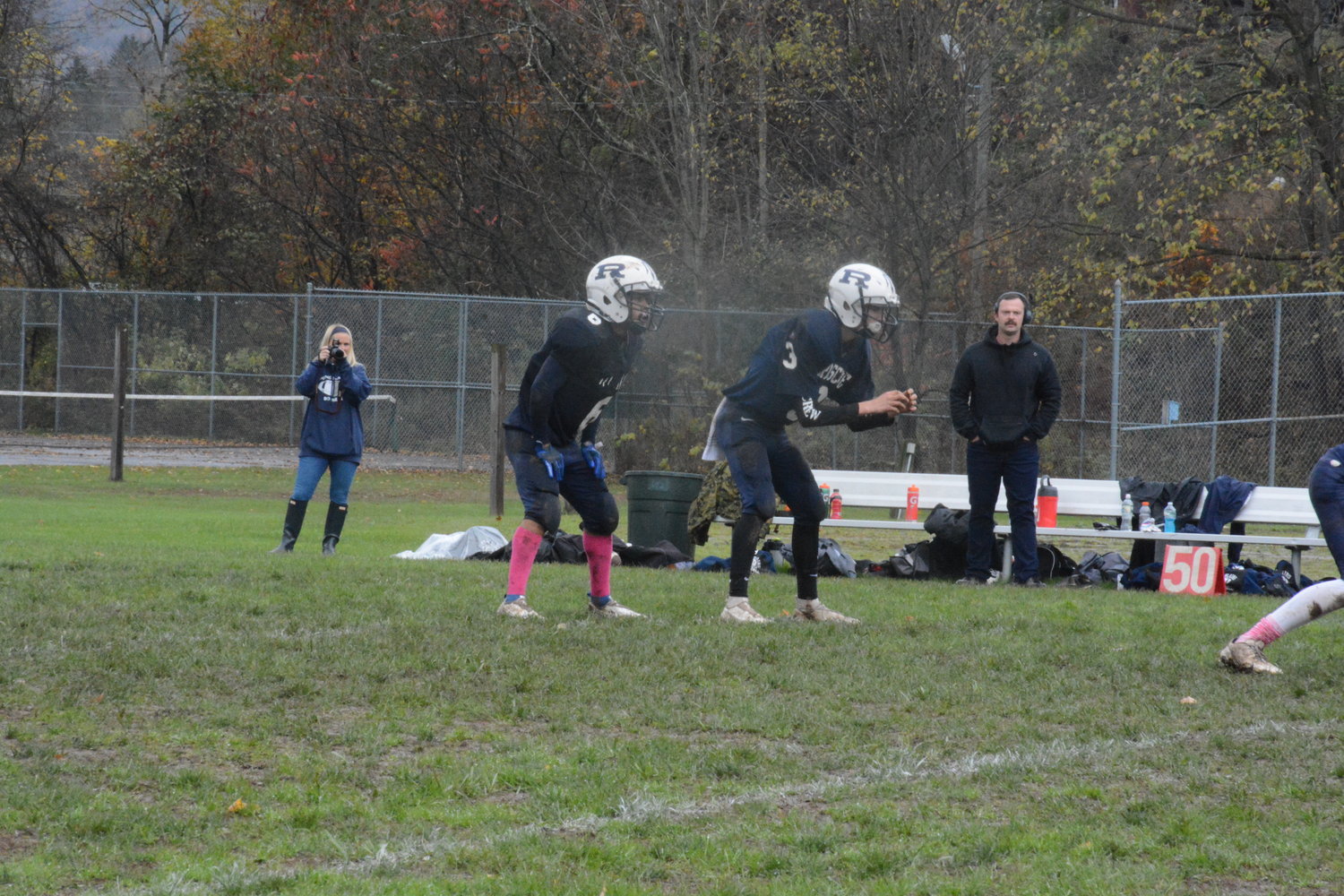 Anthony Zamenick and Alaniz Ruiz line up together in the backfield. They connected for a 54-yard touchdown strike in the second quarter en route to a comeback win over Pine Plains.
Joseph Abraham | Democrat 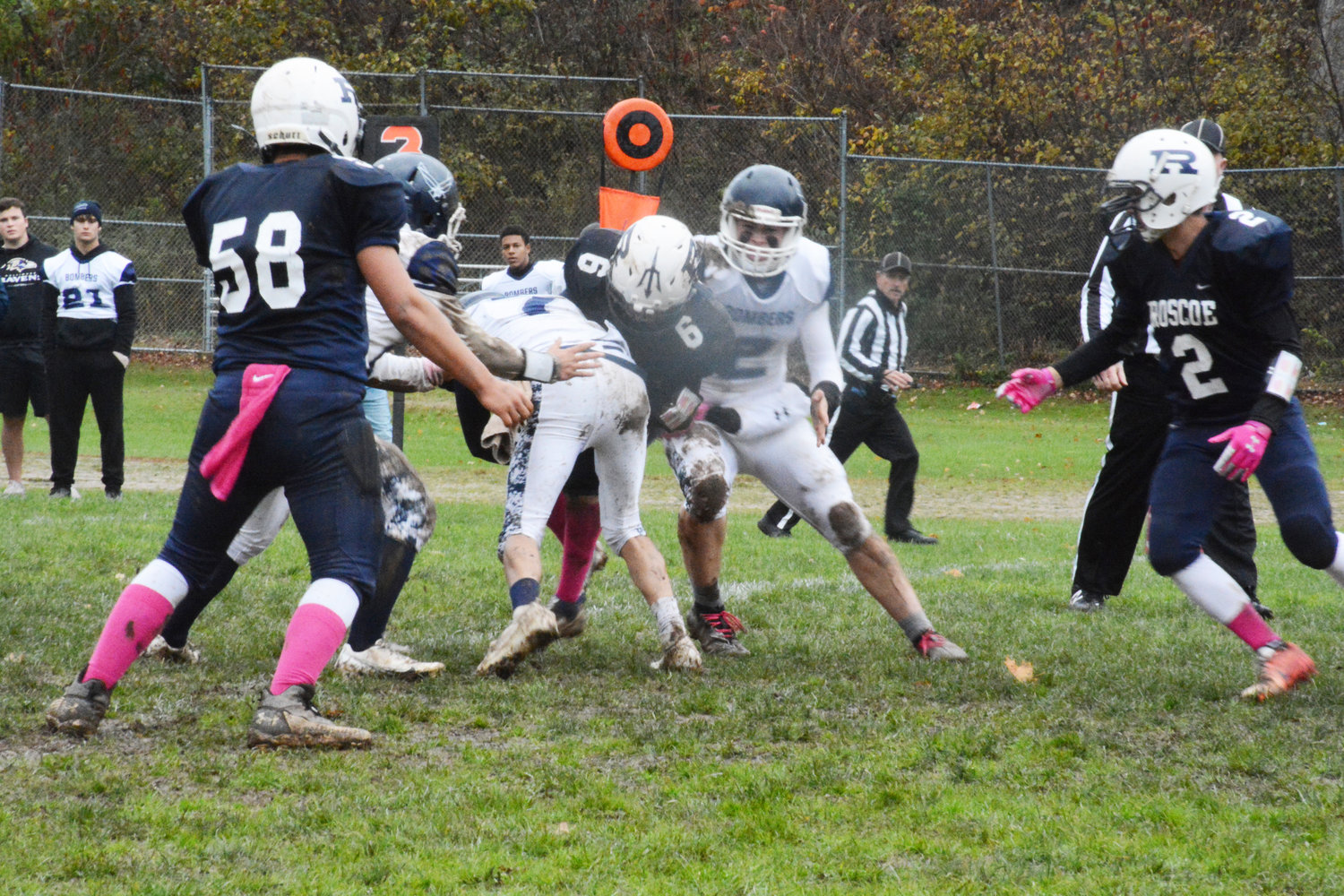 Alaniz Ruiz fights through contact as he pushes the line for a positive gain. Ruiz rushed and received a touchdown in Saturday’s playoff matchup against Pine Plains, earning 148 yards on offense as well as six tackles on defense.
Joseph Abraham | Democrat
Previous Next
Posted Tuesday, November 2, 2021 6:20 am
Anthony Morgano

ROSCOE – The 8-man football playoffs kicked off this weekend, with the 3-seed Blue Devils hosting the 6-seed Bombers from Pine Plains. After being down 14-0 early, Roscoe was able to muster up 18 unanswered points to defeat Pine Plains 18-14 and advance to the semifinals.

In the beginning of the game, it seemed like Pine Plains was going to upset the higher seeded Roscoe team after drawing first blood with a 5-yard touchdown strike early in the first quarter. With under five minutes gone in the contest, Pine Plains had already sped out to an 8-0 lead, and although Roscoe’s offense was able to move the ball forward, they were unable to find the endzone.

When the second quarter started, things seemed to pick up where they left off, as Pine Plains scored their second touchdown of the half with a 35-yard rushing touchdown. The 2-point conversion was stopped and the Bombers led by 14. Roscoe needed to turn the tide of the game or else it would end up being an early playoff exit for last season’s Section 9 Eight-Man football runner-up.

The call for a momentum change was answered in an unlikely way, as Roscoe had stalled a drive and punted the ball deep into Pine Plains territory. The Bombers were unable to get out from the shade of their goalposts, and were forced to punt inside the endzone. The punt was blocked and recovered for a touchdown. Lakota DeWitt stormed across the line of scrimmage, throwing his body in the way of the ball and Daniel Irwin opportunistically fell on the ball for the score. The 2-point conversion failed, but putting a score on the board gave life to the Blue Devils.

Later in the second quarter, Anthony Zamenick was at quarterback and Roscoe was ready to get their offense going down the field. A mishandled snap caused a fumble and the Bombers’ defense swooped in to try to recover, but Zamenick had quickly scooped it up, turned down-field and launched a pass to Alaniz Ruiz for a 54-yard touchdown. Again, the conversion failed for Roscoe, but the score was now 14-12 at the half.

Neither team could get their offenses restarted in the third quarter.

But finally, in the fourth quarter, Ruiz broke loose for his second score of the day, a 12-yard rushing touchdown that would give the Blue Devils a lead that they would not relinquish.

The Blue Devils totaled 224 yards of offense against the Bombers, which combined with their stellar defensive and special teams performance, was enough for the win. Roscoe also played disciplined football, not recording any penalties on the day.

The Blue Devils defense staved off the visitors until the final whistle, and Roscoe’s victory earned them a rematch with Spackenkill, who had defeated them earlier in the season 22-6.

Coach Mike Hill said, “We made a few mistakes, but we played a good, disciplined football game. We’re going to have to minimize our mistakes and establish our game early when we get to Spackenkill on Friday.”

The Blue Devils will travel to Poughkeepsie, the home of the No. 2 seeded Spartans, for a 5 p.m. semifinal matchup on Friday.