ROSCOE – The Blue Devils hosted Tri-Valley on Thursday night to wrap up their regular season campaign. Roscoe and Tri-Valley went back and forth all night, but a late free throw conversion for … 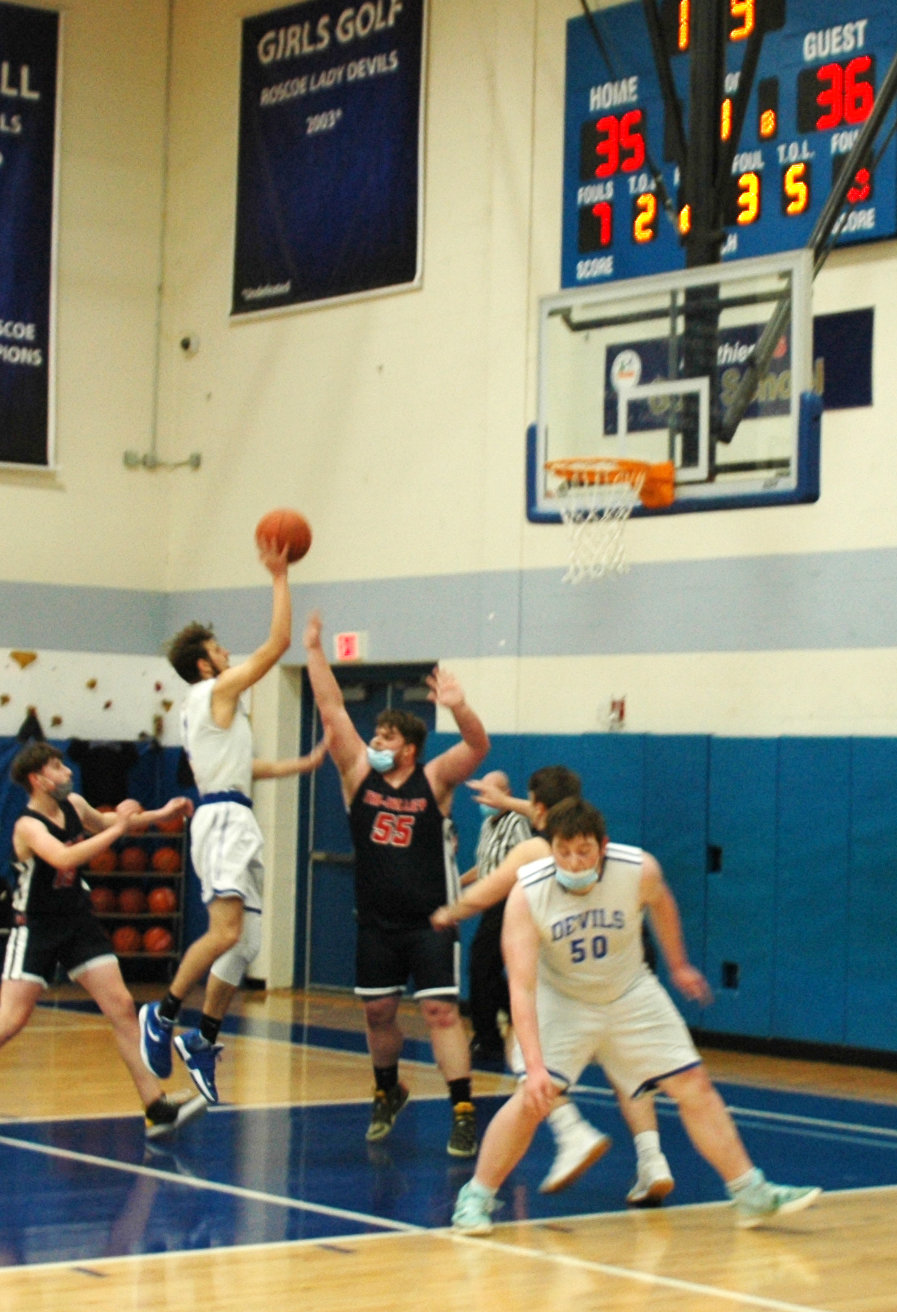 Anthony Teipelke rises up for a lay-up while trailing by one in the waning seconds of regulation against Tri-Valley. Although the shot did not fall, Teipelke was fouled on the play and scored the game-tying free throw with 2.2 seconds remaining.
Anthony Morgano | Democrat
Posted Tuesday, February 22, 2022 6:20 am
Anthony Morgano

ROSCOE – The Blue Devils hosted Tri-Valley on Thursday night to wrap up their regular season campaign. Roscoe and Tri-Valley went back and forth all night, but a late free throw conversion for the trailing Blue Devils forced the game into overtime, where Roscoe would win 46-40.

The low-scoring contest was due to a combination of trap defenses, forced turnovers and timely pressing. However, for as tough as the athletes were on the court, the sportsmanship on display between the two teams was the key takeaway.

Entering Thursday’s contest, Tri-Valley was on their third straight game, following a league loss to Sullivan West and an overtime contest with Liberty. Though they were in the midst of a back-to-back-to-back, the Bears’ defense continued to play with the same energy as they did after the holiday break in January. That is to say, their effort was not besmudgened by their full schedule.

“We played well on tired legs,” Tri-Valley coach Kevin Delaney said. “It was a great game and it gave our guys some valuable experience.”

The experience Delaney is referring to was the decision to give valuable minutes to the underclassmen that will be leading the team next year.

Scoring was spread out between both teams, as 15 different players netted points in the contest. Anthony Teipelke led all scorers with 17, including the free throw that tied the game with just 2.2 seconds to go. Alaniz Ruiz added 11 for Roscoe, five of which were netted in overtime to help secure the win.

Tri-Valley held Roscoe to just one point in the second quarter, but coming out of halftime, the Blue Devils sparked their offense, outscoring the Bears 17-11 to close the lead down to 2 at 27-25. After tying the game late in the fourth and forcing overtime, the Blue Devils outscored the Bears 10-4 in the extra period, ending on a 7-0 run.

The win marked Roscoe’s 10th of the season. Their 5-1 division record had already earned them a spot in sectionals, but the 10th win is a milestone nonetheless.