Blue Devils to spar with Spartans

ROSCOE – The No. 3 seeded Blue Devils are headed to Spackenkill this afternoon for a semi-final matchup against the 2nd-seeded Spartans. The boys in blue will have their work cut out for them …

Blue Devils to spar with Spartans 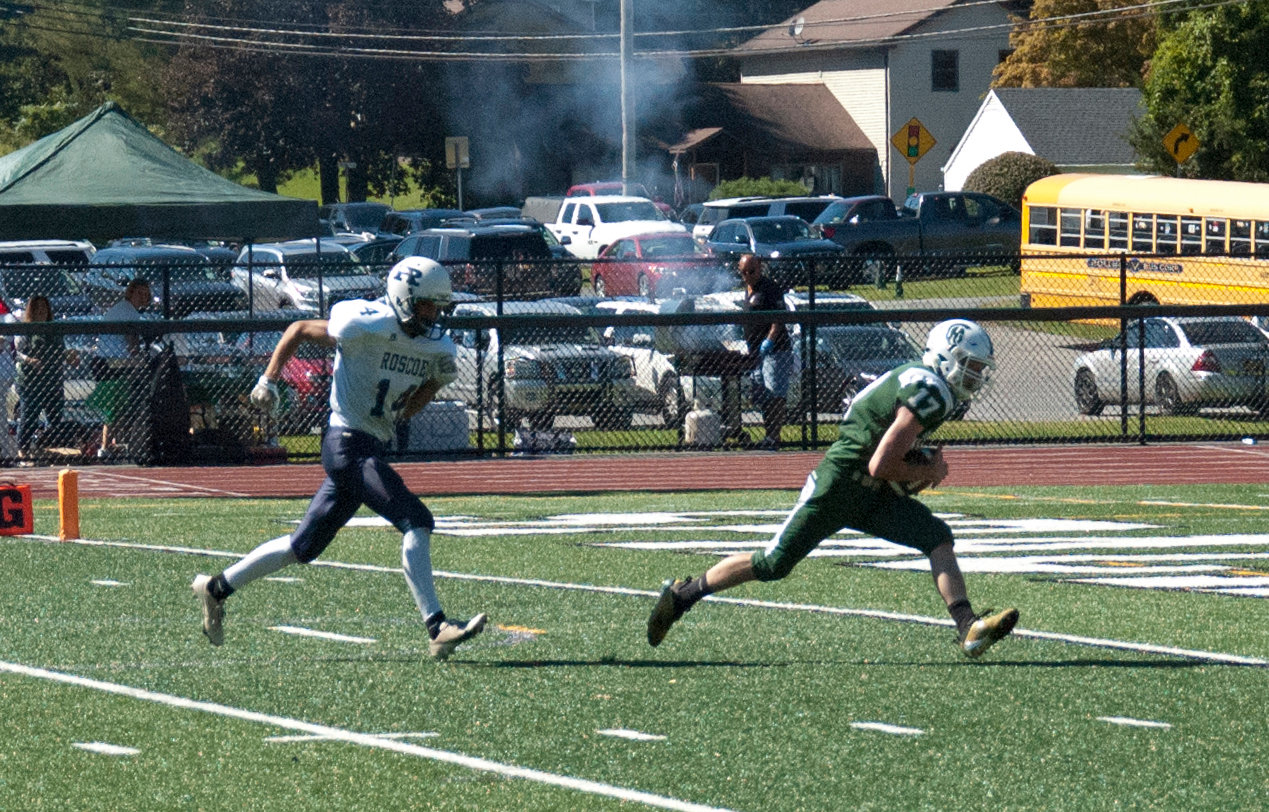 The Spartans have a mixed offense and are capable of scoring in multiple ways. As they host the Blue Devils, and their stringent defense, it will be a battle of one of the best offenses and one of the best defenses for the chance to play in the championship game.
Anthony Morgano | Democrat 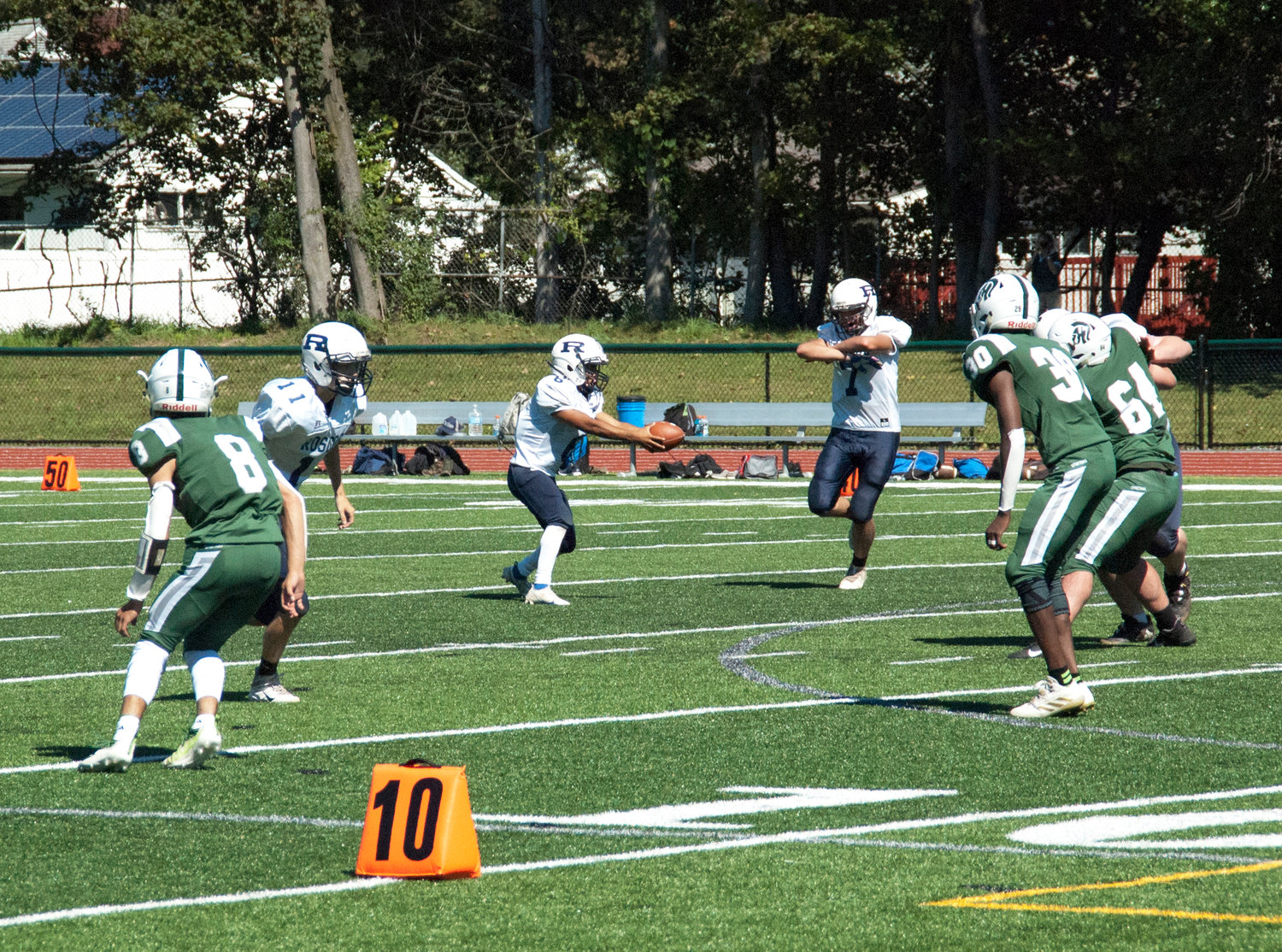 Under center! In the first meeting between Spackenkill and Roscoe, Alaniz Ruiz was at the quarterback position. As the season has progressed, the Blue Devils’ offense has previewed many different looks. What new looks will the Blue Devils bring out tonight as they face the Spartans?
Anthony Morgano | Democrat
Previous Next
Posted Friday, November 5, 2021 6:40 am
Anthony Morgano

ROSCOE – The No. 3 seeded Blue Devils are headed to Spackenkill this afternoon for a semi-final matchup against the 2nd-seeded Spartans. The boys in blue will have their work cut out for them as they face the other division’s top team.

The Blue Devils and Spartans met in Poughkeepsie in the second week of the season, as both schools entered that game with an 0-1 record. Roscoe had lost to Pawling in that first game, and Sullivan West defeated Spackenkill. The Blue Devils were defeated by the Spartans, who held Roscoe to one score and won 20-6.

After the Sunday showdown, the Blue Devils quickly raced to the top of the division, winning four straight games and improving their record to 4-2 (4-0) before losing to Sullivan West in the final week of the regular season. They finished high enough in the standings to host a first round playoff game, a come-from-behind victory over Pine Plains 18-14, that set the Blue Devils up for a second chance against the Spartans.

The Roscoe defense has been mostly solid all season. After giving up 38 points to defending champion Pawling in their season opener, the Blue Devils settled in defensively, holding Spackenkill to 20 points. In their first four league games, they outscored Ellenville, Fallsburg, Tri-Valley and Eldred 104-9 before losing to Sullivan West 28-6. The defense found itself again during the quarterfinal playoff match against Pine Plains, allowing only 14 points to the visitors, before shutting them out the entire second half, as well as blocking a punt that resulted in a defensive score.

The Blue Devils’ offense has varied all season long, with each week bringing different offensive looks to keep opponents on their toes. However, at the core of their offense has been running back Alaniz Ruiz.

One of the keys for the Blue Devils tonight is to get the ground game going and burn the clock against a team that regularly puts up 40 points a game. The last time the two teams faced off, Roscoe held Spackenkill to 20 points, their lowest total of the season. On the other side of Section IX 8-man football standings, Spackenkill finished 5-1 (4-0), winning five straight games to end the regular season. After losing 26-22 in their season opener against Sullivan West, Spackenkill defeated Roscoe by 14, Onteora by 36, Dover by 22, Pawling by 6, and Pine Plains by 20 to earn the top seed and a bye week.

After a slow start to their season, their offense started firing on all cylinders, scoring more than 40 points in each of their last four games, including hitting the half-century mark in a 50-44 shootout against the reigning 8-Man Champions, Pawling.

The Blue Devils struggled to get their offense going against Sullivan West and Pine Plains, but they will need to be able to put points on the board if they want to get past the Spartans.

Blue Devils’ coach Mike Hill said, “Spackenkill has probably improved the most out of all the teams, so we’re going to have to get off the bus and be ready to play.”

Tonight’s game starts at 6 p.m. in Spackenkill, and the winner will move on to the Section IX 8-Man Championship game next weekend.