LAKE HUNTINGTON – Beaming with that inimitable smile, Sullivan West’s Gavin Hauschild found himself in the spotlight yet again, this time penning his signature to the Division III … 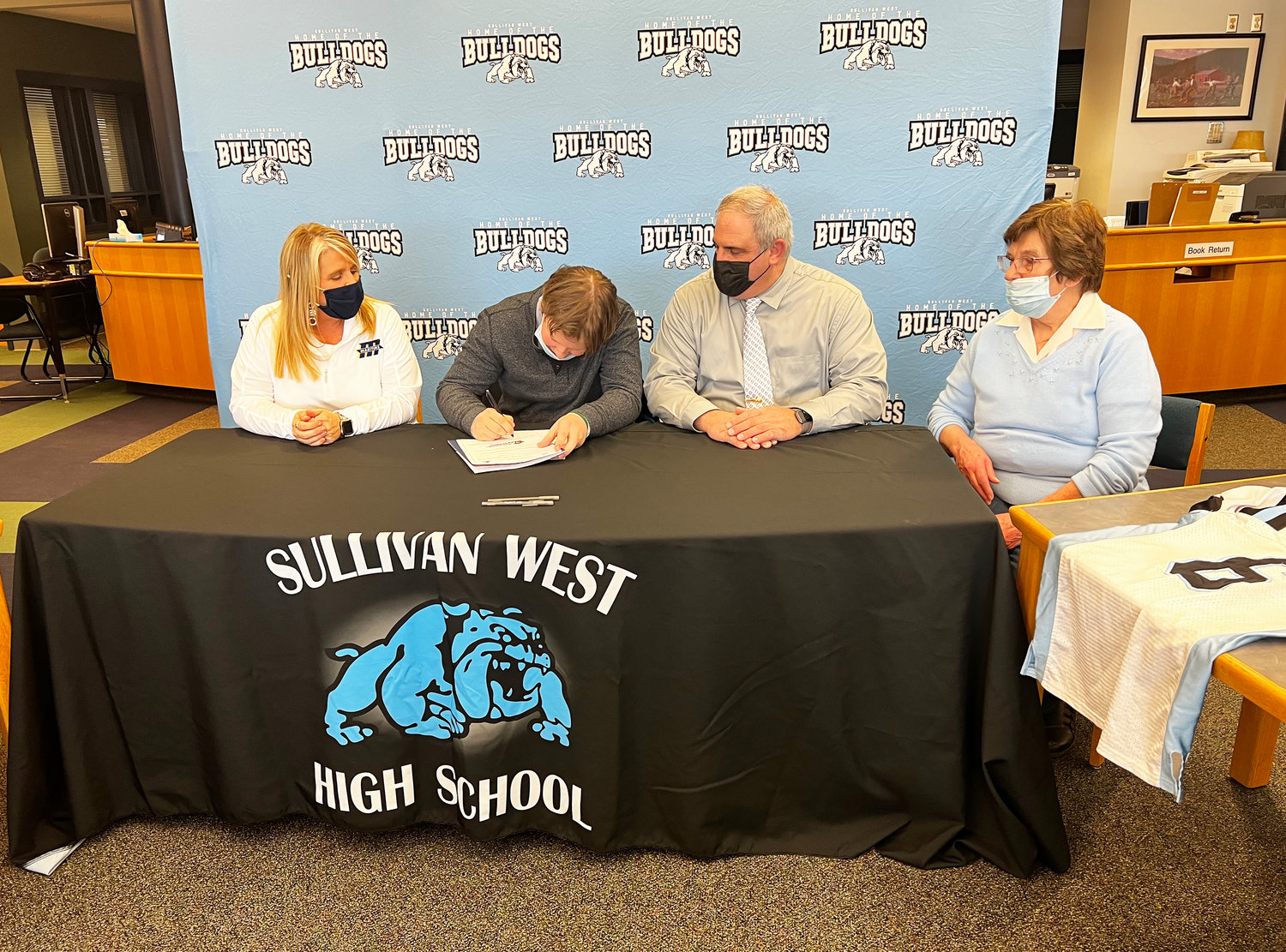 Sullivan West’s Gavin Hauschild pens the Division III Celebratory signing form making it official that he will be attending Massachusetts Maritime Academy to play football and pursue his intended path towards a career in Emergency Management. He is flanked by his mother Dawn, his father John and grandmother Barbara.
Richard A. Ross | Democrat
Posted Tuesday, February 15, 2022 6:20 am
Richard A. Ross

LAKE HUNTINGTON – Beaming with that inimitable smile, Sullivan West’s Gavin Hauschild found himself in the spotlight yet again, this time penning his signature to the Division III Celebratory Signing Form making it official that he will be attending Massachusetts Maritime Academy in the fall to play football for the Buccaneers. Thus, he embarks on a journey towards a career in emergency management, following in the footsteps of his estimable father John who serves as the Sullivan County Fire Commissioner and has devoted so much time to coaching football and basketball at Sullivan West.

Gavin was forthcoming about his choice. “I like the difference of this school. It’s military and regimented and they have a great football program. A commitment to the military after graduation is not obligatory. They like what I bring to the table and are looking for me to contribute on the offensive side of the ball as quarterback or running back. Their program is perfect for my interest in emergency management.”

Though he doesn’t know others that are attending, SW former standout football player Jimmy Erlwein is a graduate. Sitting beside his dad along with his ever-videotaping, ever-present, ever-loving mom Dawn and grandma Barbara Hauschild, Gavin put the pen to the paper and closed the deal.

Athletic Director David Eggleton opened the ceremony with a summary of Gavin’s glories as it were. They include six years of varsity football culminating in his role as Captain. The QB earned the honors of guiding his team to an Eight-Man Football Division title and a berth in the championship game. A Times-Herald Record Player of the Week, A Sullivan County Democrat Co-Player of the Year and an honorary invitee to the Section IX Exceptional Senior Bowl. He was an individual Scholar Athlete for the fall 2021 season. He also volunteered in the Red Dog football program spending his time and valuable experience helping younger players.

He played basketball for six years and been on varsity for the past two. He plays a variety of positions and has been a supporting contributor to the Town of Callicoon Youth Program. Rounding out his years at Sullivan West, Gavin has also played baseball, being a part of the program for six years and a starter on varsity for two. As such, he has been cited as an exceptional three-sport athlete. Football Coach Ron Bauer added his praises.

“Gavin showed great improvement and a great job as the team leader who earned the respect of his teammates and helped us to achieving all those wins. I’m sure that what he has shown will help him greatly at the next level.”

Assistant football coach/ offensive coordinator Justin Diehl went even further. He talked about Gavin’s commitment to the offseason training and dedication to the program. Diehl coached Gavin for three years and saw a massive improvement in skills and confidence. They marveled at how they thought of the same upcoming play showing their great relationship and ability to work together. “We had a great connection,” added Diehl.