Bring on the Broncos!

LAKE HUNTINGTON - Considering the large number of high school students who participate in athletics, the percentage of those moving on to play at the next level is astonishingly low. The chances of …

Bring on the Broncos! 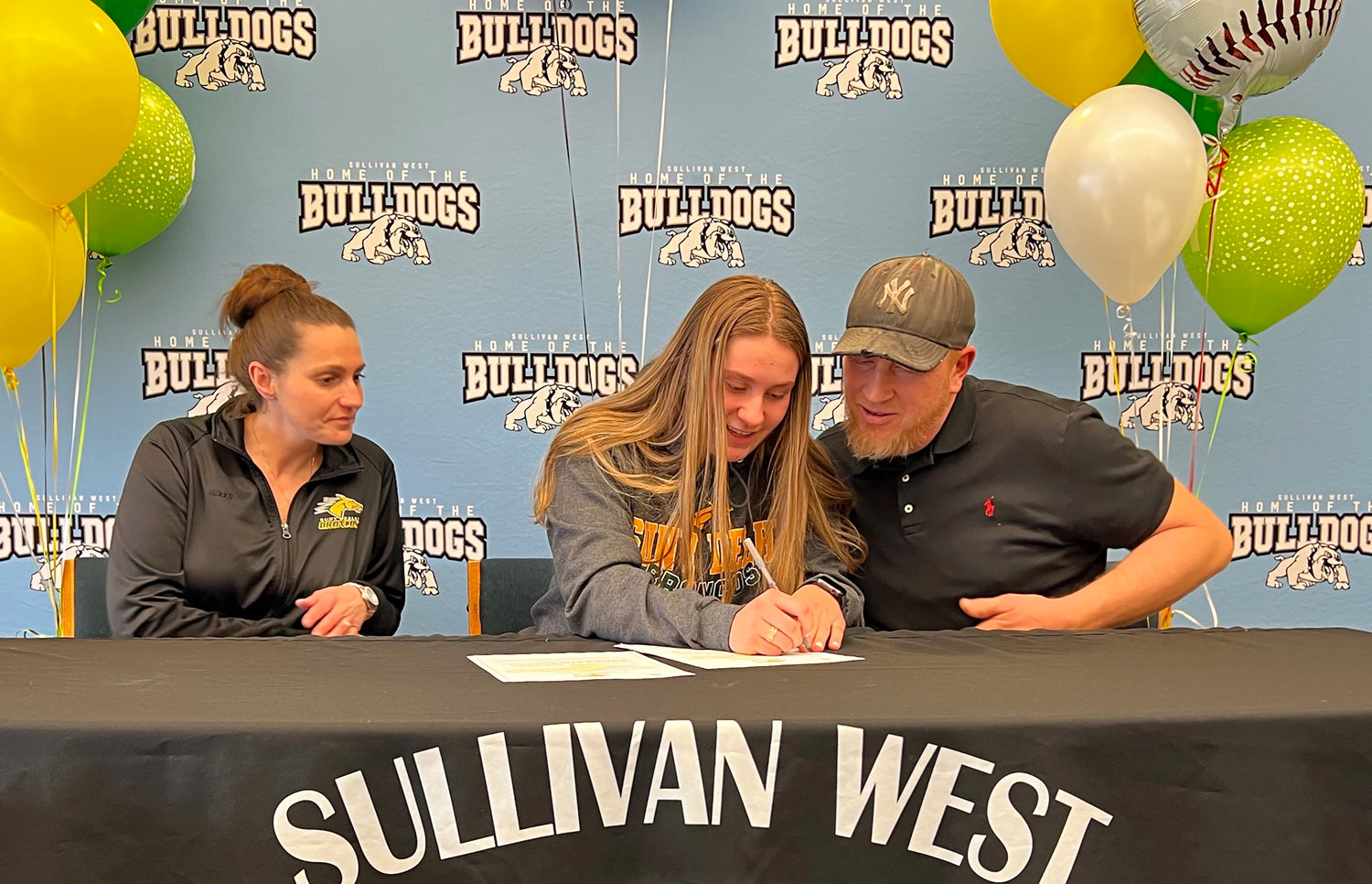 Riley Ernst signs her Celebratory Letter agreeing to attend SUNY Delhi and participate in women’s basketball and softball. She is flanked by her mom Crystal and her dad Jeremy.
Richard A. Ross | Democrat 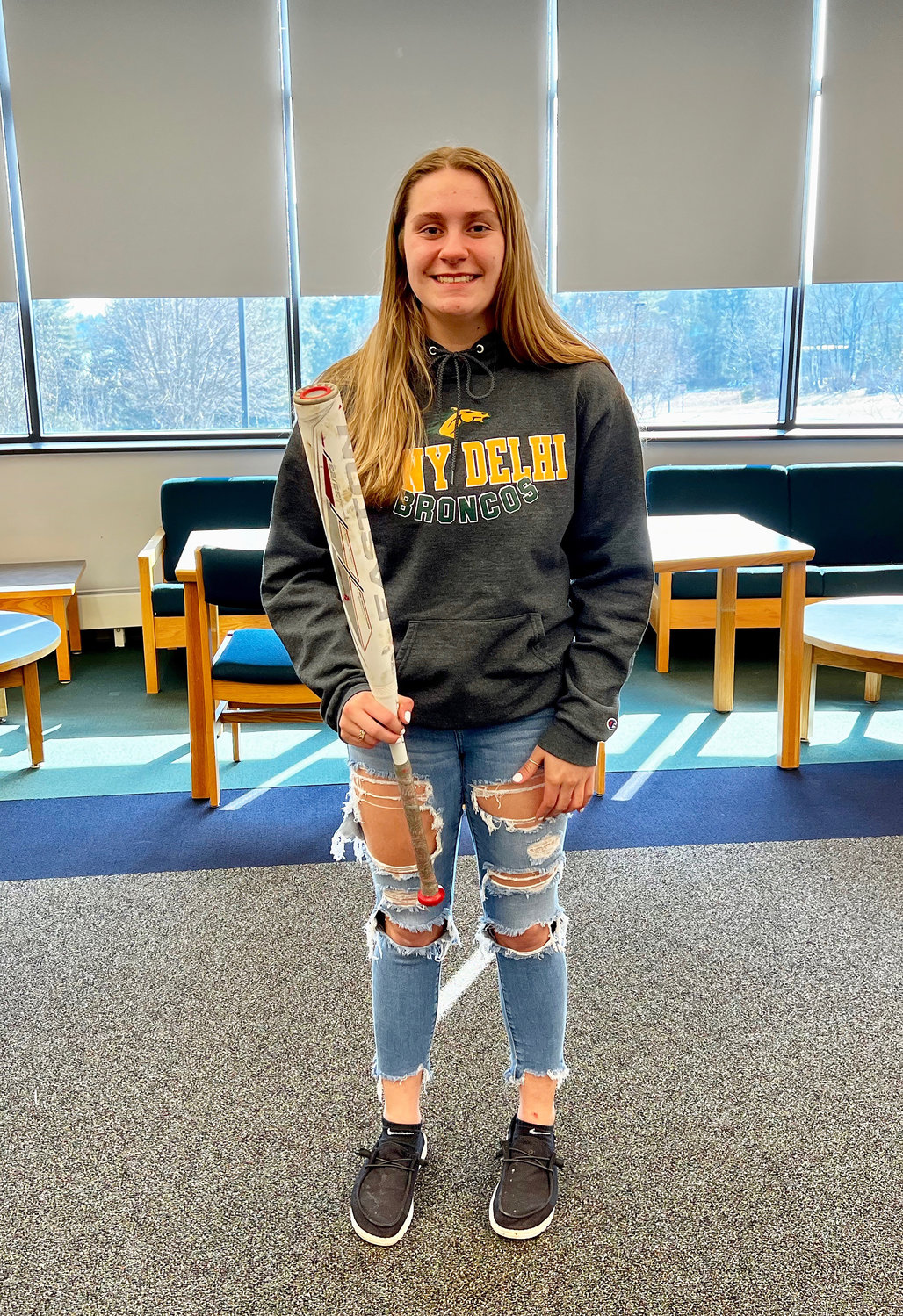 Riley Ernst poses with a smile and bat in hand prior to her signing. This time next year, she plans to be in Spring Training with the Broncos down in Florida.
Richard A. Ross | Democrat 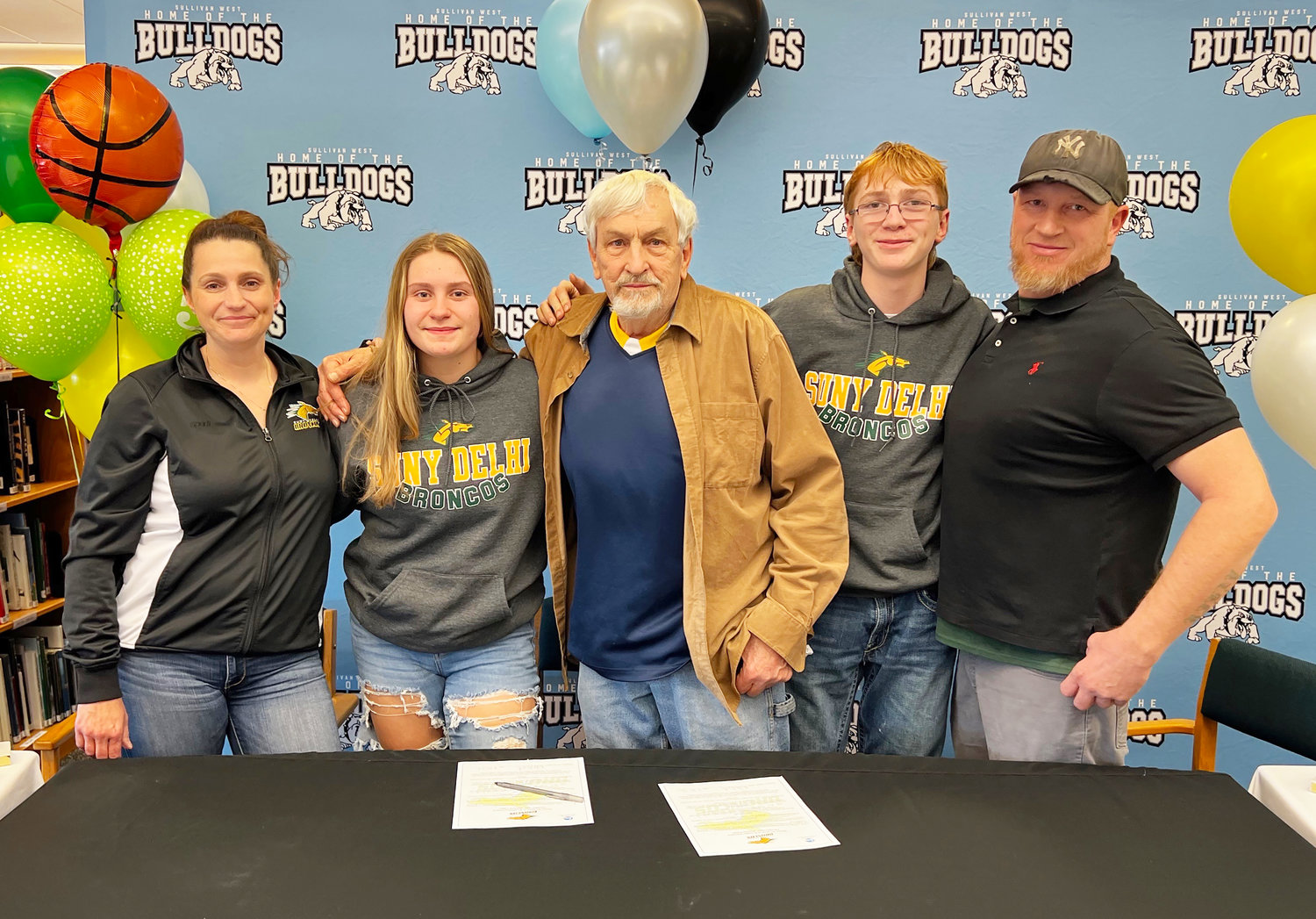 LAKE HUNTINGTON - Considering the large number of high school students who participate in athletics, the percentage of those moving on to play at the next level is astonishingly low. The chances of making it on to a college roster varies of course depending on the sport, and the figures for men and women are different as well. For Sullivan West’s Riley Ernst, a stellar three-sport athlete in soccer, basketball and softball, her acceptance to attend Division III SUNY Delhi to participate in the latter two sports makes her part of that talented few.

According to recent research, of the 399,067 high school girls basketball players, only 16,509 became NCAA participants (4.1%) across Divisions I, II, and III. The figures for softball are equally daunting: 362,038 high school girls moved on to 28,310 on the college diamond (7.2%). For Ernst, bound for the Broncos, the D3 figures make her part of the 1.7% in basketball and the 2.2% in softball. For the signing of her Celebratory Signing Form, her parents Crystal and Jeremy, her grandfather Lenny and her brother Adam were overjoyed to pose with her after she had signed the agreement from Delhi.

Prior to that photo moment and the others that followed with family and friends, Sullivan West Athletic Director welcomed all and shared a recap of Ernst’s impressive sports career as a Bulldog.

She played soccer for six years, with the past three on varsity, and performed heroically as the goalkeeper. The team qualified for Sectionals and dueled against Millbrook this past fall. She was given the Defenders Award in 2021-22 by the SW girls soccer coaching staff. She has also volunteered with helping the AYSO soccer program.

Her basketball resume entailed a six-year tenure with three years on varsity, with the past two as a starter. She played guard and forward. She also volunteered her time to assist the youngsters in the Town of Callicoon Basketball program working with the fifth and sixth graders.

Softball was yet another six-year tour of duty, including four years on varsity. She has pitched and played both infield and outfield positions.

Riley is enrolled at the Sullivan County BOCES Career and Technical program for nursing, a course of study she will continue to pursue at Delhi.

Girls varsity basketball coach Pat Donovan spoke glowingly of Ernst. “Riley has been a vital member of the girls varsity team for the past three years. She has twice been selected by the Coaches of Section IX as one of the top 50 players in the Section. She was named a Sullivan County Democrat girls basketball All-Star for 2021-22 hoops season. She has been a leader both on and off the court and her sense of humor, personality and work ethic will be a great asset to SUNY Delhi.”

Varsity soccer and softball coach Anthony Durkin noted, “I’ve had the pleasure of coaching Riley in two sports over the last four years. For as long as I’ve known her, I’ve known her love is on the softball field. Coach Scheibe and I first observed her on modified and the next year as a freshman, she was playing on varsity. She’s always played softball outside of school on travel teams. She works very hard in pitching, fielding, throwing and batting to improve her skills. She should look forward to taking her skills to the next level.”

SUNY Delhi head women’s basketball coach Aidan McRoberts spoke on a zoom conference. “The first time Riley and I talked I knew we would get along instantly. We’ll get along famously. Our program has been completely reset and I’ve been looking for players to grind it out day in and day out regardless of what it takes. Riley is a blue-collar athlete, the kind we are looking for to help us rebuild our program.”

McRoberts continued, “On behalf of varsity Softball head coach Meaghan Stone, let me welcome you as well. She and the team are currently in Florida for spring training, so this time next year you won’t have to be looking at the snow.”

Riley then put her pen to the celebratory signing form with her parents by her side. A family photo followed suit as well as others. Around the library were mementos of Riley’s basketball and softball career at Sullivan West.

We here at the Sullivan County Democrat wish to extend our congratulations to Riley Ernst and wish her unbridled success as a SUNY Delhi Bronco in all of her pursuits.