There we were trying to enjoy the Yankees-Orioles game Monday night, August 1 and a pretty good healthy looking Kittie cat decided to make its way onto the field thus creating a delay which the fans … 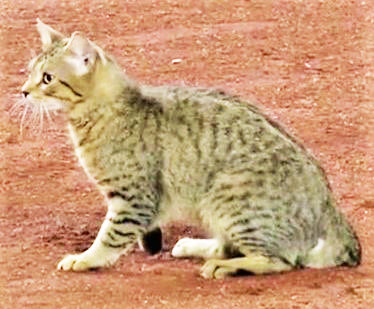 Never got his name but this Kittie put on some amazing moves as Yankee Stadium security and ground crew attempted to catch him, but couldn’t grab him August 1 during the Yankee-Baltimore game.
Contributed photo
Posted Tuesday, August 10, 2021 7:00 am
Ed Townsend

There we were trying to enjoy the Yankees-Orioles game Monday night, August 1 and a pretty good healthy looking Kittie cat decided to make its way onto the field thus creating a delay which the fans seemed to enjoy.

The cat soon became the fan favorite, as the Yankees were losing the game 7-1 in the eighth inning and fans were heard shouting “MVP” but the rampaging Kittie surely put on a show.

As soon as Kittie found his or her bearings the cat scampered between several players and the home plate umpire but decided the open outfield pastures looked a little more friendly.

The outfield warning track soon saw most of the action, but the Yankee Stadium grounds crew and staffers just were no match for the cat who displayed some pretty fancy moves that any football halfback would like to possess.

It was a side-show the baseball fans had not paid for as Yankee staffers circled the cat several times but couldn’t match the moves this Kittie displayed.

Now what in the world was going through this cat’s mind as he definitely was in the wrong place at the wrong time and most probably was scared out of his mind in the very loud and well-lit stadium built for baseball games not cat chasing by security who didn’t have a clue.

The cat made several attempts to jump into the bullpen with little success. Finally a security guard opened up a gate which we are sure Kittie said, “Thank You”, as he scampered his way through the Yankee Stadium stands.

It’s amazing what type of entertainment baseball fans get to enjoy.