The powerful quartet known as Celtic Woman is now bringing their voices to the Bethel Woods Center for the Arts on the Pavilion Stage this Sunday. 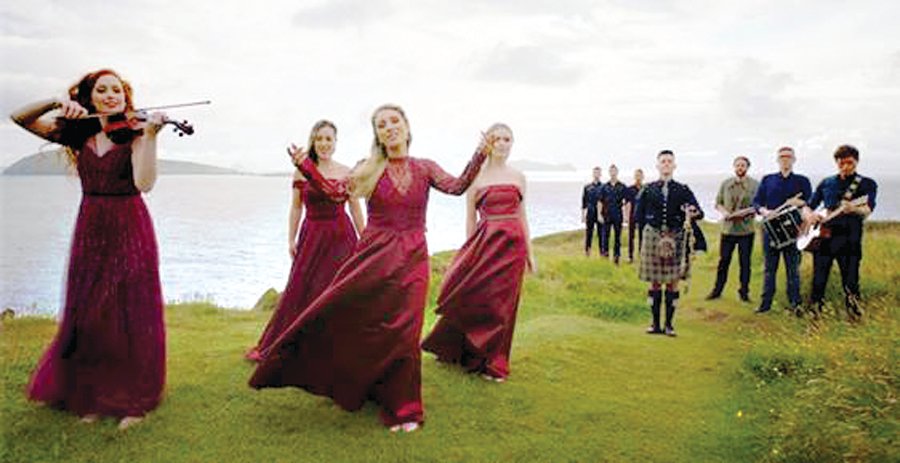 Celtic Woman will perform at Bethel Woods Center for the Arts this Sunday.
Contributed Photo
Posted Friday, June 3, 2022 6:10 am
By Barry Lewis

The powerful quartet known as Celtic Woman is now bringing their voices to the Bethel Woods Center for the Arts on the Pavilion Stage this Sunday.

Their Postcards from Ireland tour and latest album celebrate the rich musical and cultural heritage of Ireland; taking audiences on a journey of story and song from across the Emerald Isle with angelic voices, breath-taking harmonies, and instrumental virtuosity.

Tara McNeill, who joined the group in 2016, is a violinist, singer and harpist from Antrim, Ireland talks about how she would describe the music the group is bringing to Bethel Woods and what it's like to be part of Celtic Woman.

Barry Lewis: Was there ever a feeling these last two years that you may not ever get back on the road?

Tara McNeill: Yes, I think everyone in the music world was very scared of what the future held for the entertainment industry. For a long time we didn’t know when we would get back. I know dates were rescheduled and rescheduled again. Like everyone in the world we didn’t know what was going to happen next so we just had to stay put and stay positive and hope the world would come back and our industry is back. We’re almost at the end of our tour across the U.S. and we’ve been very lucky and we’re looking forward to Bethel Woods.

You know that you’re playing at the site of the original Woodstock Festival.

Yes, I’m very excited. I’ve never played there before. I know there’s a museum there, and I want to make the most of that. To perform somewhere where these incredible artists did, at such an historic event, is very special.

Personally? Well I’ve played for Bono, which was before my time with Celtic Woman. I played in his string section. That was pretty awesome. I did get to talk with him as well, but I couldn’t hear him because of the music on stage. I cringe when I think about that interaction.

For those not familiar with Celtic Woman, what can people expect to hear?

Of course we have Irish songs that people love so much. There’s myself on violin and there’s lots of Irish melodies that people will know but we also have incredible dancers, we have bagpipes. It’s a very lively and exciting show. There’s something for everyone.

In some countries most of the audience doesn’t speak English but repeat lyrics back to you.

That really baffles us. Even songs that we do in the Irish language people sing it back to us. The beautiful melodies hold a special meaning. Our songs are about love, loss, travel, family and no matter where you are in the world people can connect to that. I feel so honored that Celtic Woman has traveled across the world and that our music resonates with people. I’m so grateful but I do think it’s because of the meaning of songs and the beautiful melodies that Irish music is known for.

Love, loss and family are pretty good themes coming out of a pandemic.

I think people have realized that’s all that matters in this world. It’s the people in your life.

You play the violin but you wanted to play the clarinet?

One of my friends played it, I thought it looked cool and I still adore the sounds of the clarinet in the orchestra (laughing) but I got into the strings section and I’m grateful for that. I adore the violin, I feel it’s like another limb to me, it’s my identity and it’s brought me a lot of places. I’m OK with that now and I can leave the clarinet in the past.

I did. I played for the filming of the Destiny TV special. They needed a harpist in the band and that was my first interaction with Celtic Woman. I had admired them for years and was just happy to be involved in any shape or form so I jumped at that and then a few months later the violin job became available. I auditioned for that and luckily I got the job.

Did playing with them help you get the job?

Well, it meant that I got the audition which was a lot. They don’t hold open auditions. They have to find you so it was certainly helpful in that regard. But it was funny because some of the bosses at the time didn’t even know that I played the violin.

The show is physically demanding, especially for the violinist. How do get ready?

We have sound checks every day and I always take a bit of time to warm up before the show. There’s a lot of preparation before the tour, learn the music, the choreography. The challenge is playing and always dancing at the same time. But I love it and thrive off the movement. I definitely have to look after my physical health to dance around but I think with the violin it’s years of practice that gets you to this point.

Are there breaks in your schedule that allows you to perform solo?

I would play some dates with my husband who is a pianist but honestly, there’s not too much time when you’re with Celtic Woman. Definitely in the future I will try to find more time for solo work. But I’m loving Celtic Woman. It was my dream job and my dream goal.

What songs do you think will really excite the crowd?

Of course we have the favorites. Danny Boy gets a great reaction every night, Amazing Grace we’ve had some wonderful moments where the audience sings along. I hope that happens at BW. We have some new fun numbers and I get to run around the stage.

What’s the secret to the group’s longevity?

I honestly think it’s what we talked about before, it’s the songs and the music, being about love, family and travel. I think it’s something everyone can really achieve. I do think Celtic Woman has a unique way of translating that music. Of course in the states there’s such a connection to Ireland and Irish heritage so I do think that’s made a difference with the American audience.