ROSCOE – Fallsburg and Livingston Manor/Roscoe squared off on Saturday night. The Blue Devils unveiled their new air attack, but it was the Comets who found the end zone for a third time and … 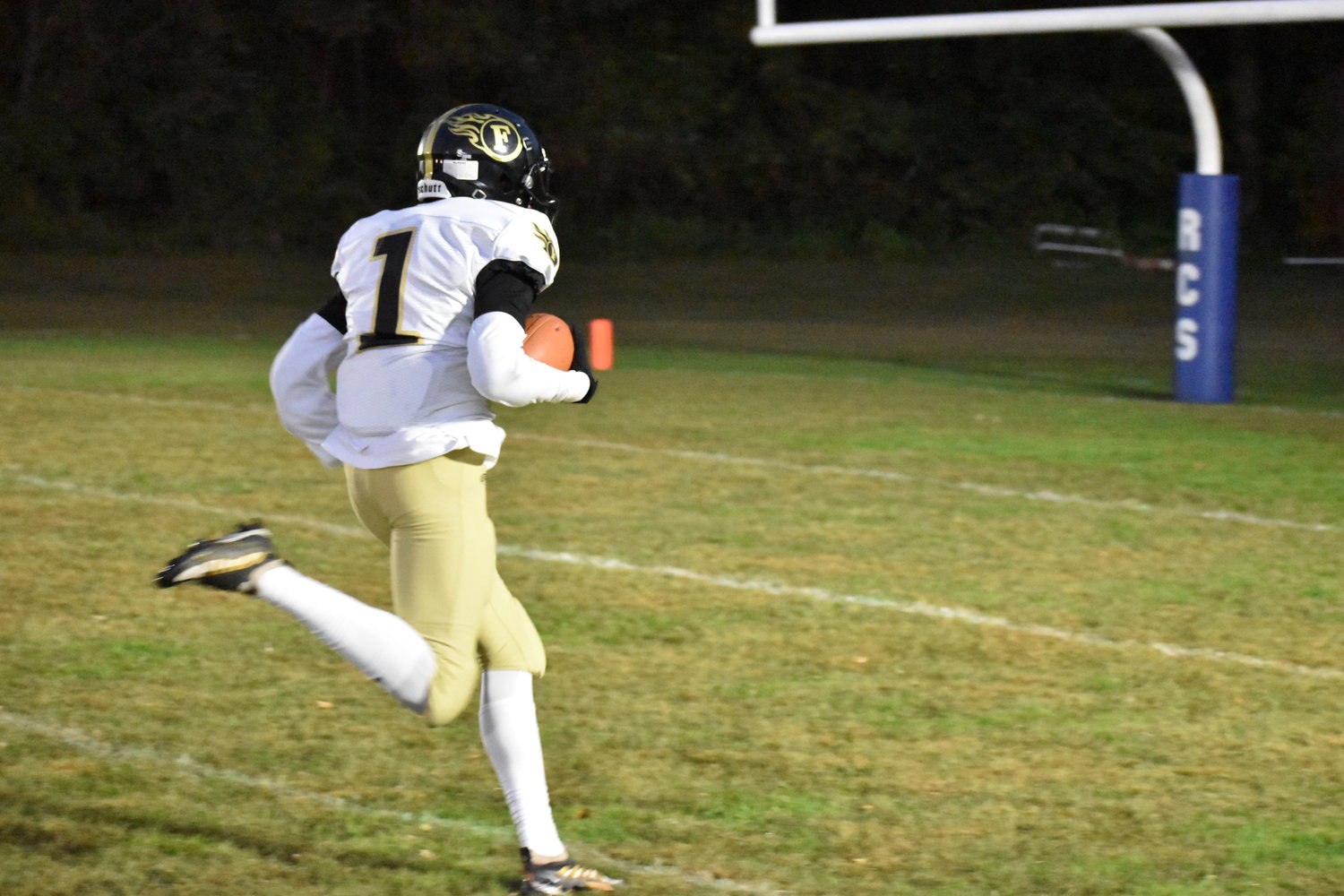 Isaiah Young trots into the end zone for a touchdown in the first quarter.
Anthony Morgano | Democrat 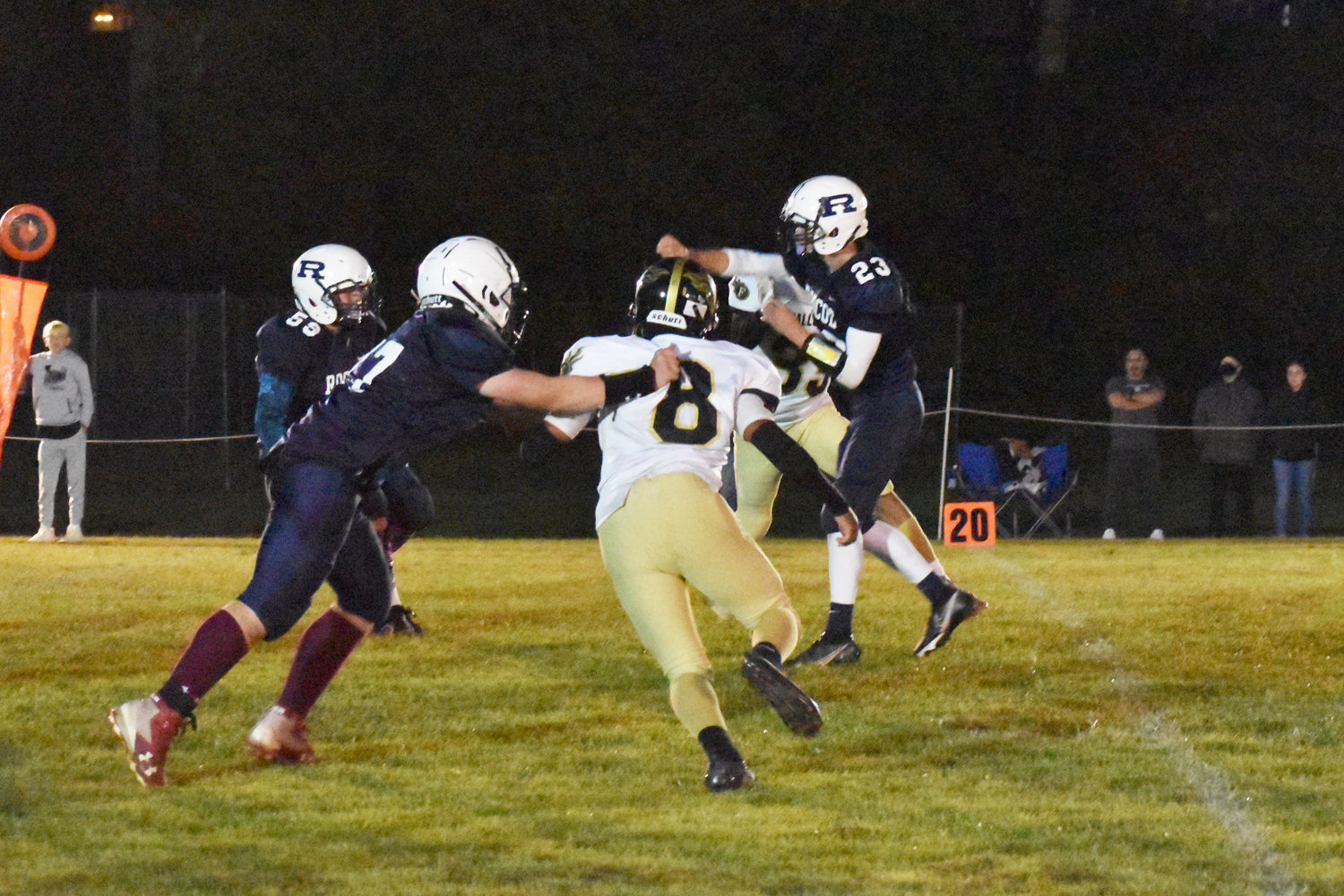 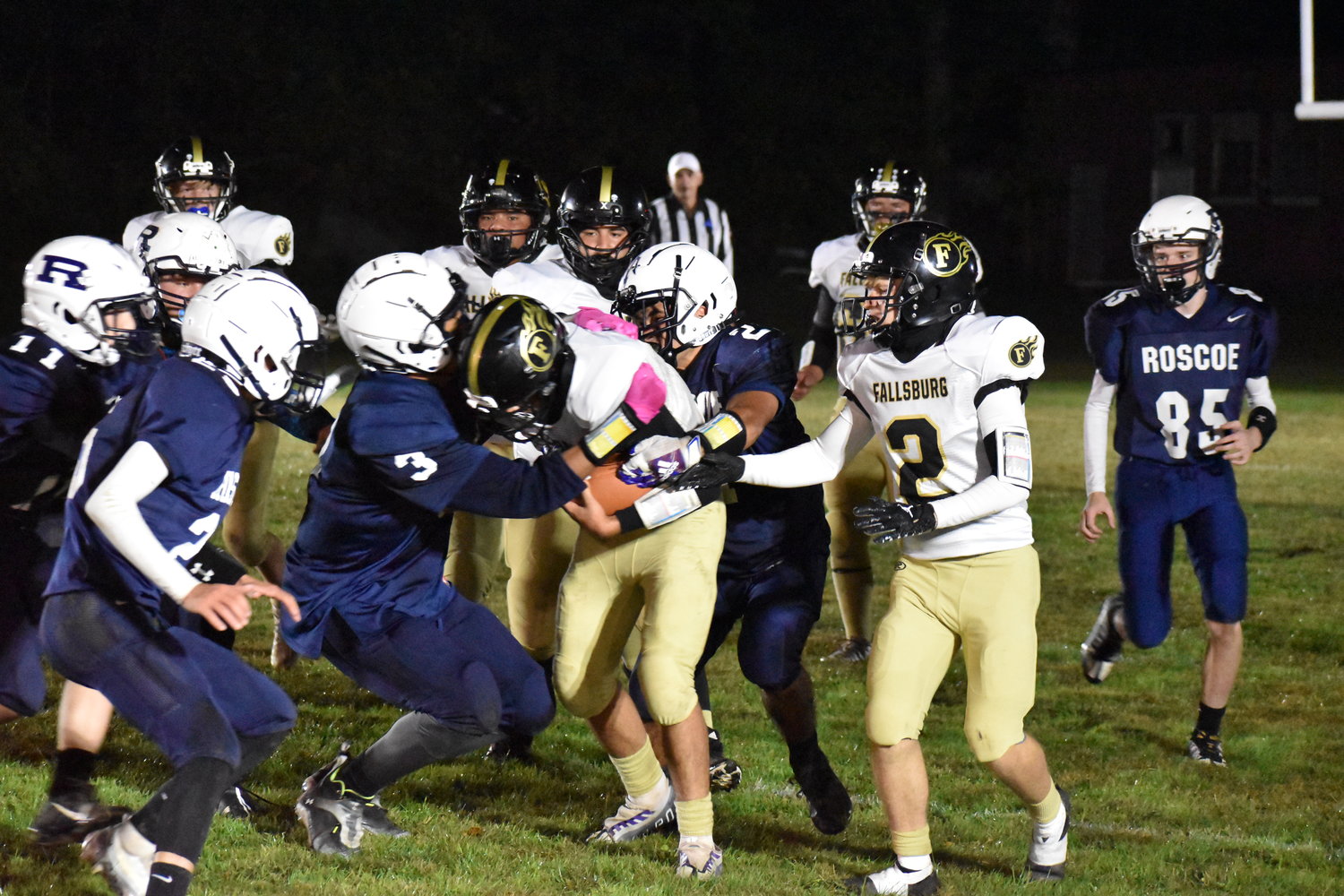 The game was a great defensive effort by both teams, but Andrew Rein and the Fallsburg Comets broke through just enough to secure the 20-14 league victory.
Anthony Morgano | Democrat
Previous Next
Posted Tuesday, September 27, 2022 6:30 am
Anthony Morgano

ROSCOE – Fallsburg and Livingston Manor/Roscoe squared off on Saturday night. The Blue Devils unveiled their new air attack, but it was the Comets who found the end zone for a third time and secured a 20-14 win.

Fallsburg’s defense started strong, and in their first offensive drive of the game, QB Andrew Rein found Isaiah Young for an early touchdown. Roscoe blocked the extra point attempt, but the 6-0 lead and strong defense seemed like a continuation of Fallsburg’s opening week win over Onteora.

Roscoe got the ball back after the score, and with 4:25 left in the first quarter, Aiden Johnston connected with Anthony Teipelke for a Blue Devils touchdown. Anthony Zamenick punched in the 2-point conversion and Roscoe took an 8-6 lead.

Fallsburg started with great field position after a long kick return and a facemask against Roscoe, but after winding 1:21 off the clock, turned the ball over on downs. Roscoe, and their new pass heavy offense, quickly had a 3-and-out, punting the ball back to Fallsburg after taking just 22 seconds off the clock.

After another defensive stand, Roscoe received a punt to end the first quarter with the ball and the lead. Penalties mounted against the Comets, with a facemask and an unsportsmanlike conduct penalty keeping Roscoe’s offense moving up the field. Eventually, the drive stalled, and after a few more stalled drives, it was Roscoe with the ball backed up against their end zone. A fumble forced by Mateo Scanna was recovered by Andrew Rein, and the Comets set up with a first and goal. They were able to punch it in easily, and convert the 2-point attempt to take a 14-8 lead at halftime.

The second half continued the defense-heavy trend of the game, and Roscoe started by forcing a fumble and recovering it, before the teams exchanged punts. Roscoe set up with 4:52 left in the third, driving into Fallsburg territory when Johnston connected with Anthony Teipelke for a second touchdown reception to even the score at 14. Roscoe attempted the extra point but it was no good.

There were clock issues in the fourth quarter, so the referees kept the time on the field instead. When the clock went down, there were seven minutes remaining, and Fallsburg’s offense came up big in the final minutes. Rein crossed the goal line for the go-ahead touchdown to put Fallsburg up 20-14 with 58 seconds remaining.

Roscoe had a chance, but after converting a first down, Johnston threw an unfortunate interception that effectively ended the game.

“Credit to Coach Scanna and his staff, they are doing such a great job with the program,” Roscoe Coach Mike Hill said after the loss. “Little by little we are getting better. We had a couple mistakes, and their punter kept us pinned deep in our territory. It was a great crowd and a good, tough close game.”

“It wasn’t pretty but we gutted it out,” Fallsburg Coach Dom Scanna said. “Credit to Roscoe and their coaches, that team doesn’t quit.”

“Two weeks off is tough, but Rein and our offensive line played great tonight, and although we hurt ourselves a few times, we never quit.”