Comets and Indians tip off 2022

LIBERTY – Two teams looking to kick the year off right, the Comets were on the road to face the Indians in a division matchup. The rivalry did not disappoint, and when the final buzzer sounded …

Comets and Indians tip off 2022 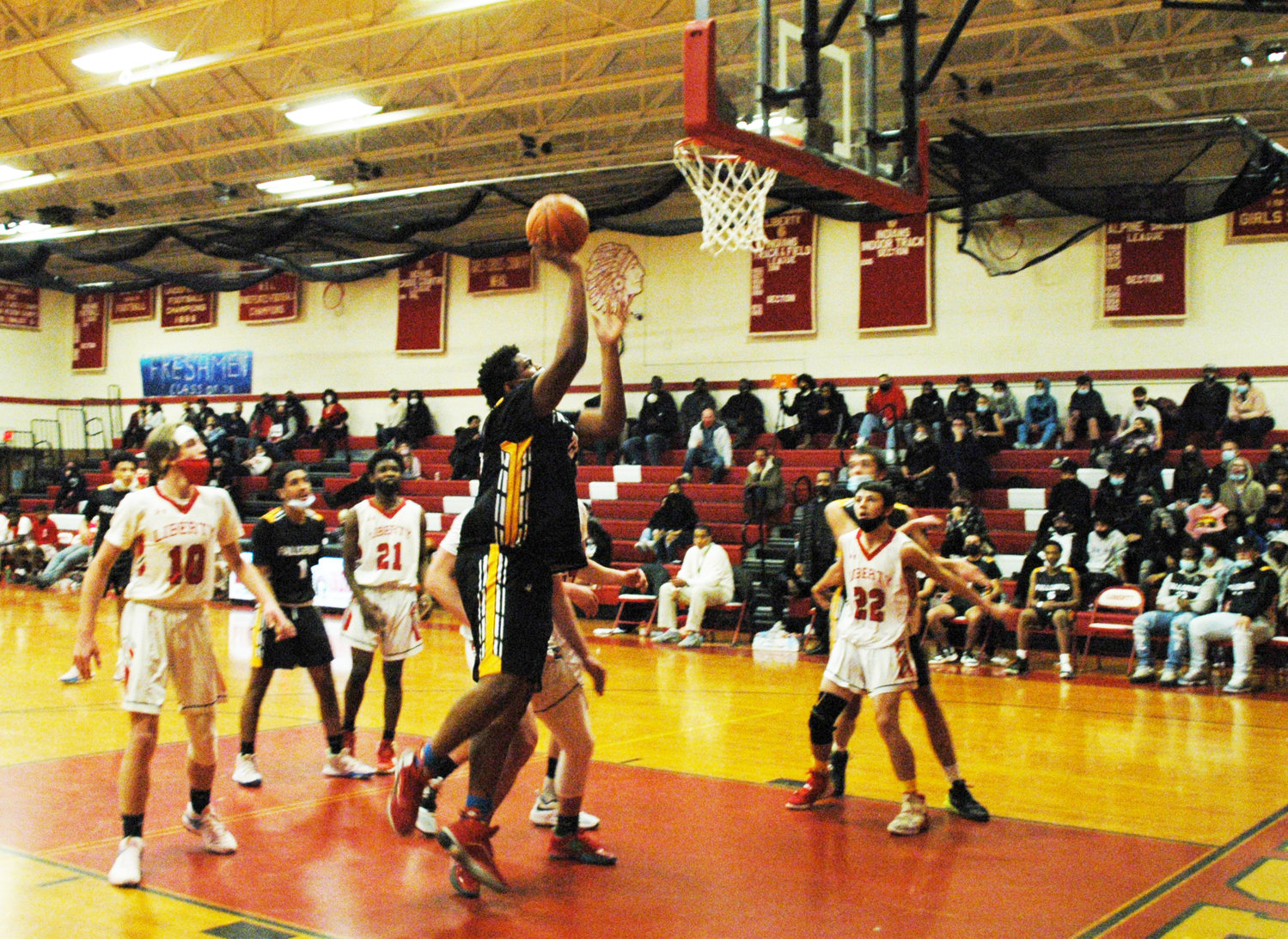 Fallsburg’s Akinde Bryan scored 6 of his 11 points in the fourth quarter in a road win over division rival, Liberty.
Anthony Morgano | Democrat 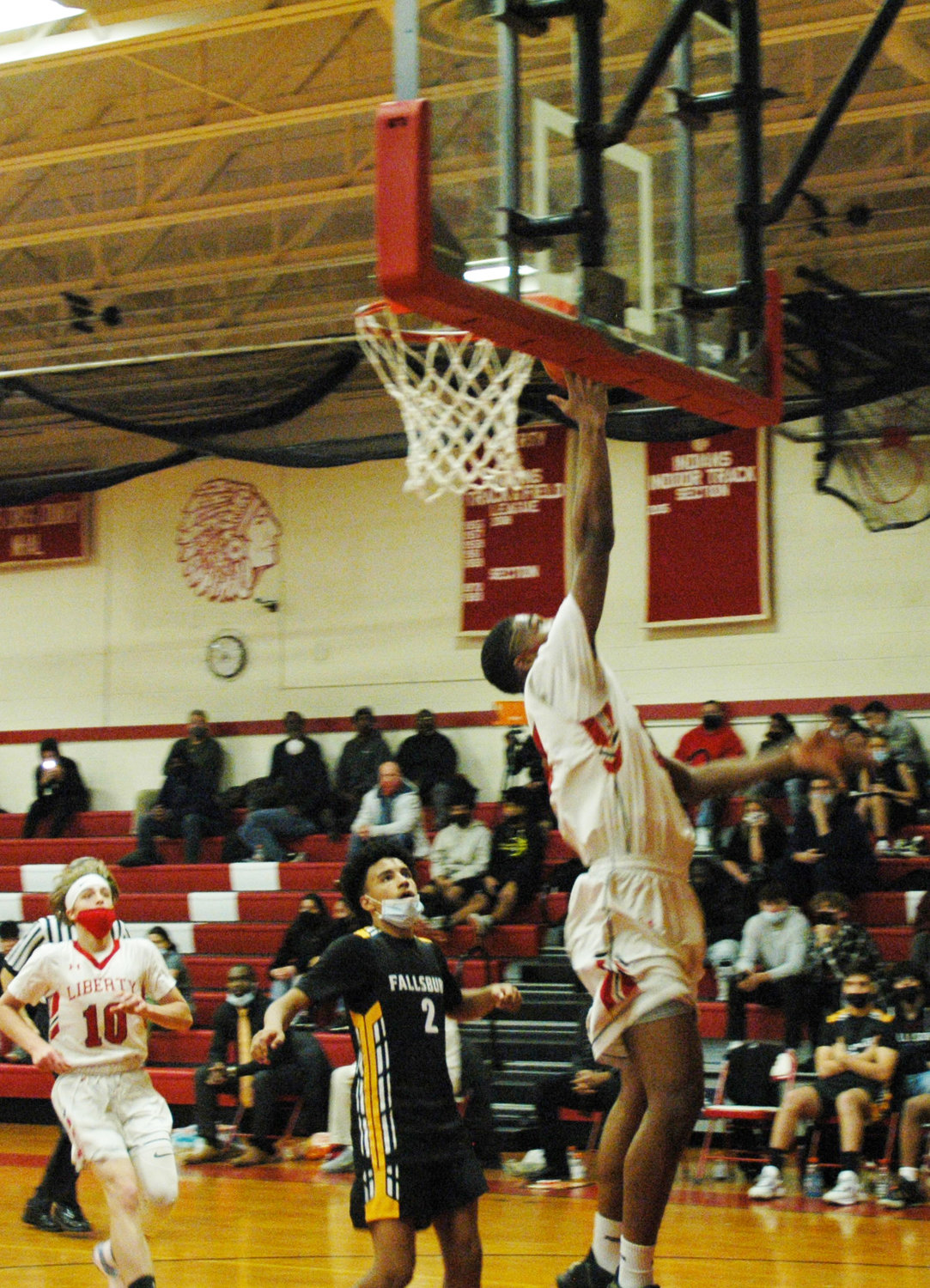 Liberty’s Nasir Gibbs had 11 points in the first half before fouling out in the third quarter against Fallsburg. His absence was felt as the Indians were outscored 20-14 in the second half.
Anthony Morgano | Democrat
Previous Next
Posted Friday, January 7, 2022 6:20 am
Anthony Morgano

LIBERTY – Two teams looking to kick the year off right, the Comets were on the road to face the Indians in a division matchup. The rivalry did not disappoint, and when the final buzzer sounded on the back and forth battle, Fallsburg stood standing, defeating Liberty 43-37.

The energy in the gym was palpable. Starting with an electric Jv game, in which the Comets won 51-47, the two varsity teams were passed the baton and carried that energy throughout their game as well.

Liberty started the scoring, but it was Fallsburg that finished the quarter with the 12-10 lead.

The second quarter turned into a battle of runs. After each team reached 14 points, Liberty took over with a 7-0 run. After leading 21-14, Fallsburg had a 9-2 run, and the two teams were tied at 23 going into halftime. Liberty’s Nasir Gibbs led all scorers with 11 points, but early foul trouble sidelined him for a portion of the second quarter.

Gibbs got his 4th and 5th foul in the third quarter, ending his night early. Fallsburg’s opportunistic offense took advantage of the foul trouble and started the third quarter on an 8-0 run.

Trailing by 8, Liberty closed out the final three minutes of the quarter on a 5-0 run, closing the gap to a more reasonable three point deficit, 31-28, at the end of the third.

The two teams continued to go back and forth in the final frame, even tying briefly at 33. At the halfway mark of the quarter, Fallsburg called a timeout while leading 39-34. Liberty knocked down a three to bring the score within two, but Fallsburg scored the final two buckets of the game, and completing the road win.

“We played well tonight,” said Chase Alexander, first year coach for Liberty. “We missed a lot of open shots and we deployed our press too late, but we’ll get to see them again.”

Fallsburg’s coach Lionel White was happy with his team’s performance, “We played good, fundamental defense. The boys kept their composure in a hostile environment and brought home a win against a division rival.”