LOCH SHELDRAKE - For the first time this winter season, local runners, jumpers and throwers got to compete on the record as the Sullivan County Indoor Championships got underway on February 7. … 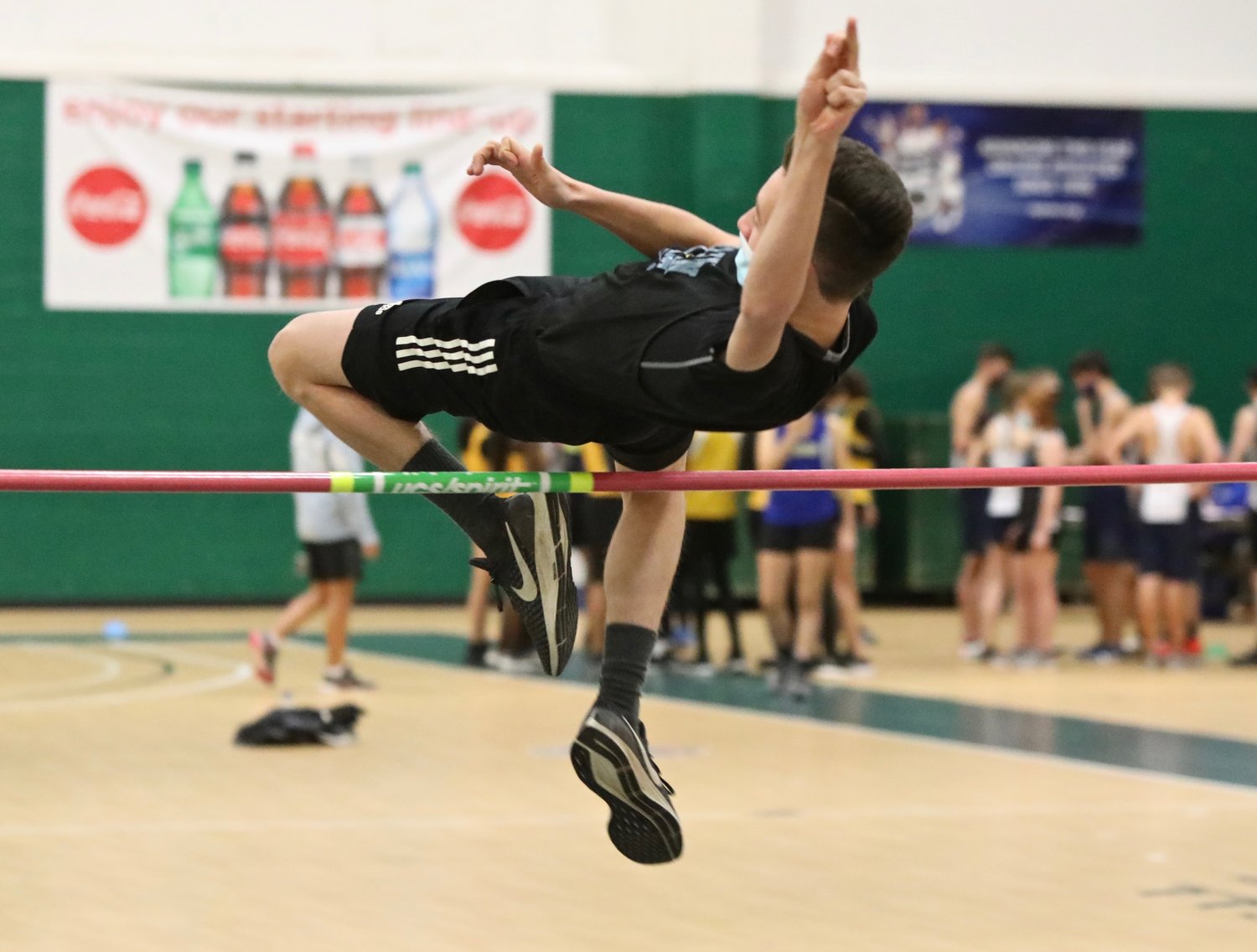 Sullivan West’s Dominic Perez clears the bar at 4-10 for a second-place finish.
Richard A. Ross | Democrat 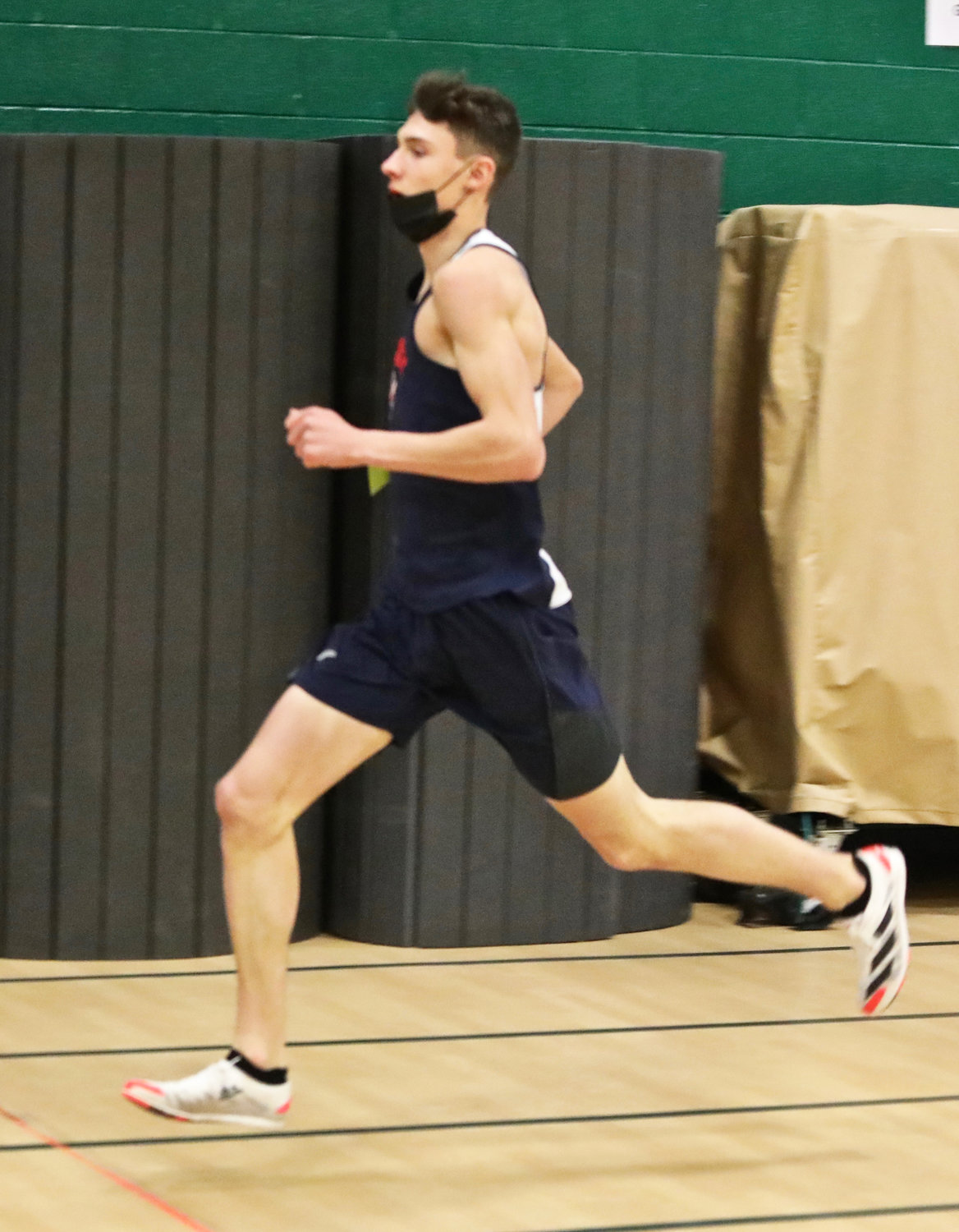 Tri-Valley junior Adam Furman shows his mettle winning the 1000 and 1600. Furman is ranked #2 in the state in the Class D in the 1600 but first in 3200 with his recent time of 9:37.69 set at the Ocean Breeze Athletic Complex in the Freedom Games on February 8.
Richard A. Ross | Democrat 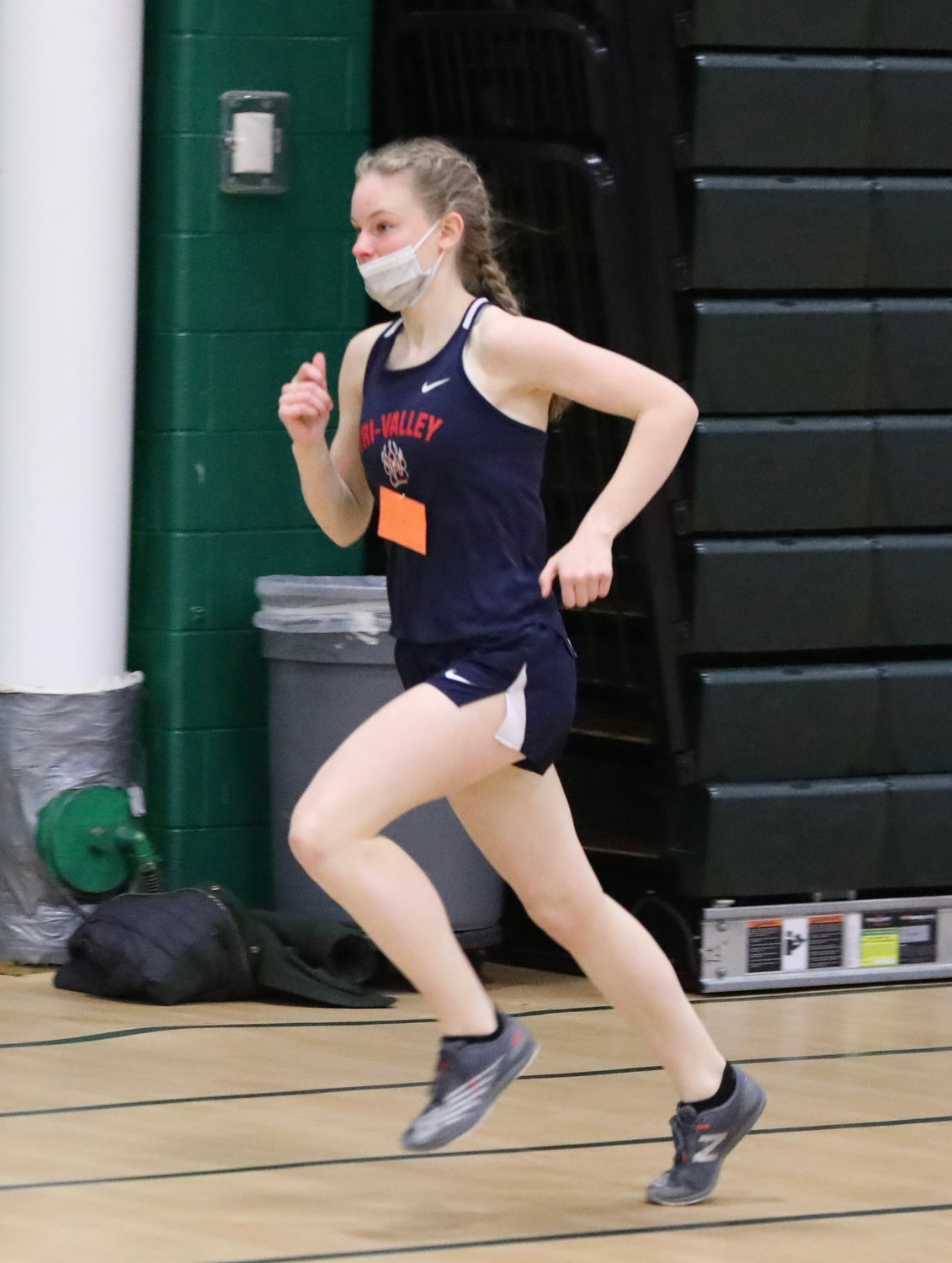 Tri-Valley’s Amelia Mickelson authoritatively wins the 1000 and went on to capture the 1500.
Richard A. Ross | Democrat 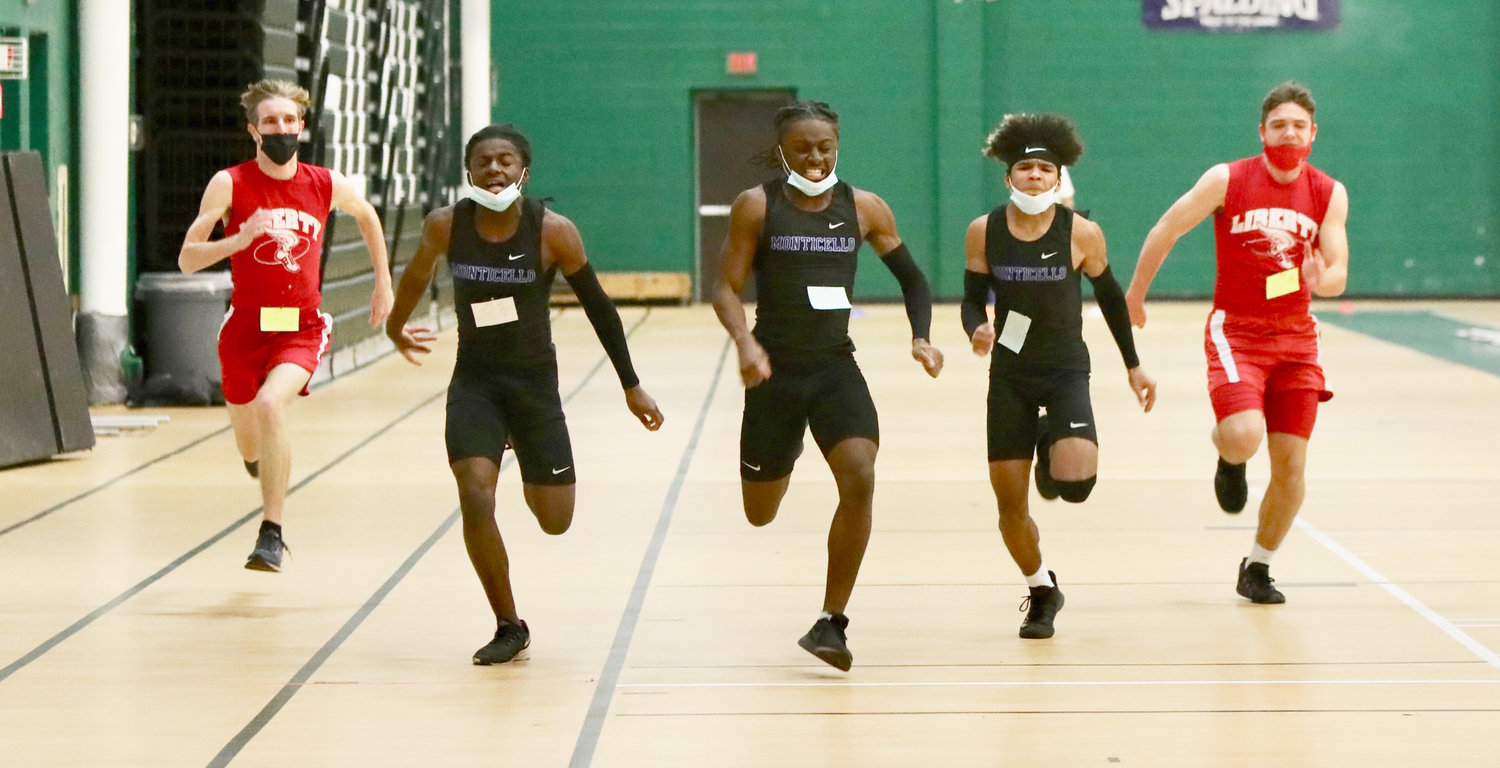 Monticello twins Jajuan (center) and Jadon Suasey finish 1-2 respectively in the 55. Jadon evened the score with his brother capturing the 300.
Richard A. Ross | Democrat 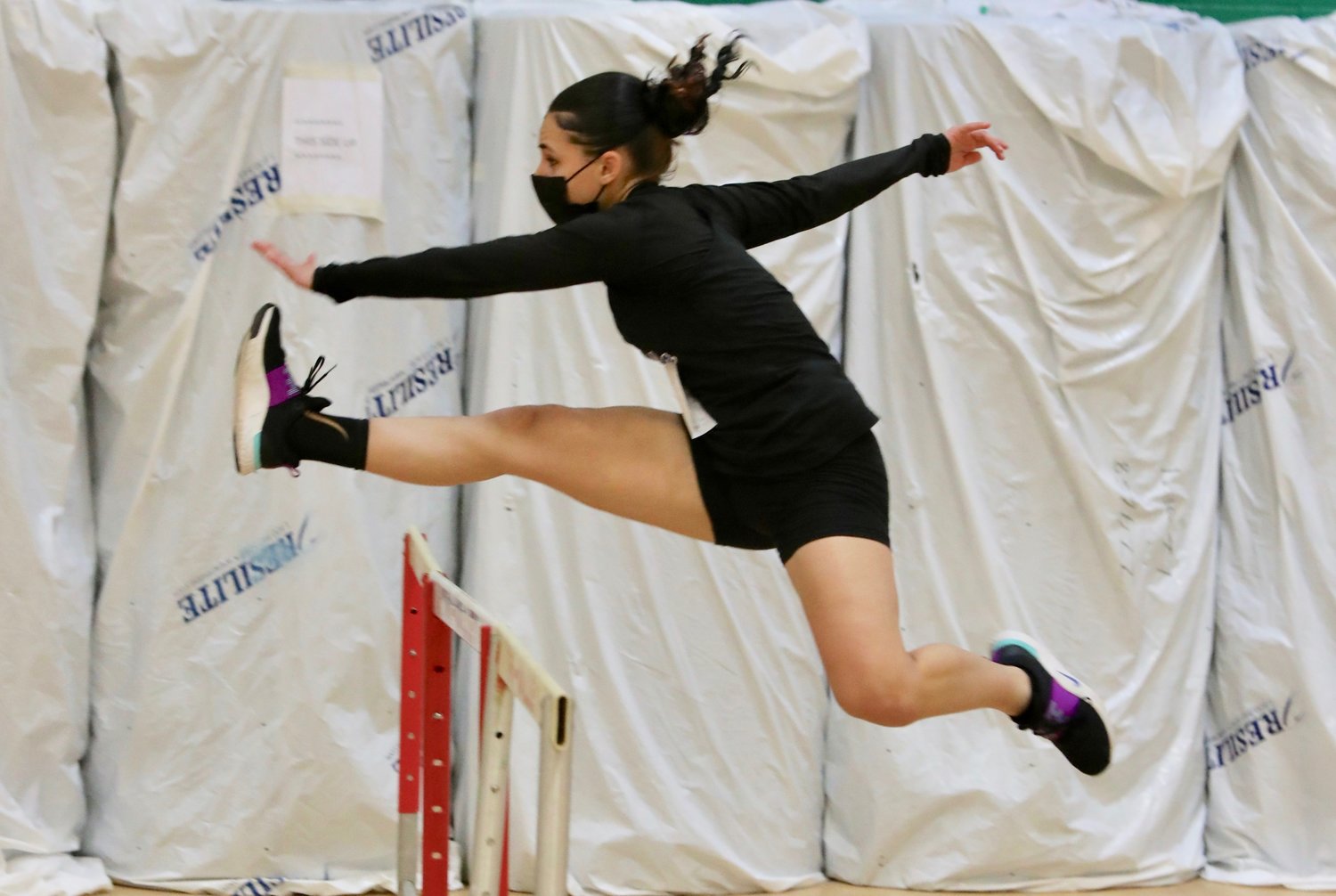 Monticello’s Gabby Jones profited from a disqualification of teammate standout Taina DeJesus to prevail in the 55 hurdles.
Richard A. Ross | Democrat
Previous Next
Posted Friday, February 11, 2022 6:20 am
Results

LOCH SHELDRAKE - For the first time this winter season, local runners, jumpers and throwers got to compete on the record as the Sullivan County Indoor Championships got underway on February 7. Considering last winter there was nothing due to Covid, this was certainly a step in the right direction.

The County Championships have always served as the opening salvo of the season’s cavalcade of big meets. But with no meets at West Point any longer, the OCIAA clashes that used to create high drama at Gillis Field House no longer take place. Thus, the indoor season for Monticello, Liberty, Fallsburg, Tri-Valley, Eldred and Ellenville was played out in a series of once-a-week developmental meets at the college.

To say indoor track has lacked its prior fervor would be an understatement. Not only are the numbers down, but the level of competition has also suffered from a lack of meets with other schools. All this said, you compete where and when you can. One can only hope that a normal slate of meets in the spring will breathe life back into the sport which, in its grander moments rivals no other. For the serious year-round runners, indoor is a key lynch pin between cross-country and spring track.

Historically, kids who take off in the winter have a hard time catching up to the curve in the rapid-fire spring season. For Section IX, things have not gone well in general. The outdoor meets set for Woodbury Commons never took place due to the weather. This came as no surprise. Tri-Valley and Monticello did get in a couple of outdoor meets to add some dimension to the local season. But the winter weather, as expected, soon put that to rest.

This past weekend, the divisional meets which formerly took place at West Point unfolded at Ocean Breeze Athletic Complex in Staten Island, the site of the state meet slated to be held on March 5. With a late start time, Sullivan West with only a few athletes, is not even going. That will leave Tri-Valley to dominate Class D, which they would anyway. Following that will be the state qualifier at the Armory and then states. But for a sizable number of winter tracksters, this county meet was their last chance to garner personal records or win a medal.

Several years back, the Sullivan County Indoor Track Championships were part of the sport’s late season trifecta of meets, along with the divisional and sectionals. This year, Section IX is not having sectionals, another example of the lackluster caliber of a sport that normally had Gillis Field house quaking with excitement as the races, throws and jumps took center stage. Of course, the schools are more than grateful to SUNY Sullivan for opening its doors each week. Were it not for the gracious welcome, there would literally be no other venue. While there are areas for high jump and shot, the high impact events such as long and triple jump, discus and weight throws as well as the spectacular allure of the pole vault are all absent.

One last item to point out is that for years, the County Meet was a team as well as an individual competition. That changed as the smaller teams could never equal the depth of the better endowed teams of Monticello, Ellenville, Sullivan West in its golden era or Tri-Valley. Thus, the team competition was scrapped. All this to explain the results listed below. There were few surprises in the outcomes. Generally, the same kids who have won their events in the developmental meets stepped up this time when it counted.

One exception to that was Monticello standout hurdler Taina DeJesus who was disqualified in her preliminary heat, thereby opening the door to teammate Gabby Jones to capture the gold. As expected, Tri-Valley with its greater depth and talent captured its fair share of gold, silver and bronze honors. Leading that charge was junior Adam Furman, a state contender in indoor and outdoor track and a state champion this past fall in cross-country. Furman won the 1000 and 1600. His premiere event, the 3200, is not staged at the college. Lady Bear Kendall McGregor who has had near misses at a PR of 4-6 in the high jump, got that milestone on her first attempt and then went on to clear 4-8. That was very impressive. Amelia Mickelson continued her rule in both the 100 and 1500. An interesting pairing in the boys 55 finals pitted Monti twins Jajuan and Jadon Suasey against each other. Jajuan edged his look alike by a tenth of a second. Jadon went on to win the 300. The Sullivan County Democrat coverage of the indoor season will continue with reporting of the divisional and state qualifier as well as the state meet if county athletes qualify.