LAKE HUNTINGTON -- “Sometimes you will never know the value of a moment until it becomes a memory,” posited Dr. Seuss. 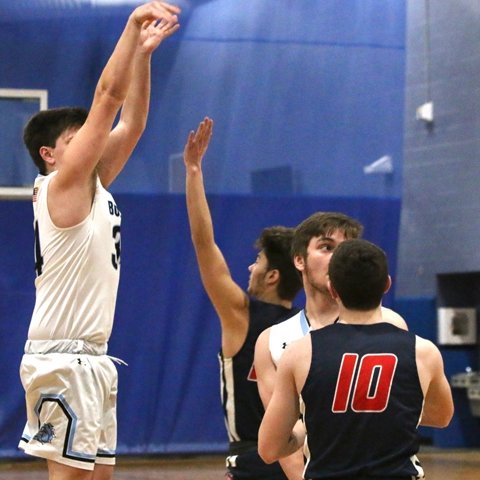 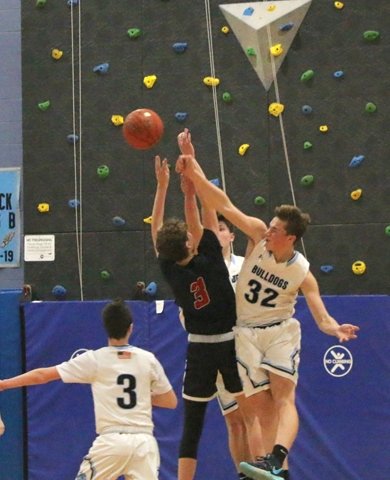 Sullivan West's Ryan Mace goes aloft to deflect a shot by Andrew Cox. He fouled Cox in the act but T-V's inability to convert needed free throws contributed to their loss.
RICHARD A. ROSS | DEMOCRAT 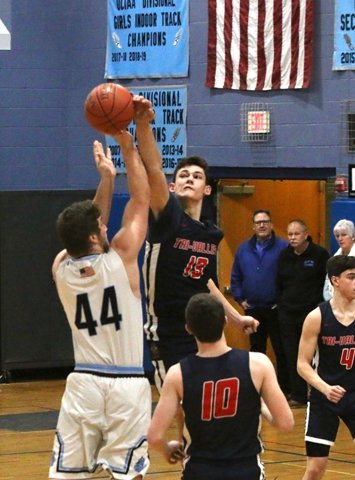 Sullivan West senior Gabe Campanelli goes up for a shot and is fouled by Tri-Valley's Thomas Lynch.
RICHARD A. ROSS | DEMOCRAT
Previous Next
Posted Thursday, January 30, 2020 12:00 am
Richard A. Ross - Reporter/Photographer

LAKE HUNTINGTON -- “Sometimes you will never know the value of a moment until it becomes a memory,” posited Dr. Seuss.

For the Sullivan West Bulldogs facing the do-or-die challenge of either beating Tri-Valley to punch a ticket to the sectionals or watch their postseason hopes essentially vanish in a stultifying home loss, the magnitude of the moment came profoundly as the final buzzer announced their 49-43 hard-fought victory.

With it came the commensurate joy and relief of attaining a goal they have clung to in a season defined by more losses than wins. By virtue of sweeping their two league games against the Bears, they offset their two league losses to the S.S. Seward Spartans and assured their passage into the afterlife of the postseason. For the visiting Bears, the outcome of this game bore no such finite consequences. Coming in at 7-3, their sectional hopes were riding principally on reaching a .500 record or better overall. The prospects for that still look extremely promising. Another win against Seward would close the deal. Either way they should be in the Dance.

This game was up for grabs from wire to wire. Tied numerous times, each team found ways to answer the other's runs or attempts to forge ahead. The most either team led by was seven points.

Sullivan West played its best defense of the year, especially on the interior, denying Tri-Valley access to much of the paint and challenging the Bears to fire from the perimeter. Once again, as in their previous encounter, the Bulldogs' rebounding, a function of size and aggressiveness, proved to be one of the factors that led to the victory.

For their part, Tri-Valley canned ten three-pointers on the night to keep it close and to even go ahead in spots. Basketball is a game of runs and this game would have its share of those flurries. In the first quarter which ended with T-V leading 9-7, the Bears went on a 7-0 run after trailing 7-2.

Three-pointers from Jonathan Maori and Austin Delaney answered the Bulldogs early lead fostered by threes from Owen Sager and Cody Powell. Withstanding runs and turning the tide is essential to basketball prominence. In the second quarter the Bulldogs lit it up with 16 points to Tri-Valley's eight. While the Bears once again marshaled a pair of threes with one each from Delaney and Noah Hendrickson, they were doubled up in the stanza courtesy of Sager's two swishes from beyond the arc, one more from Powell and four points in the paint from big man Chris Campanelli.

The Dawgs led 23-17 at the break. The third quarter evinced a shift back as the Bears found their perimeter assets working again to foster a 14-8 advantage which ended with a 31-all tie as the fourth quarter loomed. A pair of threes from Andrew Cox were bolstered by long range buckets from Maori and Hendrickson. Sullivan West turned to Gabe Campanelli's strength in the paint for four points while Ryan Mace and Powell added a bucket apiece.

In many games, the final outcome comes down to free throws. Coach John Meyer wisely inserted Daniel Hemmer into the lineup for that very asset and he delivered hitting six for eight from the stripe. Those very points turned into the margin of victory. Sullivan West's furious fourth quarter netted an 18-12 advantage and the commensurate victory.

In addition to Hemmer's six, they got seven from Powell who ended up with a game-high 16. That late contribution included his third trey of the night, a bucket and a pair of made free throws.

Gabe Campanelli's resiliency in the paint provided two buckets and a free throw. The Bears answered repeatedly coming within two points with 16.9 seconds remaining. Missed free throws and failure to finish on breakaway layups would be part of their epitaph. Cox gave them four points in the final stanza, a lone three from Delaney who offered up quite a few from deep space, Hendrickson's trey and a bucket from Lynch completed the scoring.

Ultimately Tri-Valley got 11 from Cox and Hendrickson and ten from Delaney. The Dawgs netted 15 from Powell and 11 each from Campanelli and Sager. Sullivan West was 11-for-21 from the line (52 percent).

The Bears fell to 7-4 (1-2). They have their remaining league game, a home fray against Seward on February 4. They beat the Spartans in Florida by 13 points in their last encounter. They face Roscoe at the BCANY vs. Cancer Classic today at 4:30. For the Bulldogs 4-8 (2-2), the 48-41 loss to Ellenville featured a closer game than most would have predicted.

Their next fray is a tilt with Eldred on February 1 at the BCANY vs. Cancer Classic. A mix of winnable games and daunting challenges remain before the sectionals get under way in late February.

Tri-Valley Coach Kevin Delaney summed up the facets in coming up short. “Foul shots were a factor.” The Bears were seven for 14 from the stripe (50 percent). “We didn't get the big rebounds when we needed to or that one key stop. They came to play,” he averred crediting Sullivan West which fed off its fervent crowd, albeit a diminished one with the girls away at T-V.

Sullivan West Coach John Meyer noted, “This was a really hard-fought game that could go either way. We told them at halftime it's going to come down to the last two minutes and making foul shots. That's why we run. That's why we practice. Everybody stepped up. We looked at some mismatches. They didn't get down when we fell behind and they knew what the goal was. We had 32 minutes to get where we wanted to be. Owen, Cody, Gabe and Danny gave us all they had. I wouldn't be shocked if we end up playing Tri-Valley again,” he noted.

Delaney also considered that a possibility. At this juncture it's far too early to say what the brackets will look like but Sullivan West by virtue of beating the Bears twice will be a higher seed.