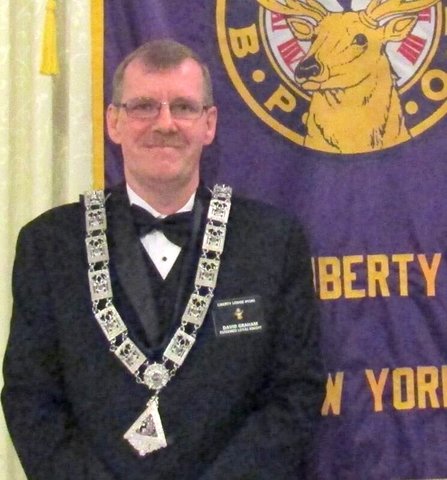 Both leagues are at the Kiamesha Lanes Bowling Center.

Graham got into the sport of bowling at the age of 18 but never bowled in a youth league.

His first adult bowling leagues were with his cousins the Ackerly family and the Curry family in two leagues, the Tuesday Mixed Firemen and the Friday Mixed league somewhere around 1986.

David has bowled three 300 games and three 800 series and presently holds down a 214 average in the Tuesday Mixed Firefighter league and a 202 average in the Friday Mixed league.

Graham noted that he has never bowled in a Professional Bowling Association event but has “bowled in a couple of Pro-Am bowling tournaments just for the experience.”

Employed as an Alarm System Technician by the PN Fire & Burglar Alarm Company for over 20 years, he installs and services fire alarm systems.

When asked what it is like bowling today with the COVID-19 restrictions David said, “It is tough and the socializing aspect of bowling has been reduced to sitting at your table only.”

“I wear a mask while bowling as does every member of the league," Graham said.

David is married to his wife, Shannon.

Francois Lavoie rolled a perfect 300 game in the PBA Playoffs Round of 16 to become the second player in PBA history to have bowled two career televised perfect games in title events. Lavoie joins Sean Rash, the man he eliminated, on the exclusive list.

“A lot of people asked me after the U.S. Open if I was nervous,” said Lavoie, referring to his first televised perfect game in the 2016 U.S. Open semifinal match.

“I was definitely nervous. It was the same thing today. I was still very nervous and I'm glad I was able to come through again.”

“I bowl my best when I'm able to create some miss room in the middle part of the lane,” said Lavoie. “In the last two matches, I've been able to do that. I took a look at the bracket before we started and I knew it was going to be a tough road, and it has been so far. I'm sure it will be from the next match on, but I'm ready to keep going.”

Lavoie's 300 was the 29th televised perfect game in PBA history and third of the 2020 PBA Tour season, joining Tommy Jones, who achieved perfection in the championship match of the Hall of Fame Classic in January, and Jakob Butturff, who bowled 300 during the qualifying round of the PBA Tour Finals in July.

This week we will talk about the release and offer information that will help bowlers of all levels.

A properly executed release is possibly one of the most understood parts of a bowling shot. Most bowlers want to muscle the ball through the release zone and they do this by accelerating or decelerating on the downswing.

The proper release for all bowlers is executed by letting gravity bring the ball from the top of the swing through the release zone with no interference from your arm or shoulder muscles.

If the ball fits properly, the gravity will take it off your hand at the right time providing your body is in the proper position. Any rotation on the ball should come from your hand only....not your arm.

Using the proper technique will allow you to get as much rotation on the ball as desired.

When your bowling ball does not fit properly this is where it will require excessive grip pressure to hold on to which will make the release harder to execute.

Gravity can be your best friend or worst enemy depending on how you use it.

Logan Emerich was denied perfection by a stubborn 10 pin in the Wednesday Night Independent league. Bowling for the Delco Fitness team Logan scored ll strikes in a row for a near perfect 299 game. According to Fox Bowling Center owner-manager Bill Gleim Logan made a great shot on his 12th ball but the nemesis of all right handers (the 10 pin) refused to fall. He finished with a 217 for a 709 series.

Ed Townsend is a Public Relations Consultant to the sport of bowling and brings over 60 years of sports journalism experience in writing and compiling the information for this column. If you have league or tournament information, bowl a 300 game or 800 series, let Ed know at 845-439-8177, email at bght75@gmail.com or fax at 845-205-4474. View this column and Ed's photos at http://bght.blogspot.com We are also on Facebook and Twitter.