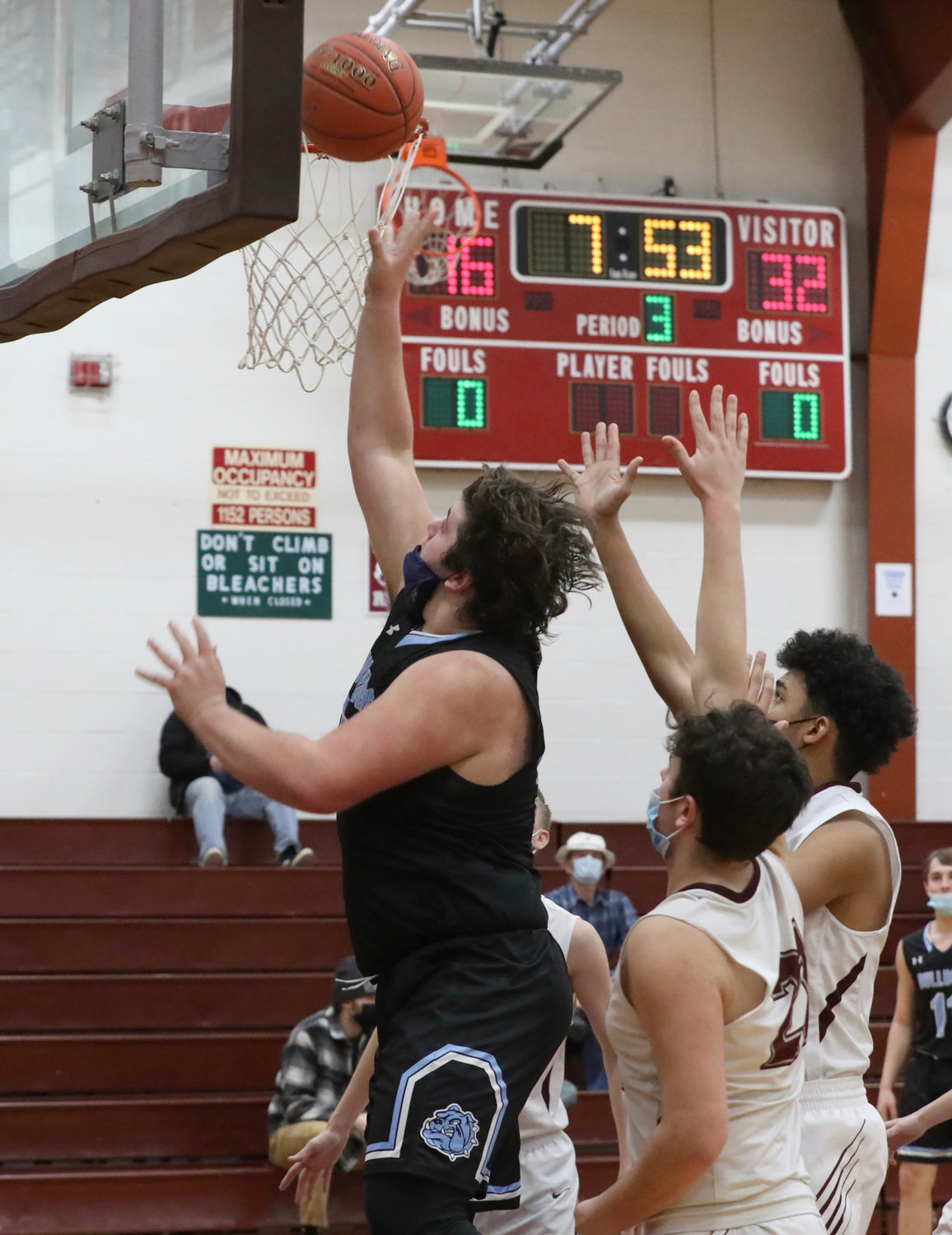 Sullivan West’s Chris Campanelli uses his size disparity to score two of his 11 points in this third quarter show of strength.
Richard A. Ross | Democrat 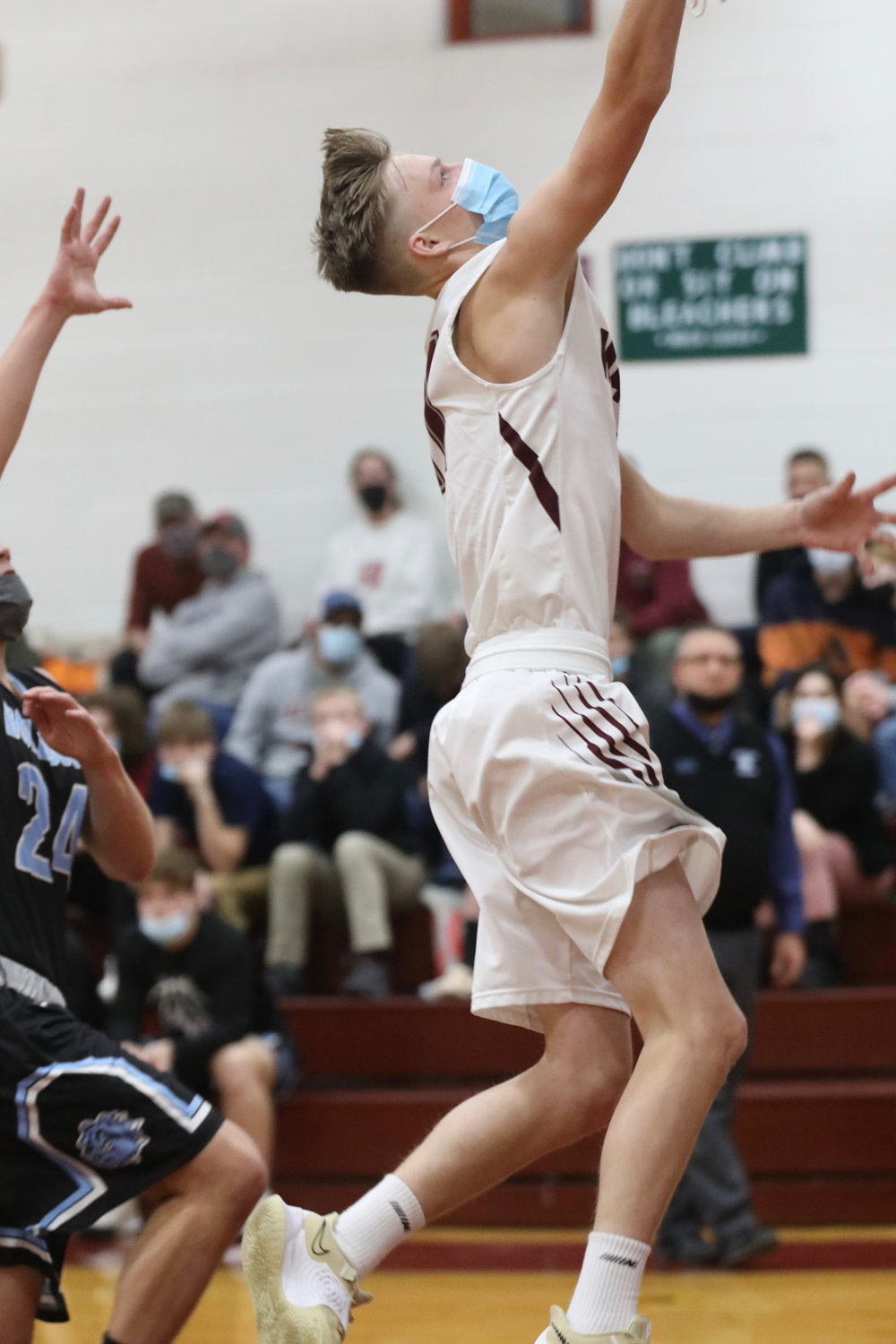 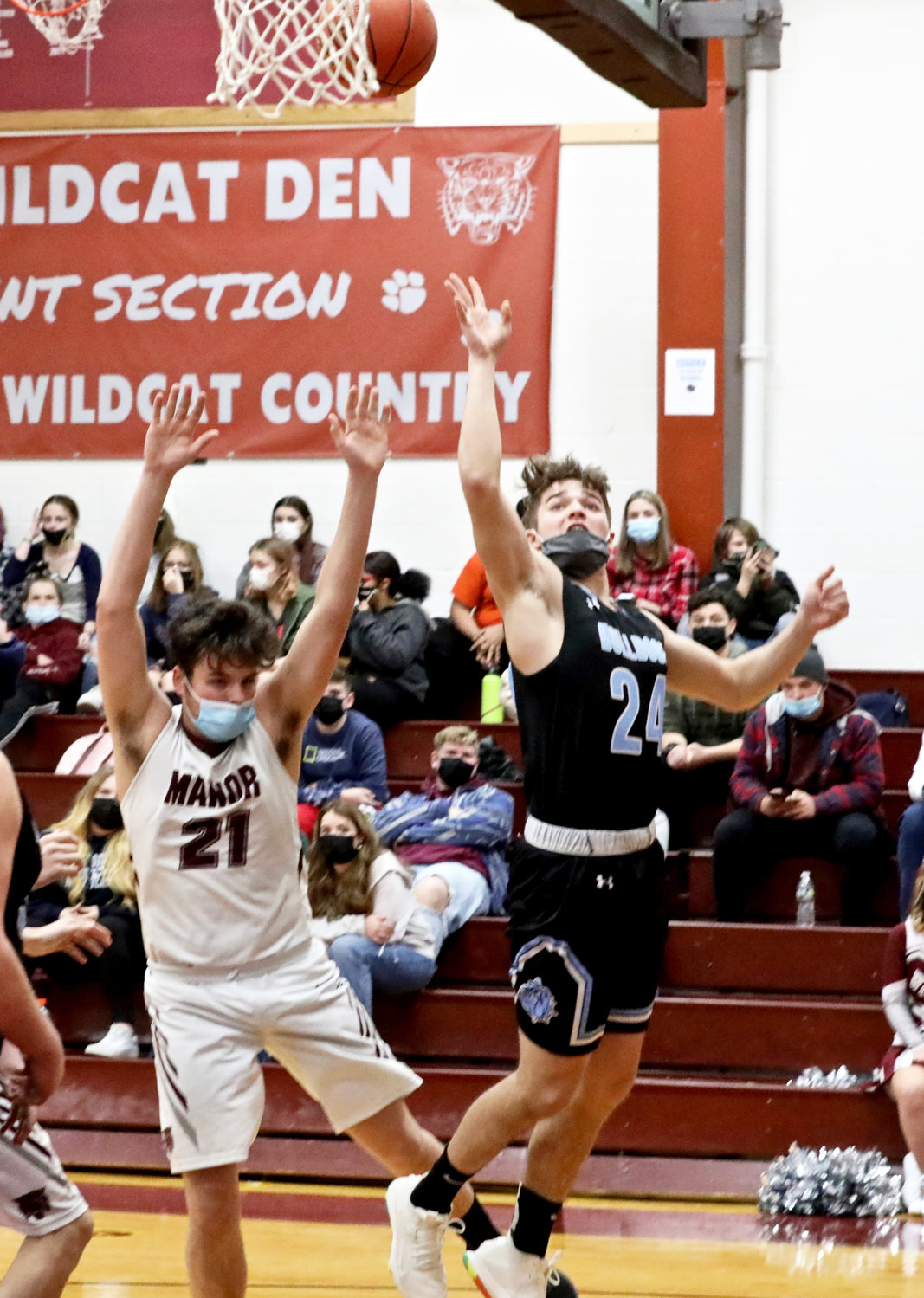 Sullivan West’s Dylan Sager gets inside position on Manor’s John Schroeder and scores two in the early going.
Richard A. Ross | Democrat
Previous Next
Posted Tuesday, January 25, 2022 6:30 am
Richard A. Ross

That’s this week’s nickname for the Sullivan West boys basketball team as they authoritatively swept a trio of non-league opponents handily beating Chapel Field and Eldred before completing the trifecta with a dominant 53-36 win over Livingston Manor. After suffering a drubbing at the hands of Monticello in last weekend’s Fred Ahart Foundation Games, the Dawgs turned the tables on the trio of Class D opponents with center Chris Campanelli creating a problem for opponents in the paint just as he did on the gridiron this past fall. The “big fella,” as he is affably regarded following his selection to the New York State Sportswriter’s Association first team Eight Man Football All-Stars thrives on rebounds and put backs and his trips to the foul line. But the Bulldogs’ success is not a one-man gambit, it’s a function of improving team chemistry which bodes for a watchful eye with the foray of coming league games against Tri-Valley, S.S. Seward and a rematch with powerful Chester.

As to the Wildcats, coached by Charlie Hicks since Adam Larson relinquished the reins to take over the joint Athletic Directorship of both Manor and Roscoe, they played hard and gave a great effort, but they were overmatched by the larger school’s prowess. Sullivan West doubled up Manor in both the first two quarters with outputs of 16-8 in both stanzas to amass a 32-16 lead at the break. In the third period they outscored the ‘Cats 17-9 to widen the lead to 49-25. SW Coach John Meyer emptied his bench in the fourth quarter to give his other players valuable minutes. Campanelli led the Bulldogs with 11 points, while Dan Shami had nine and Jacob Hubert and Tariq Gambari posted eight apiece. The Wildcats were paced by Joseph Gould’s 11 points and Matthew Bowers’ nine. LM was five-for-six from the stripe (83%) while SW was ten-for-14 (71%). Manor fell to 2-7 while Sullivan West improved to 5-3.

Wildcats assistant coach Josh Evans was pleased with his team’s effort. “They hustled the whole game. I’m impressed with how they did. Playing bigger schools like this always shows us what we need to work on and obviously there’s a lot of room for improvement, so hopefully we’ll make a run in the post season.”

Manor is 2-1 in the division with wins over Chapel Field and Eldred and a narrow loss to Roscoe.

SW Coach John Meyer said, “We played well tonight. We got the ball inside and made shots. We played much better defense but we still need to cut down on our turnovers. Everybody stepped up and hopefully we’re peaking. We have Roscoe on January 24 and Tri-Valley on January 27.”