Diaz drives by Tri-Valley in historic win for Liberty

GRAHAMSVILLE - Just a few hundred feet from where blackboards help dish out daily dosages of formation, Tri-Valley and Liberty were taking part in a gridiron lesson in …

Diaz drives by Tri-Valley in historic win for Liberty 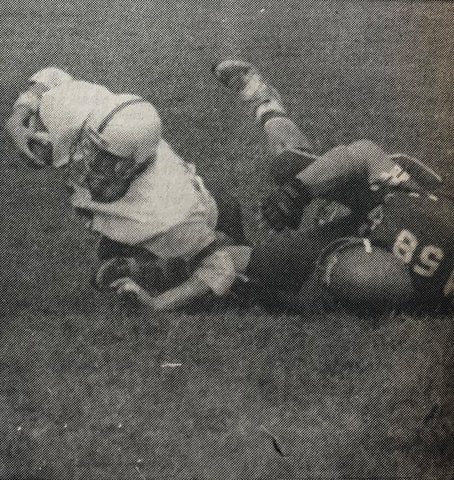 GRAHAMSVILLE - Just a few hundred feet from where blackboards help dish out daily dosages of formation, Tri-Valley and Liberty were taking part in a gridiron lesson in history.

For the Indians, history was being rewritten, as they became the first Liberty team to defeat the Bears in Grahamsville, coming up with a decisive 19-6 victory to remain tied for first in the Western Sullivan League (2-0, 2-1).

For the Bears, they appeared to be content with reliving their recent history, instead of thinking ahead to the future at hand.

“We weren't mentally ready for this game,” said Tri-Valley coach Mike Shea, who admitted last week's surprise win over Jeff-Youngsville might have been a distraction for his squad, and himself.

“Beating Jeff was still in our minds. Certainly the intensity wasn't there in practice this week as it was for Jeff. Maybe all of us, myself included, enjoyed the game too much,” added Shea whose Tri-Valley evened their league mark to 1-1.

Liberty wasted little time in changing the course of their past history against the Bears, scoring on their first two possessions and going into the half with a 13-0 advantage.

As they had settled on the week before, the Indians won the toss, but decided to kick off to the Bears. “We figured that if we won the toss, we would kick and put them in a hole,” explained Liberty assistant coach Jim Tanous, who along with coach Phil Fanning were subbing for head coach Ed Riente. “We figure not too many teams would score on our defense.”

The Indians brain trust couldn't have been more correct, as the Bears managed only five yards on their first series and were forced to punt the ball. Liberty began at their own 42, then through a series of running plays, moving the ball to the Tri-Valley 12 for a first down.

Junior Rex Diaz, who would have his finest football day, carrying the ball 19 times for 133 yards, moved the ball this time to the three. Mitchell Cruz would then give Liberty a first and goal from the one, and two plays later Cruz went up the middle to give Liberty a 6-0 lead.

Diaz connected for the PAT, and with 5:28 left in the first quarter, the Indians were in front 7-0.

This time Tri-Valley received the ball on their own 19, but Indians Robert Barber and Scott Warren teamed up to sack Bears quarterback Darin Kinney back at the 3, forcing Tri-Valley to again punt. Kinney would be sacked three times in the first half, and would lose 42 total yards in rushing.

Liberty was again in perfect field position, beginning at the Bears 27. A pair of personal fouls on Tri-Valley and a few running plays by Diaz left the Indians at the three-yard line as the first quarter ended.

The two squads moved down the field, but the change in position had no effect on the Indians' Diaz, who carried the ball into the end zone in the opening seconds of the second quarter to put Liberty up 13-0.

“I was getting excellent blocking all afternoon,” said Diaz, who began on defense last year for Liberty, but was quickly out for the season when he broke his wrist in the second game of the year.

“All week we felt that we could beat them. It didn't matter what they did to Jeff. Hey, we're Liberty, the defending champs, and we just wanted to do our job,” added Diaz.

And the Indians were nearly perfect in handling their job in the first half, when, with 10 minutes left in the half, Kinney was sacked for the third time, which forced Tri-Valley into a third down quick punt from their own three.

In their finest defensive showing of the afternoon, the Bears, with their back to the wall (in this case the endzone), held their ground as Liberty had a first as far as fourth and goal from the three, but were stopped at the line of scrimmage.

It appeared the tide would be turning for the Bears, who again were forced to punt the ball away after holding Liberty. Still in good field position, Liberty got as far as the Bears 25, but Diaz was short on a 35-yard field goal try.

Again the Bears could not get past their own 20, and kicked the ball back to Liberty. With less than two minutes before intermission, Phil Rotella intercepted the only pass attempted by Liberty quarterback Brian Mungeer, and ran the ball back 43 yards to the Indians 30.

But as their luck would have it, Warren would strip the ball from Erik Coddington just before the half, giving the Bears just another thing to discuss in the locker room.

“Sometimes the best part of our game is at the half,” admitted Shea afterwards. “We use the time effectively, trying to re-organize. And we did our job.”

The Bears were a different team in the second half as was Liberty, who had to use Tod Kunpil as quarterback when Mungeer twisted his ankle. Tri-Valley finally managed to score at 5:27 of the third quarter, when Rotella ran down the right sidelines for a 35-yard score.

On the day, Rotella would rush for 51 yards while the Bears could only manage 115 total yards in the game. Kinney was sacked on the two-point conversion try, but the bears were not within striking distance at 13-6.

But the final straw for the Bears came at the opening of the fourth quarter, when Diaz broke away from several tacklers and took the ball down the sidelines 60 yards for a Liberty score. The points would be the final ones on the afternoon for either squad, but they were enough to keep Liberty tied with Roscoe for the early first place lead in the WSL with perfect 2-0 records.

“It's tough for them to play at the same level they did against Jeff every weekend,” added Shea. “But there's still a lot of football left. There's no reason that this defeat should hurt us for the rest of the season.”