Did my vote count?

Did my vote count? 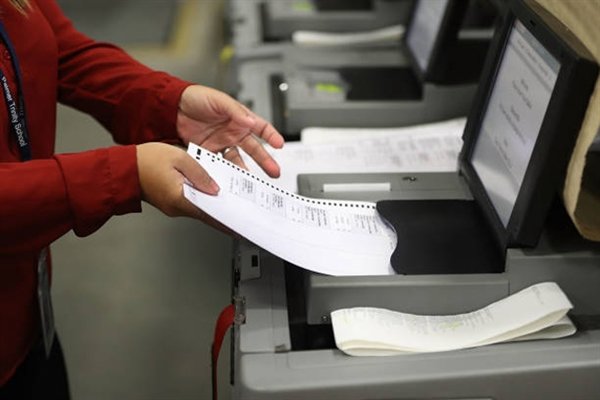 This photo shows a completed voter ballot being fed into an optical scanner which verifies to the voter that his vote was recorded.
CONTRIBUTED PHOTO
Posted Monday, November 16, 2020 12:00 am
Ed Townsend - Columnist

VOTE…it's the right thing to do…America's voting systems are all technologified now and there are no more punch cards and hanging chads so we all jump with joy at the optical scanners after we fill in the small circles on the ballot.

Well it all happened suddenly after we penciled in (filled in the circles on our voting ballot) and were about to put our completed ballot into the scanner counting machine.

“No the machine is not working…just drop it in the opening slot in front of the box and they will count them tonight,” we were told by the pole worker.

Now this is not the way to be sure and confident that your vote is being counted and verified and no one at the voting station was going to verify that my vote was safe by dropping it in the open slot in front of the optical scanner which if working would veriOK…there was not a waiting line nor was it crowded at the voting station so I stood there a moment, trying to be patient…not wanting to create a situation and said to myself put the damn ballot in the slot, it might be tabulated later or who knows what will happen to it.

Now I know that there has to be some trust that the right thing will be done and my vote was later counted but, in today's world with all that is going on and allegedly going on, you walk away and cross your fingers.

And then guess what happened next…I called several of my relatives in Liberty and at one of the voting districts a scanner counting machine was not working and voters were being told to drop their ballot into the slot in front of the machine…another question mark in the face of voters who could not see their vote recorded and verified.

The technology used in voting continues to evolve, it remains vulnerable to both malicious and unintentional errors…to protect the system election officials need to be able to check and double-check the election results and verify that when scanner counting machines are used the voter can be guaranteed his vote was counted.