Sixty-eight-year-old Hancock bowler Donald John Marino has been a crafty left-handed superstar for many years and made his mark bowling over the years in Delaware, Sullivan and Broome … 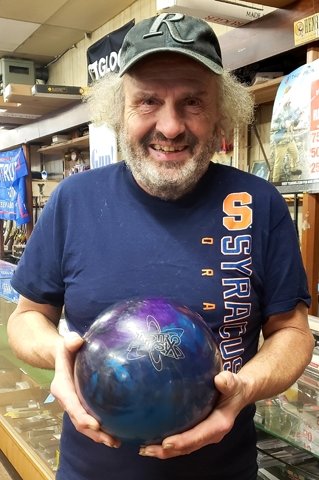 Sixty-eight-year-old Hancock bowler Donald John Marino has been a crafty left-handed superstar for many years and made his mark bowling over the years in Delaware, Sullivan and Broome Counties.

Presently Donnie just bowls in two leagues at the Fox Bowling Center in Hancock, his home bowling center since he first took up the game at the age of six.

The two leagues he presently bowls in include the Wednesday Independent league and the Sunday Mixed Fun league.

His present league averages are 196 and 203 but for many years when his bowling skills were at his best Donnie continuously knocked out a 235 plus average at the Sunset Bowling Center and the Midway in Binghamton, Susquehanna, Callicoon Lanes and his home Fox Bowling Center Lanes.

Those left-handed bowling skills over the years have produced 13 perfect 300 games and eight 800 plus series.

Marino won the singles championship while bowling in Binghamton and noted that bowling and competition was a lot of fun as, “I had the opportunity to meet and bowl against many great bowlers.”

He did bowl in one PBA regional tournament and pointed out that he has bowled a 300 game in four different bowling centers.

Donnie is semi-retired and only works two days a week in the family owned Marino Firearms Store in Hancock.

When asked about bowling with masks he said, “It was tough to start with masks but I'm use to it now."

The Professional Bowlers Association announced the PBA Tour will begin its 2021 season with the $1 Million PBA Players Championship tournament starting the weekend of Jan. 15.

The Major event will kick off the long-awaited return of PBA Tour competition with a revolutionary new format and a record-setting $250K first place prize on the line.

For the first-time, the PBA is offering all its members the opportunity to compete for a Major Title by hosting five regional qualifying events that will take place simultaneously at different Bowlero locations around the country - Bowlero Christown in Phoenix, Ariz., AMF Garland Lanes in Garland, Texas, Bowlero Wauwatosa in Milwaukee, WI., Bowlero West End in Richmond, Va., and AMF University Lanes in Tampa, Fla.

The top five players from each qualifying event will then advance to a series of five televised regional finals, all taking place at Bowlero Jupiter in Jupiter, Fla. beginning on Sunday Jan. 24 through February 14 on Fox Sports' FS1. The culminating sixth telecast will feature the five regional winners competing in the Championship Finals live on FOX Broadcast Channel, Sunday, Feb. 21 at 12:30 EST.

Another highlight to the reinvented Players Championship - the $1 Million total prize fund with BIG prizes on the line for first to fifth place finishers - $250K, $130K, $80K, $60K, and $50K, given out respectively. “We are thrilled to announce the return of the PBA Tour, launching our 2021 season with the re-imagined PBA Players Championship,” said Colie Edison, CEO of the PBA. “The new format gives our entire membership base an opportunity to safely participate, while competing with the Tour's elite bowlers for a Major Title and life-changing prize money.” With a new identity, the PBA Players Championship format will allow players to compete closer to home in regional qualifying locations to mitigate risks brought on by travel during the Covid-19 pandemic. Qualifying locations have been predetermined for players based on their current residence.

Stay tuned for the full 2021 PBA Tour season schedule of events, including tournament formats, host bowling centers, and more - to be announced at a later date.

Fans can catch all the action of the PBA Players Championship on FOX and Fox Sports' FS1, and live stream the PBA on the FOX Sports and FOX NOW apps or at FOXSports.com. Select highlights will be available on @FOXSports social handles across Twitter, Facebook, Instagram, and YouTube. International fans can watch live on FloBowling.com.

The wonderful world of bowling gives bowlers the opportunity to use performance bowling balls.

These balls are made of urethane, urethane with reactive additives, with or without particles.

All performance balls come out of the box with either some degree of matte finish, a compounded finish or polished finish.

When a manufacturer chooses a box finish for a bowling ball, many times it is for shelf appeal. All companies want you to choose their products. What you need to know as a customer is that the cover of your performance ball can be adjusted to best fit your needs.

What does this mean for a customer? To maximize your scoring ability on a given lane condition, the cover stock of your bowling ball should match the lane condition. If your ball is grabbing too early, you will need some polish, if the ball is already polished, use a higher degree of polish, preferable something with a slip agent. This will help you get the ball down the lane with less effort.

The telltale sign of a ball grabbing the lane too soon is when you see the ball start to hook and then it stops hooking. On the other hand, if your ball is skidding too far down the lane, you will need some surface friction on the ball. How much friction you need will depend on your ball speed, rev rate and the amount of oil on the lane. The degree of matte finish could be as little as 4000 or as much as 320.

Reminder....these are adjustments to fine tune your ball reaction. It is up to your Pro Shop professional to help you purchase the ball or balls with the proper core and cover to match both your game and the lane surface on which you bowl. Depending on how serious you are about your bowling, and how many centers you bowl in, you may need more than one ball to help you match the conditions.

And always remember, your equipment should be cleaned each time it is used.