Most Outstanding Athletes of Spring 2022 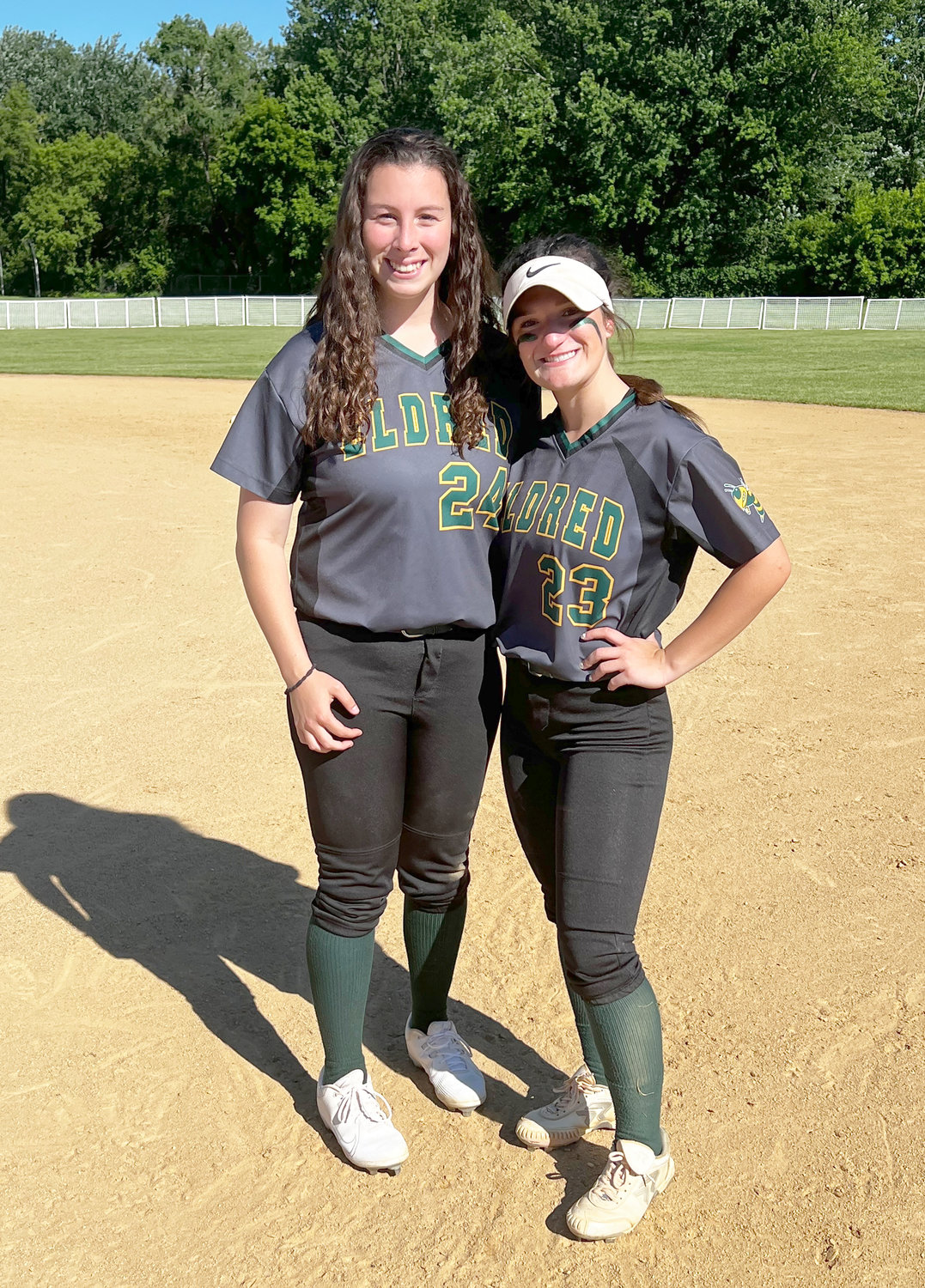 Eldred’s inimitable duo, Lily Gonzalez, left and Dana Donnelly still have those captivating smiles and their unshakeable love of the game even after their regional defeat to Deposit/Hancock. Their softball life continues this summer with Pro Prospects U18 Phantoms, yet another winning enterprise strongly benefiting from these two winning players.
Richard A. Ross | Democrat
https://alpha.creativecirclecdn.com/scdemocrat/original/20220623-133359-IMG_2841%281%29.jpg 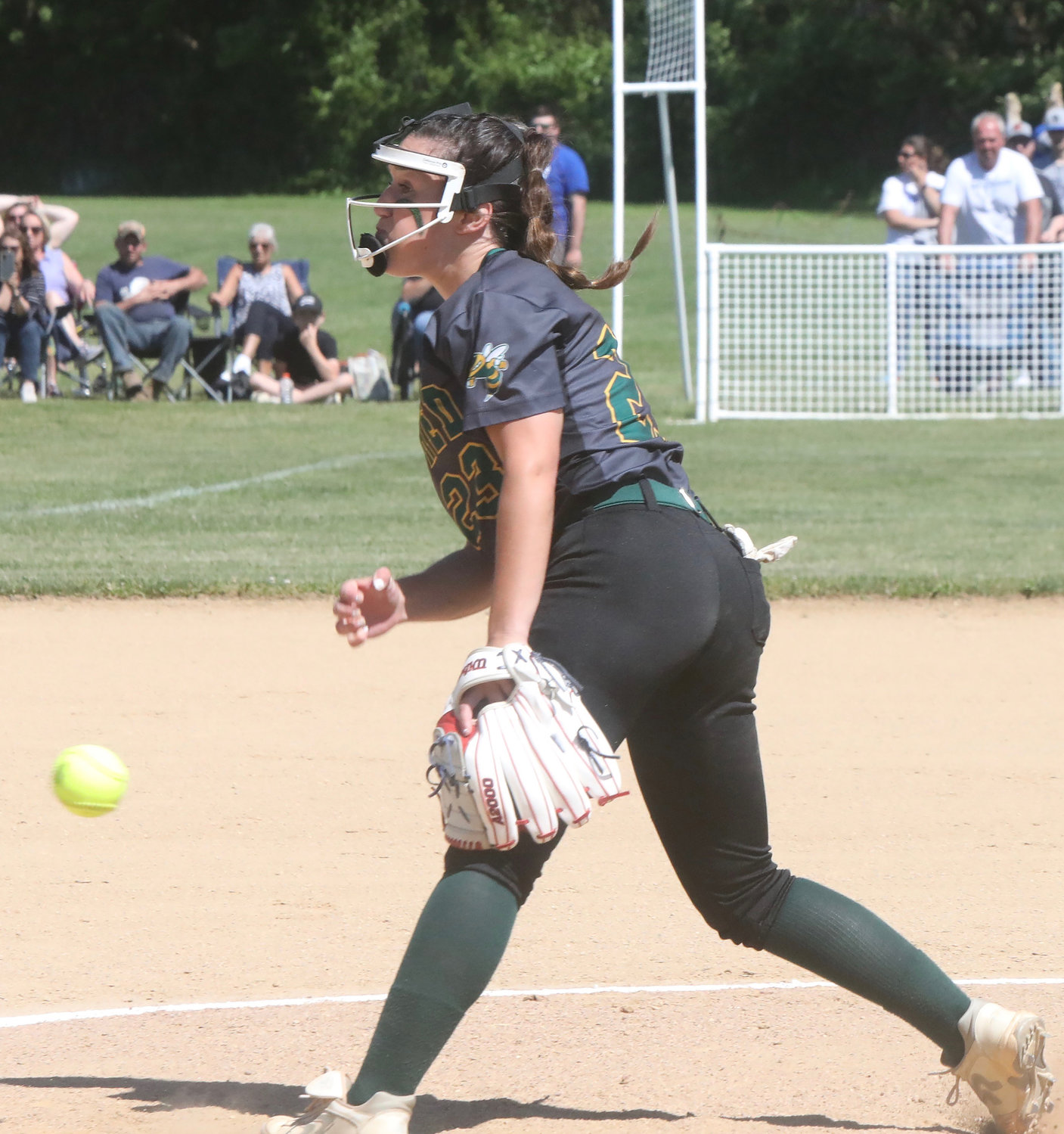 Hit it if you can. Eldred’s Dana Donnelly fires a blazing fastball against Deposit/Hancock in this year’s regional clash. Donnelly’s arsenal also contains a drop curve, a baffling change up and a two-seamer.
Richard A. Ross | Democrat
https://alpha.creativecirclecdn.com/scdemocrat/original/20220623-133413-IMG_2876.jpg 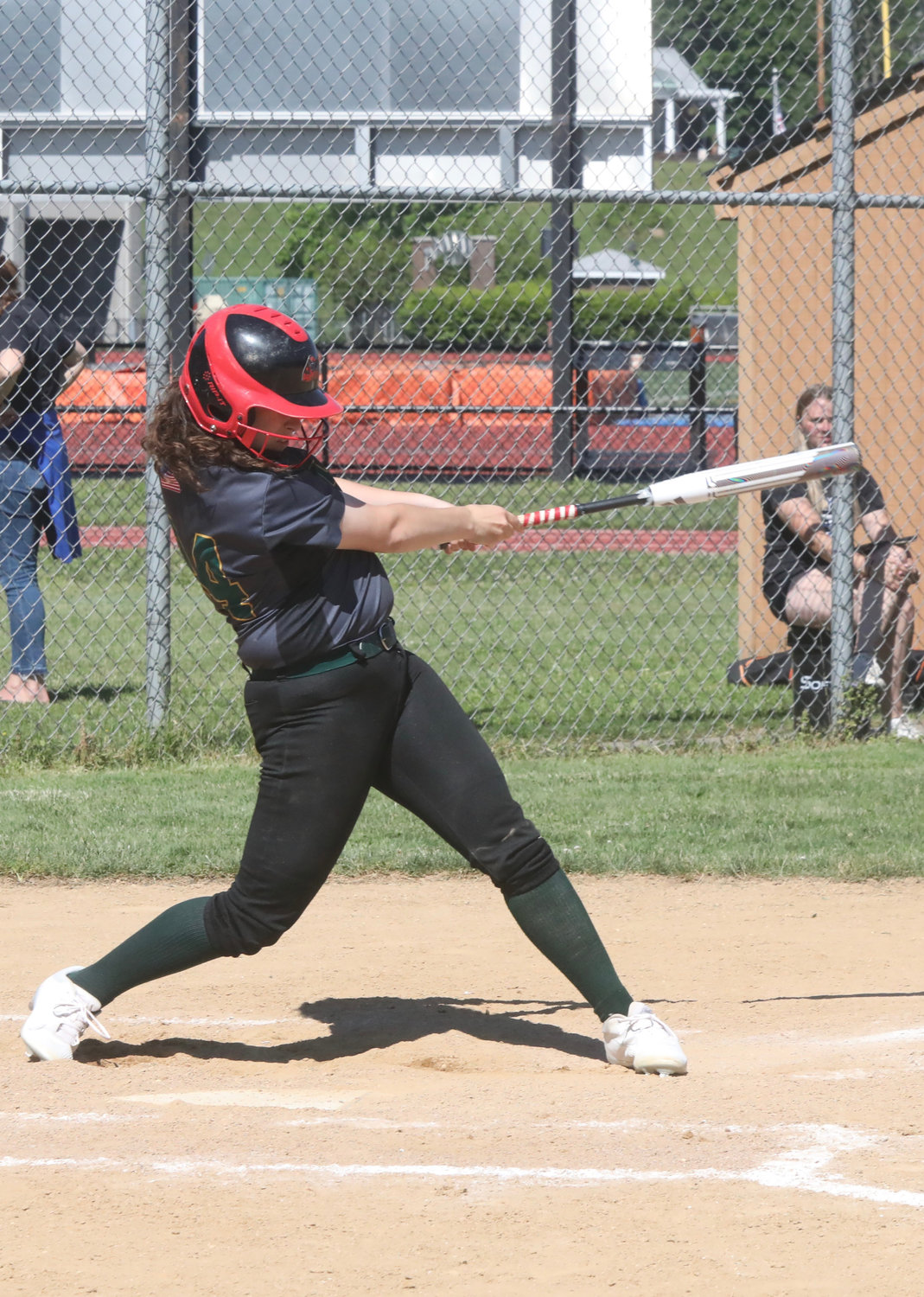 Ferocious force. Eldred’s Lily Gonzalez is a lethal weapon in the batter’s box as well as an invaluable asset behind the plate. She and Donnelly have played together since their elementary days. They are the best of friends and a coach’s dream, models of great sportsmanship, unmatched intensity and a true love of the game.
Richard A. Ross | Democrat
Previous Next
Posted Friday, June 24, 2022 6:20 am
Richard A. Ross

That lone adjective describes the combined dual force of Eldred ace hurler Dana Donnelly and catcher Lily Gonzalez. The senior dynamic duo closed out their high school careers by propelling the Eldred Lady Yellowjackets to their seventh consecutive Section IX Class D softball title. The best of friends and teammates going way back to their elementary school days, their conjoined softball life did not end with their school’s regional loss to Deposit/Hancock. Rather, it continues to shine on brightly as they bring their unflagging efforts and merged spirit to the Pro Prospects U-18 juggernaut Phantoms, their longstanding travel team.

This summer, they are relishing their final joint playing days before going their separate ways as they take their gifted crafts and experiences on to the college level. Donnelly will pitch and play second base for Mount St. Mary, while Gonzalez will shine at Delhi as the outstanding catcher that she has become. Needless to say, both will also bring their lively bats to bear as another part of their winning pedigree.

To choose one without the other as this spring’s Sullivan County Democrat Most Outstanding Female Athlete would have been unthinkable. One could not divide these two; a fact understood by their high school softball coaches Rick Whitney and Mike Donnelly, as well as their former high school coach Ryan Jasper and of course, their travel team mentor, Steve Pinto of Pro Prospects.

These young women have come through so much together. So much so, that they literally finish each other’s sentences. They are, as they have been affectionately referred to, “like an old married couple,” having spent so much of their lifetime together. They whimsically refer to each as “soulmates.” It is an apt term for it seems as if they were destined to be an integral part of each other’s lives. Both were blessed with fathers who were instrumental in their development. Both come from loving and supportive families that have stalwartly been there for them throughout the joys and tears that inevitably come with living and playing with such intensity. Their stories are somewhat different, and yet, uncannily similar.

Batters dread facing her. With a blazing fastball, an uncanny drop curve, a baffling change up and a two-seamer in her arsenal, Dana Donnelly has been the epicenter of Eldred’s softball success ever since she took over the varsity mound authorship back in ninth grade. But her roots in the game long predate that freshman year emergence. Beginning in Little League at age four, she began her pitching sojourn back in fourth grade.

Her dad Mike was the coach and she immediately fell in love with the enterprise. Neither dad, nor daughter knew much about pitching so they began watching YouTube videos and relentlessly, voraciously reading and researching everything they could get their hands on.

“He’d work with me when he came home from work and he took me to Pro Prospects in sixth grade where I met my mentor Steve Pinto.”

Travel teams soon became a way of life. At summer’s end, that amazing sojourn will finally cease. Donnelly has also played soccer and basketball at Eldred. “I love soccer so much. I’m good at it, just not as serious as I am about softball. I got to play forward and score a lot of goals.”

The running is good conditioning for softball, but she is quick to note that pitching is far more taxing than running. Basketball is something to play in winter, let’s just say she just tolerates it and leave it at that. Travel ball has been responsible for so much of her progress. It’s a full-year venture with games in the fall and spring and winter workouts in between. Having different coaches in high school and travel team can be challenging, but her mentors have respected and understood the other’s agendas, thus letting her progress without undercutting what the other was emphasizing.

Asked what she reveres most about the sport, Dana quickly responds, “I love everything, mostly the competition. It’s very much a mental enterprise. You never know what’s going to happen,” she notes.

That said, one thing that never changes is her mindset and her unflagging confidence, especially with Lily behind the plate calling her pitches, which Dana will sometimes wave off. How well does it work? Dana surpassed 100 strikeouts in the weather-related shortened Eldred season of just 15 games including the regional clash.

Lest one think of her only as a star hurler, Dana wields a lethal bat as well. She approaches hitting with the same vigor and determination. Softball at Mount St. Mary figures to be an exciting venture as the team is already experiencing great success. Dana will be a great asset in her capacity as a pitcher, fielder and batter. Both Dana and Lily have great instincts for what will work best with each batter. In the teams that they faced in their high school journey, many batters were familiar foes. In travel team games that is not the case, nor is the level of talent they regularly encounter. It doesn’t seem to matter though, as the Phantoms’ continuing success has demonstrated.

Donnelly is blessed with such strong family support, not only from her dad who has been Whitney’s assistant coach, but from her older brother Mikey, her older sister Kaley and her ever-present mom Lisa. The Eldred community is strongly behind her, Lily and the rest of the Lady Yellowjackets. The familiar adage is aptly appropriate. “It takes a village…”

As menacing as Dana is on the mound, Lily is equally frightening in the batter’s box. Fearsome hitting is an integral part of Gonzalez’s signature brand of softball. The other unique facet in her toolbox is her uncanny catching ability that features insightful pitch calling, but also snaring pitches that can veer or rise unexpectedly. Literally nothing gets by her. She also possesses a rocket arm and loves to throw runners out attempting to steal a base.

In high school softball, so many runners advance on passed balls. They think twice about it with Lily ready to erase them from the base paths. With a gifted eye in the batter’s box, Lily patiently waits out the pitches. Her swing is smooth and powerful. Line drives go piercing through the infield, long fly balls send outfielders scurrying and on two occasions this season, home runs sailed over the fences. One in Livingston Manor rolled down a bank and into the river. Gonzalez is the cleanup hitter in a very efficient lineup. She often comes to the plate with runners aboard and RBIs follow suit with regularity.

Like Dana with her dad Mike, Lily credits her dad Chris with so much of her success. His sudden passing this past winter was a devastating blow to her, her mom Kelly and her sisters Olivia, Riley and Emma. It was Chris who had helped her so much to become a better hitter. Lily’s love affair with the game goes way back. She was originally a shortstop during fourth and fifth grade when her dad and Mike Donnelly were the coaches. By then, Dana had already begun to pitch and the other catcher often dropped her pitches. That was when Lily got the call to work behind the plate. She’s a natural.

Asked what she loves about it, she smiles and replies, “it’s just fun. I’ve got the best view of the field,” she avers. She loves throwing out runners.

Pro Prospects coach Steve Pinto is always giving her tips on hitting. Yes, there have been those occasional hitting slumps at times, as all batters are apt to encounter, but for Lily they are short-lived. “When I step into that batter’s box, everything else goes away.” Affable, friendly and smiling, one might be surprised by Lily’s ferocious spirit when it comes to softball.

Both she and Dana are winners in every sense of the word. Lily used to hate soccer, but this past fall she got to play in the goal and liked it. Her quick reflexes proved to be an asset. Basketball is her second favorite behind softball. Again, her dad taught her everything in that venture too. Both she and Dana model terrific sportsmanship, great commitment, leadership and superb teamwork. There were many outstanding female athletes in Sullivan County this spring, but these two young women were the most impactful.

Their legacy at Eldred became an indelible part of the school’s fine sports history. Needless to say, opponents will breathe a great sigh of relief upon seeing them finally graduate, but the duo has left their imprint on their young teammates who will close ranks and carry on what this pair of icons taught them.

Most importantly, they modeled that no-quit attitude and, above all, the love of the game.