MONTICELLO — Long lines stretching out the door, as well as equipment shortages and malfunctions were some of the concerns raised by members of the public since Election Day. Issues … 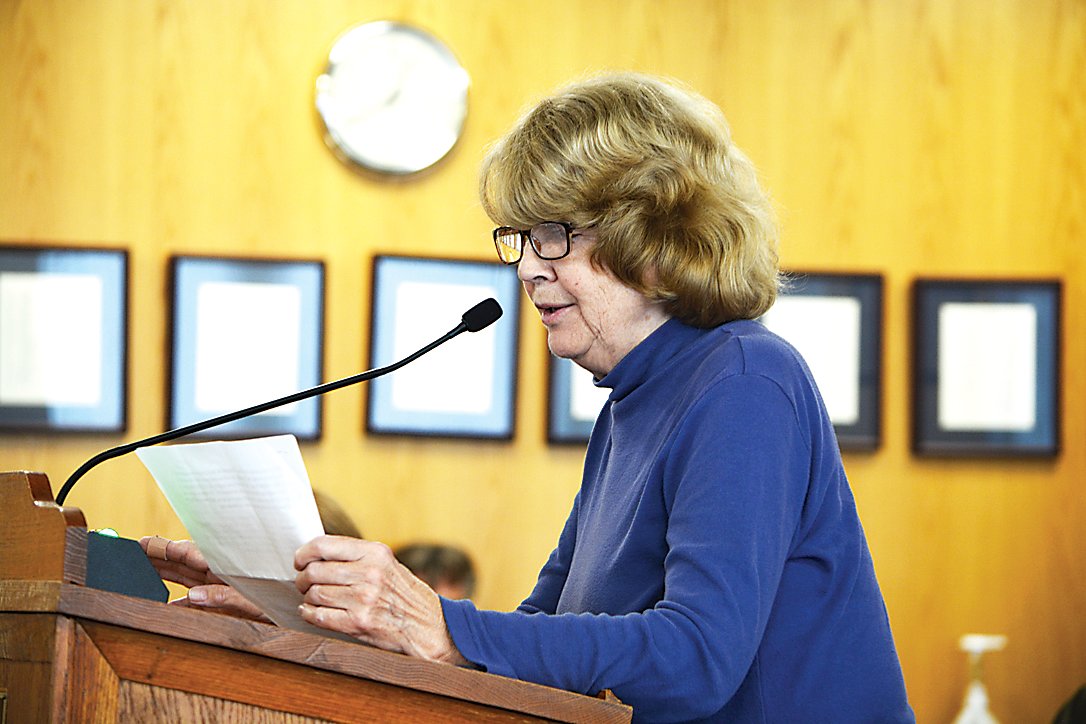 Mamakating resident Mary Allison Farley, who was a poll worker at Mamakating Town Hall on Election Day, spoke to the Legislature regarding issues they faced on November 8.
Joseph Abraham | Democrat
Posted Tuesday, November 22, 2022 6:10 am
By Joseph Abraham

MONTICELLO — Long lines stretching out the door, as well as equipment shortages and malfunctions were some of the concerns raised by members of the public since Election Day. Issues they’d like to see remedied before the next time voters head to the polls.

“The County’s voting system was not working last Tuesday in Mamakating,” Mary Allison Farley, a Mamakating resident who worked the polls, told legislators at Thursday’s full board meeting, noting there was a long line of voters outside Mamakating Town Hall when she arrived for her shift at 11:30 a.m.

“Within about an hour, one printer of the two used by the poll workers was down,” she said. “Shortly thereafter, the other printer went down.”

Farley said Board of Elections staff came several times to that polling place and that she appreciated their efforts, as well as the professionalism of poll workers.

“I know friends of mine, [my] family know people who wanted to vote who didn’t,” she added. “They drove by twice [at] different times, [thinking] maybe the line will be better. I’m not here to point fingers, I’m here to say, let’s fix this problem and get back to delivering election services in the great way that the County has always done.”

Farley asked that the Sullivan County Board of Elections (BOE) produce an analysis of what went wrong and then tell the public how they were going to fix it so it doesn’t happen again.

Jeffersonville resident Barbara VanBenschoten, who was a poll inspector in Youngsville on Election Day, told legislators that the Board of Elections needs their budgetary support, and said they too had issues with equipment.

She highlighted three areas she hoped the Legislature would address, which included the BOE having more people in the field handling technical issues, backup systems in place if equipment malfunctions, as well as having enough supplies so they don’t have to call for more toner and paper, and finally, reviewing how many check-in stations there are for each polling location, citing the difficulty of having one station for two districts in Youngsville.

Bose thanked those who worked the polls for making the experience the best it could be given the circumstances, and added that he had spoken with other supervisors who agreed the issues on Election Day needed to be corrected.

The Democrat reached out to the Sullivan County Board of Elections regarding the public’s concerns, but did not hear back by presstime.

“I think we should just go back to printed ballots,” said Sorensen, “and if there are any left over, they can be recycled. I also think from an environmental standpoint, operating thousands of printers and replacing thousands of ink cartridges is far more detrimental to the environment than sending them to a printer.”

District 2 Legislator Nadia Rajsz, whose daughter Deanna Senyk is one of the County’s two BOE Commissioners, added that if anyone is interested in working the polls, to please step forward.

“One of the biggest issues was not having enough resources in personnel,” said Rajsz. “You can have a lot of these [iPads and printers] but if you don’t have people operating them, it’s not going to do you any good. We can criticize all we want, but unless people step up, start helping and working, that’s where the fix is going to be.”

District 4 Legislator Nicholas Salomone noted that the Legislature has had conversations with the BOE, and one idea discussed was possibly canvassing County employees to see if they’d be interested in working the polls.

Later on Rajsz also concurred with comments made that the County has to invest in more resources for the BOE. She also pointed out that there was “ample opportunity” for people to vote, including the nine days they could do so early.

As the Democrat previously reported, between October 29 and November 6, over 3,000 County residents voted early at the Government Center in Monticello.

Minority Leader Ira Steingart added that while the current legislature is at odds on certain issues, this wasn’t one of them.

“All nine of us want to make sure everyone that wants to vote gets a chance,” said Steingart. “The Board of Elections work very hard, with early voting, the hours they put in to get [poll workers] to be there, it’s not easy. We are looking into it and trying to make sure it doesn’t happen again. But it’s not for a lack of effort or anybody trying to take away someone’s vote.”