LAKE HUNTINGTON - “Nature’s first green is gold, her hardest hue to hold.” Robert Frost had it right in his poem, “Nothing Gold Can Stay.” The restorative life of spring … 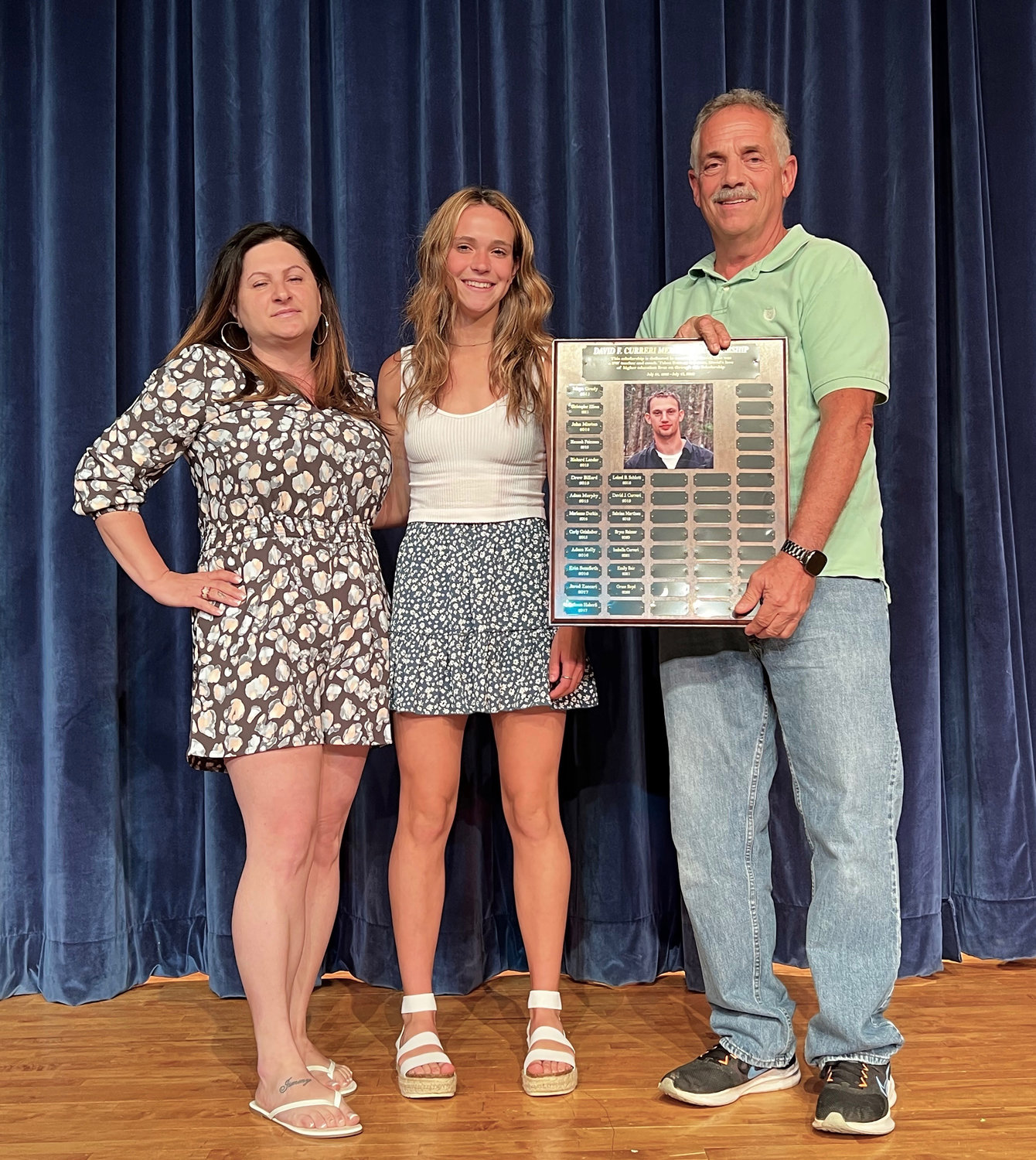 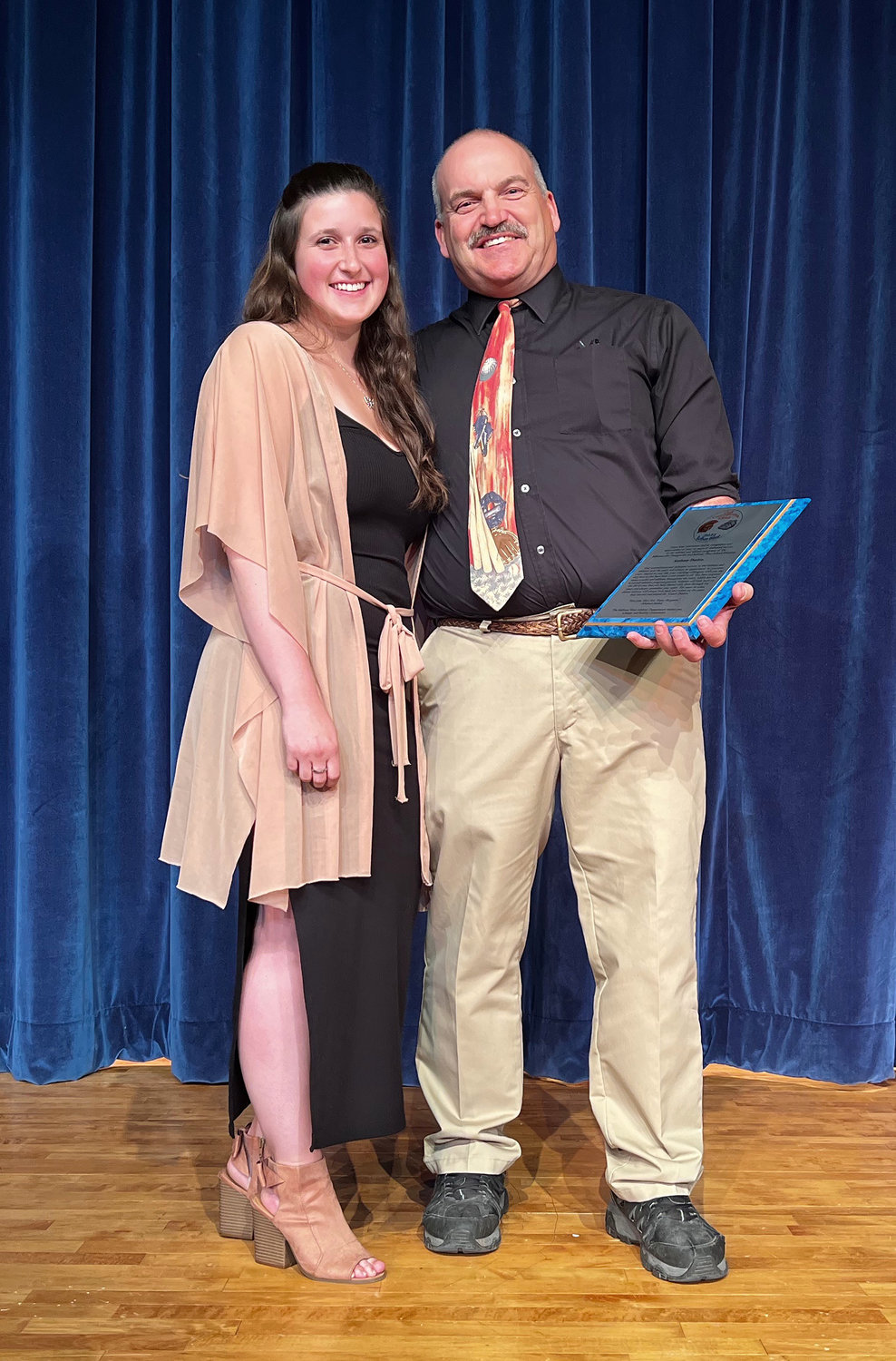 Retiring coach Anthony Durkin was the honorary recipient of a plaque attesting to his decades of great coaching and service to the school and community. It was presented to him by his daughter Elaine.
Richard A. Ross | Democrat
https://alpha.creativecirclecdn.com/scdemocrat/original/20220616-141225-IMG_3406.jpg 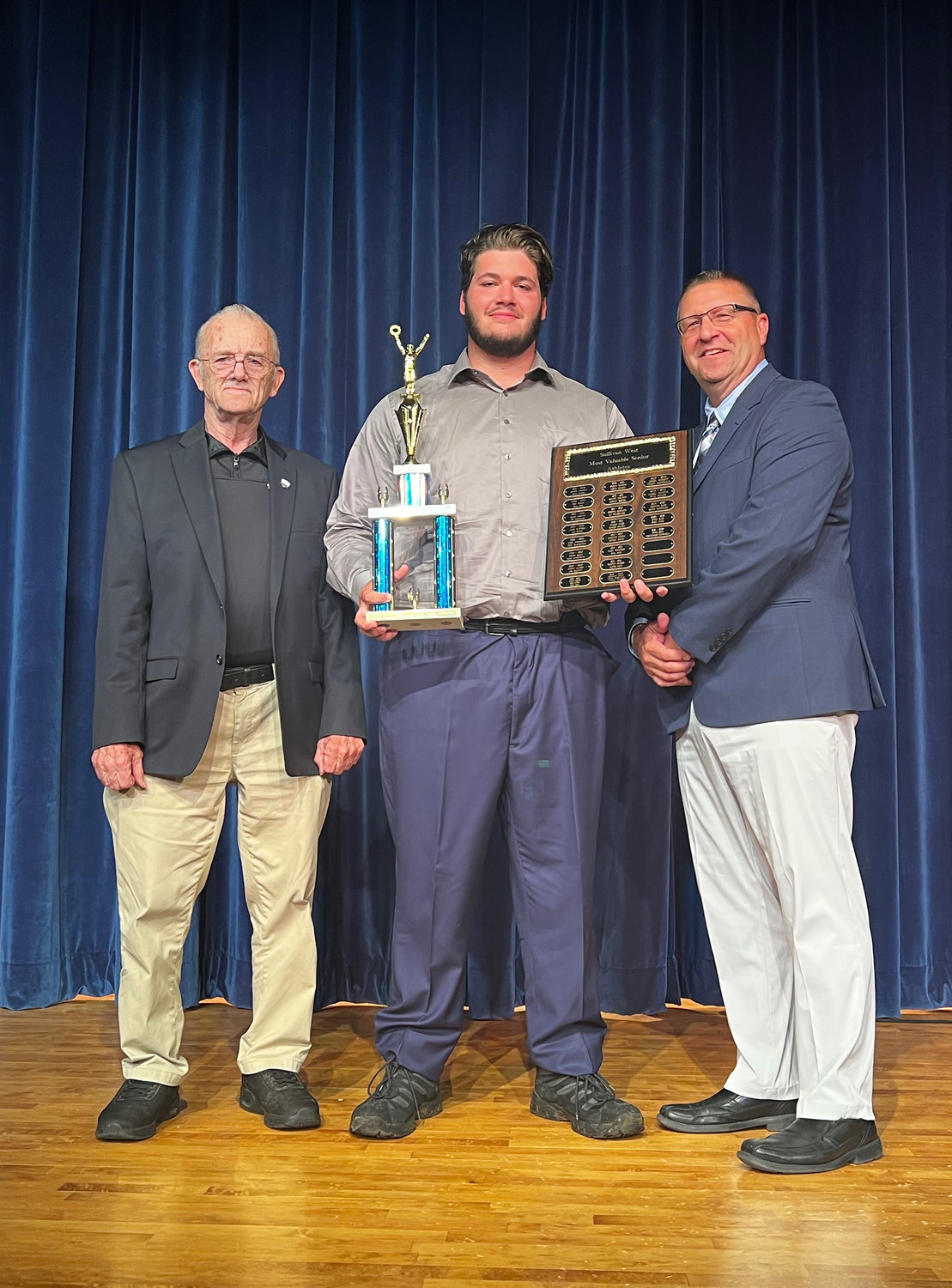 Chris Campanelli was named the spring male MVP. He is flanked by Coaches Ron Bauer and John Meyer.
Richard A. Ross | Democrat
https://alpha.creativecirclecdn.com/scdemocrat/original/20220616-141153-IMG_3400.jpg 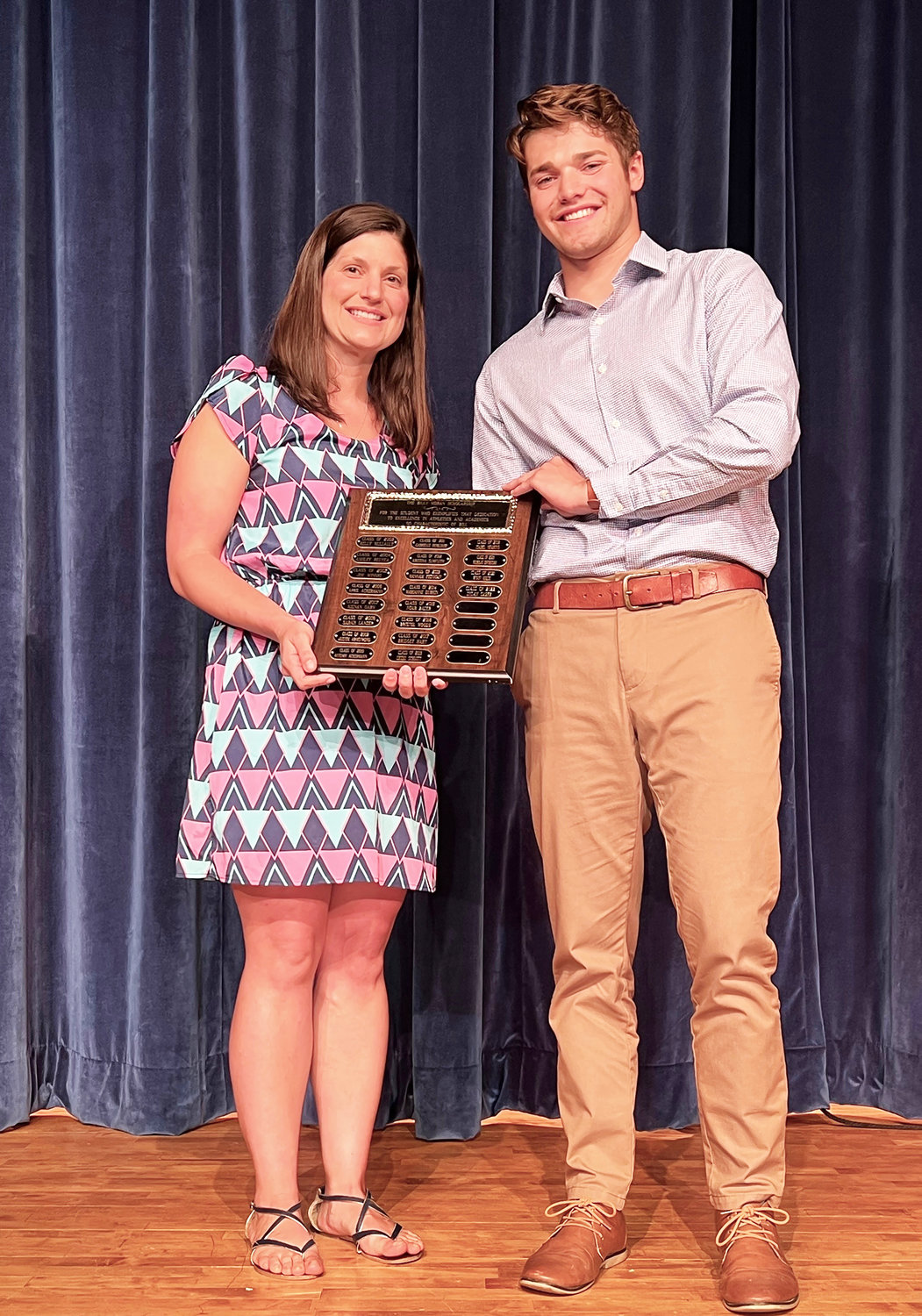 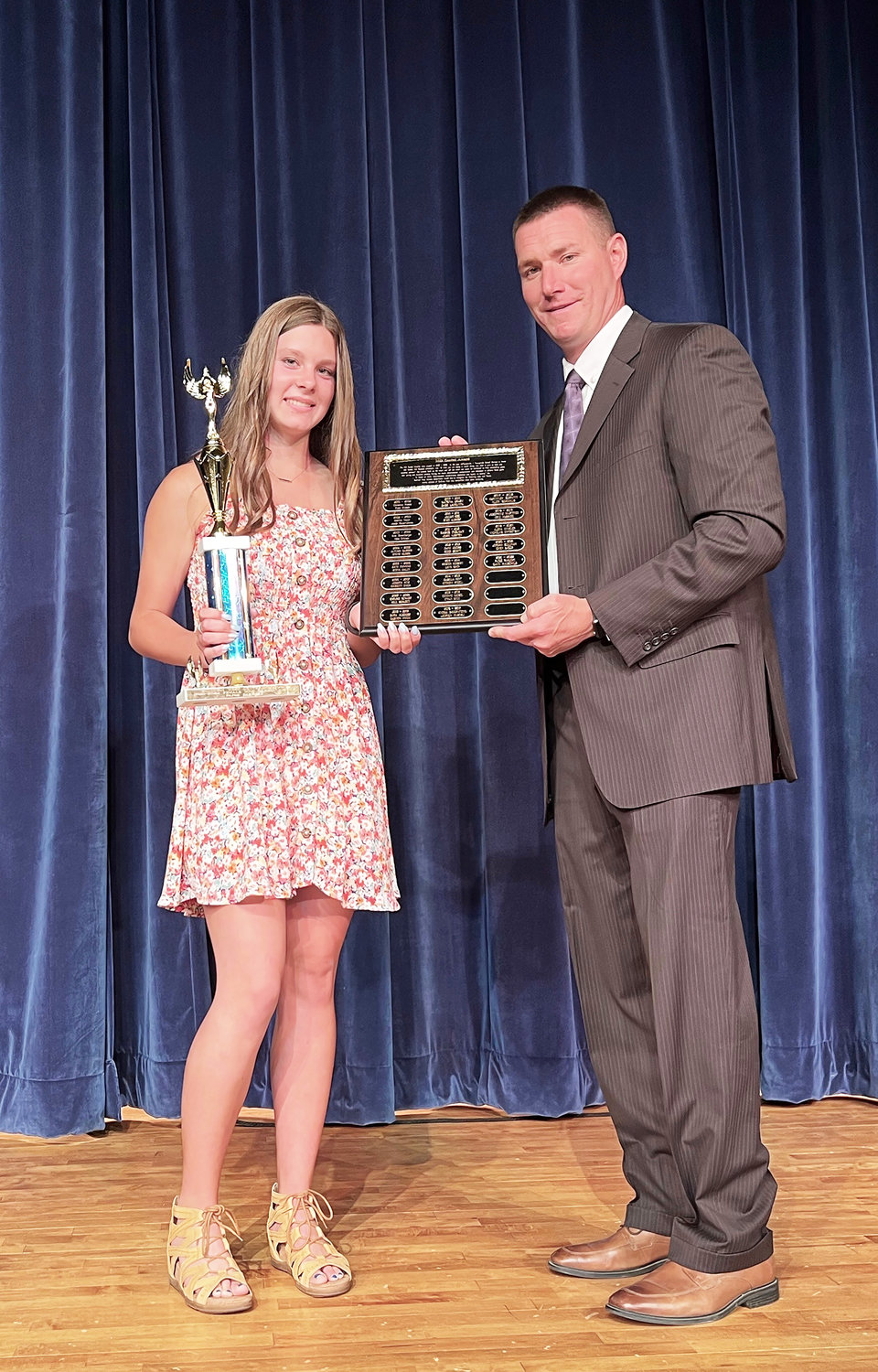 Paige Parucki was the recipient of the Female Milt Gaebel Award.
Richard A. Ross | Democrat
https://alpha.creativecirclecdn.com/scdemocrat/original/20220616-141109-IMG_3385.jpg 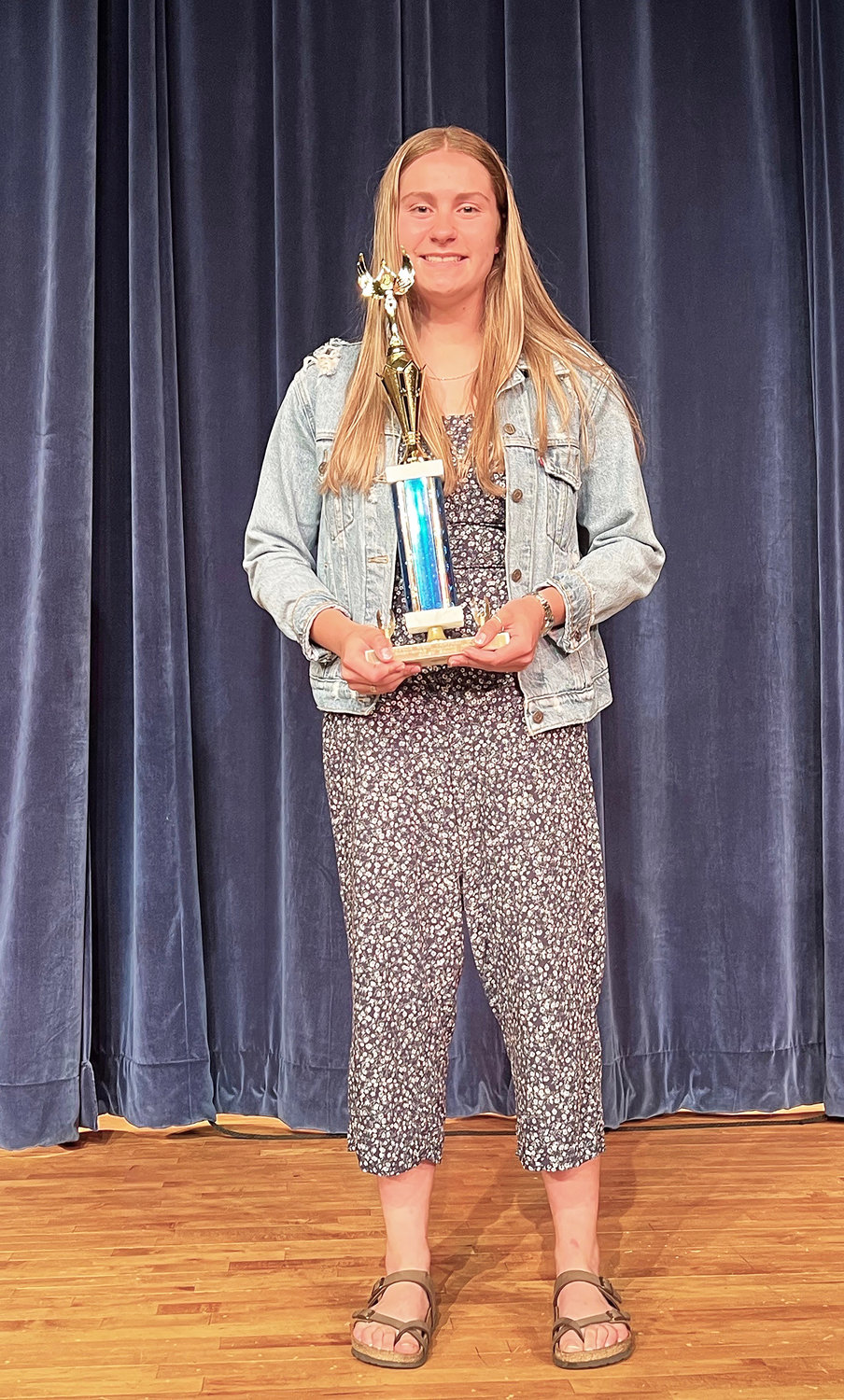 Riley Ernst was named the recipient of the Female Coaches Award.
Richard A. Ross | Democrat
https://alpha.creativecirclecdn.com/scdemocrat/original/20220616-141123-IMG_3390.jpg 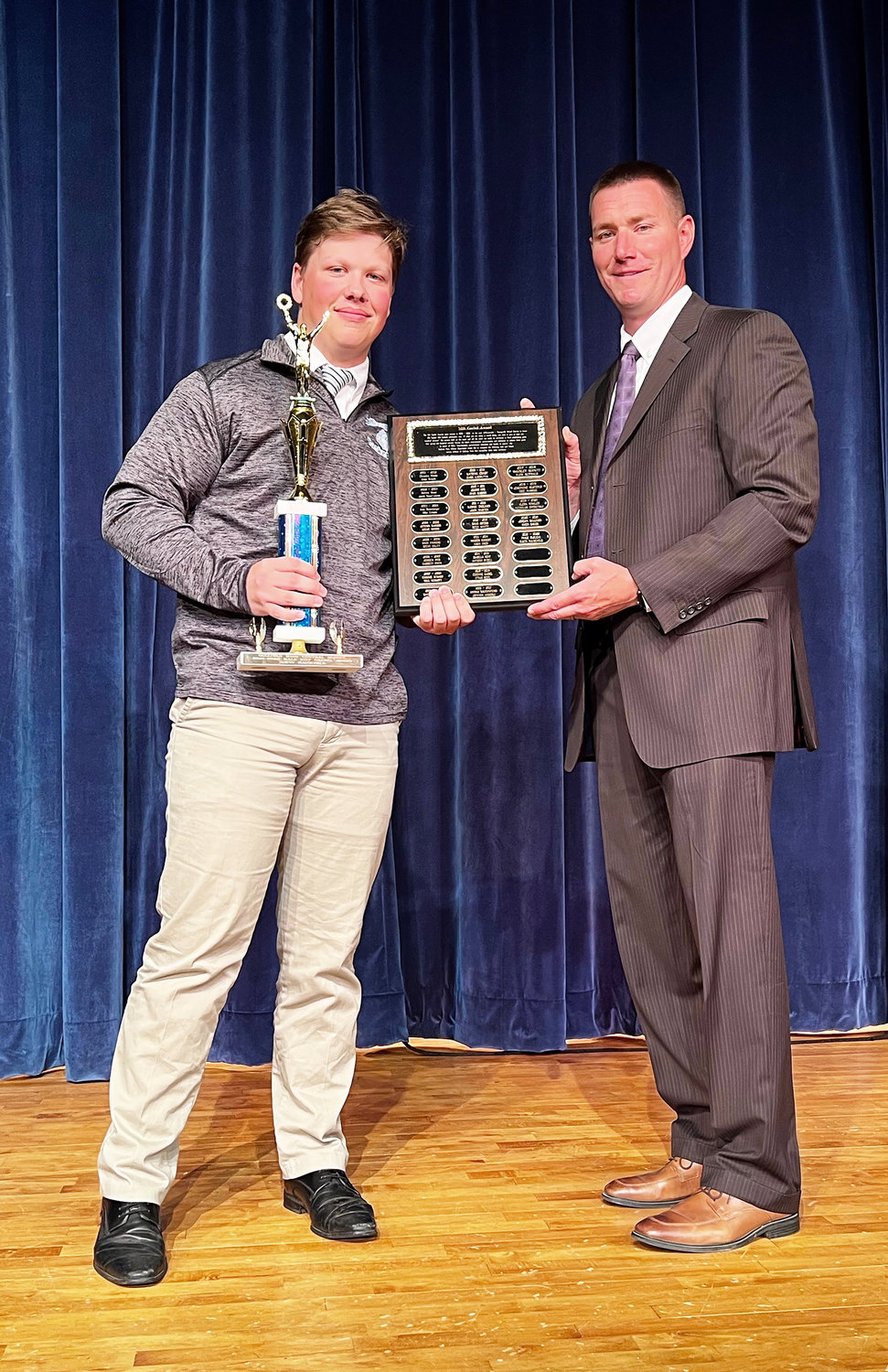 Gavin Hauschild was the Male Milt Gaebel Award winner. He is pictured with Athletic Director David Eggleton.
Richard A. Ross | Democrat
Previous Next
Posted Friday, June 17, 2022 6:20 am
Richard A. Ross

LAKE HUNTINGTON - “Nature’s first green is gold, her hardest hue to hold.” Robert Frost had it right in his poem, “Nothing Gold Can Stay.” The restorative life of spring is like no other and, true to Frost’s poem, it passes by all too quickly.

For the Sullivan West spring teams, the athletes and their coaches, spring began slowly with winter stubbornly refusing to relent its strangle hold. But once the weather turned warmer, that “golden green” began to appear. Finally, spring did indeed emerge, and what a spring it was. With a girls Section Nine championship in track and field and a powerful runner up effort by the boys track team, personal bests were achieved and records broken including three by MVP, Curreri Scholarship winner and track MVP, Grace Boyd who now holds school records in the 1500, 3000 and the 2000 steeplechase. Kathryn Widmann set new Sullivan West high-water marks in the discus and shot put and Coach Skylar Musa’s legion of many young and aspiring competitors answered the bell.

For the boys team, led by mega-thrower Chris Campanelli, who set a new school record in the shot put at states, it was also a banner season. Both Campanelli and Boyd qualified for states and put a coda on their outstanding careers on the biggest of stages, the NYSPHSAA/Federation Track and Field Championships. Both will move on to sports careers at the next level with Boyd continuing her track career at Division 1 University of Buffalo, while Campanelli pursues football at D1 Junior College Lackawanna.

The girls golf team went undefeated, led nobly by state contender Gabby Cohen. The role players on all the spring teams are too numerous to mention here, but the awards given out brought some of them into the limelight.

Athletic Director David Eggleton began by lauding the school’s OCIAA Scholar Athletes Dylan Sager and Taylor Brustman who came to the stage and posed with their plaque. High school principal Mark Plescia told the seniors to take their excellence and experience to the next level in whatever they pursue. To the underclassmen, he offered, “Now it’s your time to lead.” The 27 senior spring athletes came to the stage to lead the audience in the singing of the National Anthem. Coaches then came forward to call their teams to the stage, laud their achievements and give out their awards. Boys track and field coach Steve Rogers named Charles Kutschera the Rookie of the year. He then gave the Coaches Track Award to veteran distance runner Karl Swanson and the Coaches Field Award to Chris Campanelli. Campanelli credits Rogers with the inspiring mentorship that helped him go from throwing the shot put 39 feet, to a state Federation third place, school-record breaking 53-4. Girls track and field Coach Skylar Musa did an outstanding job of guiding her team to a Section Nine championship. Musa gave Rookie of the Year award to Brooke Nunnari. The Coaches track award went to Samantha Everett for her superb work ethic. The Track MVP award went to Grace Boyd for her epic performances and three new school records. JV baseball coach Justin Diehl lauded his 9-3 team while Varsity baseball coach Bill Kirk highlighted the play of Max Ebert with the Coaches Award and that of Jacob Hubert, the team’s Most Valuable Player.

Retiring softball coach Anthony Durkin received a special tribute from Eggleton and his daughter Elaine who spoke on behalf of the family. Durkin received a plaque commemorating his decades of service in coaching and the impact he has had on so many young men and women over the years.

The evening which began with a slide show of spring athletes in action and concluded with smiles, tears, and a bevy of photos as the ceremony concluded, was the swan song for the many senior fine athletes who had devoted years to their sports and brought great pride to their families, friends, school and community.