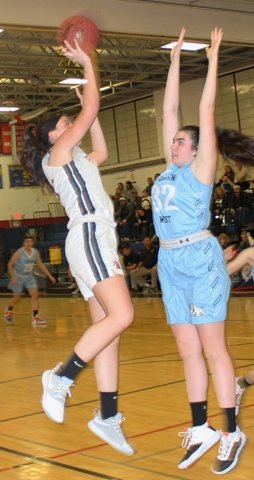 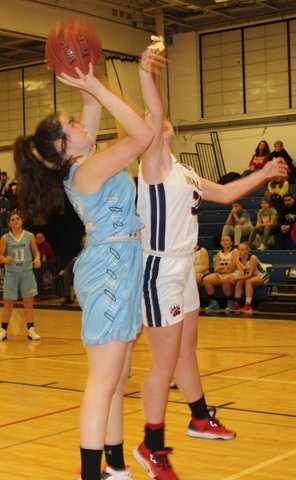 Sullivan West Coach Pat Donovan pointed out prior to the start of the game that his starting squad consisted of four sophomores.

Experience with juniors and seniors starting quickly made an appearance in the first eight minutes of play as Tri-Valley waltzed to a first quarter lead of 19-8.

Leading the scoring for the Bears in the first quarter was Victoria Swett with seven points off a trey and two deuces. Madison Botsford and Heather Winters added three pointers.

The Bulldogs climbed back into the game during the second quarter outscoring Tri-Valley 15-10 off the three point scoring attack of Grace Boyd who swished the nets for three treys which sliced the Bears halftime lead to 29-23.

Tri-Valley's junior guard Madison Botsford opened the third quarter with a three pointer and the Bears were off and running again, outscoring Sullivan West 15-7 and taking a 14-point 44-30 lead into the final eight minutes of play.

Both teams traded baskets pretty evenly in the fourth quarter with the Bulldogs outscoring the Bears 15-13 giving Tri-Valley the victory by 12 points, 57-45.

Turnovers did not seem to play a major role in this game as Tri-Valley committed 16 to Sullivan West's 17.

Sullivan West coach Pat Donovan in post game remarks said, “We would battle back and then just give it away.”

“Rebounding was a big factor in our loss,” Donovan added.

Winning coach Gary Ter Bush said of the win, “I was pleased with the first and third quarters.”

He added, “Our bench just didn't play well, they came in, and they were playing tentative and I used the starters more than I wanted to.”

“If we win Friday night at Sullivan West, the sectionals are guaranteed,” Ter Bush said.

The Lady Bears lost to Burke in a non-league game on Tuesday night to the tune of 49-35. Swett and Musa scored eight points each for T-V.