FALLSBURG – The Comets hosted the Blue Devils on Wednesday night for the first game of the season. The stage was set by an electric JV game, with the Blue Devils overcoming an 11-point deficit … 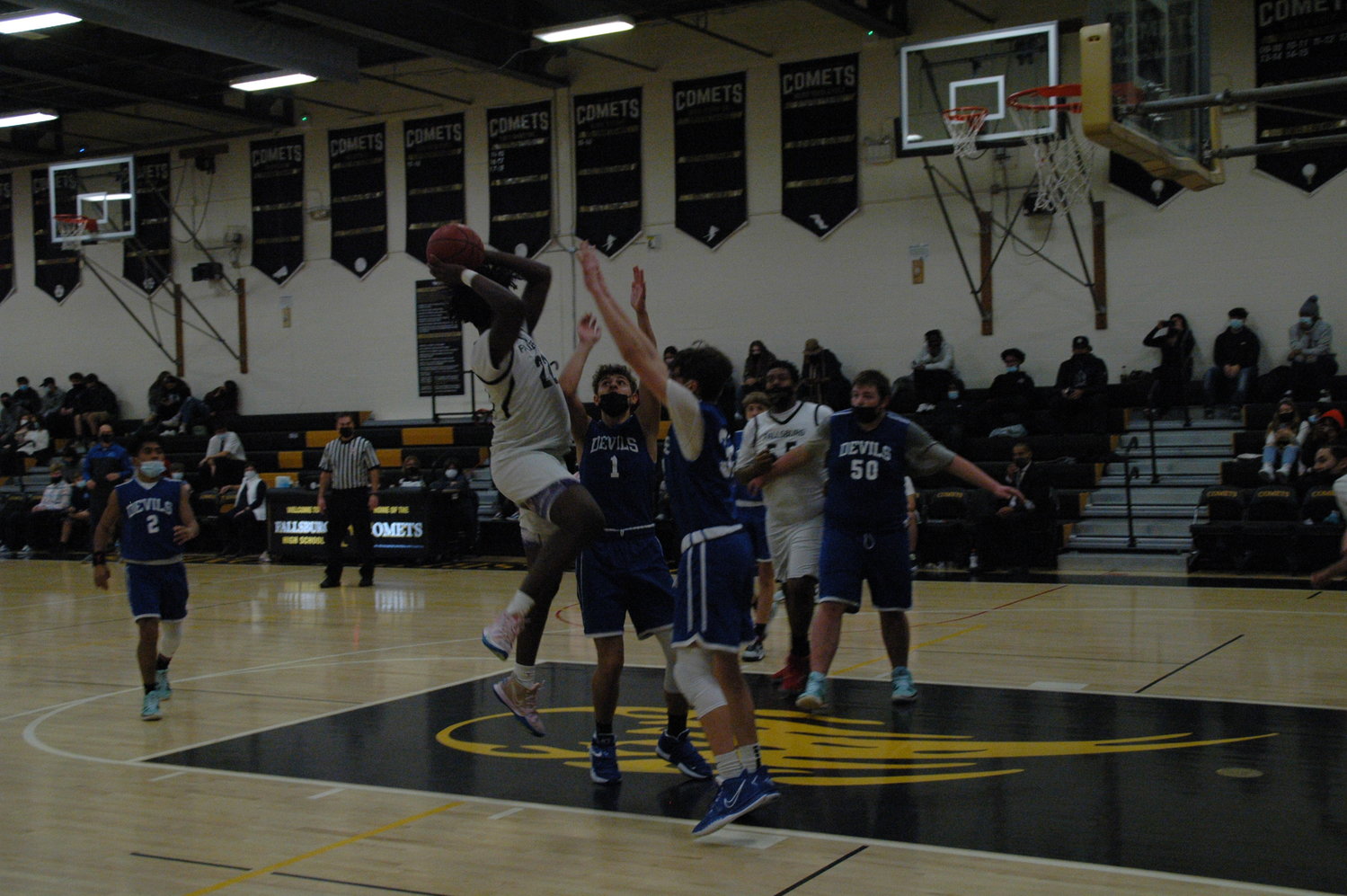 Eugene Johnson pulls up for a shot in the paint. He led all scorers with 24 points in the Comets’ win over the Blue Devils.
Anthony Morgano | Democrat
Posted Friday, December 3, 2021 6:20 am
Anthony Morgano

FALLSBURG – The Comets hosted the Blue Devils on Wednesday night for the first game of the season. The stage was set by an electric JV game, with the Blue Devils overcoming an 11-point deficit to win 54-52. The Varsity game was a bit more one-sided, with the Comets nearly leading from start to finish and winning 55-46 on opening night.

The Comets produced a lot of their offense in the paint, with their two big men, Eugene Johnson and Akinde Bryan, scoring 24 and 14 respectively. Throughout the night, Fallsburg used their size to stifle the Roscoe offense, forcing turnovers and grabbing rebounds on both sides of the ball.

Thanks, in no small part, to the size advantage and skill of the Comets’ bigs, Fallsburg outscored Roscoe 19-6 in the second quarter.

Both sides had some sloppy plays, which is to be expected in the first game of the season. The Blue Devils found their stride in the second half, outscoring the Comets by 8, but the 17-point halftime lead for the Comets was enough to seal the win.

Leading the scoring for Roscoe, Alaniz Ruiz was able to net 23 points, including 19 in the second half while trying to spark the comeback.

“Fallsburg’s bigs really dominated the court,” Roscoe coach Mike Hill said. “We didn’t have an answer for them, but we worked hard and played with a positive attitude.”

After Fallsburg’s dominant victory in their first game, coach Lionel White said, “We did a good job of attacking the basket and making our defense our offense. It was a good start for our first game, but we still have to get better. We’re going to enjoy this win tonight and get back to work tomorrow.”

Branches of the tree

Public hearing held for Avon Park project
THOMPSON — With over 100 people on the Zoom video app, a special meeting of the Thompson Planning Board was held on January 19, to hear a presentation and public comments on the Avon Commercial …

‘We will not leave anyone out in the cold’
MONTICELLO –– As the opioid crisis rages on, frustration has mounted as community members and leaders have watched the death toll continue to rise. But as local, state and elected …