FERNDALE—Two of the largest producing farms of Foie Gras, a French term for "fat liver," are in danger of laying off a large number of workers or shutting their doors permanently once the New … 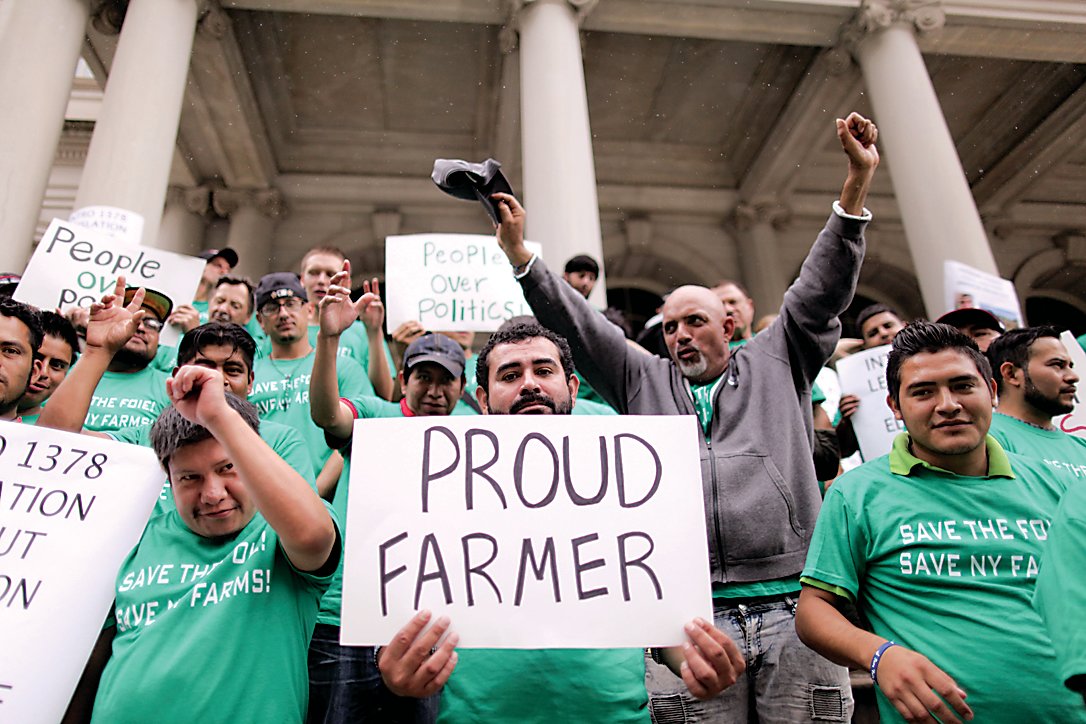 Farm workers took to the steps of NYC’s City Hall in 2019 to protest the ban on Foie Gras in NYC. Sullivan County’s Foie Gras farms are continuing the fight by filing a lawsuit against the ban that will take into effect in November banning the product from being sold at restaurants and grocery stores.
Patricio Robayo | Democrat
Posted Tuesday, July 5, 2022 6:38 am
By Patricio Robayo

FERNDALE—Two of the largest producing farms of Foie Gras, a French term for "fat liver," are in danger of laying off a large number of workers or shutting their doors permanently once the New York City (NYC) ban on the product goes into effect in November 2022.

Hudson Valley Foie Gras and La Belle Farms have been fighting back against a potential ban for many years and now have filed a lawsuit against the NYC ban passed in 2019, stating the city is overstepping its jurisdiction.

According to the lawsuit, NYC Local Law 202 passed in 2019 by a 42-6 vote is invalid because it violates Section 305-a of N.Y. Agriculture and Markets Law, which states its protection for farmers “against local laws which unreasonably restrict farm operations located within an agricultural district.”

Cornell Cooperative Extension Sullivan County stated in a letter in 2019 that based on their observations, Hudson Valley Foie Gras practices qualify as "farm operation.”

The farms requested a review of the ban by the Department of Agriculture and Markets, and in August of 2020, in a letter to then NYC Mayor Bill de Blasio, stated that its initial review found "the local law violates the state law in protecting farm operations from local laws that restrict farm operations unreasonably.”

In response, NYC Chief Division of Legal Counsel Stephen Louis said both farms are well outside the city limits. According to city lawmakers, since the local law is not preventing Sullivan County farms from selling their product elsewhere and the ban will not be in Sullivan County's Ag district, the ban should stand.

Marcus Henley, Vice President of Hudson Valley Foie Gras, said they filed the lawsuit because “the law is wrong, it's illegal. And if the state for whatever reason, is not going to enforce its laws, then we have to go to court.”

The NYC local law looks to ban the sale of “force-fed products” like Foie Gras in restaurants, grocery stores, and other types of food services that would use the product.

Jeremy Unger, Communications Director for NYC Councilwoman Carlina Rivera, who is a strong supporter of the ban, told the Democrat in 2019, “This common-sense bill that will end the force-feeding of animals, an exceptionally cruel and inhumane practice that has been banned in a wide number of countries.”

People for the Ethical Treatment of Animals (PETA) said the process leaves many birds with difficulty standing because of their engorged livers.

Henley argues the ban would cause severe economic fallout for the area as both farms utilize local feeders, employ a large number of farm workers and help supply manure to local farms in Sullivan County.

Henley went on to say that he has welcomed anyone from the city to come to inspect the farms and that invitation has not been taken by NYC Councilmembers.

In 2019, Councilwoman Carlina Rivera's office told the Democrat, “Councilwoman and her staff do not plan on participating in an arranged tour.”

However, the Department of Agriculture and Markets visited the farms and after an inspection in 2020 it said in a letter to NYC Mayor de Blasio, "Should the ban go into effect, it would result in a significant loss of sales for both farms and require a reduction in employees.

According to the lawsuit, a significant portion of the business will be eliminated as NYC restaurants are large buyers of the product, and in turn, the farms said they would have no choice but to lay off a large amount of their workforce.

Hector Saravia is co-founder of La Belle Farms Inc., one of the two farms filing the lawsuit, said he has been working tirelessly to explain to NYC lawmakers that the practices his farm uses are humane.

Saravia said he even changed the way the feed is given to the ducks going from a smaller plastic tube.

Foie gras comes from the livers of Moulard ducks, a hybrid species using Pekins and Muscovies ducks. The process of creating a fatty duck liver involves inserting a tube down the throat of the duck during its final weeks before the animal gets slaughtered. Cornmeal is introduced for several seconds into the feed sack and the process is sometimes done multiple times a day.

This process causes the duck's liver to engorge quickly, which animal rights advocates say is cruel to the animal.

Once the duck is slaughtered, not only is the duck liver sold at a high price, but all aspects of the duck are used, from the bones and carcasses to the feathers, which are sold to companies that use fill for coats and blankets.

Saravia feels that those who voted for the law do not care for the welfare of the animals because no one ever visited the farms to see for themselves how the process occurs.

“I really believe it's not about the animals anymore; they are really going for some groups that are supporting them and something else because ...if they care so much for the animals, come and see them,” added Saravia.

Saravia said the economic impact will be far-reaching and will significantly affect the Town of Liberty and Sullivan County.

According to Saravia, there will be a hearing in August in NYC regarding the ban.

The Democrat reached out to the legal team representing  NYC in this lawsuit, but did not receive a response before presstime.

Sullivan County Chairman of the Legislature Rob Doherty said, “Hudson Valley Foie Gras ranks among the finest such producers in the world, and they are a significant employer and community supporter in Sullivan County. The allegations of animal cruelty are false - the ducks are treated humanely by workers who are given gainful employment and spend their salaries locally. Hudson Valley Foie Gras should be celebrated for these achievements, not scorned by people who do not truly understand how they operate.”

Assemblywoman for the 100th District, Aileen Gunther said, "Hands off our farms," stating that the local law is overreaching.

“I am on the side of our duck farm. I support them. We [the farms] export all over the world and create many, many jobs. How far are [they] going to go? We have a lot of folks in New York City that create a judgment before they dig deeply [sic] into the issue,” said Gunther.

Sullivan County District 6 Legislator Luis Alvarez, whose district encompasses both farms, also shared his disappointment in the ban and how it will affect the local economy.

“They [the workers] live in Sullivan County, they shop right there, they go to our schools and pay taxes,” said Alvarez.

When he was chairman of the Sullivan County Legislature, Alvarez and farm workers from both farms stood on the steps of City Hall in Manhattan to plead their case against the ban in 2019. He said their voices had fallen on deaf ears with the NYC Councilmembers refusing to visit the farms.

Alvarez added, “I'm really concerned that this will be devastating for the Town of Liberty.”