FARTS have fun in the Catskills

While sitting in our living room on Thursday, April 28, and looking out the window, Sandy and I observed several Brass Era cars heading toward Callicoon.

After seeing eight or nine go by our house …

FARTS have fun in the Catskills 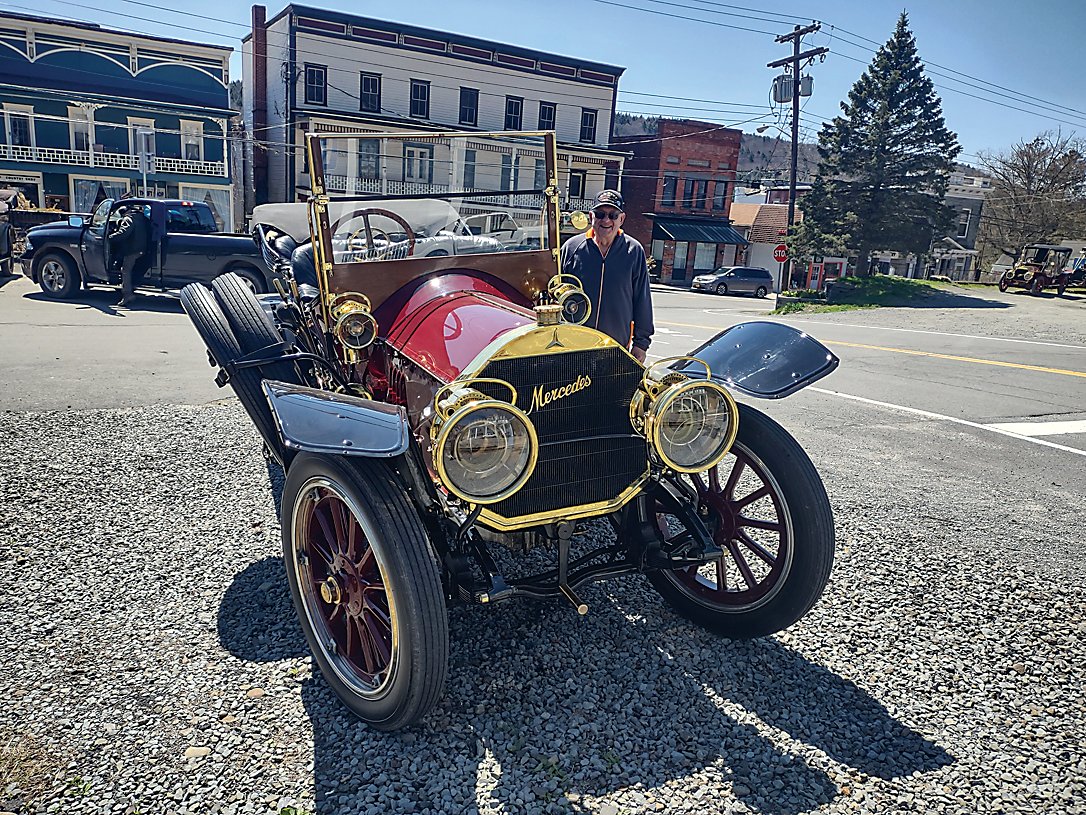 This classic Mercedes was among at least 24 antique cars that rolled through Callicoon last week.
Contributed by John Theadore 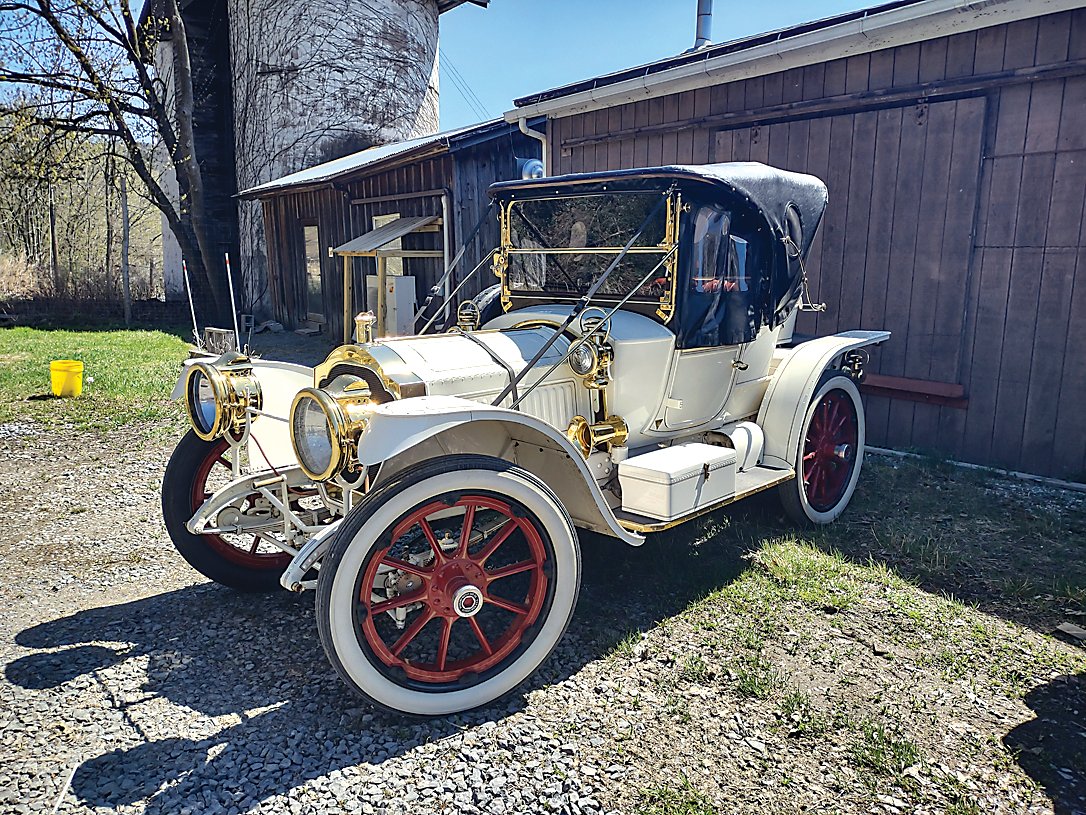 Brass and other unique features were on full display.
Contributed by John Theadore 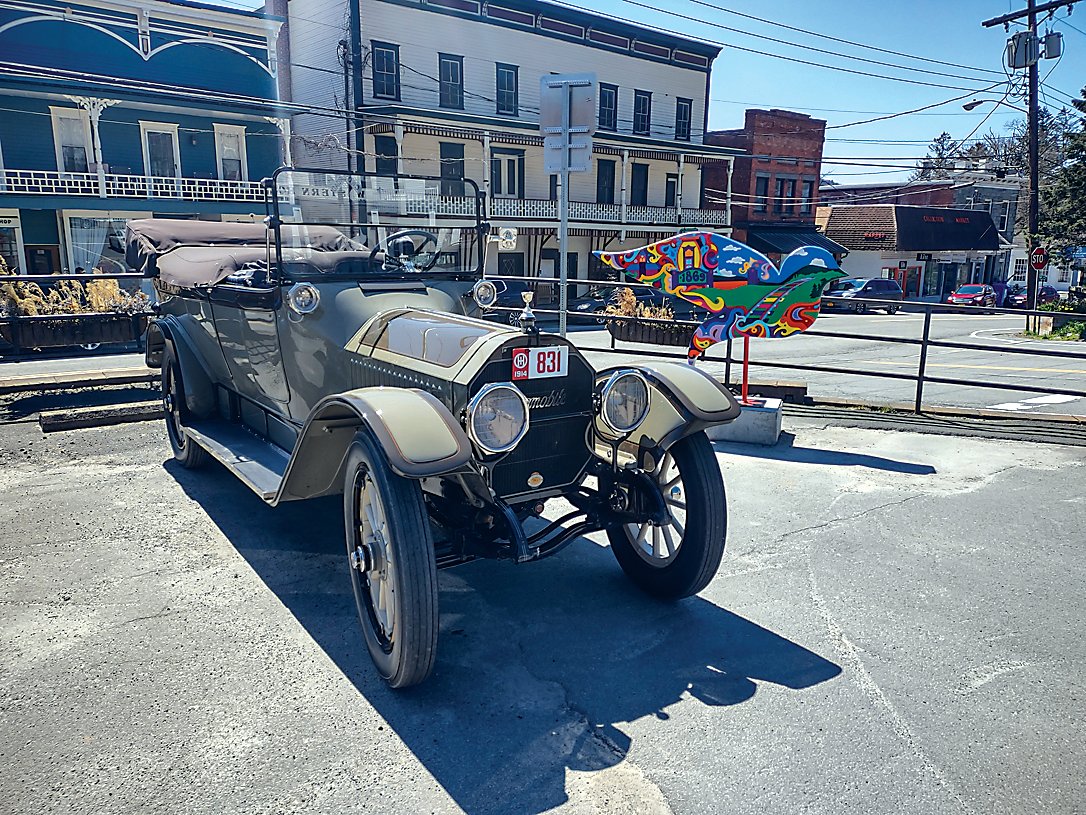 This stylish vehicle from 1914 was among many classics in Callicoon on Thursday.
Contributed by John Theadore 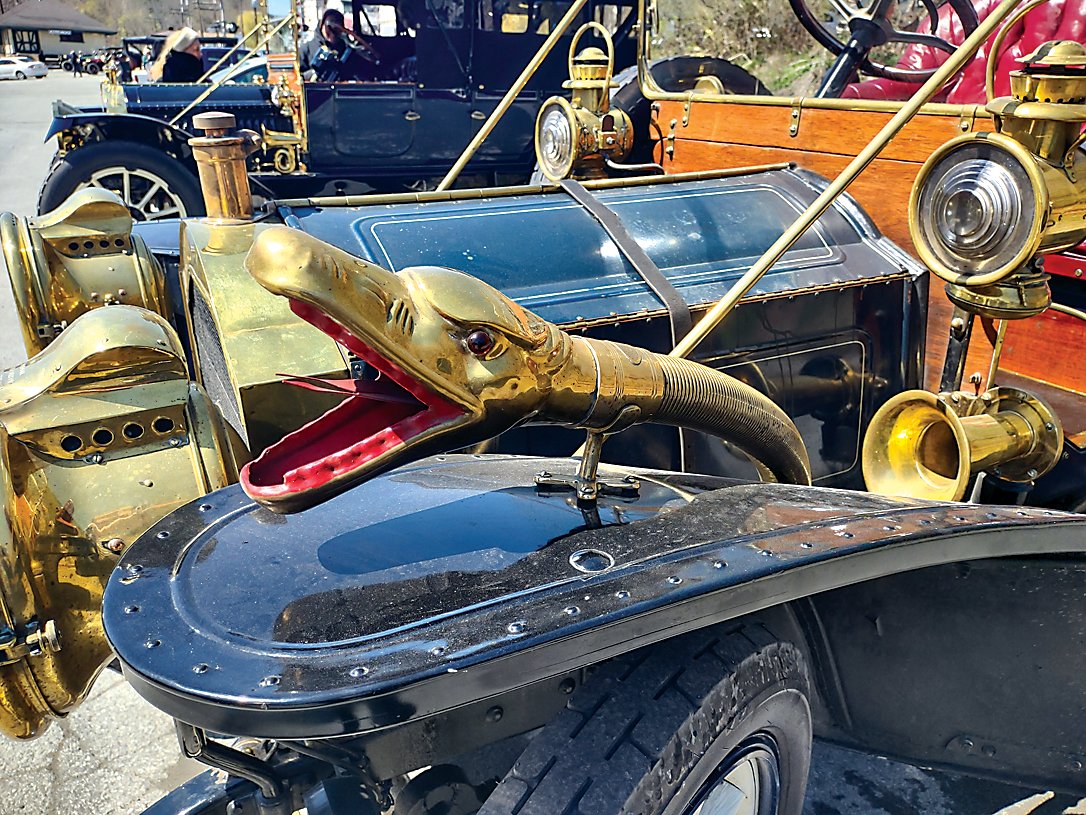 This Packard was displaying a Boa Constrictor horn manufactured in England.
Contributed by John Theadore 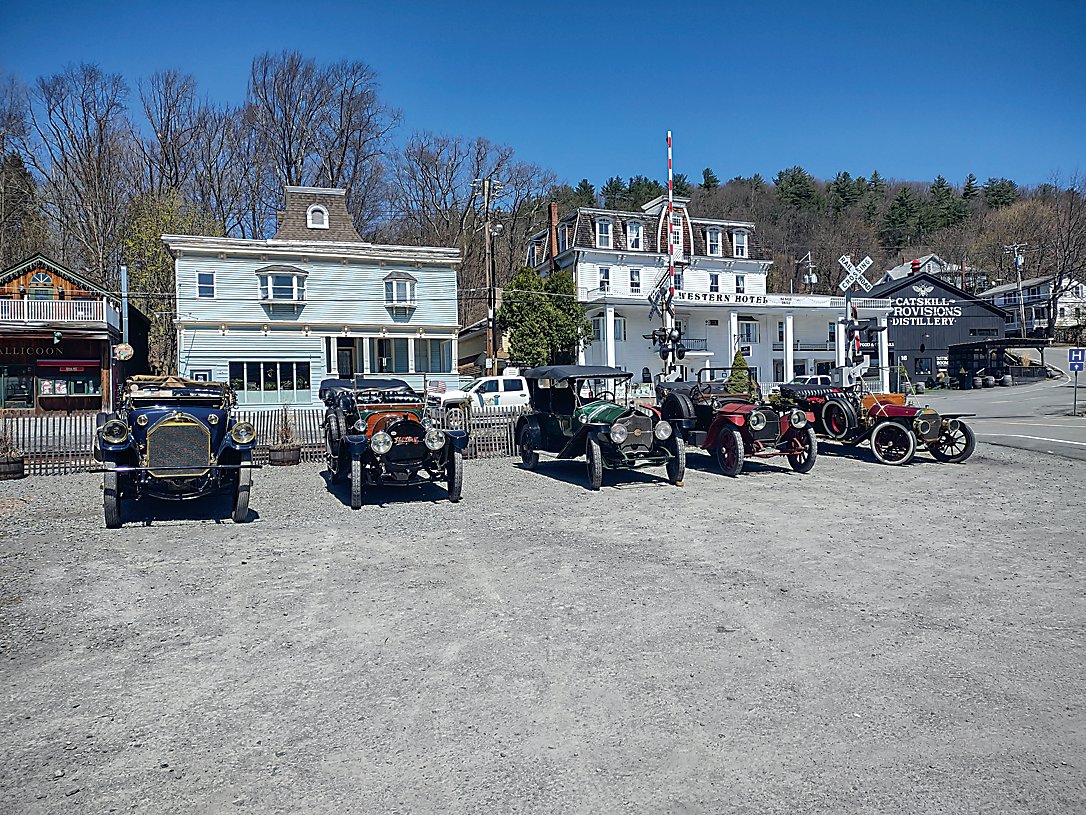 Friends of Ancient Road Transportation (FARTS) had trailered their vehicles to the Eldred Preserve for a spring tour of Sullivan County.
Contributed by John Theadore 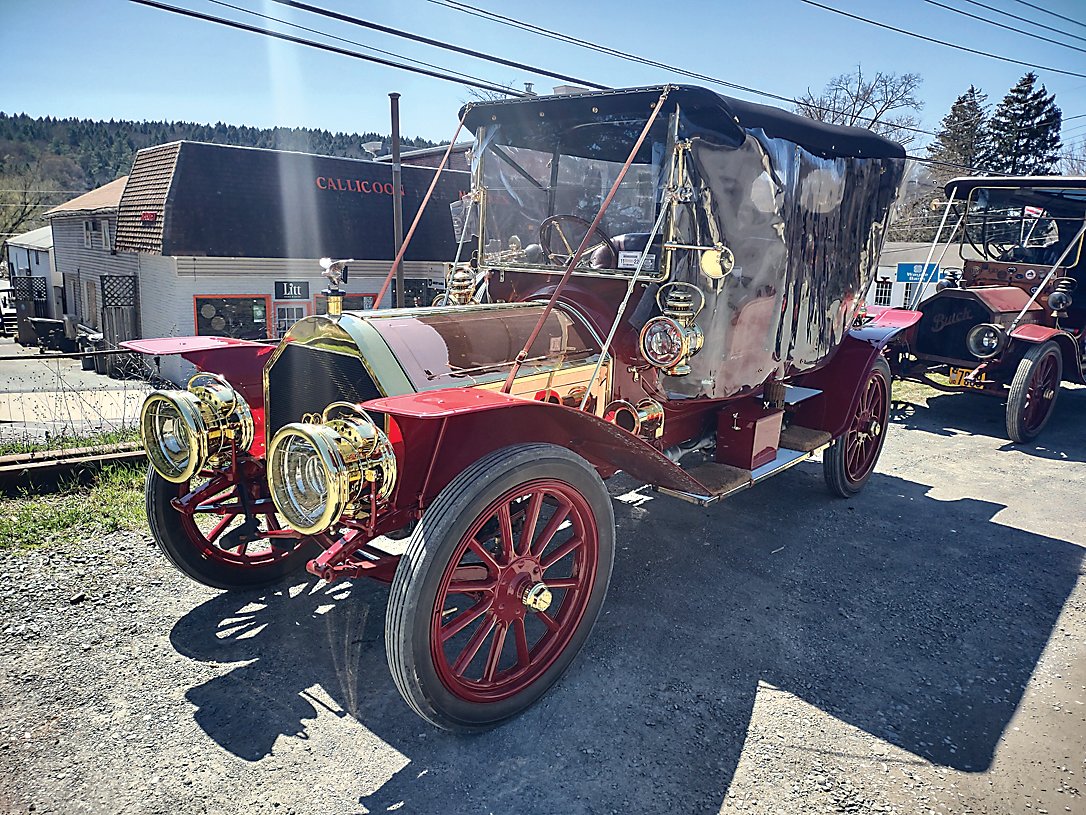 The older modes of transportation had many unique features from their headlights to the hood ornaments. It was a chilly and windy day last week and many of the cars pictured have no heating system. The drivers had to bundle up or zip up some of their open top vehicles.
Contributed by John Theadore 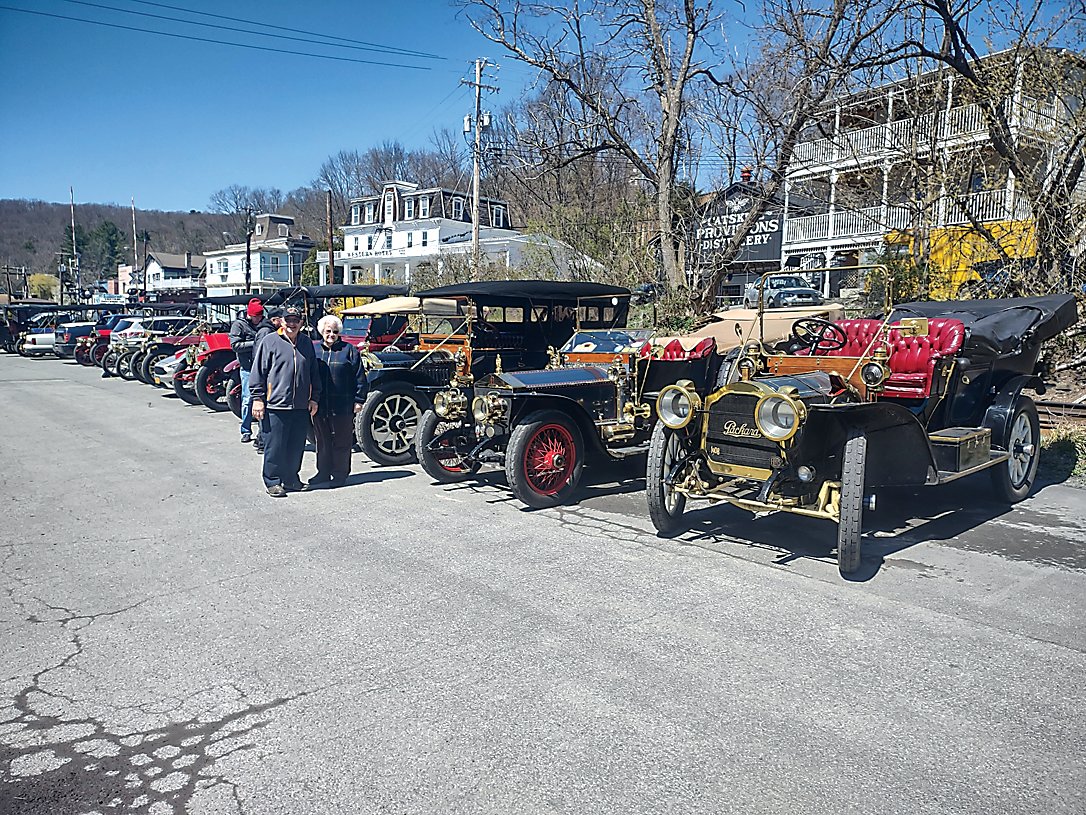 Sandy and Art Flynn, pictured at the center of the photo below, toured the unique collection of vehicles whose owners belong to the club Friends of Ancient Road Transportation (FARTS). The Club had been on a tour of the region starting at the Eldred Preserve. The collection included brands such as Locomobile, Packard, Oldsmobile, Buick, Rolls Royce, Mercedes Benz and more.
Contributed by John Theadore
Previous Next
Posted Tuesday, May 3, 2022 6:10 am
By Sandy and Art Flynn

While sitting in our living room on Thursday, April 28, and looking out the window, Sandy and I observed several Brass Era cars heading toward Callicoon.

After seeing eight or nine go by our house on Pennsylvaia’s ‘Callicoon Road’ we decided to follow them to see where they were going. On the way, we saw one stopped on the side of the road and by the time we stopped and turned around, it was underway again.

We then followed two antique vehicles to Callicoon where a 1909 Packard turned off to Benzina Markets on Audley Dorrer Drive to get gas and secure his windshield.

We pulled in by them, I introduced myself as the President of the Wayne-Pike Region Antique Automobile Club of America and spoke with the driver to find out who the group was and what their plans were for the day.

They informed us that they were part of the Friends of Ancient Road Transportation (FARTS) who were on a prearranged tour in the Catskills.

Art assisted the driver in duct taping his windshield to the frame of the vehicle. His side brackets had broken, and the windshield was hitting him in the face while he was driving.

A group of twenty-four member cars of the FARTS were on their Spring Catskill Tour, had left the Eldred Preserve earlier in the morning. Their itinerary for the day was going to take them through the Masthope, PA area, Calkins, Milanville, Callicoon, and Bethel Woods Center for the Performing Arts before returning to the Eldred Preserve.

They had already made a stop at a sculptor’s house in the Milanville, PA area and were stopping in Callicoon for lunch. They had been given the names of several of the eateries in town. After spending about two hours parked near the train depot and in the parking lot across the road from the depot, they were on their way to the Woodstock Museum in Bethel.

In talking to some of the people we found out that they were from Michigan, Illinois, New York, Pennsylvania, and the New England area and had trailered their vehicles to Eldred for this part of their spring tour.

We walked around the vehicles and took several photos, thanks to our nephew, John Theadore (we had not brought a camera or phone with us when we left the house).

Among the brands of vehicles seen were Locomobile, Packard, Oldsmobile, Buick, Rolls Royce, Pope Hartford, Pierce Arrow, Thomas Flyer, Cadillac, Ford, and Mercedes Benz. Plaques on the Rolls Royce identified it as having toured with a group through England and Spain.

Vehicles had to be built before 1914 to be in the group and on the tour. They did have a "chase" vehicle that was following them that carried spare parts and extra gasoline for an emergency.

A unique feature on one of the Packard’s was a Boa-Constrictor horn, by a British Manufacturer, mounted on a front fender. The owner was gracious enough to squeeze (with two hands) the bulb to make it sound off! It was quite loud but not loud enough to warn a vehicle in front of you that you were behind him.

Had we not observed the vehicles going past our house, we would not have been able to enjoy the beautiful collection of cars. Some vehicles were nicely restored while others had had minimal work done to them, so they had their original patina.

Because it was such a chilly day, many of the people in the group had long fur coats on to stay warm as they did not have heaters, and most were open cars. Other people, who happened to be in town at the time, took advantage of walking among the vehicles, taking photos, and talking to the owners before they went on their way.

Previous tours have taken the FARTS on tours around the Great Lakes or a tour from Florida to Maine. We don’t know where else in the Catskills they were headed, but we were glad to have been able to meet and greet some the people while they were in Callicoon.

After having just written to the editor a couple of weeks ago about a 1912 Alpena that was in Callicoon at one time, it was like history repeating itself having brass-era cars in Callicoon once again.