Fast start, bumps in the road for Monticello

WALLENPAUPACK – Basketball is a game of runs. So too are seasons with their flash points and struggles. For the Monticello Panthers, their uplifting 80-43 victory over New Paltz in front of an …

Fast start, bumps in the road for Monticello 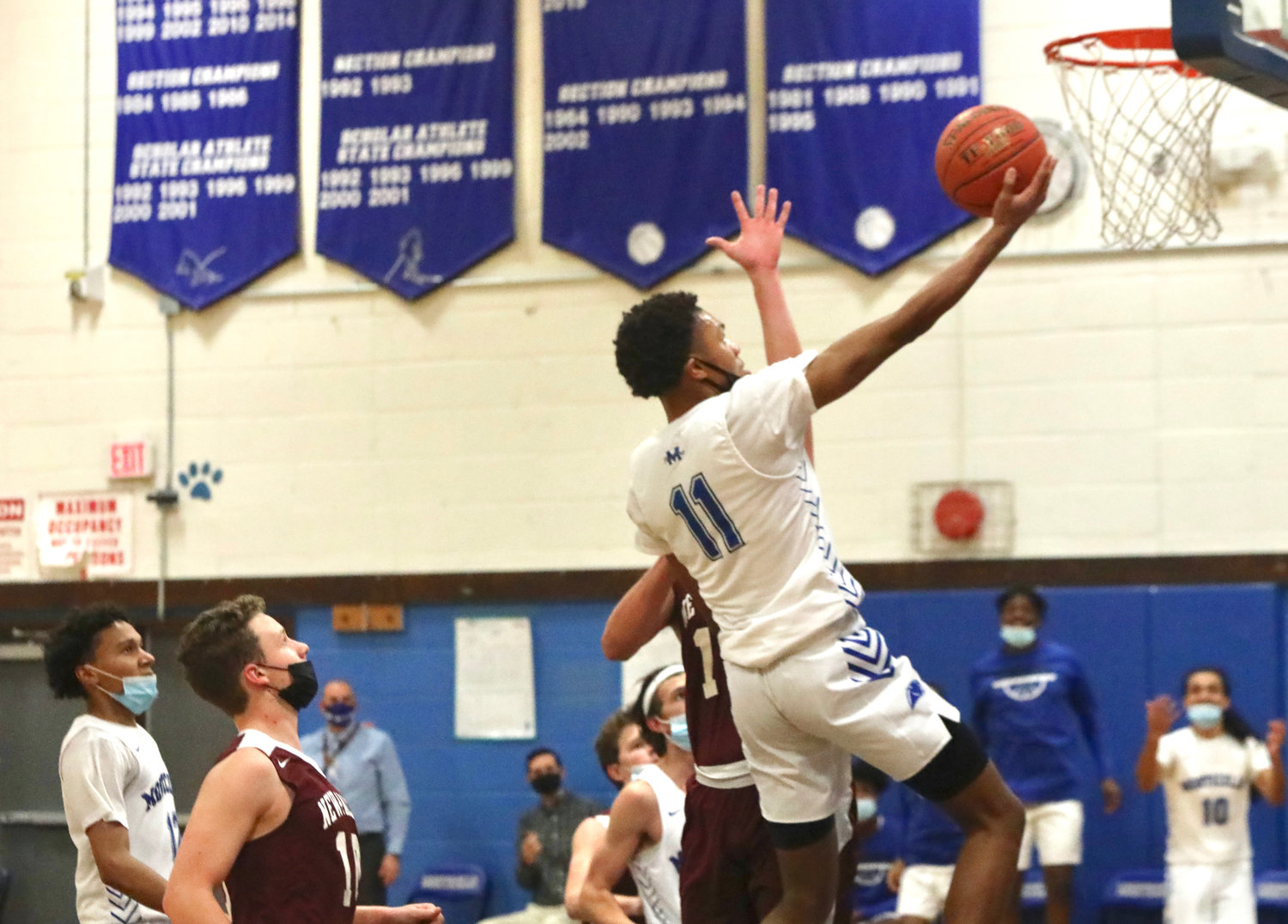 Monticello senior Michael Mingo scores two of his team-high 18 points in the opening night 80-43 win over New Paltz. Mingo was subsequently named to the All-Tournament team in the Wallenpaupack Lake Region Tip Off Tournament wherein the Montis were swept for the first time in their annual participation in the highly competitive Classic.
Richard A. Ross | Democrat
Posted Tuesday, December 14, 2021 6:20 am
Richard A. Ross

WALLENPAUPACK – Basketball is a game of runs. So too are seasons with their flash points and struggles. For the Monticello Panthers, their uplifting 80-43 victory over New Paltz in front of an enthusiastic home crowd was a resounding start to the season. After all, it was the Huguenots that robbed them of a sectional title in 2019 with their 69-67 OT win. Speed, agility and great defense sparked the win with Michael Mingo posting 18 abetted by 14 from Joseph Russo, comprised of four treys. Judah Brown and Pedro Rodriguez added 11 apiece.

“I’m so proud of the way the guys played all night long. We held them to one shot and didn’t give up a lot of offensive rebounds. We made shots when we needed to. Every team got in the book. It was a total team win. Russo reflected on the prior encounter with New Paltz, “After my most challenging loss it was nice to get this win today.”

Three days later it was on to the Lake Region Tip Off Class Tourney in Wallenpaupack, an annual rite of passage, to clash with PA schools in the no-shot-clock encounters.

The Montis have had their share of success against mostly larger schools over the years. In the Chris Russo era, they have been 3-3 in the championship game. Coach Dick O’Neill won three times during his reign too. But this year was another matter. In the opening round the team ran into the Nazareth Area Blue Eagles, a team that outsized them and played stifling help defense. Monticello was missing three bigs who were unavailable. Forced to play a four-guard offense, the Panthers were victimized 66-34.

Monticello had never been swept in the tourney but this year would be the first instance as the Panthers lost 70-41 to the Wallenpaupack Buckhorns in the Consolation game. Playing short-handed again, they were torched by guard London Calabrese’s seven three-pointers. The Buckhorns canned 11 from downtown. It seemed that whenever the Monti’s got it close or made a key defensive stop, the sharpshooter would bury a three to neutralize Monticello’s effort. A tightly officiated game and the no-shot clock anomaly didn’t help matters.

Michael Mingo led the team with 11 and was named to the All-Tournament team as the Montis fell to 1-2.

Russo assessed the damage, “We gave up too many threes to good shooters. We played hard and stuck to our three “E”s: energy, effort and execution. We battled back to get the game close but never got the break to get over the hump. They’d make a tough shot, we’d miss one and the loose ball bounces to the open shooter. At the end of the first half, we got it down to nine with 35 seconds to go. We got a stop and then an untimely turnover lead to another trey. That was how the game went.”

Powerful Nazareth won the championship game by ousting Stroudsburg 51-28. Russo expressed his thanks to AnnMarre Simons and Jim McGinnis for hosting the tournament. “They do a fantastic job and we are happy to continue our tradition of playing in the Tip-Off Classic.”

The Montis host the annual Jingle Ball Classic tourney this weekend leading off against Burke. Valley Central will play Wallkill in the other opener.