FALLSBURG - On May 2, Fallsburg Central School District resumed presentation of Al Rasnick Do the Right Thing Awards to four worthy students. Bart and Kathy Rasnick were present to acknowledge the … 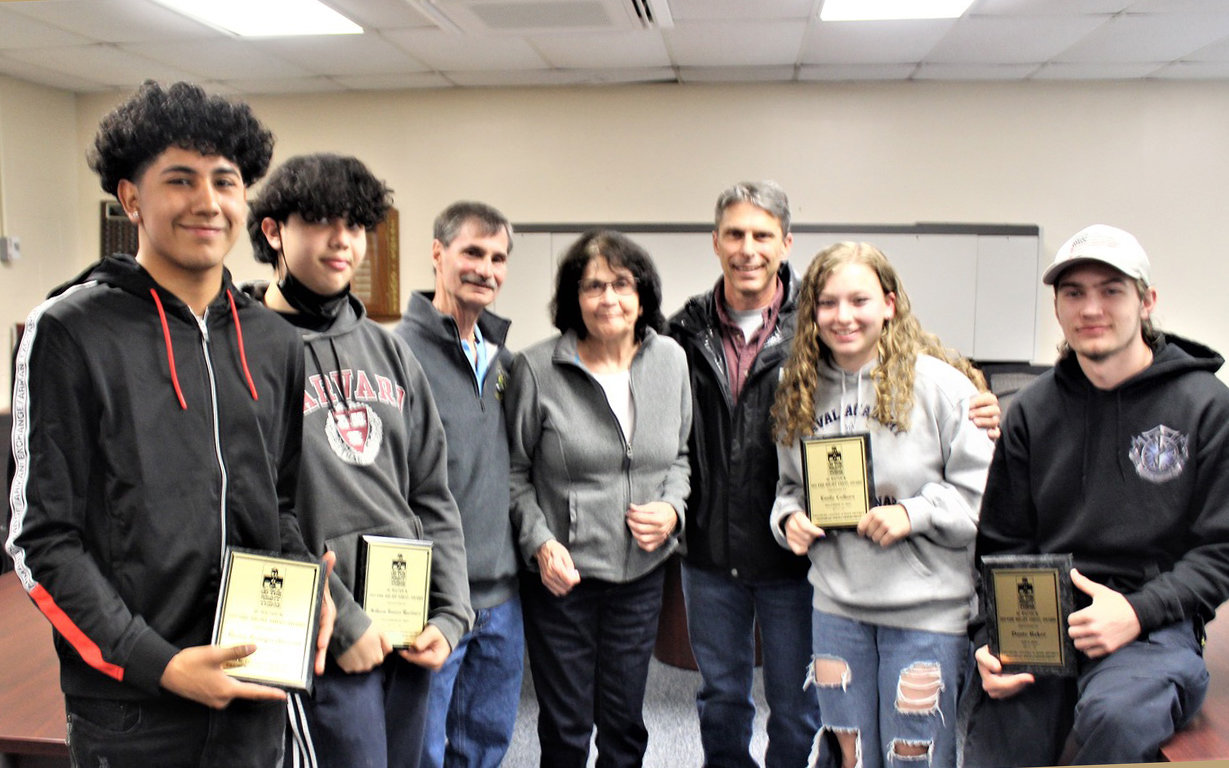 FALLSBURG - On May 2, Fallsburg Central School District resumed presentation of Al Rasnick Do the Right Thing Awards to four worthy students. Bart and Kathy Rasnick were present to acknowledge the students with special plaques and a pizza and salad lunch in the Board Room for families, friends and staff.

Principal Kyle Roddey thanked the Rasnick Family for their generosity and support of the award that began in 2004. Superintendent Dr. Ivan Katz thanked the family for recognizing students for exemplifying good actions and model behavior.

Bart Rasnick spoke to the families of award recipients stating that good behavior originates in the home and parental support of education. He and his wife Kathy were pleased that the award was being presented again.

The award recipients for 2021-2022 are Ryan Zempoaltecatl, Willson Torres Martinez, Emily Collura, and Dante Baker. Teacher Evan Mullen nominated Ryan for his maturity, growth and making good decisions regardless of social pressure. Mr. Mullen has known Ryan as his student since seventh grade. Willson was nominated by teacher Ms. Tammy Slick as an inspiration inside and outside the classroom. He is conscientious and faces challenges and does the right thing even when things are hard. Ms. Slick expects that Willson will do great things in his future.

Dr. Katz nominated Emily Collura. I would like to nominate Emily Collura for the Do the Right Thing Award. As a voice for her peers, Emily lead the charge for cafeteria improvements in the Junior/Senior High School. She organized and presented positive feedback and presented the messages to the Board of Education. In Dr. Katz’s words, Emily continues to make a difference in the school district.

The final award for Dante Baker came through a nomination by Principal Roddey. When a fight broke out in the school, Dante stepped up and helped break up the fight. He showed great bravery and made the situation safer for others. This is not unusual for Dante. He volunteers with the local fire department, and he is an exemplary young man.

A special highlight of the afternoon was when Joe Collura, member of the BOE and Emily’s dad, asked to say a few words about Bart Rasnick’s dad, Al. As a young man, Joe wanted to start a lawnmowing business to earn money for his school and to help out with home expenses. He went to Mr. Rasnick’s small engine repair business and found a rebuilt lawn mower. When he asked the owner how much it cost, the number was much higher than young Joe could afford. Then Mr. Rasnick, who had a gruff voice, told Joe that he would not sell the machine to him.

Joe was surprised, but Mr. Rasnick continued, “You can take the machine, use it, make some money and pay it off over so many months.” Soon Joe was out mowing, and the lawn mower got damaged pretty badly. He brought it back to the shop and showed Mr. Rasnick. He took a look and said he would take it back. Then he gave Joe another mower and told him that he wanted him to have it because he was doing a good job with his business. Joe Collura was forever grateful and grew that mower into a landscaping business with forty-five employees. This is what the Al Rasnick Do the Right Thing is all about.