FCSD honors two Coaches for the Wall of Coaching Distinction

FALLSBURG - At the Board of Education meeting on November 3, Superintendent Dr. Ivan Katz had the privilege of announcing that James McDermott and Martin Van Vleet will be the first two coaches to …

FCSD honors two Coaches for the Wall of Coaching Distinction 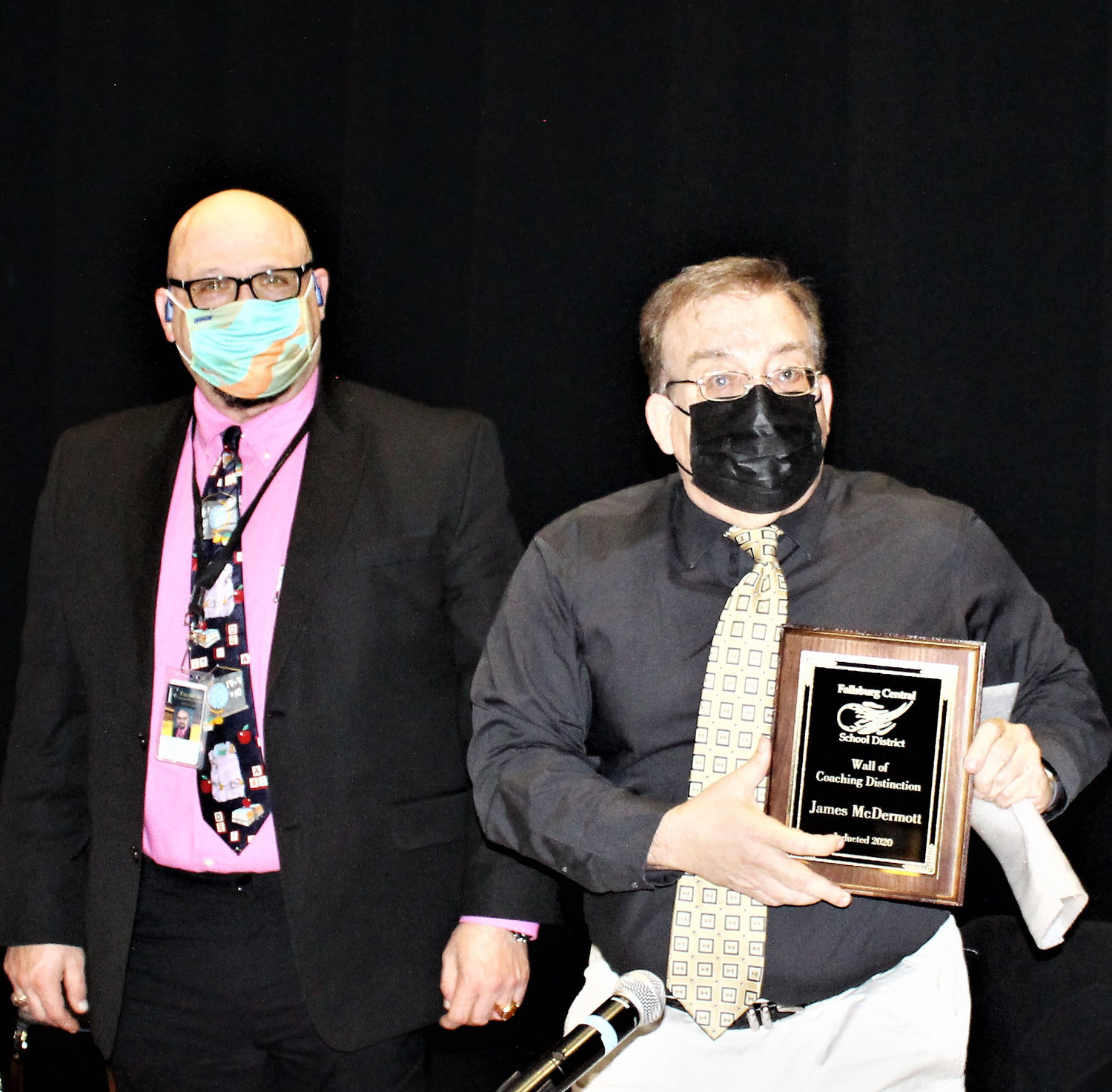 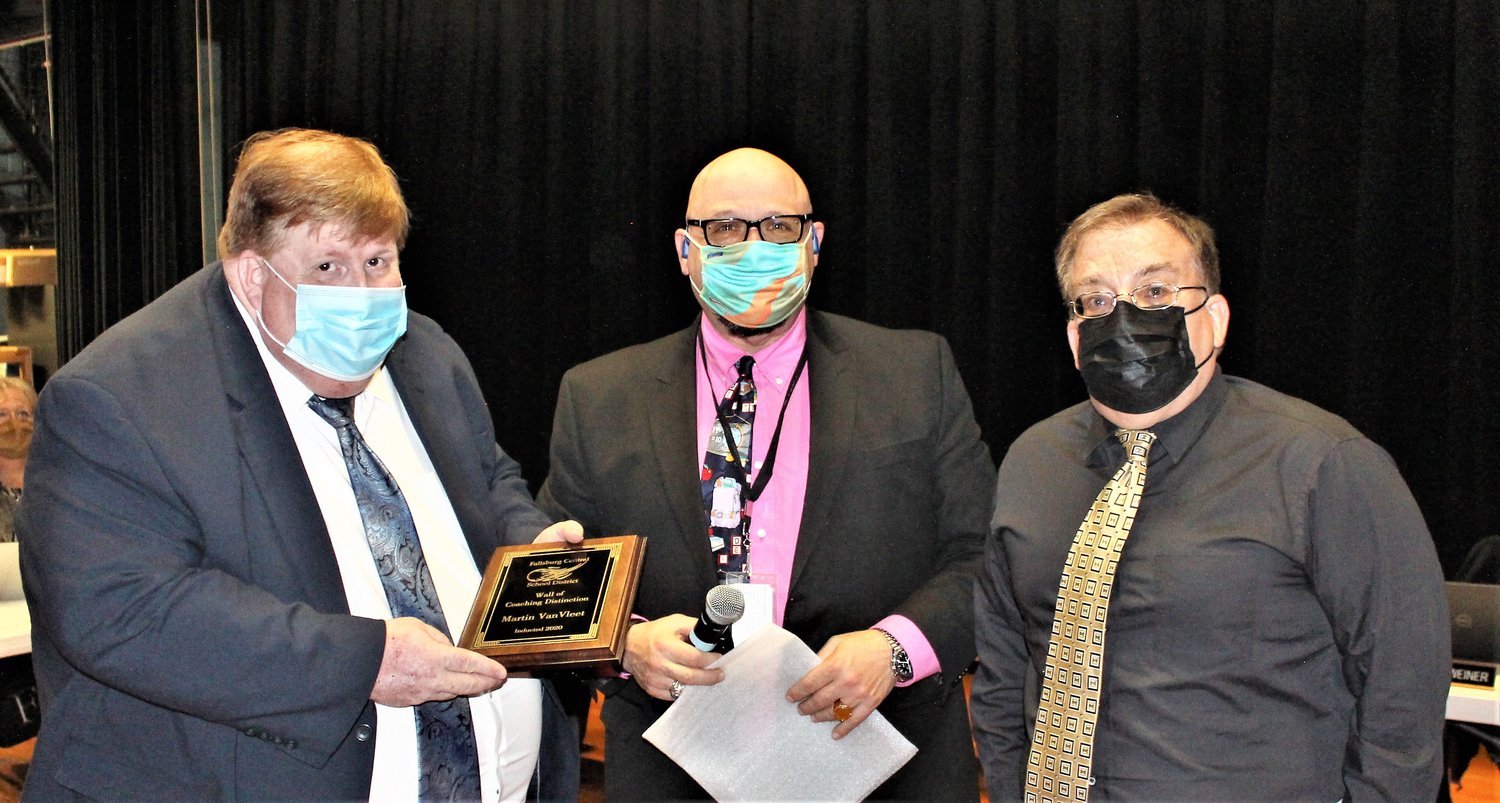 FALLSBURG - At the Board of Education meeting on November 3, Superintendent Dr. Ivan Katz had the privilege of announcing that James McDermott and Martin Van Vleet will be the first two coaches to have their name inscribed on the Fallsburg Central School District Wall of Coaching Distinction. Over the years, many outstanding coaches have enriched the lives of student-athletes. For those who made extraordinary contributions and experienced superb accomplishments as members of the Fallsburg community, the District has established this plaque at the entrance to the school gymnasium as a place of honor.

Dr. Katz then introduced BOE member, former student, former teacher and former Fallsburg coach Michael Weiner, who nominated both McDermott and Van Vleet for the awards. Mike spoke eloquently about the two men and their impact on the FCSD Athletic Program. He quoted many former athletes and coaches.

Both coaches were role models for him when he was a student and coach. They earned the respect of the Fallsburg community and all of Section IX. Current Fallsburg Chief of Police Simmie Williams and Fallsburg graduate stated, “When students of the 1960s,1970s and 1980s think of who should deserve this honor of coaching distinction, automatically they would think of coaches Jim McDermott and Martin Van Vleet. These two coaches brought our district together with glory on and off the court.”

Another former student, Robert Janeke, remembered the two coaches this way: “In our lives there are incredible people who inspire and mold our character and our future; their time, their unwavering dedication, their personal sacrifices to the sport and most importantly to the life development of their athletes did not go unnoticed, and they served as an example to all those students who looked up to them. I was one of the many students who looked up to them.”

Mike Weiner then read a letter from Coach McDermott, who just celebrated his 90th birthday. He thanked the Committee and the Board of Education for the great honor. He reflected on the many wonderful athletes he worked with and the assistant coaches and coaches that worked alongside him. He praised Martin Van Vleet as a great coach and an even greater man.

Dr. Katz presented James McDermott’s plaque to Mike Weiner. He then invited Martin Van Vleet’s son Wayne to come up to receive his dad’s plaque. Wayne was grateful for all the years his dad served as an administrator and coach at Fallsburg. He remembers how honored his family was when FCSD inducted his father into the Hall of Fame. Wayne thanked former player Ellie Patton and former player and coach Charlie Levine, who followed in the footsteps of Coaches Van Vleet and McDermott, for coming to share the evening with his family. Martin’s “baby” sister Gretchen came with her husband Irv to share the joy of the moment.

The ceremony ended with light refreshments and a chance for friends and family to reminisce about special basketball games and the excitement in the school gym. The Comets have a great history and Coach McDermott and Coach Van Vleet are an important part of it.