Schools from all over Section IX visit Roscoe to celebrate "Coach"

A lasting legacy in this world is all that one can hope for, and after more than half a century of coaching and helping to further athletics in Roscoe and beyond, “Coach” Fred Ahart has …

Schools from all over Section IX visit Roscoe to celebrate "Coach" 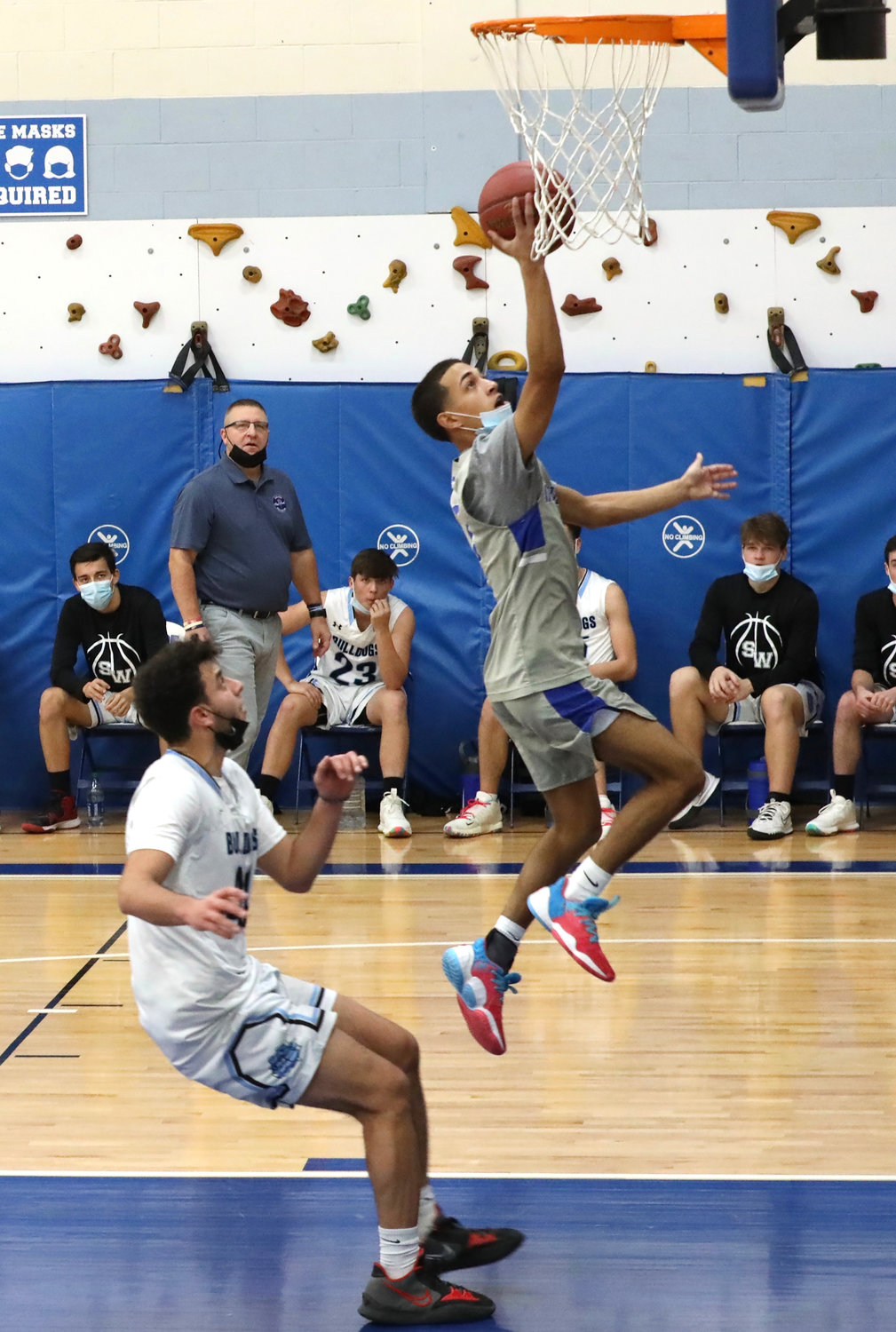 Monticello senior Pedro Rodriguez breaks away for a transition layup. He scored a game-high 22 points and had five assists in the Panthers’ authoritative win over Sullivan West.
Richard A. Ross | Democrat 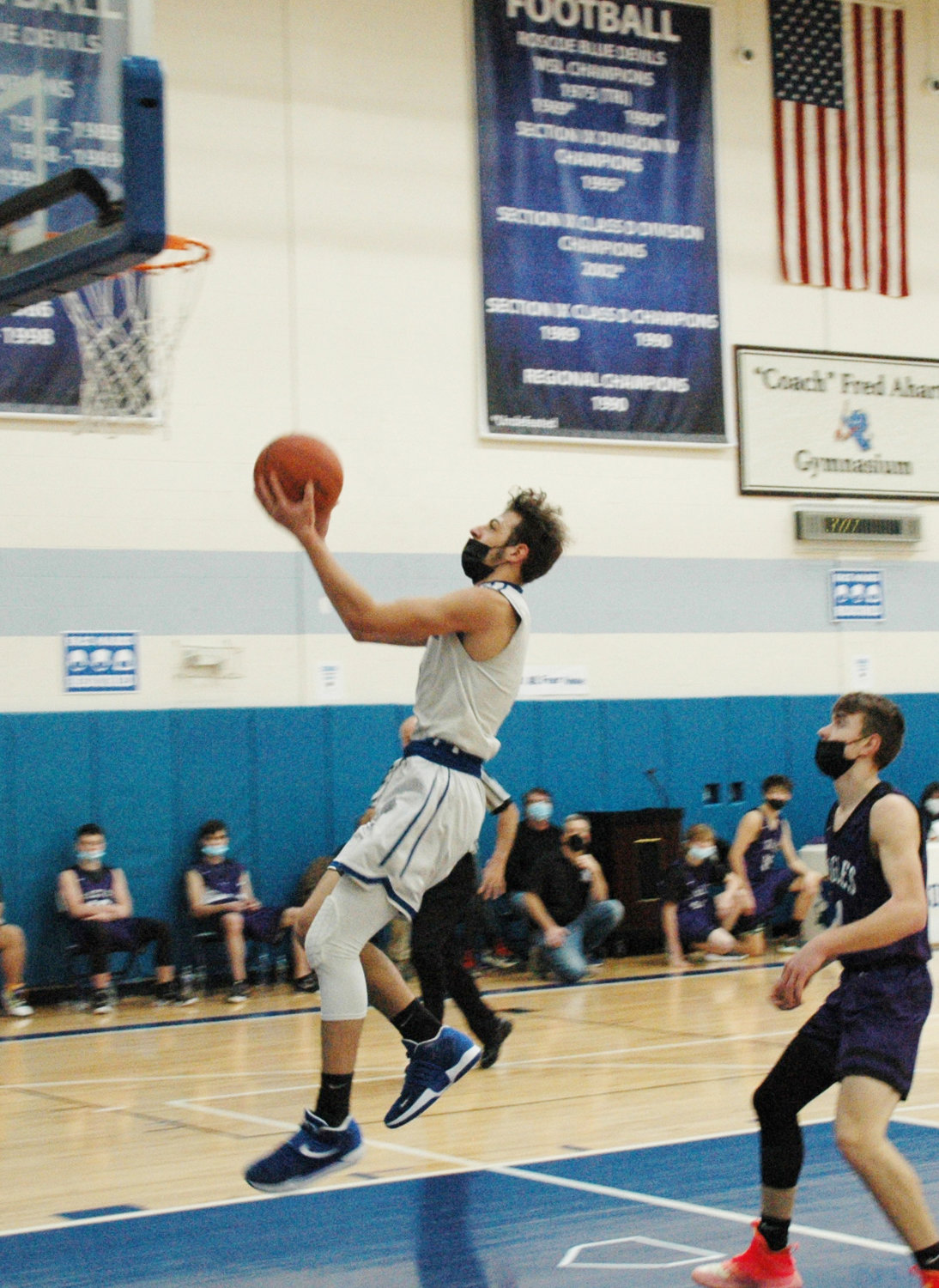 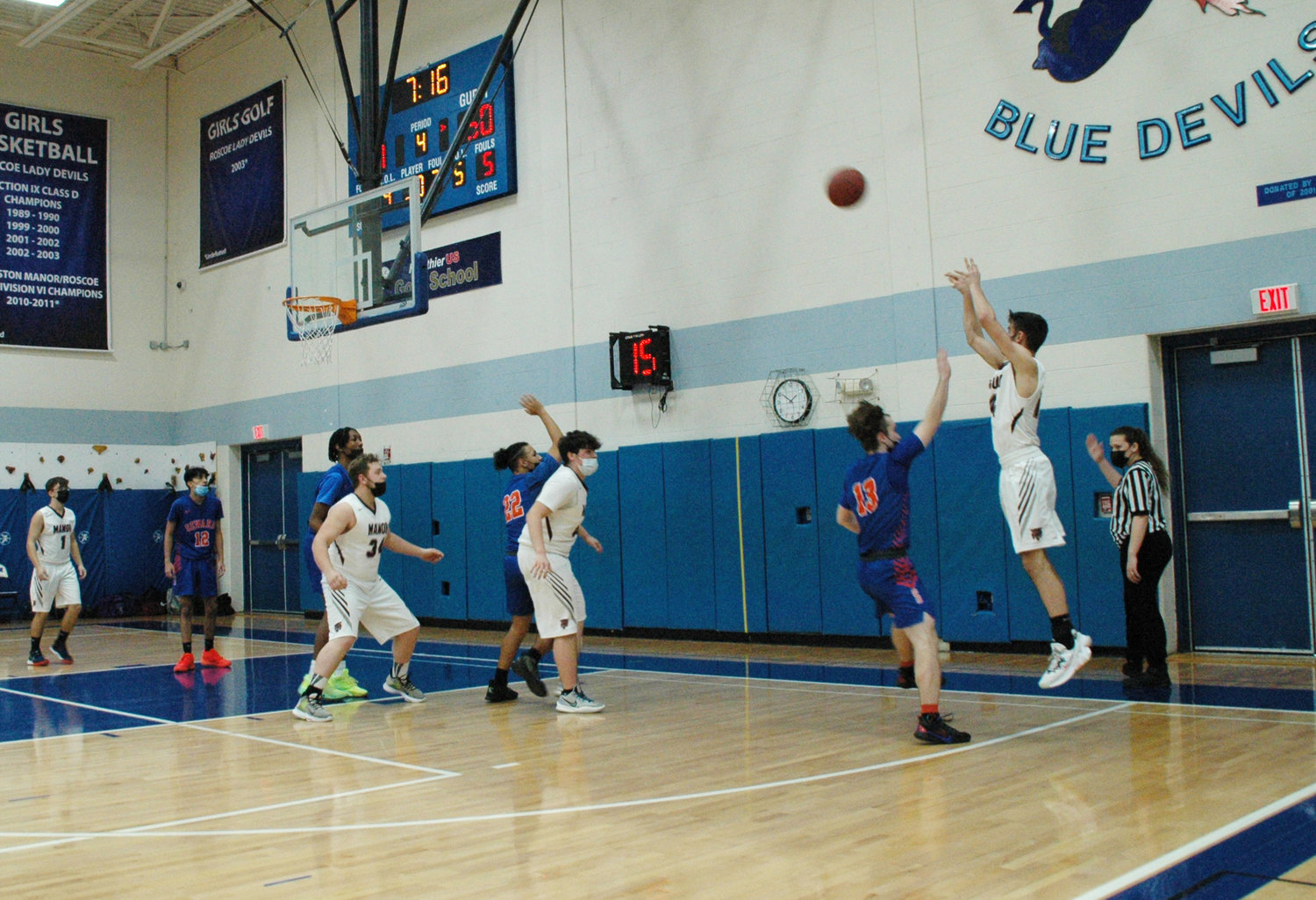 Joseph Gould lines up and fires from beyond the arc in a loss to Seward. Gould led Livingston Manor with 11 points.
Anthony Morgano | Democrat
Previous Next
Posted Friday, January 21, 2022 6:40 am
Anthony Morgano

A lasting legacy in this world is all that one can hope for, and after more than half a century of coaching and helping to further athletics in Roscoe and beyond, “Coach” Fred Ahart has achieved just that.

Coach Ahart’s legacy extends far beyond the Roscoe Central School District and the gym that bears his name. His hard work and compassionate demeanor earned him an induction into the New York Basketball Hall of Fame.

Coach built many strong relationships throughout Sullivan County, Section IX and beyond, including 51 years worth of inspired student athletes and coaching colleagues. Fred’s impact while he was alive inspired his family to create The Coach Fred Ahart Foundation in his honor, giving the Ahart family a way to carry on his legacy and further instill the lessons that he is remembered for.

The Foundation’s first fundraiser was a dinner and raffle at the Rockland House in November. On Friday and Saturday, thanks to a community full of people who loved Fred, the first annual Fred Ahart Foundation Games were held at Roscoe Central School.

Roscoe, Livingston Manor, Downsville, Monticello, Sullivan West and Seward all made their way to the Fred Ahart Gymnasium for a great day of respectful competition, one of many things that Ahart emphasized during his decades as an Athletic Director and coach.

Between Friday and Saturday, ten different teams took part in the event, which featured multiple guest speakers and a packed gym. Even with all the teams involved, there were still others that are hoping to get in on the action next year. The gym full of people there to watch some great Section IX basketball and donate to the foundation that honors a man who gave so much to Roscoe, Section IX and New York State.

Story and photos by Richard A. Ross

Apples and oranges are both tasty, but they are oh so different. So too are the contrasting playing styles of Monticello and Sullivan West boys basketball. The former, the victorious Panthers, used their great rebounding and speedy transition game to run by Sullivan West 63-39 in the initial varsity game of the Fred Ahart Foundations Games.

In doing so, they neutralized Sullivan West’s plan to get the game into a half-court set and deploy the 3-2 zone as they did in their narrow win over Fallsburg. Nothing doing. From the opening tip and a quick layup by game leader Pedro Rodriquez, who would go on to score 22 points with five assists, it was run, gun, jump and hustle in true Panther fashion as the Montis now look to build on two wins this week to get back on track after a less-than-stellar start to the season.

The Westies meanwhile can breathe a sigh of relief knowing that the opponents that they will face going forward will likely not deploy the race to the top evinced by the Panthers. The Montis got out to a 16-8 lead by the end of the first quarter and extended that to 35-16 at the half. With a 55-28 bulge after three quarters, Coach Chris Russo emptied his bench. Sullivan West had greater success in the final eight minutes. In addition to Rodriguez, the Panthers got 12 points from Joseph Russo and ten from Michael Mingo. Sullivan West was led by Andrew Hubert’s eight points. The Panthers improved to 4-7 and have two big road league games this week against Washingtonville and a rematch with Minisink Valley who they beat this past week. Sullivan West readies for frays with Chapel Field and Eldred.

Coach Russo expressed his joy in returning to Roscoe, the place of his coaching roots to be a part of the Fred Ahart Foundation games. “This is a special event that I’m glad we were able to be a part of. I’m glad we were able to honor Coach with a victory today. We’re playing well right now and we have been playing well. We don’t have the wins to show for it but this is a good building block moving forward.”

Sullivan West Coach John Meyer talked about Monticello’s speed and rebounding. “We let them beat us up the floor time and time again. We’ll look at the film and try to learn from it. Fortunately teams we will face don’t present the same kind of problem for us.”

Monticello improved to 4-7, while Sullivan West fell to 2-3.

Story and photos by Anthony Morgano

In the gym where Rob Gravelle celebrated his 500th game against Fred Ahart’s 1000th, the Seward Spartans battled against the Livingston Manor Wildcats. Seward’s first half scoring and fast-paced offense helped secure the 62-47 win over Livingston Manor.

Both teams did a good job of spreading the ball around and getting everyone involved. Between the two teams, 20 different players scored points in the contest.

Seward started the game on a 6-0 run, but the Wildcats clawed back, trailing 10-9 at one point before closing out the quarter down 13-9.

By halftime, Seward had extended their lead to 13, the score holding at 33-20 at the break.

The Wildcats got outscored 17-9 in the 3rd quarter, and the Spartans extended their lead to 21 as they entered the final quarter 50-29.

The two teams continued the battle in the fourth quarter, but the 21-point deficit was too much for the Wildcats to overcome.

Speaking about the game, Seward’s coach Rob Gravelle said, “We played a sloppy game, but it’s always nice to get a win on the road.”

Livingston Manor’s coach Charlie Hicks said, “We came out flat early on, but we played pretty well in the second and third quarter. We had a hard time getting out on their shooters and it cost us.”

Story and photos by Anthony Morgano

Having met on the court over the holiday break, the Downsville Eagles were eager to get another shot at the Blue Devils. This time, in the final matchup of the first annual Fred Ahart Foundation Games.

The game, like many for the Blue Devils so far this season, was not a high scoring contest. A strong defensive showing from both teams kept the score low throughout the game. Roscoe jumped out to an early 4-0 lead in the fourth before Downsville erased it and tied the game at 4. The Blue Devils scored one final basket to take a 6-4 lead into the second quarter.

With an 8-point lead going in the third quarter, the Blue Devils continued to extend their lead, finishing the quarter up 11, 30-19.

The Eagles tried to crawl back in the fourth, but Roscoe kept them at bay, and the two teams exchanged baskets until the final whistle. The final score of the game was 39-27.

Downsville’s coach Bert Reed said, “The game was a defensive battle, they contained us well and when we started to put things together it was too late.”

Mike Hill said of his team, “We played solid defense today, shots weren’t dropping, but when you play good defense you can get away with it.”