Last week's heavy deluges brought our rivers and streams up to and above flood level, and succeeded in lowering water temperatures; however, by mid-day Sunday the Beaverkill at Cooks Falls was … 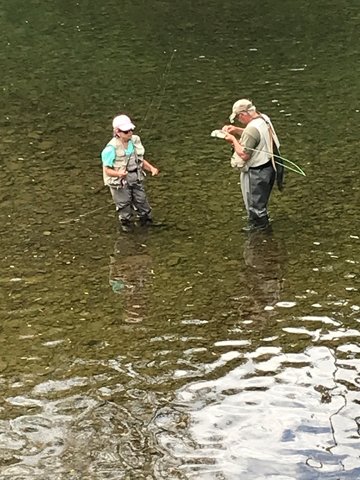 Anglers should be courteous to others and respectful of the water in which they're fishing. After catching fish, this trout fisherman is sharing a fly with another angler.
Photo by Judy Van Put
Posted Monday, August 10, 2020 12:00 am
Judy Van Put - Columnist

Last week's heavy deluges brought our rivers and streams up to and above flood level, and succeeded in lowering water temperatures; however, by mid-day Sunday the Beaverkill at Cooks Falls was flowing at a fishable 576 cubic feet per second, compared to the average flow on August 9 of 127 cfs over 107 years of record-keeping. Water temperatures remained in the 60s all week.

Recently we noticed a few youngsters out fishing in a Catch-and-Release (No-Kill) area; however, in passing by (unable to stop) it appeared as though they were using bait, which is prohibited in those stretches of the river.

Fishing regulations are posted for a reason - use of bait of any kind, whether worms or baitfish, is prohibited in Catch-and-Release areas; it is much more difficult to release a fish that has swallowed a worm or other bait. Unlike a lure or fly, which is relatively easy to dislodge, bait is swallowed and as a result the hook is too far down in the fish's stomach to remove without causing grievous harm.

Concern about anglers not following posted rules and regulations, in addition to complaints about trash along the stream and in Anglers' Parking areas, resulted in a discussion of fishing etiquette.

Here in New York State we are fortunate to have many fishing opportunities, and thanks to the diligent efforts of the Public Fishing Rights program, started back in the 1930s in our state and continued on for decades, we have many miles of fishing open to the public on all our major rivers and streams. One of the first things to remember when embarking on a fishing outing is to familiarize yourself with fishing regulations wherever you intend to fish.

The DEC publishes a Fishing Syllabus, which is available free of charge and can be carried along in your vehicle or fishing vest, and can also be accessed online via smartphone or other device at https://www.dec.ny.gov/outdoor/7917.html or by searching “NYS Fishing” online. This guide to fishing rules and regulations covers all regions of the State and is broken down by species and waterway.

Be sure to look for signage along the water as well, to determine whether the water you're fishing is Catch-and-Release, or if fish may be taken and if so, what the size/daily limit is. The Syllabus also provides locations of boat launching sites and Angler Parking Areas.

Below are a few rules of fishing etiquette:

1. Anglers should not cross private land to access public fishing, especially land that is posted against trespassing. Remember not to park in front of a gate or block a driveway or trail. Gates should be left as they are encountered - open if left opened, closed if left closed. If you are unsure if fishing is permitted in a particular area, ask before starting out. Strive to leave the area better than you found it, if you carry something in, be sure to carry it (and other litter) out.

2. The first person in a pool or run has the right to fish it. If the pool is not large and you come upon someone fishing, you might ask if they mind if you fish above or below them; or wait until they fish through the pool before entering the water. When fishing larger streams, respect the other anglers' space; don't crowd - fly fishers in particular, need adequate space for their backcast. Many anglers fish to get away from everyday activities and seek solitude in nature. Especially on a pool or run where an angler has had to walk in from a distance, do NOT pass alongside or in front of a person who is working the pool -worst of all, do NOT cast to the same fish or crowd the person who was there first.

3. As you are wading the stream, if you see someone casting to rising fish, leave the water as quietly as possible and move well up or downstream before re-entering the water. This also applies if the person is fishing from the bank. Stay far from the edge so that you don't disturb the pool, or any of the fish.

4. If you encounter an angler sitting on the bank, ask (from a distance) whether they are resting the pool or just taking a break. The angler may be waiting for a rise in a particular place; if that is the case, get out of the water and go around (as in Rule 3.)

5. Always remember that it is a privilege to fish public water, and everyone has just as much right to fish there as you. Treat others as you would like to be treated; when you encounter someone on the stream be courteous, respectful and considerate. If you are successful in catching trout and see someone who is not, you might let them know what fly you were using and share one of yours. By keeping these simple rules of fishing etiquette foremost in your mind, you will further your enjoyment and pass along an appreciation for this historic and ‘gentle' sport.