Football Co-Players of the Year

Football Co-Players of the Year 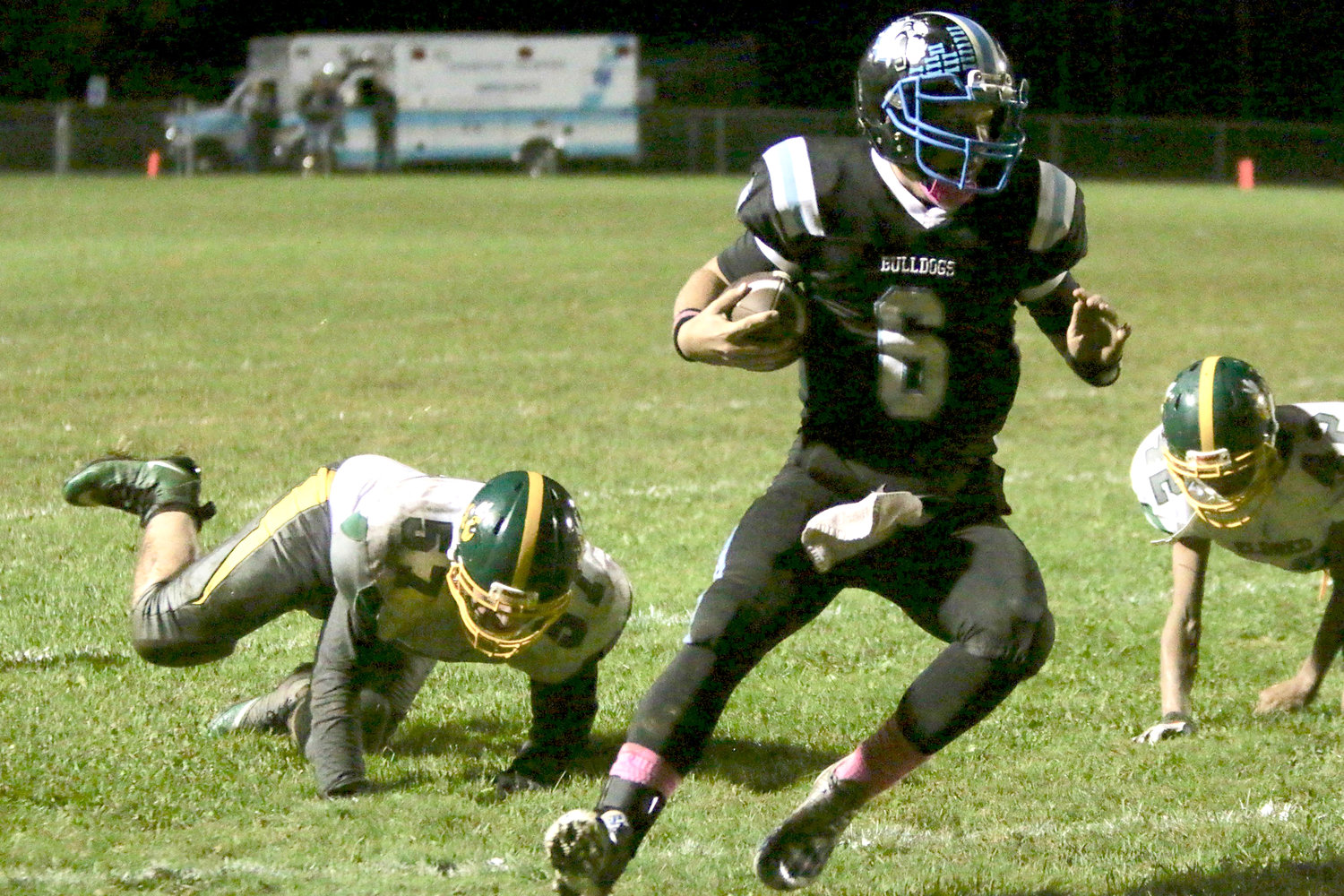 An elusive Gavin Hauschild evades Eldred would-be tacklers for a big gain in the Bulldogs’ shut out of the Yellowjackets.
Richard A. Ross | Democrat 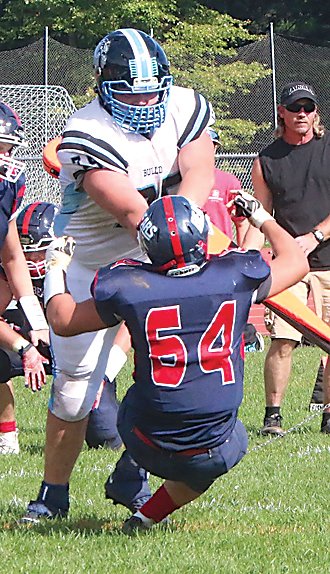 Chris Campanelli executes one of his patented 32 pancake blocks as he topples Tri-Valley’s Joseph Rodriguez in the Bulldogs’ league win over the Bears.
Richard A. Ross | Democrat
Previous Next
Posted Tuesday, December 14, 2021 6:20 am
Richard A. Ross

LAKE HUNTINGTON - The Sullivan County Democrat Football Player of the Year is normally an honor accorded to a single individual whose outstanding play contributed greatly to his team’s success throughout the football season. But, in rare instances that choice has been awarded to two players as was the case in 2015 with Liberty’s Kevin Morgans and Grant Harman for their roles in the undefeated Indians’ season. In 2019 it was Tri-Valley’s Keegan Streimer and Liberty’s Kymanni Dennis highlighting the best performances in eight man and 11-man county football respectively. This year, Sullivan West’s Division championship and Section 9 eight-man football runner up status warranted a dual choice once again, namely quarterback Gavin Hauschild and Section 9 Lineman of the Year, Chris Campanelli. While the Bulldogs’ success was a total team effort, there is no question that without either of these standouts, the Dawgs could not have gone as far as they went.

Anyone who understands football knows that games are won or lost on the line of scrimmage. While they rarely bathe in the same limelight as running backs, quarterbacks and wide receivers, lineman are critical to a team’s success on both sides of the ball. Without their blocking on offense, the ball simply could not be moved. Similarly, defensively, linemen form the leading vanguard of efforts to stop their opponents. A dominant lineman can create havoc for the opposition, which is exactly what teams had to reckon with in dealing with the likes of 6-5, 340-pound Chris Campanelli, Section IX’s Lineman of the Year. “Coaches would come up to me after games to tell me they designed their offenses to stop me.” We saw how well that went as Chris recorded an uncanny 32 pancake blocks, 18 solo tackles, 26 total tackles, had a number of sacks and recovered a fumble.

A monster on both sides of the ball, Campanelli was often the target of double or even triple teaming, mostly to little or no avail. He relished the attention. “That never stopped me. I fought through it. Actually, I was honored to be double teamed. I felt like I was more important,” he quipped.

His dad Tony bought him his first football, and for a while he played with his three older brothers Nick, Joe and Gabe until he got bigger than them, that is. “They didn’t want to play with me anymore,” he said, with that inimitable grin.

In third grade he joined the Red Dogs as a lineman where he has principally played ever since. “I’ve done everything a lineman dreams of,” he reflects on the game that he describes as being an integral part of his heart. “I love football, my family on the field and my coaches. When I’m on the field and our home fans are going crazy it sparks the life in me. Whenever I’m having a rough time I think about those times,” he said.

Off the field, with his friends or family, Chris is a teddy bear, affable and soft-spoken, but out on the field he is a one-man wrecking crew.

Offensive Coach Justin Diehl put it plainly. “We designed our plays to run behind Chris.”

That didn’t come as a surprise to the opposition. They just couldn’t stop it. His blocking, even when he wasn’t directly in front of a ball carrier, created much of the opportunity for great runs on the edge as well as those up the middle. Campanelli was a key part of the senior leadership that authored the goal of going as far as they could.

“As the practices and games went along, everyone was giving such a great effort. That showed me that we could do it.” The Division title and the playoff win over defending champion Pawling affirmed that belief. Chis recounts his most memorable moments as his 45-yard TD run following a fumble recovery in Roscoe last year. In a joyful moment he shoulder-checked Diehl who remembers that loving “nudge” as if it were yesterday.

“I also cherish my first sack as a sophomore against Fallsburg. I have that video,” he says proudly.

Playing nearly every down, Campanelli never runs out of enthusiasm, exerting that crushing force to help propel the offense, or bursting through on defense to intimidate quarterbacks or stop runners in their tracks. He already has a full ride option to play at Division II Alderson Broaddus in Phillipi, West Virginia, but he is keeping his options open, even considering enlisting in the navy with dreams of playing Navy football. His career aspirations envision a career in criminal justice. Campanelli is playing basketball this winter, and this spring he will be a thrower on the track team. All of that is part of his ongoing preparation for playing at the next level. While no player is irreplaceable, it will require several big and agile linemen stepping up big time who can hopefully compensate for the immense contribution of Chris Campanelli, by far the most dominant lineman in Sullivan West history.

That aptly describes the coming of age of Sullivan West quarterback Gavin Hauschild who grew into a major force as a quarterback and steered his team to the Division title, a cathartic playoff win over Pawling and had he not suffered a game-ending knee injury, might well have been instrumental in authoring a much closer match up with Spackenkill in the Sectional championship game.

How this success happened leading to his Co-Player of the Year status, had its roots in the offseason. “All summer, I was here every night with Coach Bauer and Coach Diehl and Justin Grund. All that offseason work really paid off this season,” he noted. In terms of his newfound confidence, Hauschild chalks it up to intention and goal setting. “I would look up at the wall in the gym and see all those banners, and I wanted to raise a piece of history that we would be a part of. I wanted that more than anything and nothing was going to stop us.”

Hauschild saw his role as quarterback as the nexus of leadership. “I’ve got a job to do to facilitate all I can to make sure that we can get it done. I’m not there for the quarterback glory, I’m just there to win,” he says.

And win he and his teammates did, with Hauschild being a very big part of the success as the Dawgs’ offense racked up 2138 yards on 340 carries for a 6.3 yards per carry average. Gavin accounted for 836 of those rushing yards on 129 carries, averaging 6.5 yards for carry and registering 13 of the team’s 33 rushing touchdowns. He passed for four more with a total of 344 yards in the air, averaging 17.3 yards per completion.

The Dawgs racked up 271 points this season while yielding 164, 52 of which came in the title game where they were missing five players and had their QB injured. To be an effective quarterback requires more than running and passing expertise, it requires instincts and the ability to adjust to changing defenses.

“It’s just something in my gut that tells me how to react instinctively. It’s like I’m not in control, those decisions just come out of me,” he notes.

Following in the footsteps and, until this year, in the shadow of his brother Collin, Gavin knew if he was given the opportunity, he could come into his own. Collin was a high school standout and former Sullivan County Democrat player of the year who realized his dream of playing college football first at Earlham College in Richmond, Indiana and then at Baldwin Wallace University in Ohio. Shoulder injuries ended his career, but not before he had performed outstandingly.

Gavin waxes poetic in crediting his family’s support and encouragement. “My dad (John Hauschild) has been there from day one right to my last game. My mom (Dawn Hauschild) has recorded every game from every sport. Everything I’ve done in life has been recorded,” he says with an engaging grin. “That means everything to me. Mom and dad go to everything.”

John was the team’s special teams coach so he was right there, while his mom was up in the stands videotaping it all. As for Collin’s influence, Gavin notes, “He was a tremendous athlete. He started my love of football dragging me out in the backyard to catch his passes. Watching him succeed and fulfill his dreams of playing college football made me believe. I told myself, if he can do it, so can I.”

For the love of the game, Gavin, like Collin before him, has accomplished what he set out to do: namely to create a piece of gridiron history and to give his all to the sport he cherishes.

“I just loved being here together with my teammates all the way through. I’ve watched them grow as players. It’s nice to see people build character from it. It’s a beautiful game and I can’t see myself giving it up any time soon.”

Fortunately, the injury he sustained in the championship game proved to be far less severe than anticipated. At present, he is on the cusp of returning to basketball and in the spring, it will be baseball. But all of that is secondary to football, his first love. Hauschild was a great fit for the offense as Offensive Coordinator Justin Diehl observed.

“He’d come off the field with an idea for a play and I would have the same one. We had great chemistry which developed over the two years I got to work with him.”

Hauschild has yet to decide where he will be next year. Massachusetts Maritime is his first choice where he hopes to play football and pursue studies in Emergency Management like his dad, who also serves as the country’s Fire Coordinator. Criminal Justice is another possible course of study. Hauschild may switch from QB to running back or slot receiver in college. It doesn’t matter to him. “I just want to be around the game.” Given his skill set, character and game savvy, count on Hauschild to not just be around the game, but to be right in the thick of it.