LAKE HUNTINGTON- “Success is peace of mind, a direct result of self-satisfaction in knowing you did your best to become the best you are capable of becoming.” 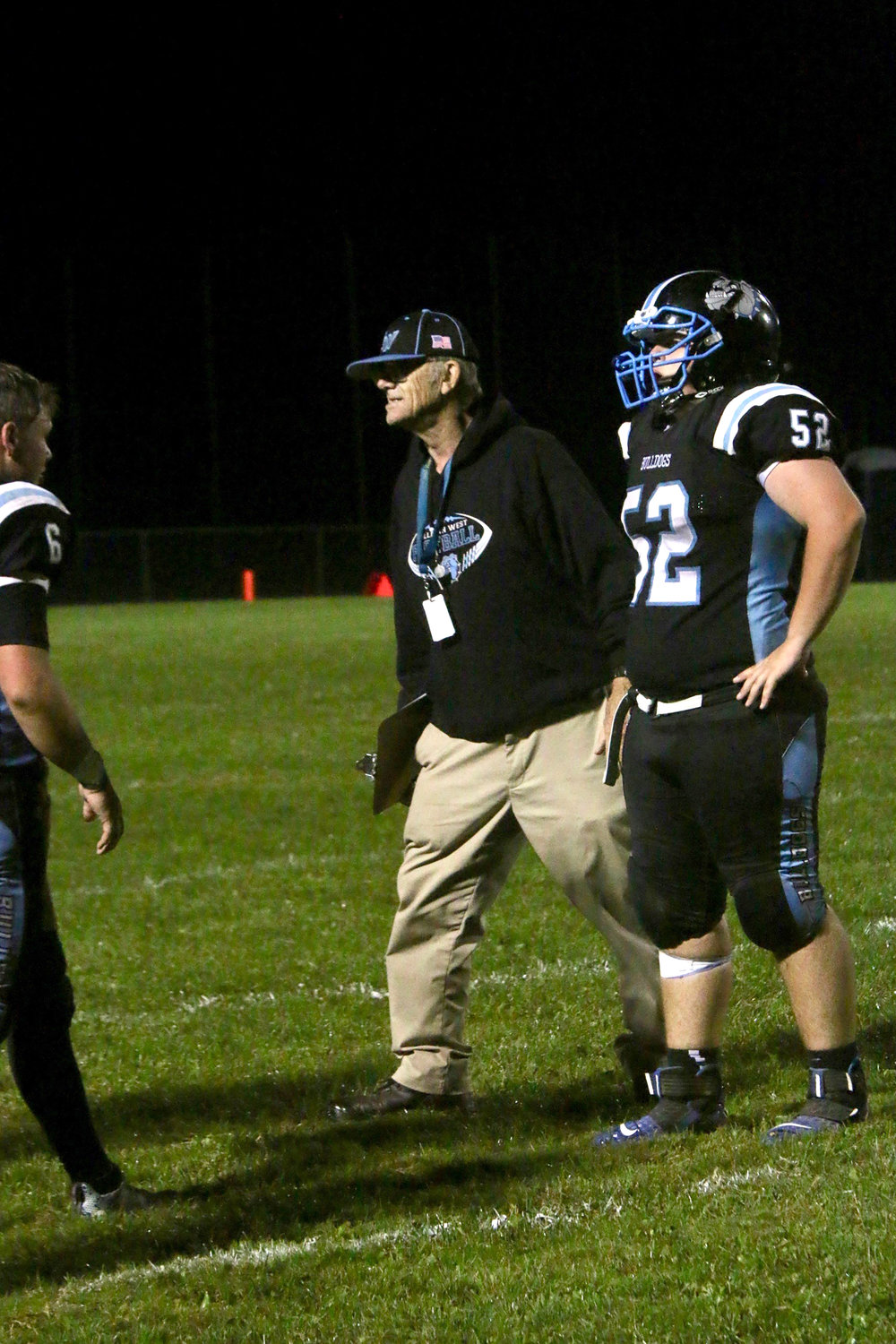 Bauer takes the opportunity of a time out to weigh in on what needs more vigilance and attention as senior center Ryan Joyce-Turner looks on.
Richard A. Ross | Democrat 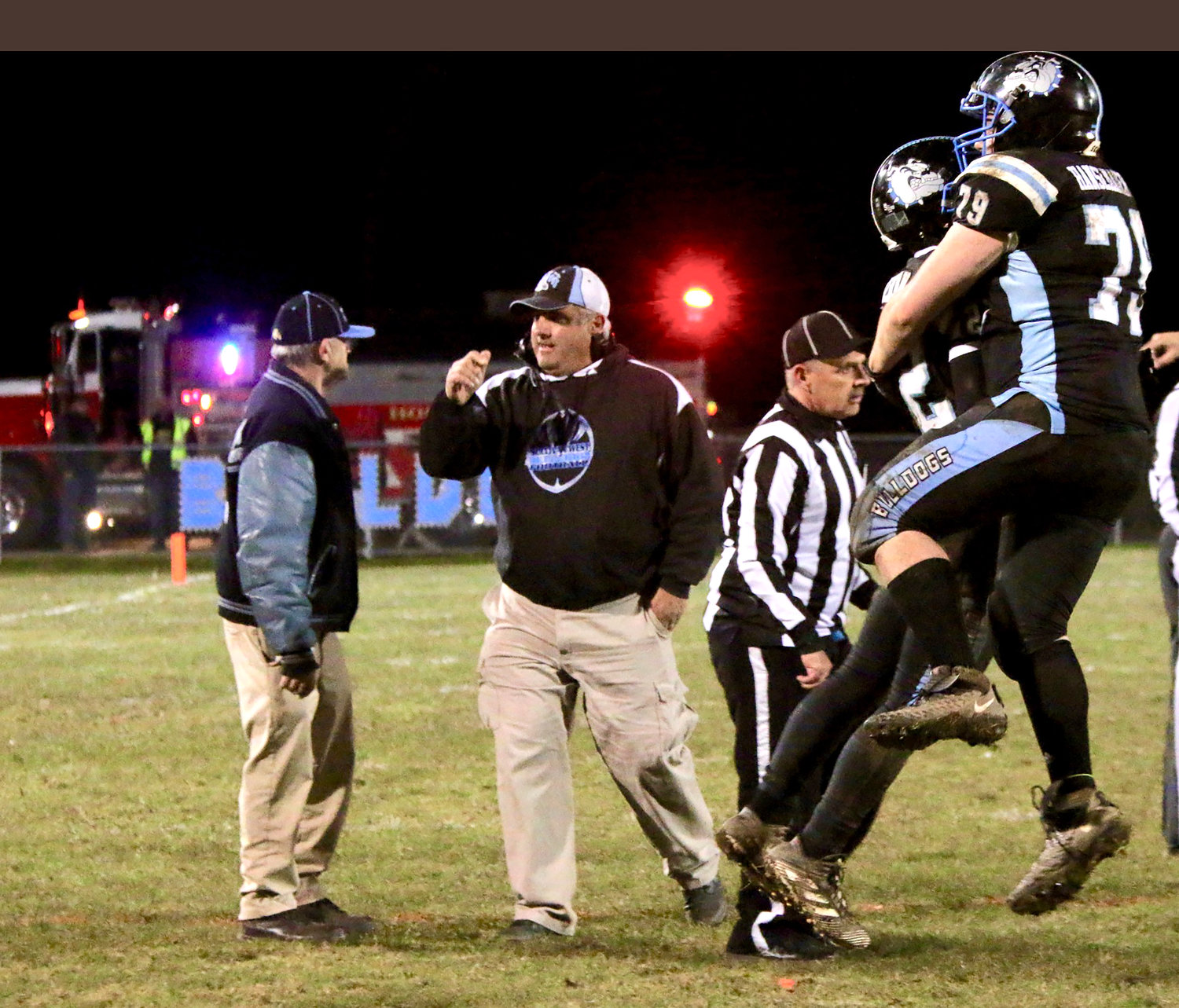 Coach Bauer talks over the win against Pawling with assistant coach John Hauschild while junior Dillian Hanselmaier leaps with joy at the outcome of the semifinal playoff tilt.
Richard A. Ross | Democrat 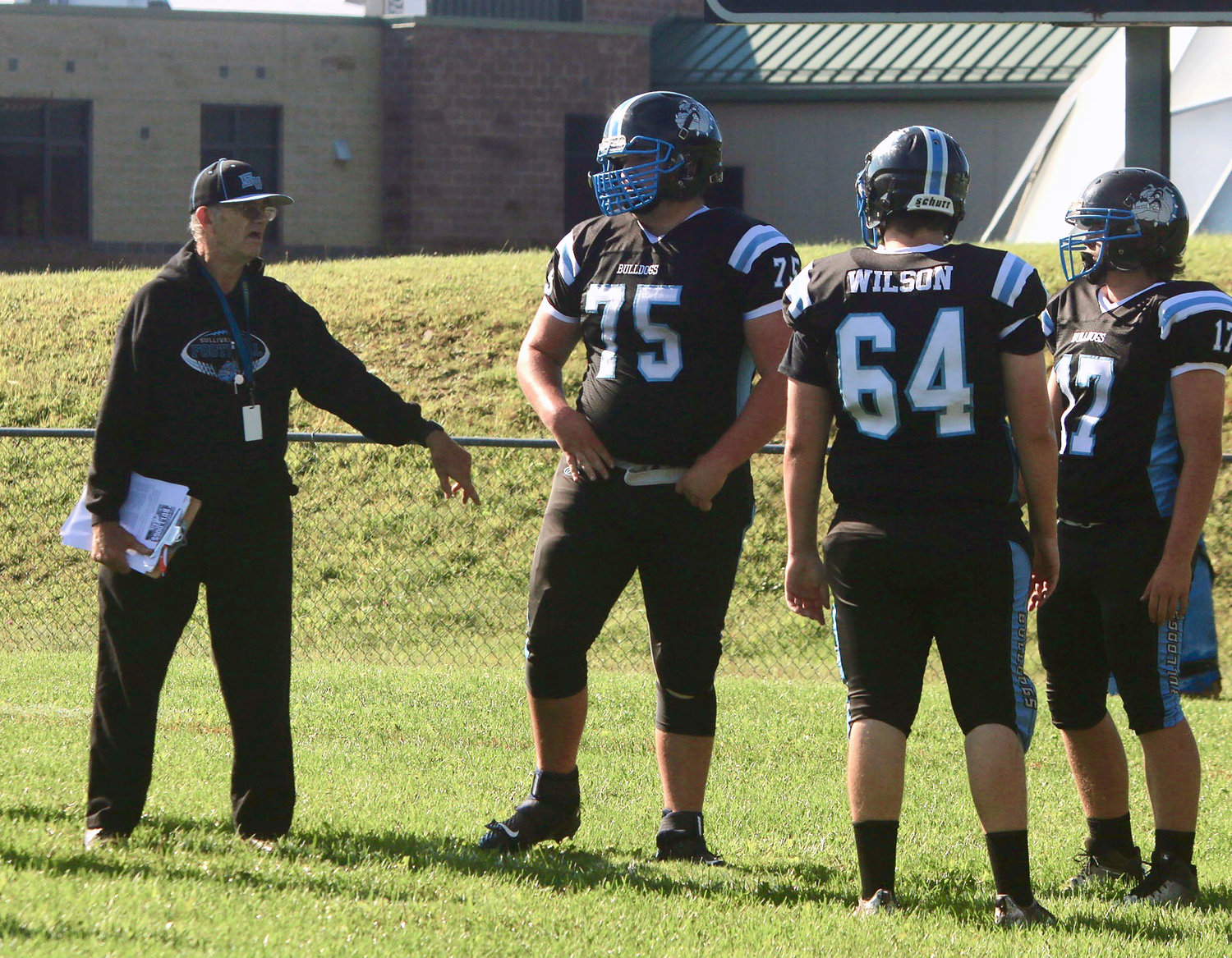 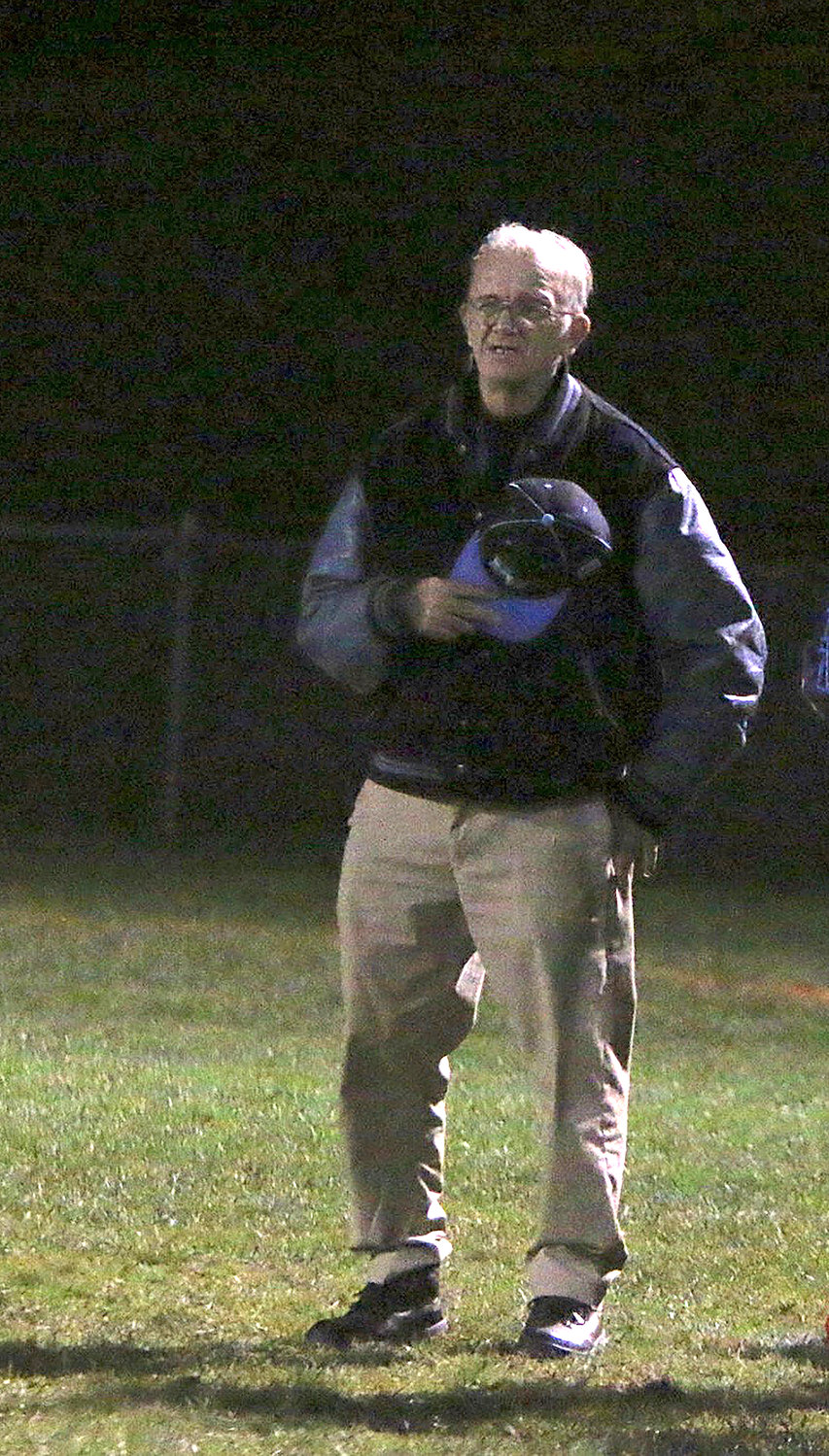 Coach Ron Bauer pauses to reflect during the National Anthem prior to a game.
Richard A. Ross | Democrat
Previous Next
Posted Friday, December 10, 2021 6:20 am
Richard A. Ross

LAKE HUNTINGTON- “Success is peace of mind, a direct result of self-satisfaction in knowing you did your best to become the best you are capable of becoming.”

Thus averred John Wooden, the legendary men’s basketball coach at UCLA who led the Bruins to ten national championships. His words apply to the outstanding success of the Sullivan West Bulldogs, led by the inspiring leadership of head coach Ron Bauer, this year’s Sullivan County Democrat Football Coach of the Year. The Division Champion 6-2 Dawgs reached the Eight-man championship game after an emblematic 42-24 semifinal win over defending champion Pawling. Bauer’s knowledge, leadership and the character building he imparted to his players led to that outcome.

For 56 years Bauer has done what his coaches taught him during his high school days at Delaware Valley and his college years at Cortland. Namely, emphasizing the fundamentals of blocking and tackling, the dynamics of teamwork, the requisite strength and conditioning and most importantly, the need for perseverance in the face of adversity. To Bauer, football is preparation for life’s challenges, a lesson he continues to impart to his players year after year.

This fall was a renaissance of the Sullivan West football program which has had its struggles in recent years. Bauer is quick to deflect credit to his fine coaching staff including offensive coordinator Justin Diehl, special teams coordinator John Hauschild, defensive coach and wide receiver guru Ronj Padu and the highly motivational input of assistant coach Shane Cruz. Beginning with the abbreviated football season last spring and on through a summer with its seven-on-seven encounters and an instructional day at Cortland, the team came together with great chemistry and a unity of purpose. The seniors showed their leadership and helped the team define its goals. “We met all the goals we set out to achieve except of course winning the section,” said Bauer. “We had tremendous support this year from the community.”

Coaches rarely enjoy universal approval, even during their most successful runs. And there are some naysayers who have asserted that Bauer is “old school,” that the game has changed and requires someone who can more readily adapt to its recent nuances. The success of this season and the respect and affection his players and coaches have for him clearly refutes that assertion. Bauer’s coaching style that has made him the third winningest coach in Section IX history, compiling 182 wins, behind the retired Joe Viglione (194) of Warwick and Port Jervis and retiree Pat D’Aliso (216) of Monroe-Woodbury.

Bauer guided teams to 11 sectional championships over the course of his career at Delaware Valley, Jeff-Youngsville and Sullivan West, along with 18 division titles. He is a stalwart leader who has earned Section IX Coach of the Year honors in Class B, C, and D. During his heyday at Delaware Valley, the Eagles won eight straight Section IX titles and produced two NYS Players of the Year in Matt Buddenhagen and Fred Ruillano. The latter holds ten NYS records.

After the uplifting season-opening 26-22 win over Spackenkill, the team blitzed by Tri-Valley, Eldred and Fallsburg before losing to Ellenville in a game that defined the kind of character Wooden would have lauded. The team roared back from a 28-0 halftime deficit to tie the game with minutes to go. Ellenville won the game in the final minutes, but the team’s resiliency only strengthened its belief in itself and its resolve. That fueled the victory over Pawling. Missing five players and having quarterback Gavin Hauschild injured factored strongly into the loss to Spackenkill in the Sectional Championship. Bauer put that in perspective for his young charges who after the bitterness of the defeat had worn off, came to embrace the success they had achieved and the strength they garnered from the experience of playing football under Bauer and his staff. That experience is bound to have a long shelf life both for the seniors who are graduating and the returning players who will hope to reignite the success they were a part of this year. Each of his assistants weighed in on Bauer being named Football Coach of the Year:

John Hauschild, Special Teams Coordinator: “Coach Bauer has been a legacy coach in the football program from the old WSL (Western Sullivan League) to the current league. Having Coach Bauer as one of my coaches when I played, you could tell he knew the game and was always there for the players. As years went by I started coaching for the Red Dog youth football program in which Coach Bauer would come to Fremont Center on Sundays to watch the games and players to see who he would have moving up the following year on the Modified team. When I started coaching Modified football, Coach Bauer would give me plays and skills to prep the players for the next level. I recently had the honor and privilege to be one of Coach Bauer’s assistant coaches for the varsity football team. There I could really see the dedication and the time he puts into the football program. Coach doesn’t just start coaching in August. He starts the minute the season is over. He talks to kids about the game, camps, seven on seven and personal workouts. Coach Bauer is a unique person who is there for the kids not just for the sport. If a player needs something and he can’t afford it, he takes care of it. Coach Bauer is well deserving of the Coach of the Year honor. And again, it’s been my honor to have played and coached with him. Coach Bauer is Mr. Football.”

Ronj Padu, Defensive Coach and Wide Receiver Coordinator: “Ron is the engine of the program. He has so much dedication and passion for the game and that trickles down to us as his assistant coaches and to the players. When Ron coached me, he brought out a side of me I didn’t know I had. He pushed me and made me be a better player and young man.”

Justin Diehl, Offensive Coordinator: “I’ve never met a more dedicated man to football. He truly loves the game and is one of the most competitive people I know. He really does put every ounce of his soul into the team and he’d give any of his players the shirt off his back if they asked for it. Having the opportunity to both play for and coach with Ron has really shaped me as a play caller and coach. As a young coach it’s amazing to have a head coach with so much experience. He’s been a great resource for me on and off the field. He has kept this program going when things looked bad and he takes a lot of pride in what he does. I can’t think of anyone more deserving of being named Coach of the Year.

Shane Cruz, Assistant Coach: “Ron has selflessly guided generations of local athletes through the very emotional experience of sports. Having played for Ron more than 20 years ago as a Delaware Valley Eagle and also having coached alongside of him, I can attest that his passion has not wavered, and he cares strongly for his athletes both on and off the field.”