From the classroom to the stream

With the chilly nights we've experienced this past week there is no doubt it's the changing of the seasons - the official end of summer and beginning of autumn. And with it brings better fishing, …

From the classroom to the stream 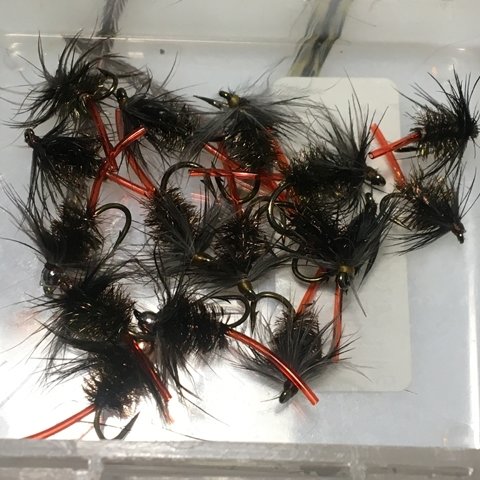 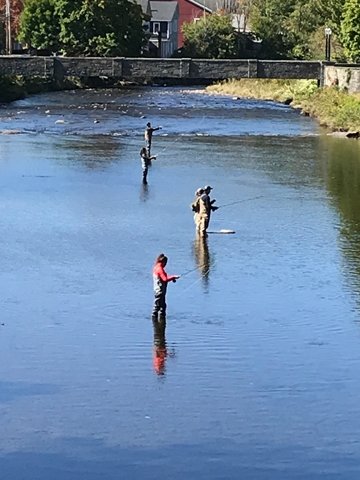 With the chilly nights we've experienced this past week there is no doubt it's the changing of the seasons - the official end of summer and beginning of autumn. And with it brings better fishing, thanks to the cooler days and nights and favorable water temperatures.

On Saturday morning we drove over the Willowemoc and noticed a group of five fly-fishers lined up in the river. It was a picturesque sight, with the stately Georgian architecture of the Livingston Manor school as a backdrop, framed by just-turning autumn leaves. I jumped out of the truck to capture a photo and hailed the woman who appeared to be instructing the anglers. It was Jennifer Kakusian, a licensed fishing guide, whom we had met about five years ago when we gave a presentation at her Trout Unlimited Chapter in Binghamton.

Jennifer was enthused at the chance meeting and confirmed that she was indeed guiding the four fly-fishers. She was working in conjunction with Dette Flies, formerly of Roscoe but now located at Waterwheel Junction, just across the street from the Willowemoc, in the heart of Livingston Manor. Dette Flies, originally established by Walt and Winnie Dette in 1928, is now managed by Joe Fox, great-grandson of Walt and Winnie, along with his partner Kelly Buchta. It's the perfect location for fly-fishers, so close to the blue-ribbon trout stream that you can look out the windows and observe what's hatching and watch for trout rising.

Intrigued that she was a fishing guide, I asked how Jennifer happened to get into that profession. Relating that she grew up in Binghamton and had fished with her father since she was a child of eight, Jennifer has enjoyed fly-fishing for more than forty years. Her father had fished the nearby West and East Branches of the Delaware river, but he loved fishing the Beaverkill and Willowemoc best- which Jennifer confesses have always been her favorites as well.

She began working part-time as a licensed guide with a couple of outfitters. She recalled how her father, now passed away, had noticed that the West Branch fishery had changed through the years, and the commercialism concerned him. Jennifer observed the same dilemma, explaining that while there were a number of outfitters on that stream, she noticed that no one cared about the stream enough to pick up a piece or trash, or plant a tree, or perform any conservation efforts to protect the river and its fishery. But Kelly and Joe Fox of Dette Flies, whom she'd known for years, were different - they did care, and they promoted learning about the sport, conservation, and care of our Catskill streams. One day “out of the blue” Joe called her to ask if she was guiding, and whether she would consider traveling the distance from Binghamton to Livingston Manor to his shop, Dette Flies, to work as one of their guides. She jumped at the opportunity, responded “Absolutely!” and said that she would be happy to work with them; and has been guiding for Dette Flies ever since.

Jennifer was by profession a teacher, having taught Math for 20 years, and then became a fishing guide. She does more than just provide anglers instruction on where to fish; she loves giving how-to fishing lessons, and especially teaching children and being responsible for getting them involved in a life-long sport. She's grateful to Joe and Kelly for giving her the opportunity to guide and teach fishing on the rivers she loves most. She not only teaches fly fishing techniques and how and where to cast, but gives lessons on stream etiquette, conservation, and how to handle and care for the trout. One of her favorite guiding experiences occurred this year:

A father brought in two young boys for a fishing lesson and explained that although he is a deep-sea fisherman, the boys showed only a lukewarm interest at best, and he really wanted to get them involved in fly-fishing. Jennifer noticed that the boys were not enthused, and declared that she was going to give a tough-love session, treating these children as if they were her own. She gave each one flies she had tied to use, and put the extras in their hats. It was a long four-hour session, but the boys were successful - each catching fish, and the older brother, who was celebrating his 13th birthday, managed to catch 13 trout! It was an amazing feat for two young boys who hadn't experienced fly-fishing before, to catch so many fish on their first time out on the stream! And it was a birthday he'll long remember - catching 13 trout on his 13th birthday.

The next day she was in the Dette Flies parking lot, preparing to give another fishing lesson, when she heard her name being called. It was the boys from the day before, who came up and hugged her, and proudly showed her the new fishing outfits, including hats, that their father had purchased for them. Jennifer was touched, saying that it was ‘pure joy' and that it made her heart happy to see that she had passed along a skill that these boys could enjoy for the rest of their lives - and that they were now hooked on fly-fishing!