LAKE HUNTINGTON – After leading Sullivan West to an undefeated 12-0 golf season, qualifying for sectionals, and from there, earning a trip to states, Gabby Cohen has been nothing short of … 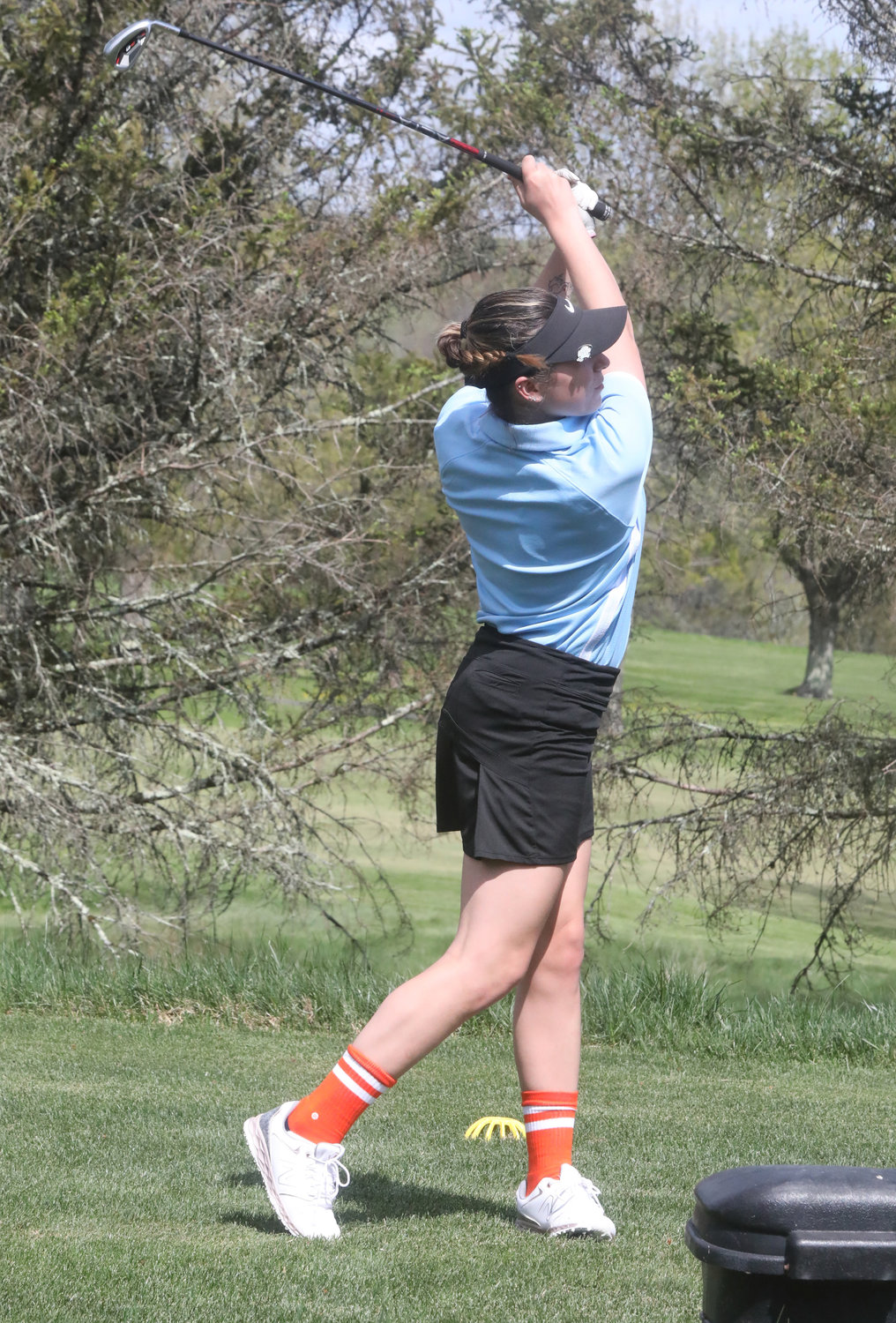 Gabby Cohen is the Spring 2022 MVP after having a phenomenal season, going 12-0 as a team for Sullivan West and eventually earning a trip to the state tournament.
Richard A. Ross | Democrat 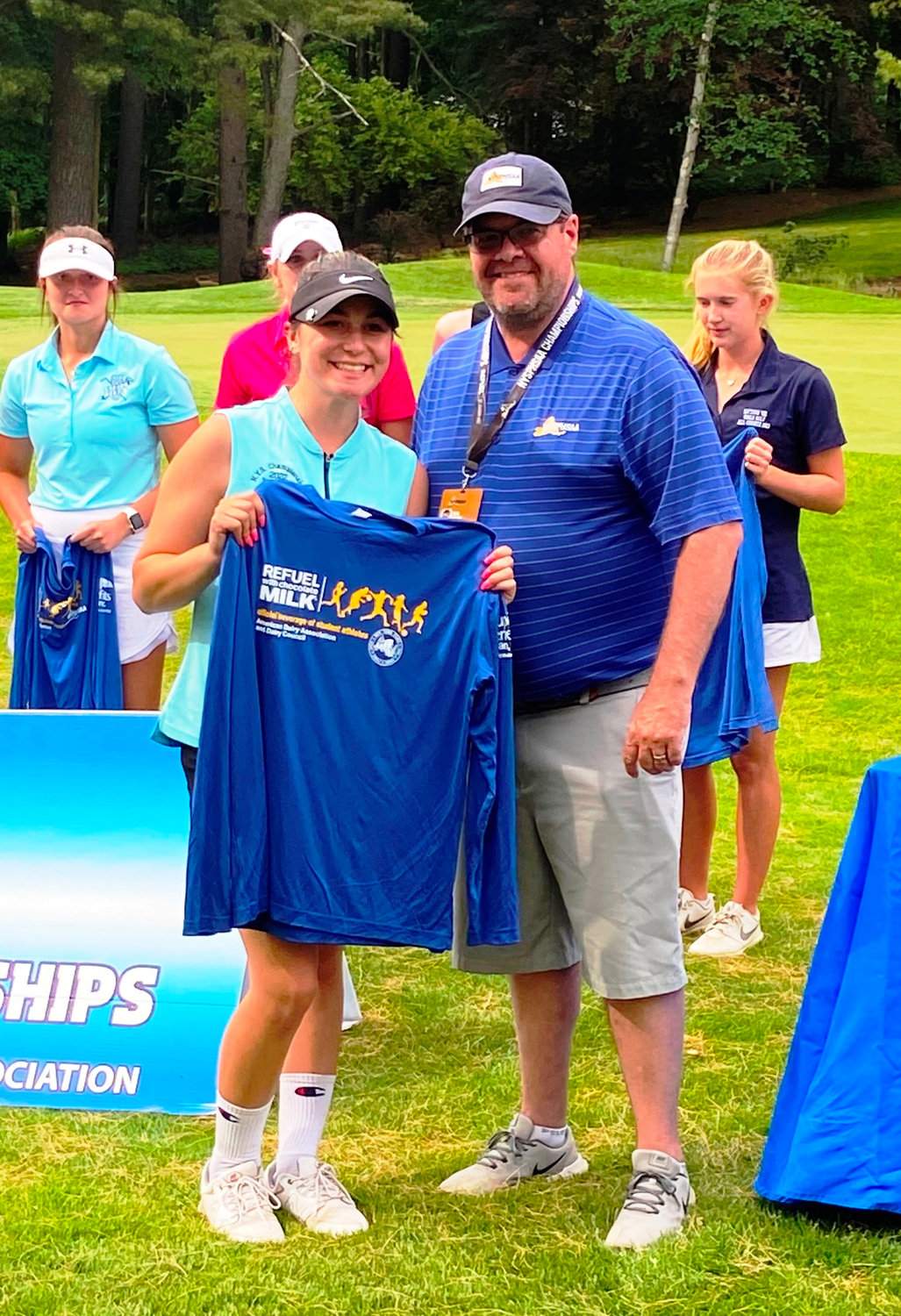 Gabby was recognized during Sullivan West’s spring sports awards for her exploits on the golf course. She will be closing the book on high school and starting a new one at Kutztown University in the fall.
Richard A. Ross | Democrat
Previous Next
Posted Tuesday, June 21, 2022 6:20 am
Anthony Morgano

LAKE HUNTINGTON – After leading Sullivan West to an undefeated 12-0 golf season, qualifying for sectionals, and from there, earning a trip to states, Gabby Cohen has been nothing short of sensational in her senior year. Because of her hard work on and off the course, and the success she has found through her love of golf, Gabby has been selected as the Sullivan County Democrat MVP for the spring season.

Gabby was introduced to the sport of golf at a young age by driving the cart for her father, Ken, before picking up the sport herself around the age of 10. “When I was five, I hated golf,” Gabby remembered. “I would go with my dad because I loved driving the golf cart, but when I got a little older I fell in love with the game.”

Gabby explained that golfing became something of an addiction, and she started taking lessons and going to camps to improve her skills. “It’s a frustrating sport, but it’s also very rewarding, and it has taught me a lot about being patient.”

Arnold Palmer, one of the greatest to ever play the game of golf, shared a similar sentiment about patience on the course. “Success in this game depends less on strength of body than strength of mind and character.”

Gabby, who will be headed to Kutztown University in the fall and playing for the golf team, finished fourth in the Section IX golf tournament. Gabby and Tri-Valley’s Kaylee Poppo were the two Sullivan County golfers to qualify for the state championship.

The team earned a trip to the Section IX tournament as a team but due to an illness to a player did not have enough golfers to qualify, so Gabby went alone to represent Sullivan West at Apple Greens.

“It was a good season. A few of my friends that have never played before joined this year, so I got to help them learn and grow while working on my game,” Gabby explained.

It was Gabby’s 5th varsity golf season, having played since 7th grade, and missing a season during the Covid-19 year. Her familiarity with Apple Greens, the home of the Section IX tournament, paid off with her highest finish at Sectionals.

“The state tournament was something I wasn’t used to,” Gabby admitted. “It took 7 hours to play 18 holes, then another 7 hours the next day as well.”

Gabby is well-versed and educated with the different features of the course and how to play different holes. In the state tournament, the course was a bit longer than her typical course, measuring at 5,800 yards.

“The pin placement was difficult on the second day, and the greens were playing fast.”

While Gabby didn’t finish as high up as she would have liked, she was grateful for the experience.

“I got to meet and golf with a lot of great girls, and I had a great time.”

Gabby emphasized how difficult and frustrating the game of golf can be. To her current teammates, as well as anybody that might be interested in trying out golf, she passed along the lesson, “Stay patient and stick with it. It’s important to take a step back The sport is very mentally exhausting, and it isn’t always easy to stay focused, but when you make a good shot there’s no better feeling.”

Coach Pat Donovan, who has helped impart knowledge on Gabby since 7th grade, is one of the people she’ll miss most as she transitions to college.

“He is like my psychologist,” Gabby explained. “It has been quite the journey, and I’m going to miss my friends, family and everyone who has supported me through the years.”

Coach Donovan had high praise for Ms. Cohen as well.

“Gabby is an outstanding young lady,” he said. “She received the Section IX Sportsmanship Award that was voted on by the coaches of Section IX. That shows what type of kid she is.”

“Although Gabby is a good golfer, as she will be playing at Kutztown University in the fall, Gabby is an even better young lady. Her smile and outstanding personality are infectious and that becomes contagious to those around her. She surely will be missed, not only on the golf course, but in the classrooms and hallways here at Sullivan West as well.”

One of Gabby’s biggest inspirations for starting this “golf addiction” as she refers to it, is her father Ken. The two of them have spent countless hours on the course together, dating back to her driving the cart before she had any intention of playing.

In fact, before Gabby’s best round of the season, an even 35 at the Villa Roma, she and her father made a bet that if she shot a 35 then Ken would get a tattoo: A pink golf ball with “Gabby 35” inscribed. Pink because it is the only color that she plays with.

“After she made a four-foot birdie putt on the ninth hole to shoot the 35, I gave her a big hug and she immediately reminded me of the tattoo deal,” Ken explained. “It was very exciting to see her hit such a beautiful shot into the ninth hole and then sink the putt, even knowing what was on the line.”

Aside from that moment from this past season, golf has always been a big part of Gabby and Ken’s family time together.

“She has come such a long way with her attitude and willingness to learn the game and enjoy it for what it is, a sport. Even though she has had some significant accomplishments this year, I think we are most proud of the Section IX Sportmanship award she received. It is truly an indication of her maturing as a golfer and a person.”

Gabby works in the Pro Shop at the Villa and gets in rounds of golf whenever she can. As she prepares for the next stage of her life, she is sure to have plenty of people in her life cheering her on and supporting her.

Hard working, patient and polite, among other traits, has contributed to Gabby’s success at the high school level, and will no doubt serve her as she makes the next step to play at college. Her contributions to Sullivan West’s golf team through the years, and her individual talent, combined with her drive to make everyone around her better is what makes her deserving of the Sullivan County Democrat Spring 2022 MVP Award.