On August 11, 1779, at the height of America’s war for independence, General John Sullivan arrived at Tioga Point in upstate New York with a large force of men and began construction of what … 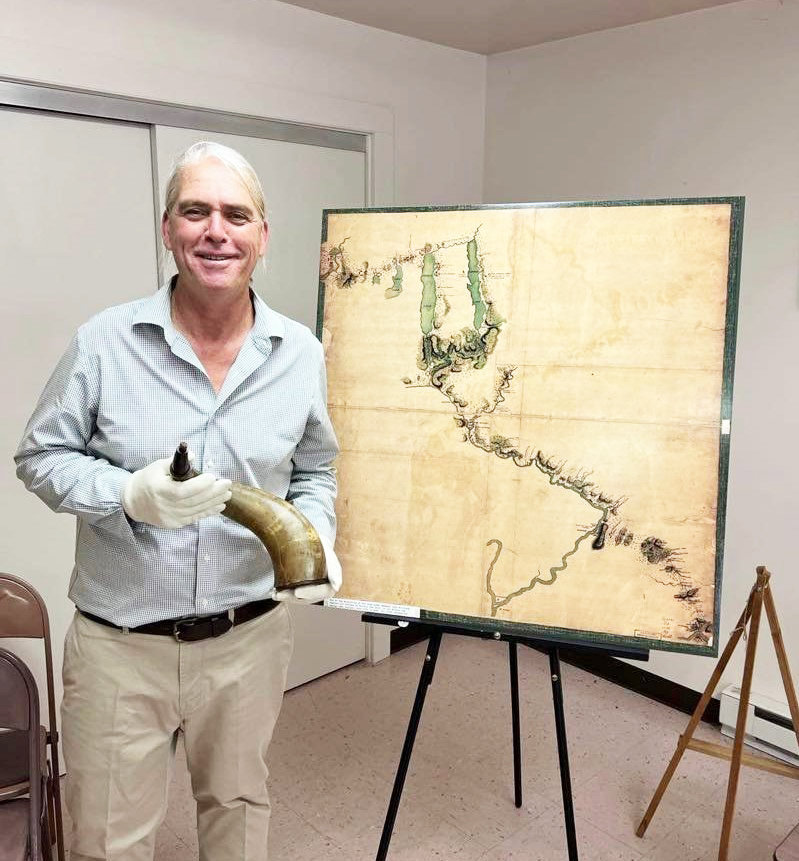 Richard Jenkins will be displaying and talking about this powder horn from the Sullivan-Clinton Campaign at Fort Delaware at one p.m. tomorrow, Saturday, August 13.
Contributed photo
Posted Friday, August 12, 2022 7:00 am
John Conway

On August 11, 1779, at the height of America’s war for independence, General John Sullivan arrived at Tioga Point in upstate New York with a large force of men and began construction of what would become known as Fort Sullivan.

The men had marched some eighty miles to get to Tioga, where they expected to rendezvous with a brigade under the command of General James Clinton. The marching army, including 1200 pack horses, had stretched for six miles long along a narrow old Indian trail, with 700 beef cattle bringing up the rear. Once they reached the Susquehanna, they met up with their artillery and supplies, which had been loaded into 214 boats and poled upstream.

Once Clinton and his men arrived at Fort Sullivan about two weeks later, the force, now comprising nearly 5,000 men under Sullivan’s overall command, embarked on an expedition to drive the Iroquois and the British Tories they had been sheltering out of New York, destroying everything in their path. The so-called Sullivan-Clinton Campaign resulted from direct orders from George Washington himself.

Washington had concluded that such action was necessary in order to once and for all put an end to the raids by the Iroquois and Tories on the settlements on the frontier, including those in Orange and Ulster Counties.

“The expedition you are appointed to command is directed against the hostile tribes of the Six Nations of Indians, with their associates and adherents,” Washington wrote to Sullivan. “The immediate objects are the total destruction and devastation of their settlements and the capture of as many prisoners of every age and sex as possible. It will be essential to ruin their crops now in the ground and preventing their planting more… [The Indian country] is not merely to be overrun, but destroyed.”

What followed was a six-week long expedition that destroyed some 40 Iroquois towns, 160,000 bushels of corn, several apple orchards, and an immeasurable amount of growing crops. By most accounts, General Sullivan’s undertaking was a success and achieved its desired outcome, but Congress was not impressed. For not the first time, they demanded that Sullivan appear before them to explain his actions. This time, he declined, and resigned his commission instead.

The ambivalence of Congress notwithstanding, many military historians have praised the Sullivan-Clinton Campaign for its effectiveness and its impact on the war.

“Military events should endure in history on account of their strategic value, their scope and magnitude, or the valor displayed by those engaged,” wrote Dr. Arthur Woodward Booth in 1929, on the 150th anniversary of the Campaign. “Measured by any or all of these standards, the Sullivan-Clinton Campaign against the Iroquois in 1779 deserves far greater emphasis in the annals of our Revolutionary period than writers on American history have ever accorded it.

“Not the least important result of this campaign was that Sullivan had rendered useless and impracticable a very natural and easy path of approach to the colonies from Canada should such an invasion, once interrupted at Saratoga, be attempted again.”

It must be noted that the Sullivan-Clinton Campaign was an ambitious strategy that, in Dr. Booth’s words, encompassed “nearly all that territory now embraced by the states of Pennsylvania and New York, which at that time was unmapped and practically without roads, other than the narrow Indian trails.”

The lack of accurate maps made it essential that Sullivan be led by expert guides with detailed knowledge of the country the army would traverse, and Lt. John Jenkins of the 24th Connecticut Regiment was Sullivan’s guide throughout the campaign. Lt. Jenkins kept a rather unique record of the expedition, etching the route of the journey and some of the highlights of the battles fought onto the surface of a powder horn he carried.

The powder horn has recently come back into the possession of Lt. Jenkins’ family, and tomorrow, Saturday, August 13, Richard Jenkins, one of the Lieutenant’s descendants, will display the artifact and tell the story of its significance and provenance at the Fort Delaware Museum of Colonial History in Narrowsburg. The program starts at one p.m. and is included in the price of admission to the fort. In addition, re-enactors from the 24th Connecticut will be encamped at the Fort all weekend.

Fort Delaware is located on the Upper Delaware Scenic Byway at 6615 Route 97 in Narrowsburg. It is owned by Sullivan County operated by the non-profit history education group, The Delaware Company.

John Conway is the Sullivan County Historian and a founder and president of The Delaware Company. Email him at jconway52@hotmail.com.

Splendid and miraculously at Fort Delaware

Success is a traffic jam