Hail to the chief

LIBERTY –– The title of Thomas Wolfe’s novel, “You Can Never Go Home Again,” implies that what one remembers about a place can never be reexperienced in the same …

Hail to the chief 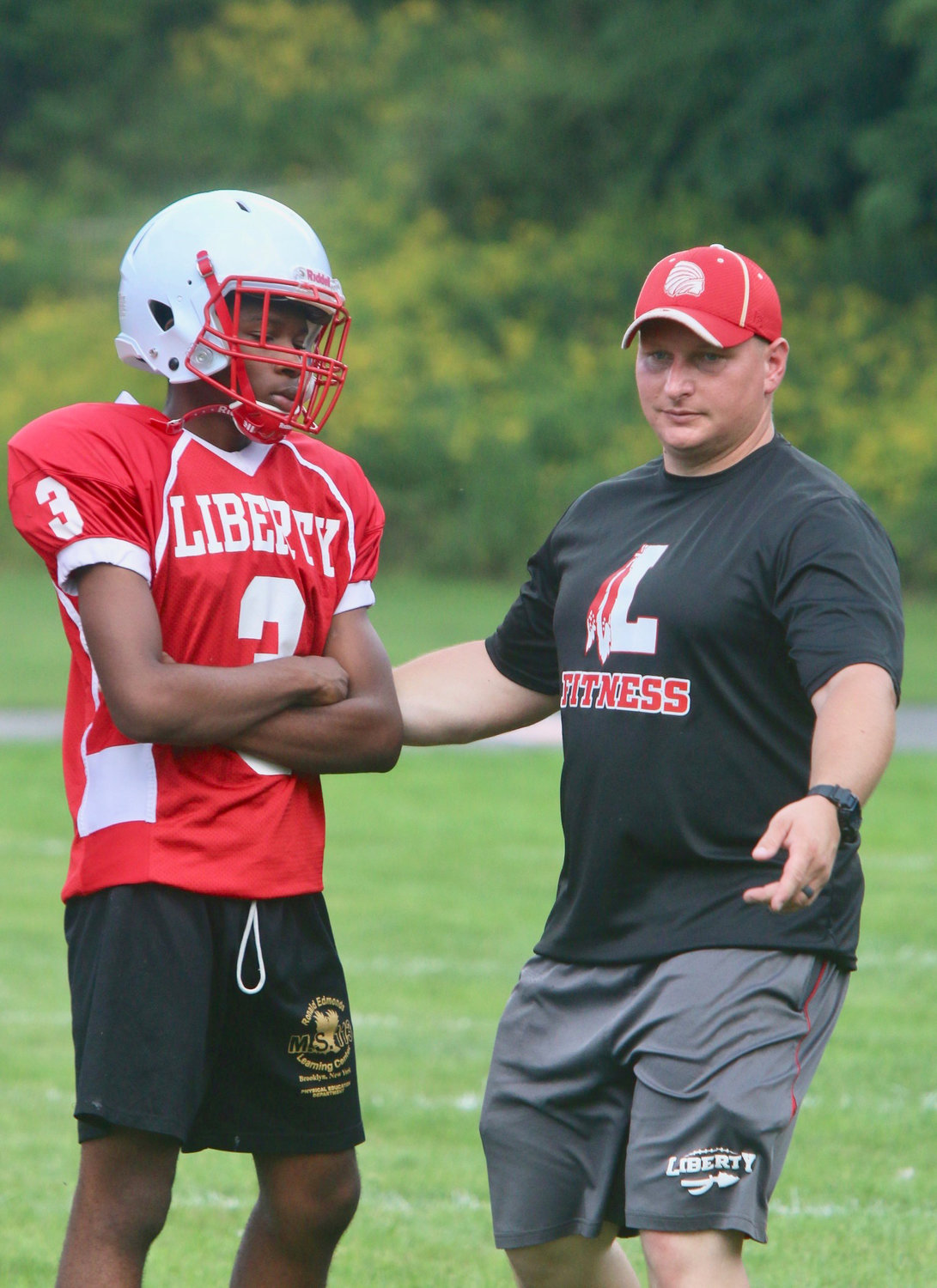 Liberty head football coach counsels junior running back/cornerback Giovanni Dudley on a kickoff drill. A clap of thunder mandated a quick exit from the field but when the skies cleared the Indians were right back at it. Look for a resurgence of Liberty Indians football under the tutelage of newly appointed head football coach Adam Lake.
Richard Ross | Democrat
Posted Tuesday, August 31, 2021 7:00 am
Richard Ross

LIBERTY –– The title of Thomas Wolfe’s novel, “You Can Never Go Home Again,” implies that what one remembers about a place can never be reexperienced in the same way upon revisiting it. Times change, people come and go and places we once knew don’t seem quite the same. But what if you never really left? What if you’ve been a part of that place for all your life, enmeshed in its activity, personality and culture

For Adam Lake, Liberty’s new head football coach, Liberty is just such a place. Born in Liberty, schooled in Liberty, an athlete in Liberty, a member of the Liberty Police Department and a part of Liberty’s football coaching staff since 2009, Lake embodies the best of what the school and community have offered him and for which he expresses his unbridled gratitude.

All of his commitment that has included work at Liberty Parks and Recreation, becoming the school’s Student Resource Officer (SRO) and his dedication to the progress and well-being of the entire student body, not just the athletes he coaches, has propelled him up the coaching ladder.

Liberty athletics, principally football, is home to Lake, a home he was reared in under the watchful and savvy eyes of former coaches including John Wilhelm, Matthew Stoddard and Ryan Boldock. In short, he learned from the best. Lake graduated from Liberty High School in 2001, a period of time marked by his participation in three sports every year that would include soccer, basketball and baseball and a year in football as a punter and cornerback.

It was there that the imprint of “Liberty Pride,” a phrase that became a byword under former Athletic Director Jason Semo became imprinted in Lake’s psyche. Semo would later give Lake his first chance at coaching at Liberty, but Lake’s involvement with sports was a consistent thread in his schooling prior to that. He earned an Associates Degree in recreational leadership and Sports Management at SUNY Sullivan in May of 2003. Then it was on to SUNY Cortland where he earned a B.S. degree in Sports Management.

In 2008, Chris DePew, who was then the head men’s basketball coach and is still Director of Athletics at SUNY Sullivan to this day, offered Lake a position as Coordinator of the Field House operations and intramurals in 2006.

While at Sullivan, Lake officially broke into his coaching career as an assistant baseball coach. In August 2008, Lake moved on to Liberty Parks and Recreation and became the assistant recreation director in charge of the summer camp and the Pee Wee football program. This year’s senior class is made up of athletes who Lake coached as Pee Wee players back in 2009. That year Lake began his coaching career at Liberty as varsity football special teams coach. Lake also coached Junior Varsity baseball at Liberty from 2009-2017.

From 2018-19 he served as defensive coach for the football team, and this year, Lake not only serves as head coach, but also as the offensive coordinator.

Since 2014, Lake has been an integral member of Liberty’s law enforcement and has served as the school’s SRO since 2018.

“I have my own office and monitor students in the hallway. I can stay on top of any problems that arise. Teachers are great communicating any issues in advance pertaining to academics that if not addressed might render players ineligible,” he adds.

Lake brings a richness comprised of skills, temperament and great coaching influences to bear as he works to resurrect Liberty’s football program that struggled to an 0-4 record in the abbreviated spring season.

His goals include reviving interest in the sport to attract more players. The agenda is to foster steady improvement and build for the future. But accruing wins along the way and perhaps making Sectionals will be goals to strive for this season. Liberty’s stellar football history is well-known. Most notably in recent years was the undefeated Section 9 championship run in 2015.

Lake coached players who have now rejoined the team as assistant coaches including such legends as Marshon Williams and Eddie Soto. Lake also coached former head coach Joe Franke the same year as the other two icons.

Franke whose first love is baseball has decided to continue to coach that sport. Balancing family life and coaching can be difficult at times but for Adam and his wife Eveliese (Adam and Eve) along with their three children Corinne (age 9), Camden (age 6) and Catalina (age 3), football is often a family affair.

Lake is thankful for the opportunity and expresses his gratitude to the Board of Education, Athletic Director Peter Bianco as well as those who along the way have supported his efforts.

Lake’s first game as the head coach is this Saturday when Liberty hosts Highland.