LAKE HUNTINGTON - If one were to read the last page of a novel or come in for the final scene of a movie, they could never appreciate all that led up to those endings. The same holds true when people … 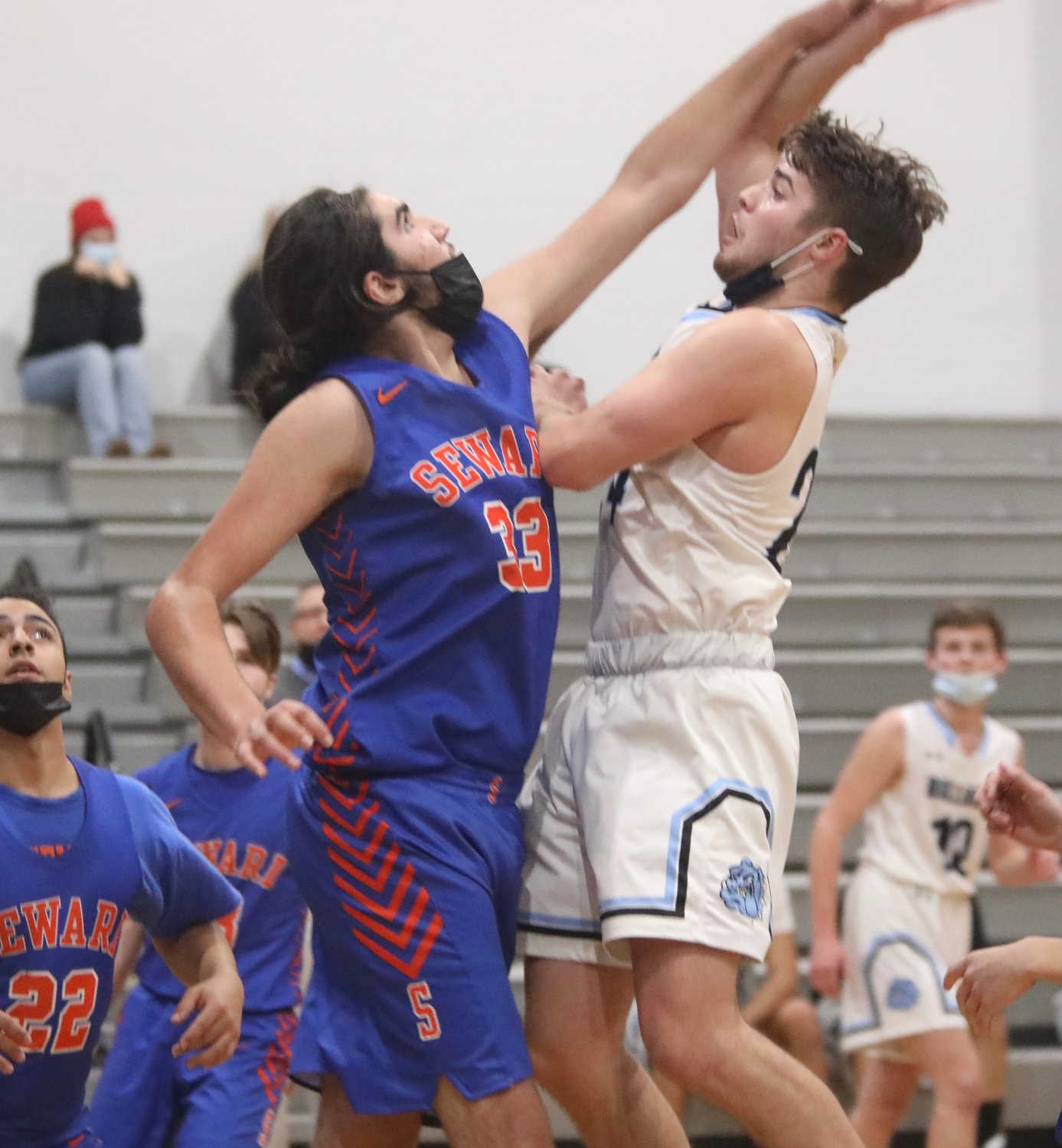 SW’s Dylan Sager came up big in the fourth quarter scoring all 12 of his points. Here he rises up and draws a foul from Seward’s Cole Buchalski.
Richard A. Ross | Democrat
https://alpha.creativecirclecdn.com/scdemocrat/original/20220203-141957-IMG_4131.jpg 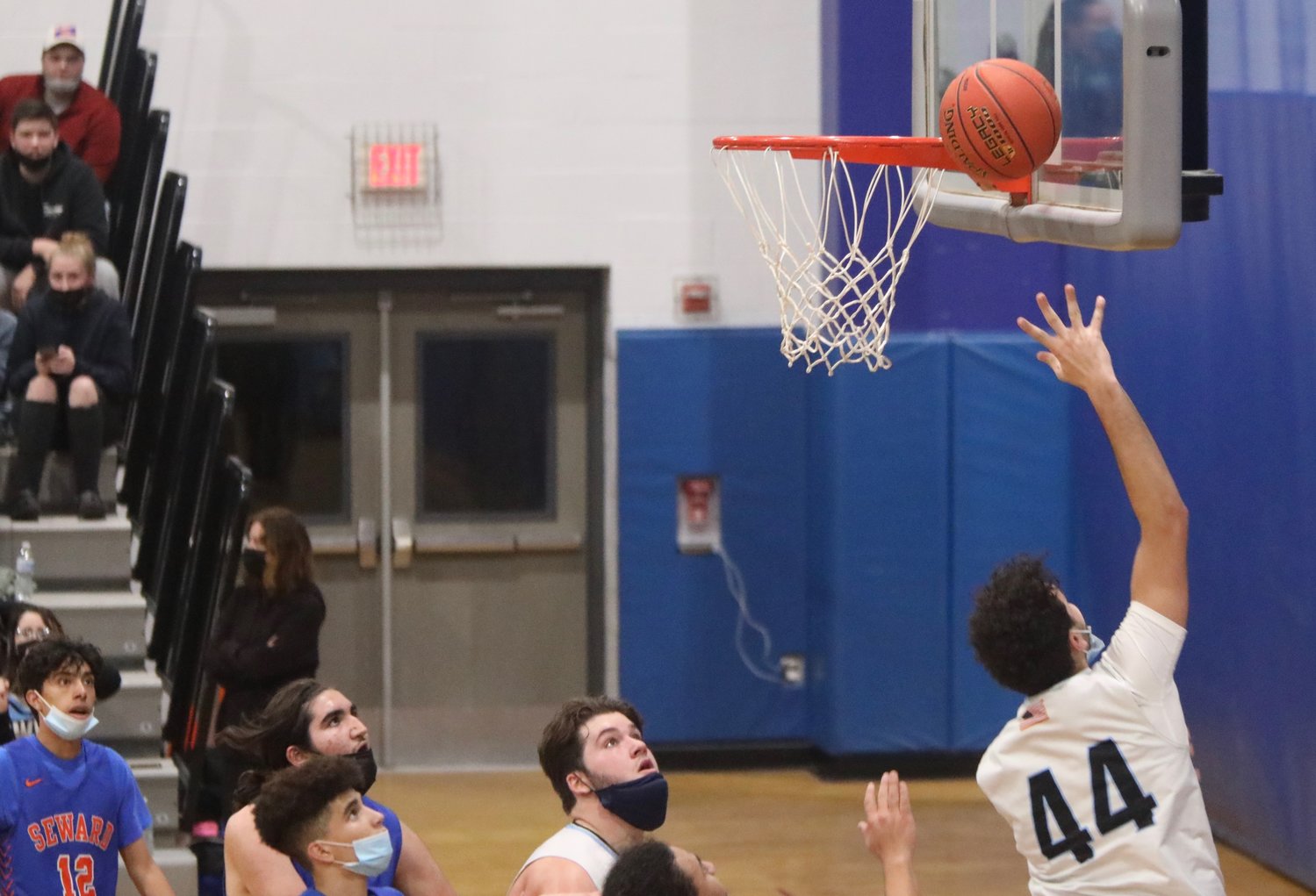 Sullivan West’s Dan Shami goes up for two in the fourth quarter wherein he scored six of his 11 points.
Richard A. Ross | Democrat
https://alpha.creativecirclecdn.com/scdemocrat/original/20220203-142035-IMG_4049.jpg 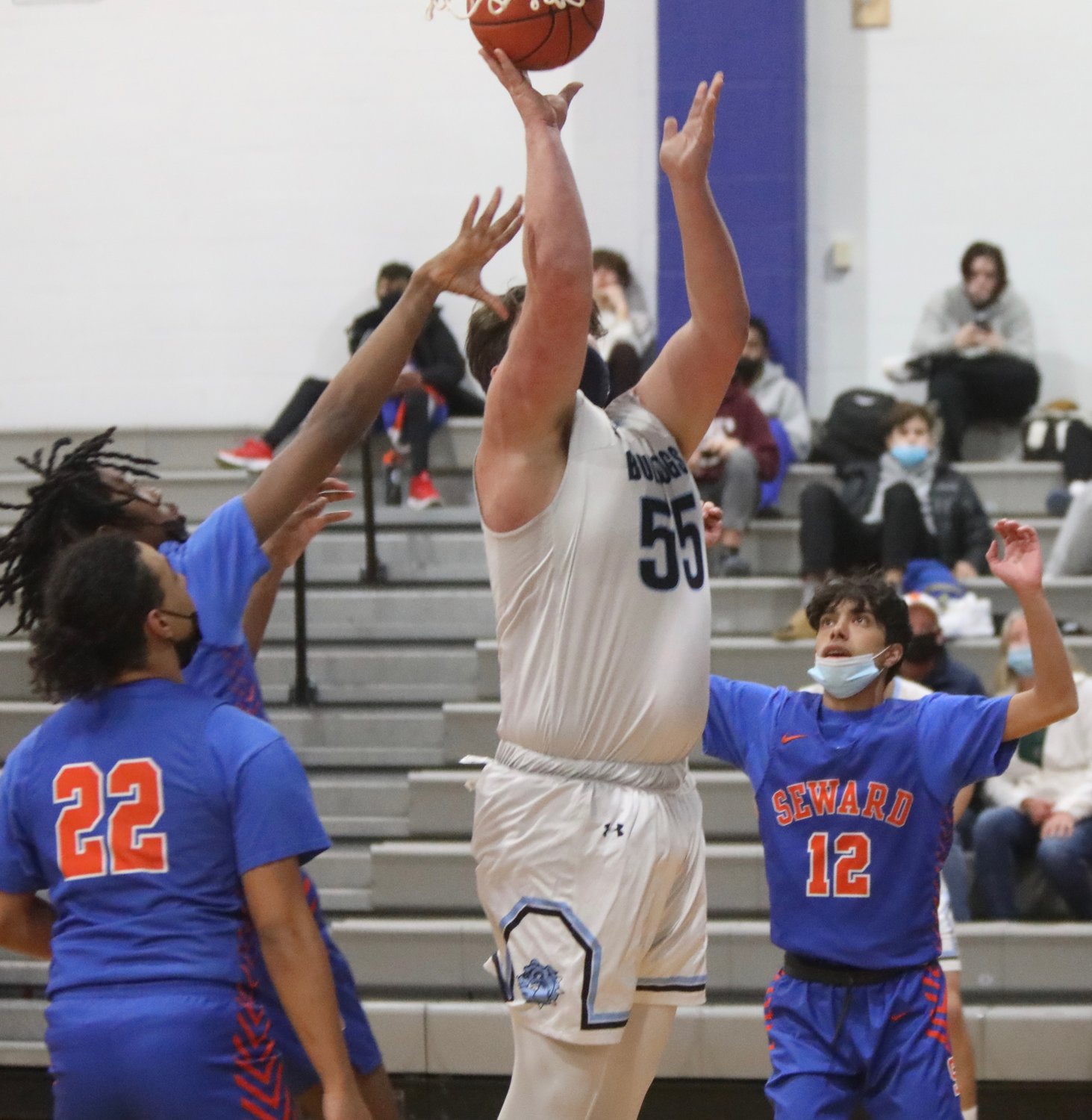 SW senior Chris Campanelli goes up strong in the early going. He ended up with 14 points.
Richard A. Ross | Democrat
Previous Next
Posted Friday, February 4, 2022 6:20 am
Richard A. Ross

LAKE HUNTINGTON - If one were to read the last page of a novel or come in for the final scene of a movie, they could never appreciate all that led up to those endings. The same holds true when people just look at a score from a game. Such was the case in Seward’s 65-62 win. The final score fails to tell the story about the wild game that had just taken place. After a good start that availed the Bulldogs a 13-8 lead after the first quarter by doing what they do best, namely getting the ball down low to Chris Campanelli and Tariq Gambari, a combination of Seward coach Rob Gravelle’s adjusting strategy and some Westie’s mistakes caused the game to turn sharply in Seward’s favor. By the half the Spartans had taken a 27-21 lead, but the roof was yet to fall in on the Dawgs who were about to be outscored in the third to the tune of 20-8.

Turnovers, missed shots, ineffective rebounding and Seward’s speed piled up a lead of 20 at one point. Nick Perez who was just brought up to varsity nine games ago torched SW for 34 points on the night, while veteran Gavin Acuna added 17. That, and a 21-for-32 (66%) fusillade from the stripe accounted for almost all of Seward’s points. Their second leading scorer and biggest post presence Will Shannon was not available, so Gravelle had to retool his lineup. But if this sounds as if this game was all Seward, you had to be there for one of the most furious comebacks imaginable as the Westies poured in 33 points in the fourth quarter to the Spartans 18. It was as if someone had pulled a switch and the previously stumbling Bulldogs came to life with a vengeance.

Point guard Dylan Sager who had not scored all night, lit it up with 12. Tariq Gambari added seven, Dan Shami had six and Matt Dubois came through with a pair of threes. It was right down to the wire in a single possession game when the Dawgs trailed by just three as time ran out.

As SW Coach John Meyer had witnessed Seward’s speed advantage, he had to take Campanelli out to bolster his pursuing defense. Thus, in crunch time, the “big fella” only scored two of his 14 points in the fourth quarter. The disparity in free throws afforded Seward 12 extra points with the Westies canning a lackluster nine-of-21 (43%).

In many ways, basketball is like chess. You try to get an advantage by your moves, but if it isn’t working, you have to make adjustments. Gravelle is a chess master. When asked how SW got that early lead and how he altered things, he noted: “They were doing a good job of recognizing what we were in and making those diagonal passes to score down low. We had started with a half-court diamond trap when we scored and went to a two-three zone when we didn’t. To change things up we started pressing the ball more. We went into a hybrid man zone to bother the ball a bit more so they couldn’t come down and set up. We picked up the ball at the top. On offense, we attacked.” As to Sullivan West’s hyper-charged comeback, Gravelle was not surprised. “They never quit. I’ve been through enough of these wars to know that.”

Sullivan West Coach John Meyer took much of the onus for the loss. “We got away from what we do after some early success. We had a couple of turnovers, and we didn’t adjust to what they were doing. He (Gravelle) is going to adjust and move the ball where he needs to. We could stop them defensively for awhile, but they were dictating the pace and style of the game. We have to defend and not let them just go by our guys.” Meyer saw his team flame on in the fourth. “They played their hearts out and did their best. We just ran out of time. We’ve got to button up things quick. They made foul shots and put some pressure on the ball which we didn’t adjust to well. I had to call some time outs early, and we didn’t have them at the end.”

Meyer believes there is a lot of parity between the teams. “We’re even. He’s got some good players. This loss falls on me. I have to be able to make better adjustments.”

Sullivan West was paced by Gambari with 15, Campanelli with 14, Sager with 12, Shami with 11 and Dubois with 9. Seward improved to 9-5 (2-1), while Sullivan West fell to 7-4 (1-2). A rematch between the two schools scheduled for Thursday, February 3, was postponed due to weather.

Meanwhile, on the other side of the river, Rhinebeck, Millbrook and Pine Plains are careening towards high seeds behind Chester which will most assuredly be the #1 seed.