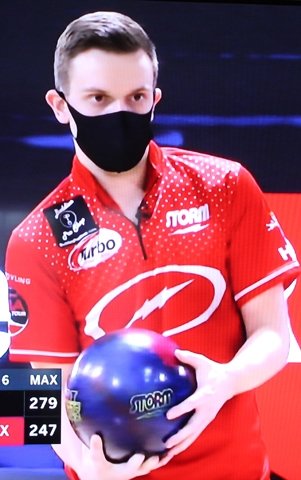 Francois Lavoie is the new champion of the PBA Tournament of Champions.
CONTRIBUTED PHOTO 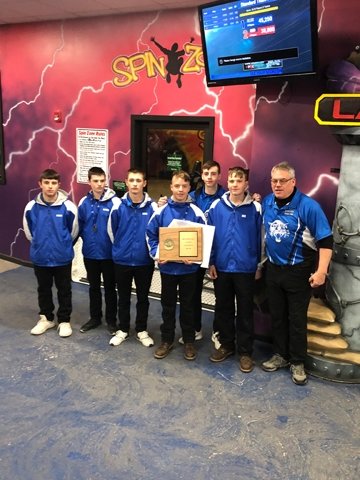 Bowling is the fastest-growing high school sport this decade but no high school in Sullivan County offers this sport which is very popular in Hancock Central just across the county border in Delaware County.

The bowling industry provides more than $6 million in scholarships each year.

“High school bowling has indeed been very tough this year for those participants at Hancock Central, and they deserve a great deal of credit for sticking with it,” Coach Bill Gleim noted.

Hancock Bowling Coach Bill Gleim, proprietor of the Fox Bowling Center, a strong supporter of high school bowling, spends many hours dedicating his coaching knowledge for the youth of his community.

This year Gleim said, “we have held virtual matches, bowling unopposed and with no fans in the building…the seniors were allowed two guests on Senior night…that's it.”

Also this year the Hancock Central (HCS) team had all post season play canceled, no league championships or sectional or state championships.

The pandemic this season has made scheduling a nightmare due to quarantines, the weather and the districts all having different policies and procedures in place for COVID-19.

The HCS team honored the five seniors on the squad during their virtual match vs Green in February. Hancock Central School is graduating four girls on the bowling team this year, Mickayla Norton, Mckenzie Worzel, Julie Roloson and Ellen Mastronardi. Mickey and Kensie are three-time all-stars and have been major factors in multiple league and sectional championships.

Senior Nick Hazen has been on the team since Junior High and has won multiple medals in tournament play throughout his school bowling career and was a major factor in last year's run at a state championship for the boys where he shot a 276 single and a 750 series in the state qualifying tournament only to have a chance at a state title taken away by the COVID-19 shut down before the tournament. Gleim noted that, “this is just another reason these seniors deserve extra recognition for having had to sacrifice so much of their final year in high school.”

The girls team had a slow start but after gaining a full roster they were very competitive. Mckenzie Worzel has second high game and high series in the league with a 280 single and a 674 series and was vying for high average and both her and Mickayla will be first team all-stars in the MAC league.

At the state qualifying tournament for Section IV the boys team was 140 pins down with three games to go and won by almost 200 pins beating all teams in the district both in Class A and B…the Virus shut them down.

Gleim pointed out that the boys will have five starters back again next year and he expects them to “be more motivated than ever, and he noted these guys are always at the lanes practicing.”

Sophomores Anton Leonard, Tyler Allen and Ronnie Ellis “are three of the best bowlers in the league all averaging over 200 while sophomore Peyton Johnson is averaging 193 and junior Shane McAndrew is currently at 189,” Gleim said.

The success of high school bowling at Hancock can surely be credited to coach Bill Gleim for all the time and effort he contributes to this effort.

“It's really special,” said Lavoie of winning an event with such a high caliber of opponents. “I got through the first match against Sean and it wasn't easy, but I got a little more comfortable as it went along. It is the Tournament of Champions, so I wouldn't expect anything less. It was tough but I wouldn't want it any other way.”

In the championship match, Lavoie struck in five of the first six frames, building a lead over Simonsen, who left an 8-10 split in the fourth frame. Simonsen rolled three consecutive strikes after the split, but Lavoie's lead proved to be insurmountable.

“I knew I had a lead halfway through the game, but I wasn't looking at the scores,” said Lavoie. “The last thing I wanted to do was get ahead of myself. Against someone as talented as Anthony, you can never let up until it's mathematically over. I kept telling myself to stay here, stay in the moment and keep doing my thing.”

The 28-year-old Lavoie now has five PBA Tour titles, including three majors, making him performance-eligible for the PBA Hall of Fame.

“That hadn't crossed my mind,” said Lavoie. “It certainly is nice to be in that class of players who are eligible for the Hall of Fame. When I started bowling on Tour, I didn't know if it was going to work out, whether I would be doing this for a while or try something else. I'm really happy with where I am now.”

A two-time U.S. Open champion, Lavoie has now finished in the top five in each of the past three majors dating back to the 2020 PBA World Championship.

“Lately, what's been successful for me is my ability to strategize,” said Lavoie. “I come up with a good game plan and stick to it. If the plan doesn't go exactly as I wanted, I have different options.”

Lavoie becomes the second player, after PBA Players Championship winner Kyle Troup, to qualify for the PBA Super Slam, which will feature all five 2021 major winners and airs April 18 on FOX Broadcast Channel.

The wonderful world of bowling gives bowlers the opportunity to use performance bowling balls.

These balls are made of urethane, urethane with reactive additives, with or without particles.

All performance balls come out of the box with either some degree of matte finish, a compounded finish or polished finish.

When a manufacturer chooses a box finish for a bowling ball, many times it is for shelf appeal. All companies want you to choose their products. What you need to know as a customer is that the cover of your performance ball can be adjusted to best fit your needs.

What does this mean for a customer? To maximize your scoring ability on a given lane condition, the cover stock of your bowling ball should match the lane condition. If your ball is grabbing too early, you will need some polish, if the ball is already polished, use a higher degree of polish, preferable something with a slip agent. This will help you get the ball down the lane with less effort.

The telltale sign of a ball grabbing the lane too soon is when you see the ball start to hook and then it stops hooking. On the other hand, if your ball is skidding too far down the lane, you will need some surface friction on the ball. How much friction you need will depend on your ball speed, rev rate and the amount of oil on the lane. The degree of matte finish could be as little as 4000 or as much as 320.

Reminder…these are adjustments to fine tune your ball reaction. It is up to your Pro Shop professional to help you purchase the ball or balls with the proper core and cover to match both your game and the lane surface on which you bowl. Depending on how serious you are about your bowling, and how many centers you bowl in, you may need more than one ball to help you match the conditions.

And always remember… your equipment should be cleaned each time it is used.