A few days of heavy rain showers have added some welcome volume to our rivers and streams, unusual for the end of August. Midday on Sunday August 30 the Beaverkill at Cooks Falls was flowing at 712 … 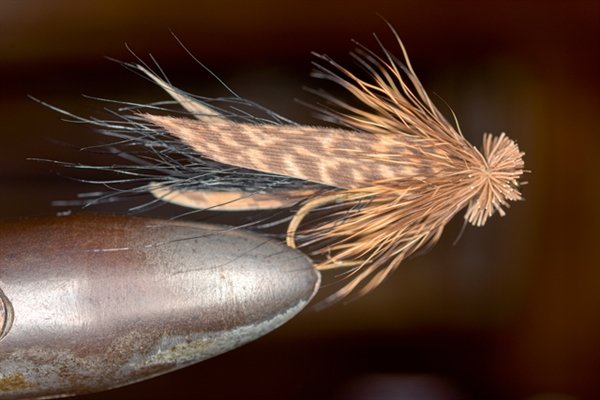 Muddler Minnow streamer fly tied by Harry Darbee. The Muddler is a popular fly to use in higher water during this time of year, as it imitates minnows and young-of-the-year fish.
Photo by Lee Van Put
Posted Monday, August 31, 2020 12:00 am
Judy Van Put - Columnist

A few days of heavy rain showers have added some welcome volume to our rivers and streams, unusual for the end of August. Midday on Sunday August 30 the Beaverkill at Cooks Falls was flowing at 712 cubic feet per second, which is well above the average flow on this date of 119 cfs over 107 years of record-keeping. Water temperatures have also been a bit more favorable, ranging these past several days mostly in the 60s to low 70s.

Higher water levels and lower temperatures are a welcome boost for trout, providing the young-of-the-year and last year's fingerling trout a good opportunity for growth rather than just survival, and can also give a greater chance of survival to older holdover fish.

In addition to a welcome respite for the trout, the higher water enables anglers to fish with 5X tippet, as opposed to the normal late-August low flows that dictate using 6X or 7X.

Hatches to watch for continue to be Light Cahills (sizes #16 and #18), Tricos (sizes #18 and #20) along with Sulphurs and Blue Winged Olives. Don't forget to try ants, beetles and grasshopper imitations; many anglers do well fishing these terrestrials especially after rain showers.

Base your fly selection on the weather; if conditions are rainy and overcast with no flies appearing on the water, fish below the surface with a nymph, wet fly or streamer. As in early spring with high or discolored water, you can sometimes have success fishing a Black Ghost, Black-Nosed Dace or Muddler Minnow.

The Muddler Minnow was created by Don Gapen, of Anoka, Minnesota, in the late 1930s. It was originated to imitate a minnow, a grasshopper, and even a stonefly. The late Dan Bailey, a New Yorker who settled in Montana, popularized the Muddler Minnow and an offshoot, a Maribou Muddler, which is claimed to be very effective on large Montana trout. In addition, the fly is used by those who fish for bass, walleye, and salt water fish in many variations.

Below is the pattern for a Muddler Minnow as tied by the late Catskill fly tier, Harry Darbee. Harry would, at times, use a floatant on a size #10 Muddler as a grasshopper imitation, and even mentioned the Muddler Minnow in a size #10 as one of his eight favorite types of basic dry flies -

“Assuming you want to keep costs to a minimum, begin your inventory with two dozen basic dry flies. Essentially, there are eight types used in American trout streams, and starting with three of each type is a minimum investment with maximum potential….always make sure that a few of the following are in the box: hair-wings, spiders, divided-wings, bivisibles, fan-wings, midges, hair-bodies, and down-wings. These cover nearly all dry-fly problems no matter where you fish. For example, you might select the Grey Wulff, the Blue Dun Spider, Brown Bivisible, Light Cahill, Fan-wing Royal Coachman, Black Midge, Irresistible, and Muddler Minnow to represent the basic eight.” (taken from McClane's Standard Fishing Encyclopedia and International Angling Guide, Holt, Rhinehart and Winston, Inc., 1965.)

Wing: Sparse black bear hair with a strip of speckled brown turkey quill feather at each side

Hackle: A bunch of brown deer hair tied about 2/3 hook length; ends cut off to form a bulky head, tied off, and finished with orange ambroid cement (or any of today's head cement or black lacquer)