As a sure sign of summer in addition to sunny skies and some blazing heat and as a glistening of a return to normalcy, St. Anthony’s of Padua Parish in Yulan will be holding their annual summer … 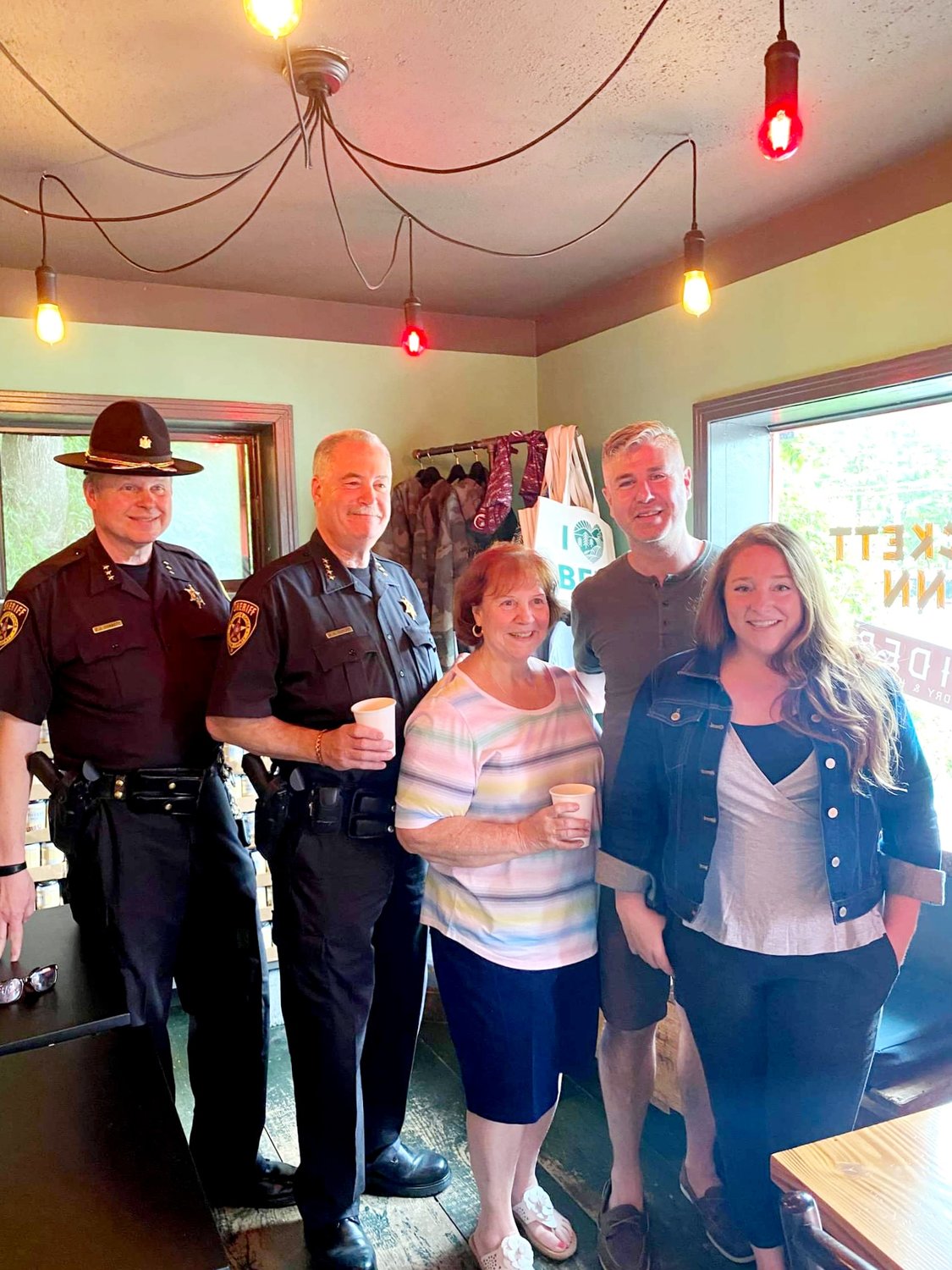 UnderSheriff Eric Chaboty and Sheriff Mike Schiff met with Margie Granese, John Pizzolato and Laura Burrell at the “Coffee With the Sheriff” event at the Stickett Inn in Barryville. Over forty residents of Highland stopped by to meet Sheriff Schiff and speak with him about their public safety concerns.
Contributed Photo | Photo by Paula Campbell
Posted Tuesday, June 22, 2021 7:00 am
Paula Campbell

As a sure sign of summer in addition to sunny skies and some blazing heat and as a glistening of a return to normalcy, St. Anthony’s of Padua Parish in Yulan will be holding their annual summer Chicken BBQ.

The BBQ is one of the Parish’s signature events and will take place on Sunday August 8th from noon to 4:00p.m. In addition to some perfectly cooked half a chicken the dinner includes corn on the cobb, cole slaw, potato salad, baked beans, and dessert.

Because of Covid, the dinner will be take-out only, so there will not be the very popular themed raffle baskets or any door prizes but there will be a 50/50. Tickets for the BBQ are $15.00 for adults and $7.00 for kids twelve years old and under.

The BBQ dinners are limited to a total of two hundred and fifty dinners so it’s best to get your tickets as soon as possible. You can purchase your tickets after any mass at the Church.

Sheriff Mike Schiff and UnderSheriff Eric Chaboty visited Barryville last Saturday with their community outreach program, “Coffee with the Sheriff,” to meet with the residents and give anyone an opportunity to speak directly with him about their public safety concerns.

“No one ever comes to my office to speak with me about their problems, so I have these coffee events as a way for my department to stay in touch and be available to the community” the Sheriff told me. About forty people came and enjoyed coffee and some terrific homemade apple cider donuts at the Stickett Inn in Barryville.

The Sheriff said that most of those he talked with were concerned about drugs which remains a very serious issue in the County, speeding on our roads and the crime rate here in Highland is very low-mostly a burglary here and there.

I spoke with him about the need for a seasonal full traffic light at Route 97 and 55 in Barryville because of the many accidents and speeding, and he agreed to write a letter of support.

The Sheriff said that he has been working closely with Garnet Health to develop new drug treatment protocols to have better treatment options available in the County. “Drugs are an issue that affects so many individuals and families, including my own family, and I know how critical good treatment options are to bring about successful outcomes” he said.

He also expressed his concern about mental health treatment for those incarcerated. “It’s a bad situation with having inadequate mental health resources available within the jail system, it’s hard on the prisoners and on the officers and leads to a lot of problems, and I am trying to address that now with making more resources available he told me. This is Mike Schiff’s fifth time running for Sheriff, and I asked him what he thought has gone right over his last term as Sheriff. He responded probably the biggest factor has been moving into the new building about a year ago which is a much more well equipped and healthy environment to work in and, because of the move, he has spent time reorganizing his department and doing a lot of retraining of his staff. “I drill into their heads that we need to remember “who we are and that is we are public servants” and because of this there aren’t that many complaints against his officers. We have been working our Police Reform and Reinvention Plan which was adopted by the County Legislature in March 2021 to engage the community and address any areas of racial bias and foster a greater sense of trust.

As to his best accomplishments, the Sheriff replied, “I have been able to get good decent equipment and now that we have enough space our training is now a big asset to our department and keeping my staff and officers ready to successfully respond to any situation and have a positive outcome.”

It was good to have the opportunity to catch up with Sheriff Mike Schiff and UnderSheriff Chaboty, and I will follow up with them about the traffic light issue in Barryville.