I have always been amazed that those legacies rooted in our American traditions of honor and service to others seem to endure.

That certainly has been the case with the American Legion Ambulance … 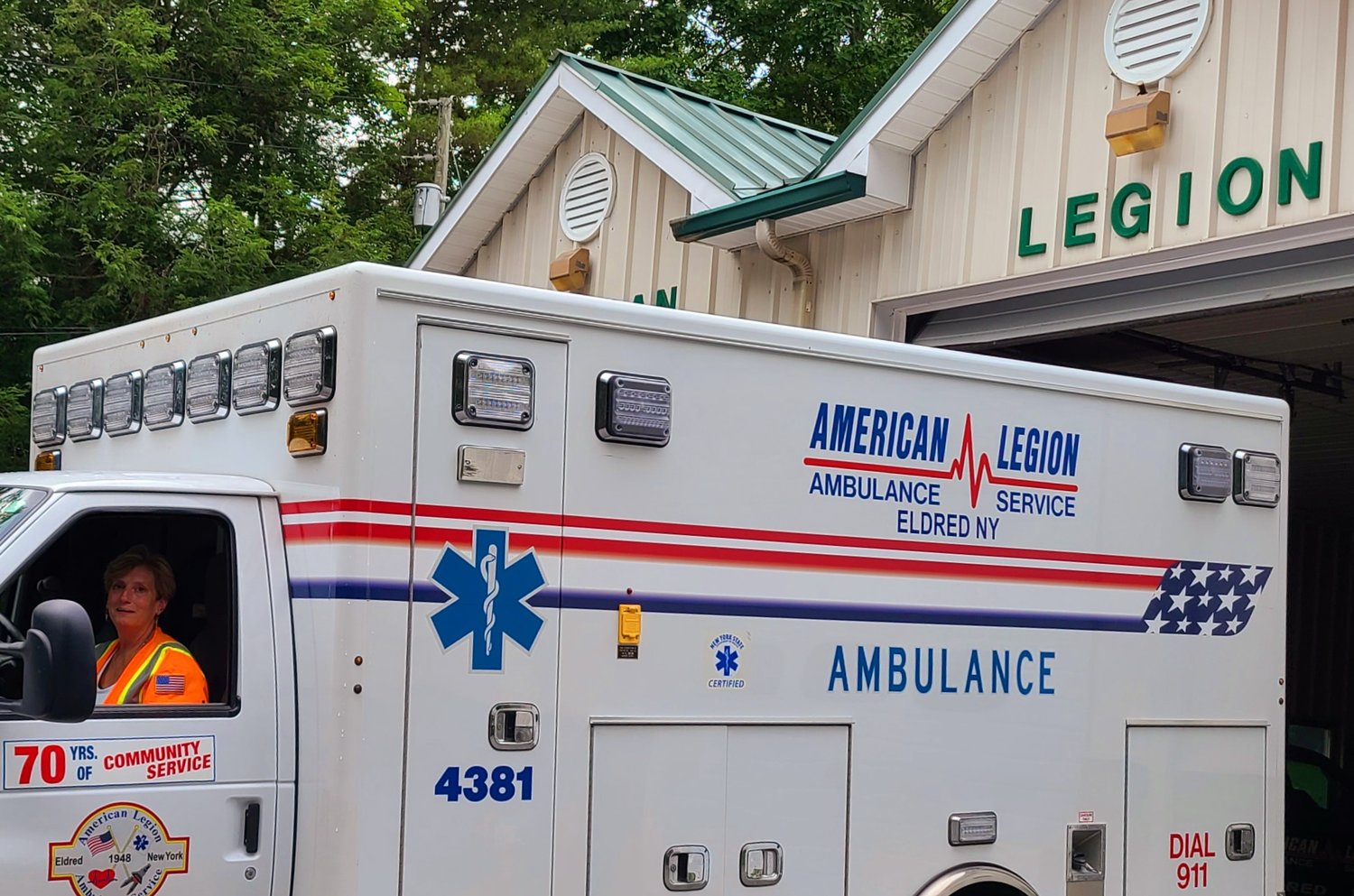 Michelle Cleary of Yulan has volunteered at the American Legion Ambulance Service for over nineteen years. As driver for one of the two ambulances, Michelle has responded to hundreds of calls. She wants everyone to help deal with NYS acute blood shortage and come to the Blood Drive on Saturday, July 24th from 10-3:00pm. at the Highland Town Hall in Eldred.
Paula Campbell | Democrat
Posted Tuesday, July 20, 2021 7:00 am
Paula Campbell

I have always been amazed that those legacies rooted in our American traditions of honor and service to others seem to endure.

That certainly has been the case with the American Legion Ambulance Service. According to Lou Pine the past Commander of the American Legion Post 1363 in times past when there was a medical emergency, they would have to call down to the funeral home in Port Jervis and the owner would change out his hearse to transport people to the hospital.

A group of veterans who were returning from World War II decided that they wanted to continue their service to our community and founded the American Legion Ambulance Service in 1948. The services gets every type of emergency call from car accidents, medical stress, and injuries.

Michelle Cleary, a member for over nineteen years who has responded to hundreds of calls, said that 95-98% of the calls result in a trip to the emergency room. Ms. Cleary said that unfortunately this summer the Service had to respond to several fatal drownings on the Delaware River.

According to Lou Pine “in the thirty-six years of being with the Ambulance Service I never once had to pull a female out of the river and more needs to be done about getting the word out about river safety.”

It was explained that if a visitor at the river camps has a minor injury but is impaired and unable to drive to the emergency room for treatment, the ambulance must take them and then immediately return to the Ambulance garage to put the vehicle back into service ready for the next call. The Service has two fully equipped ambulances and two “fly cars” which are SUVs that are medically equipped and have a defibrillator and oxygen and certified by the NYS Health Department that immediately respond to an emergency call and renders first aid until the ambulance arrives.

According to Lou Pine who has dedicated the past thirty-six years to the success of the American Legion Ambulance Service, for the most part they have the equipment that they need. The oldest ambulance is from 2003 and needs to be reworked and due to the pandemic, some of the supplies they need are not available.

The Ambulance Service facility on Collins Road also serves as one of the Town’s emergency shelters (along with St. Anthony’s Community Center in Yulan) and has a shower, a generator and can sleep about forty people when necessary.

Mr. Pine told me that as of last week the Service has responded to 132 calls and is on track to do an estimated 250 calls for the year- mostly because of all the river-related incidents. The Service by law does third party Insurance billing for people transported to the emergency room and a private company handles the billing.

What can we do to help the Ambulance Service? Lou Pine said they always need volunteers. Right now, the Service has about thirty volunteers, and there is always a need for drivers and Emergency Medical Technicians (EMT). There is EMT training available to become certified. To volunteer you must be available to respond to at least two emergency calls a month.

During the month of October, the Ambulance Service sends out a solicitation letter to all the Town’s homeowners which is an important source of funding. If you do not own your home and wish to donate, you can mail your donation to the American Legion Ambulance Service Post Office Box 63, Eldred NY 12732.

Another very helpful suggestion Lou had is to make sure that your home has a blue and white reflective emergency house number sign- not placed on a tree but near your mailbox by the road-and above any possible snow line.

Michelle Cleary wants to remind everyone that New York State has a critical blood shortage, and she has organized a blood drive for next Saturday, July 24th from 10:00am to 3:00pm at the Highland Town Hall in Eldred. Michelle said she has a goal of collecting twenty blood donations.

If you are over 76 years old and would like to donate blood, you can email mmuniz@vitalant.org to receive an authorization slip. It is very clear that we, as a community, owe Lou Pine (36yrs of service) and Michelle Cleary (19 years of service) and all the other volunteers a debt of gratitude for their dedication to serving our community.

I got a reminder call this week from Pat Newman from St Anthony’s Church and she would like to tell everyone that the deadline to buy tickets to their wonderful BBQ will be Saturday, July 31st for the Takeout only BBQ lunch from noon until 4:00p.m. on Sunday afternoon, August 8th. Tickets can be bought after Mass at the church or by calling Pat at (845) 557-6277 or Barbara Donnelly at (845) 557-8487.