I am so sorry to see that Clancy’s Diner and Ice Cream has closed and apparently for good. When I stopped by, the space has been emptied out. After at least three generations of family members … 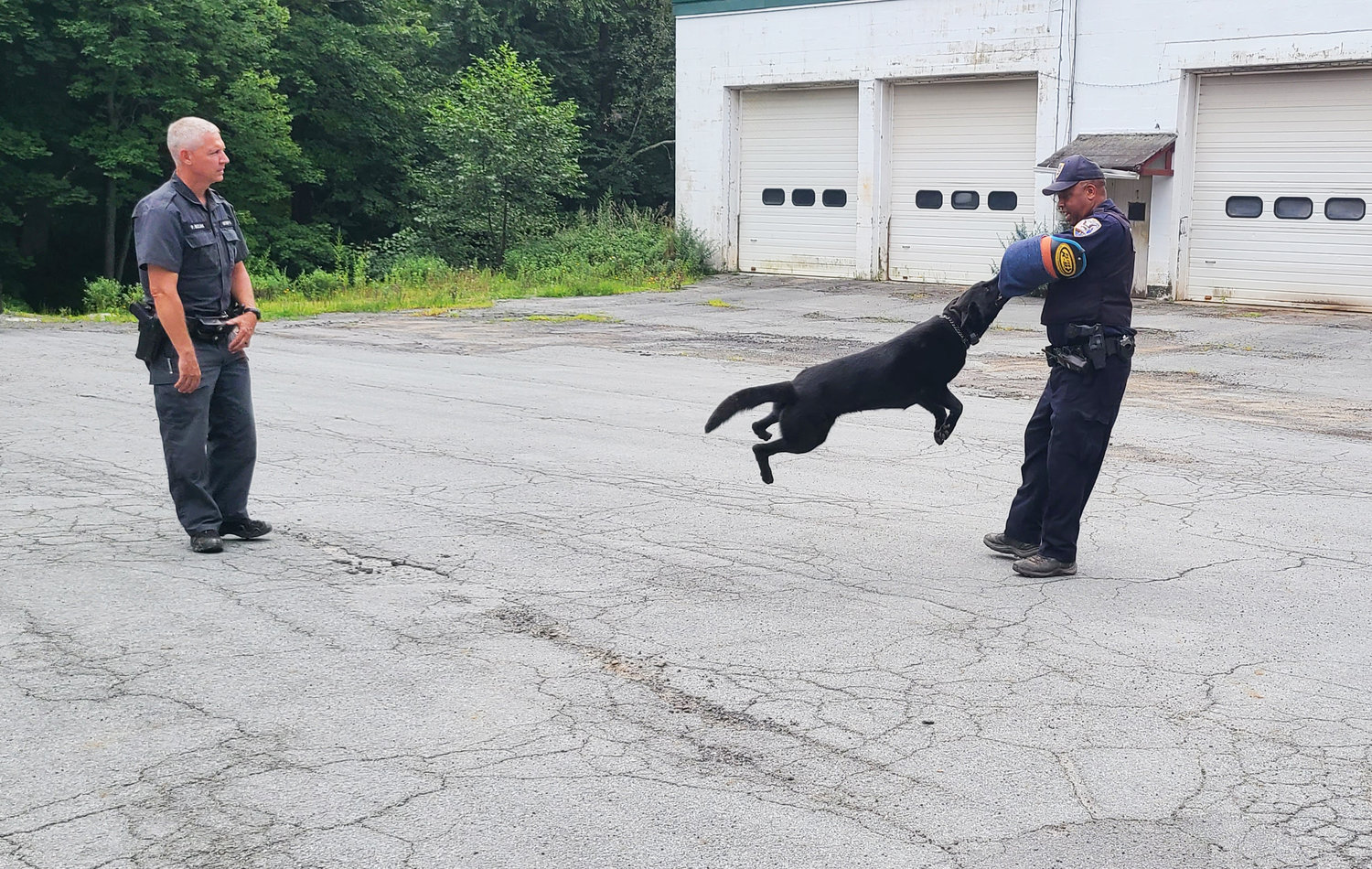 Under the watchful gaze of New York State Trooper Pete Bizjak, long time Town of Highland Constable Marc Anthony demonstrates the power of Trooper Bizjak's K-9 Versa during the recent presentation of NYS Canine Program at the Sunshine Hall Free Library in Eldred. We are happy to report that neither Versa or Officer Anthony were injured during the very impressive demonstration.
Contributed photo
Posted Tuesday, August 24, 2021 7:00 am
Paula Campbell

I am so sorry to see that Clancy’s Diner and Ice Cream has closed and apparently for good. When I stopped by, the space has been emptied out. After at least three generations of family members in ownership of the business, it has ended.

The only warning was a posting on Living in Barryville group on Facebook that the ice cream window was closing on August 8th in the middle of a terrible heatwave. Previously to the closing, I had spoken to Brenda, who is Clancy’s daughter (he is now 92-years-old and going strong) and she told me that after closing during the pandemic, their business was picking up, so I guess we cannot blame everything on Covid.

Clancy’s is in a great spot so maybe someone will come along and open something fabulous there. It just looks bad for the hamlet of Barryville that is getting so many visitors to have three closed businesses. I also heard that the River Market was recently sold, I think as of September 1, and we can expect some wonderful new improvements at the Market.

Speaking of changes and growing pains, we all have seen the bigger than usual influx of visitors, especially along the Delaware River. Our long-time hard-working family restaurants are booming with happy diners.

One of the oldest campgrounds, Kittatinny, was recently purchased by Northgate Resorts the national corporation that owns the Yogi Bear’s Jellystone Parks. In addition to purchasing Kittatinny, they bought a camping and river rafting business in Pennsylvania and another campsite in Lumberland.

In some of these sites an RV camp will be built. Jellystone now has nine local sites and other destination parks in ten other states.

On Route 55 the Eldred Preserve has opened. Also, the five-star luxury retreat built by the International Dream Hotel Group – The Chatwal Lodge and Hotel in the Chapin Estate – which is located on the banks of the Toronto Reservoir Lake.

Then, of course, Bethel Woods is back in operation with a limited number of concerts taking place this summer. In addition to many more people out and about, all these new developments has led to more cars, motorcycles, trucks, buses, commercial vehicles and pedestrians on our roads.

All this is happening around the Route 97 river corridor and has caused problems at the blinking traffic light at the junction of Route 97 and Route 55 in Barryville.

Many drivers, myself included, are unsure as to what they should do at the blinking light, which now has busy four-way traffic.

Last weekend there were two separate traffic accidents in Barryville approaching the light. Over the years, there have been several accidents at the light, and the Town of Highland has passed many resolutions requesting a seasonal full traffic light at the location ­– a similar seasonal light has been installed by the NYS Department of Transportation in Bethel for years. In my conversations with the NYS DOT, I was told they assess traffic conditions every ten years, and three years ago, they sent an Assessment Agent to Barryville during a weekday with a counter. After talking to some elected officials, a wise smart friend suggested I contact Assemblywoman Aileen Gunther which I recently did about getting her assistance in resolving this problem. Over the years, I have found that Ms. Gunther is very in tune with constituents’ complaints and resolving issues in our community, so hopefully she can get us the seasonal traffic light that is needed at the junction of routes 55 and 97. To reach Ms. Gunther’s Office, call 845-794-5807.

I can also report that I recently participated in the Barryville Chamber of Commerce’s Litter Pluck along Route 97, and I picked up many more beer cans and liquor bottles than I did coffee cups.

Kudos go to the Mahogany Ridge Hunting and Fishing Club for the amazing pulled pork sandwich take-out dinner last weekend. I have made pulled pork several times and found it to be just OK. I bought a few tickets and the huge sandwiches featuring homemade Carolina sauce (which I never had before), and the sides and desserts were beyond delicious. Definitely count me in if they have this dinner again next year!