I Love My Library

Did you know that the first week in April the 3rd through April 9th is National Library Week? The designation was founded in 1958 by the American Library Association to honor the work and dedication …

I Love My Library 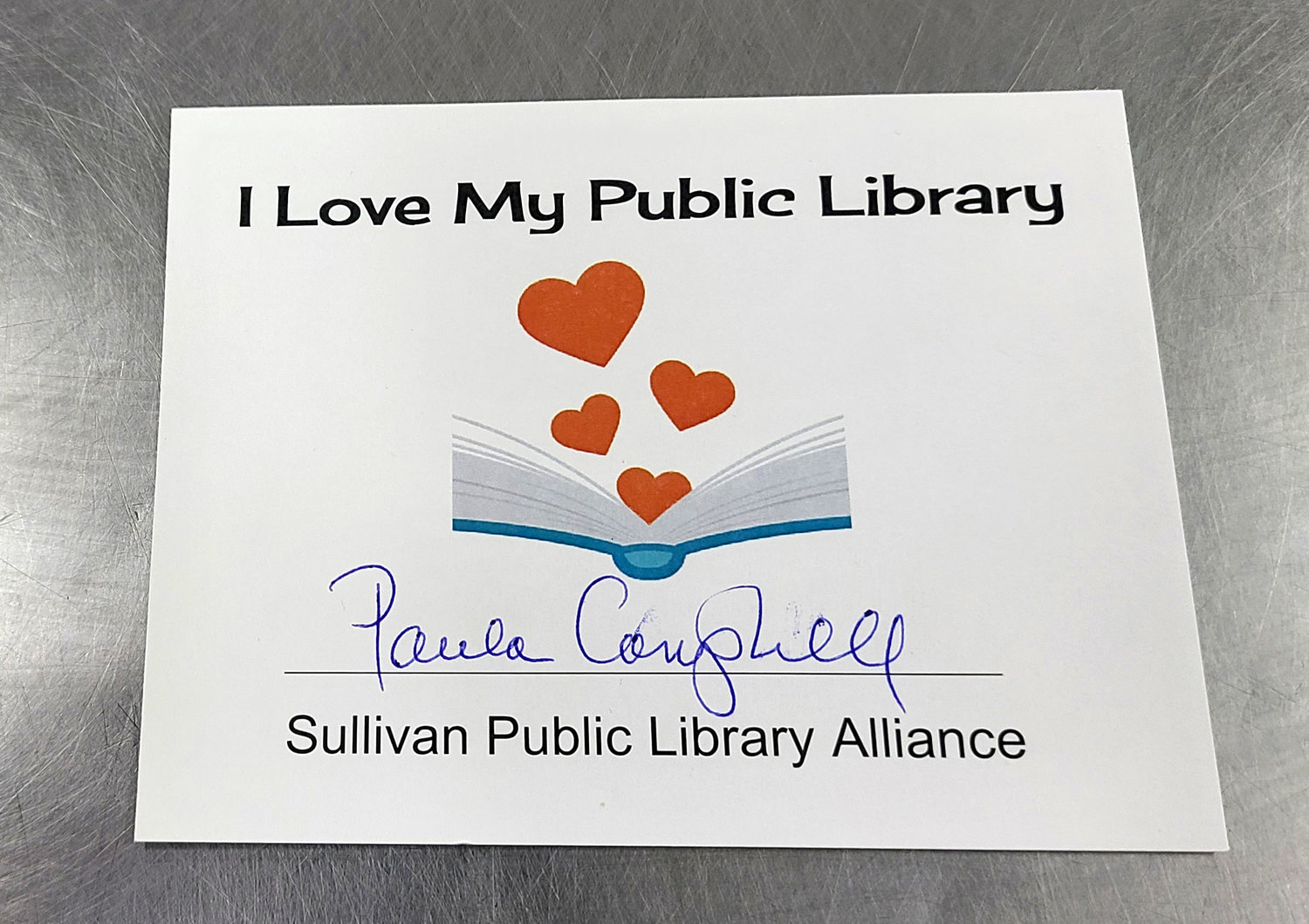 In recognition of National Library Week April 3rd-9th Peck’s Market and the Sullivan County Public Library Alliance are giving shoppers an opportunity to make a donation, in any amount then sign a “I Love My Library” fundraising tag that will be displayed in the local Market. Funds raised will be used by the County’s nine public libraries to underwrite their community programs.
Contributed photo
Posted Tuesday, March 29, 2022 7:00 am
Paula Campbell

Did you know that the first week in April the 3rd through April 9th is National Library Week? The designation was founded in 1958 by the American Library Association to honor the work and dedication of our country’s 116,867 public libraries. It all began with the founding of the first public free library in Darby, Pennsylvania, The Darby Free Library, in 1743 which remains America’s oldest public library still in continuous service.

In our current times where libraries across the country are experiencing an unprecedented spike in censorship attempts, we need to support every librarie’s mission to keep access to information free and available to everyone. As you may know the Town of Highland has a wonderful library, The Sunshine Hall Free Library, which is now 106 years old.

The word “free” is an indication that unlike the first libraries established back in the 1700’s, were subscription libraries and users had to put up a scription fee or a valuable item as surety to borrow a book because books were so prohibitively expensive.

The first subscription library supported by its members was the Library Company of Philadelphia founded in 1731 by Benjamin Franklin. Scottish American businessman and philanthropist Andrew Carnegie built a total of 2,509 libraries between 1883 and 1929 which rapidly grew the nation’s system of free libraries.

Growing up in Boston just about every kid I knew went to the local library at the Brighton Branch every Saturday morning and we returned and then took out new books-I remember the limit was four books at a time. I can remember going to the library close to my house in the care of my older brother Fred clutching my red embossed Cisco Kid combination wallet and billfold that held my library card and little else.

I marveled at my library card being my first official piece of identification. That library had garden plots you could use in the backyard- all for the price of just having a library card. I was hooked and acquired the two greatest joys that sustained me throughout my life -reading books and gardening.

In celebration of National Library Week there is something special happening locally. The Sullivan Public Library Alliance has partnered with Peck’s Markets to give their shoppers an opportunity to show their support for their local libraries by donating in any amount they wish and then signing a “I Love My Library” fundraising tag that will be displayed in the store.

The Peck’s Markets are in Eldred, Callicoon, Jeffersonville and Livingston Manor. All funds raised will be used to support the programs of the nine public libraries in Sullivan County including the Youth Book Festival, the Poet Laureate Project, the 3-D printers that travel around the library system and the Library-By Mail for homebound residents. Please consider donating through this wonderful partnership with Peck’s Market.

For more information go to pecksmarket.shoptocook.com or to sunshinehallfreelibrary.org. As actor and comedian Molly Shannon who is the National Library Week Honorary Chairman said, “Libraries are places where communities connect-to things like broadband, computers, programs and classes, books, movies, video games and more. But most importantly libraries connect us to each other.”

There will be a concert to benefit aid to Ukraine. The Concert for Peace and Healing will feature a musical performance by Cris Spinner. It will be held on Sunday, April 3rd from 4-5:00pm at Michael Ritchie’s Big Barn at 50 Discovery Ridge Road in Hurleyville.

The event is sponsored by the Hurleyville General Store and Kelly Office Systems. To register to attend go to hurleyvillegeneral.com.

If you cannot make the event and would like to donate, you can write a check to CFOS Liberty Rotary and mail it to the Liberty Rotary Post Office, Box 493, Liberty, NY 12754.